4 Image formation on the retina
Retinal image is inverted and reversed. Absence of receptors at optic disc creates blind spot in visual field about 15 degrees temporal to fixation point.

5 Diopter = 1/focal length in meters
Optical defects Myopic eye is too long, focal point is in front of retina. Correct with concave lens. Hyperopic eye is too short, focal point is behind retina. Correct with convex lens. Eye increases in size for 15 years. Refractive errors decease . Studies of experimental myopia in primates and chickens show retina controls growth of sclera and length of eye by detecting image blur. Retina can distinguish hyperopic blur from myopic blur though we can’t perceive difference. Newborn axial length of eye = 17 mm, adult = 24 mm. Diopter = reciprocal of eyeball focal length in meters. For distant object, distance from center of lens and cornea to retinal image is meters. 1/0.017 = 58.8, so optical power of human eye at relaxed state is about 60 diopters. Diopter = 1/focal length in meters Relaxed eye ~ 60 D;

7 Aqueous humor and intraocular pressure
Aqueous humor is formed by ciliary processes and enters the anterior chamber through the pupil. Drains from the eye at the angle of the anterior chamber where it must pass through collection of tissue cords (trabecular meshwork) before entering canal of Schlemm. Intraocular pressure depends on the rate of aqueous production and the resistance to its outflow. Warm entering aqueous is carried upward by convection currents before cooled by cornea.

9 Why is glaucomatous disk so cupped?
Most distinctive feature of glaucoma is deeping and enlargement of optic nerve cup. Occurs even when intraocular pressure (IOC) is normal. Loss of large diameter axons (other optic neuropathies affect mainly small axons) Collagen fibers of sclera form meshwork through with optic nerve must pass. In glaucoma this lamina cribosa bends backwards. Due to defective collagen? IOC? Glia cells do not proliferate to fill gaps, resulting from dead axons, as they do in other inflammatory or ischemic optic neuropathies

10 Accommodation and Presbyopia
Accommodation is the result of ciliary muscle contraction. When ciliary muscle is relaxed, zonular fibers are under tension and pull outward on lens, flattening it. Unaccommodated eye is focused on distant objects. When ciliary muscle contracts, it reduces pull of zonule fibers and lens becomes smaller and thicker. Due to elasticity of lens capsule. Change optical power 8 D. Primary stimulus for accommodation is retinal image blur. Changes in image size and judgements of apparent distance can also act as stimulus. Presbyopia: decreased accommodation amplitude with age. From 14 Diopters at 8 years to 1 D at 50 or 55 yr. No cure. Due to age related loss of elasticity.

11 The lens and cataracts Lens is 90% protein, more than any other tissue in body. Transparency due to: 1) dense, uniform packing of crystallin protein molecules & 2) low water content maintained by ion pumping in epithelium. Lens is formed of concentric layers of long, thin fibers in an elastic capsule. Size of lens and number of fibers increase throughout life. Cataracts are opacities in lens. Can occur at any age but most age related. Cause nearly 50% of blindness worldwide. Multiple risk factors. Dominant cause is UV radiation which alters protein structure. Treat by surgical removal of lens. Aphakic eye severely hyperopic so usually insert plastic or silicone intraocular lens Na-K pumps transports Na inward, K out. Osmotic gradient moves water out of lens. Pump direction reverse of nerve.

13 Age-related Macular Degeneration
Progressive loss of central vision due to gradual degeneration of the photoreceptors. First symptom is usually blurring of central vision when reading. Usually affects both eyes. Most common cause of vision loss in people over 55. Causes of disease are unknown. Candidates include hereditary factors, cardiovascular disease, smoking, light exposure, nutrition—all may play a role. 10% AMD is exudative-neovascular (wet) form. Abnormal growth of blood vessels under macula leak blood into retina and damage photoreceptors. Rapid progression (months). Treat with laser therapy. 90% AMD non-exudative (dry) form. Gradual disappearance of retinal pigment epithelium over period of years. Loss of photoreceptors in affected areas. Patient usually retains some central vision. No treatment is available. Affects six million people in US. There are also some hereditary forms of juvenile MD.

15 Visual pigment Phototransduction begins when a photon is absorbed by visual pigment in a receptor disk. Photopigment contains a light absorbing chromophore, retinal (an aldehyde of vitamin A) coupled with one of several proteins called opsin. Most studies on rods where photopigment is rhodopsin. Absorption of photon by rhodopsin molecule changes it from its 11-cis isomer to all-trans retinal. This triggers a sequence of biochemical events resulting in a receptor potential.

17 Biochemical cascade and light adaptation
Biochemical cascade initiated by photon capture greatly amplifies signal: Estimated that 1 light activated rhodopsin molecule can activate 800 transducin molecules. Each transducin molecule activates only 1 phosphodiesterase molecule but each of these may catalyze breakdown of up to 6 cGMP molecules. In this way absorption of one photon by a single rhodopsin molecule can cause about 200 ion channels to close and change the membrane potential about 1 mV. Light adaptation. Magnitude of amplification varies according to level of illumination. Photoreceptors are most sensitive in dim light, less sensitive in bright light. This prevents them from saturating and extends the range of light intensities over which they can operate. cGMP-gated channels in outer segment are permeable to Ca2+ as well as Na+. As illumination increases, more channels close and intracellular [Ca2+] drops. This decrease triggers changes in phototransduction cascade that reduce sensitivity of receptor to light. Additional factors include neural interactions between photoreceptors and horizontal cells.

19 Renewal of labeled amino acids in rods
Retinitis pigmentosa Common hereditary retinopathy, affects 100,000 people in U.S. RP is group of hereditary eye disorders involving gradual degeneration of the photoreceptors. Main symptoms are night blindness, loss of peripheral vison, narrowing of retinal vessels and migration of pigment from disrupted retinal pigment epithelium into retina where it forms clumps near blood vessels. Progressive death of rods, may be followed by loss of cones Mutation may be X-linked or dominant or recessive autosomal gene. To date mutations identified on 30 genes. Many encode photoreceptor proteins. Pathogenesis is not well understood. Why do cones degenerate? Often protein that RP affects is not expressed in cones, e.g., rhodopsin. Usually visual field deficits begin in mid periphery deg.from fovea—tunnel vision. Normal phagocytosis of sloughed-off rod proteins by long processes of pigment epithelium Dark clumps of pigment in retina Renewal of labeled amino acids in rods

20 Color vision: 3 classes of cones
There are three types of cones with different photopigments that respond to Short, Medium or Long wavelengths. Individual cones are colorblind. Can’t discriminate changes in wavelength from changes in luminance. Color perception depends on comparing activity of ganglion cells from different classes of cones. S M L

21 Color blindness Trichromats (Normal)
Most people can match any color by adjusting the intensity of three superimposed light source producing S, M and L wavelengths About 8% of men and only 0.5% of women are color blind Dichromats Can match colors with only two lights ; don’t see third color category Protanopia– no red cones; x chromosome Deuteranopia– no green cones; x chromosome Tritanopia– no blue cones; chromosome 7 (rare) Anomalous trichromats Red or green gene is replaced by hybrid gene that has intermediate spectral sensitivity. (protanomalous if it is red gene; deuteranomalous if it is green gene that is abnormal) Genes for red and green lie adjacent each other on X chromosome and high degree of sequence homology; probably evolved recently maybe from duplication of single ancestral gene. Purves Neurosci p 248

28 Visual deprivation and amblyopia
Amblyopia is diminished visual acuity due to failure to establish appropriate cortical connections early in life. Strabismus (misalignment of eyes) can cause double vision and is most common cause of amblyopia. In some individuals brain suppresses input from one eye which may become effectively blind. Early surgical correction of extraocular muscle length important. During development, axons of cells in the lateral geniculate compete for synaptic space on cells in visual cortex. This critical developmental period, when cortical synapses are being formed, lasts several years in children. Visual deprivation of one eye during part of the critical period (due to congential cateracts, or amblyopia caused by strabismus) can result in few cortical cells responding to the deprived eye which may become permanently functionally blind. Visual deprivation after the end of the critical period when synapses for both eyes have been established does not affect vision. See Purves pp 568. For example, closing one eye of a kitten during first 3 months abolishes ocular dominance columns in visual cortex. Almost no cells respond to previously closed eye, which is permanently behaviorally blind. Same procedure on adult does not affect cortical dominance columns. In undeveloped tropics millions of people are affected by parasitic eye infections (e.g., ‘river blindness’ caused by a nematode) can cause cateracts or corneal opacity in one or both eyes and blindness, but vision recovers if opacity removed before child is 4 mo

30 Prosopagnosia: inability to identify familiar faces
Lesion of lingual, fusiform and parahippocampal gyri. Right side only or bilateral. Caused by stroke, tumor, demyelination or atrophy. Cannot recognize familiar face. Know face is a face and if sad or happy, but not whether they have seen it before. Cannot learn to recognize new face. Cannot distinguish between members of other classes of objects either. Can tell knife from fork but not different knives, farmer can’t recog individual cows, bird watcher cant identify birds, car buff cant differentiate between models. Bilateral inferior occiptiotemporal lesions

34 Akinetopsia: inability to detect motion
Lesion in visual area V5 (MT) in parieto-occipital cortex which contains neurons sensitive to motion but not orientation or wavelength. Sees moving objects but does not perceive them as in motion. See Trobe neurology of vision p 342. 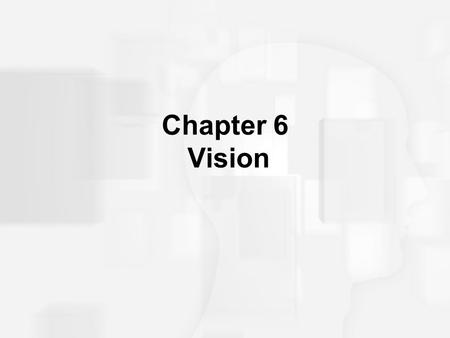 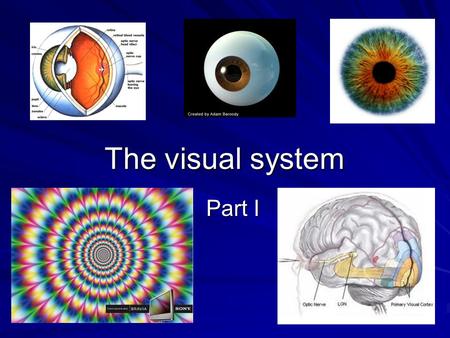 The visual system Part I. 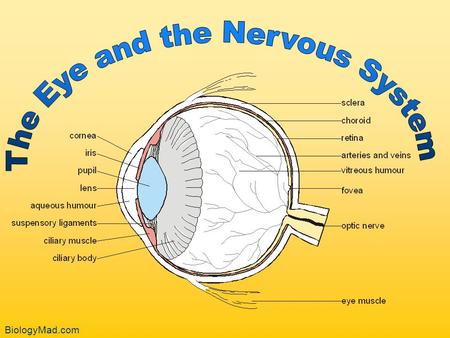 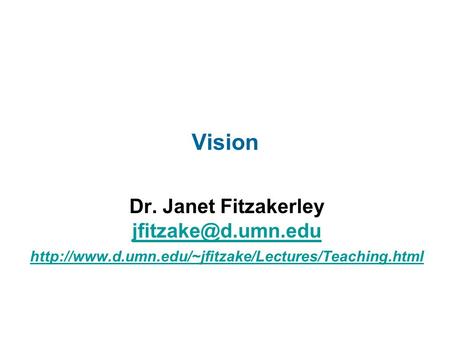 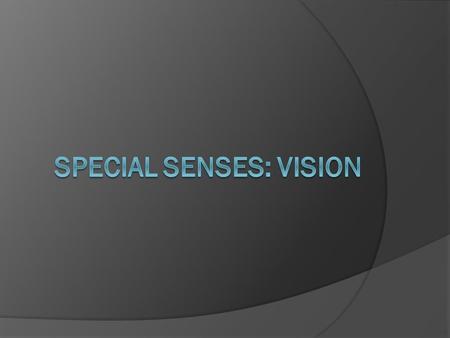 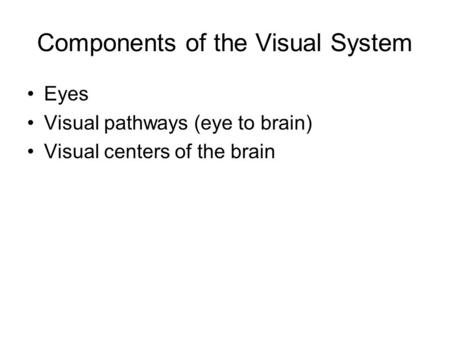 Components of the Visual System Eyes Visual pathways (eye to brain) Visual centers of the brain. 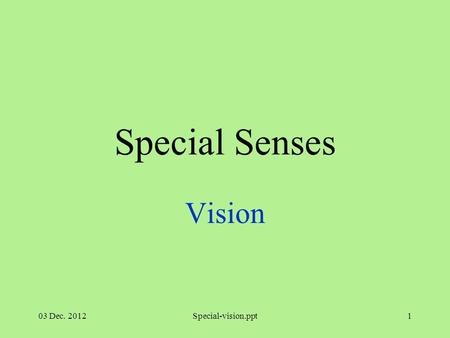 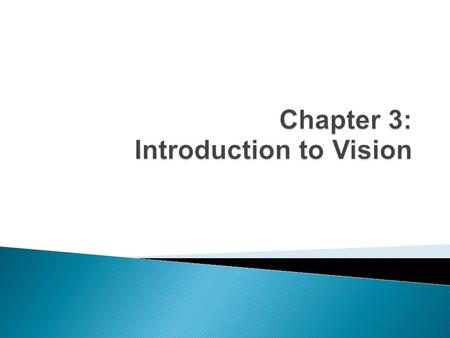  How do our eyes respond to light?  Why do our eyes have two different sets of receptors – rods and cones? 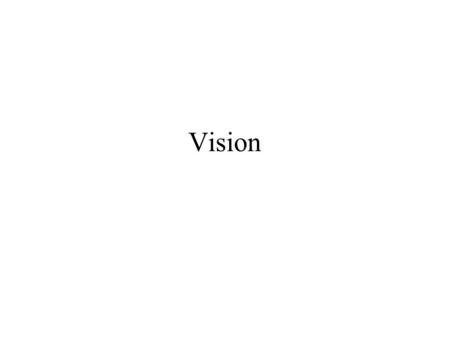 Vision. Three main parts Layer of receptors Lens and cornea system that focuses light on these receptors Nerves that conduct impulses from the receptor. 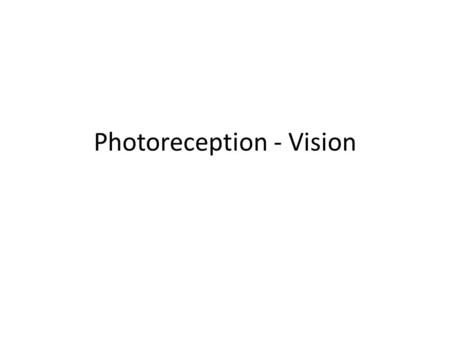 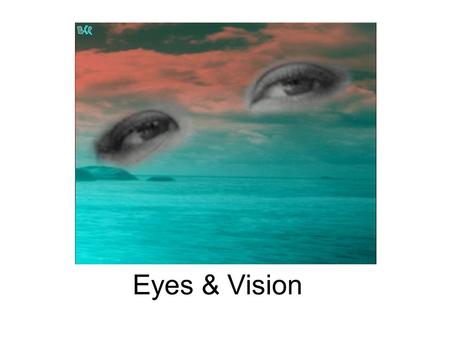 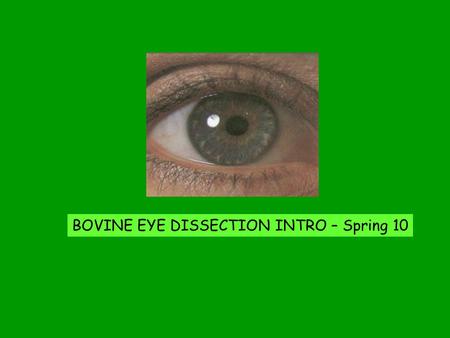 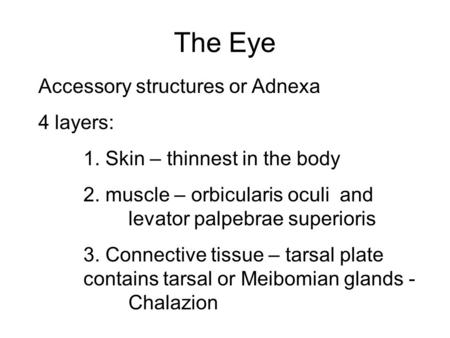 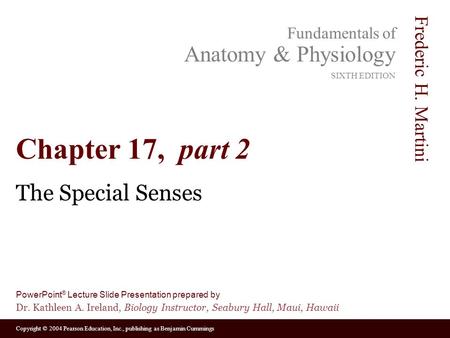 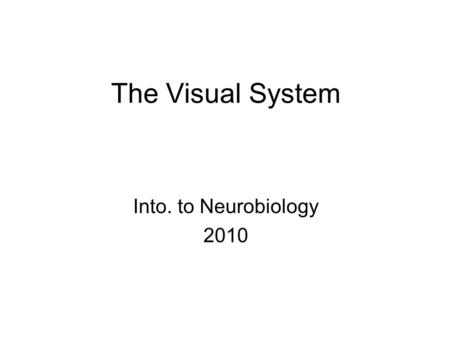 The Visual System Into. to Neurobiology 2010. 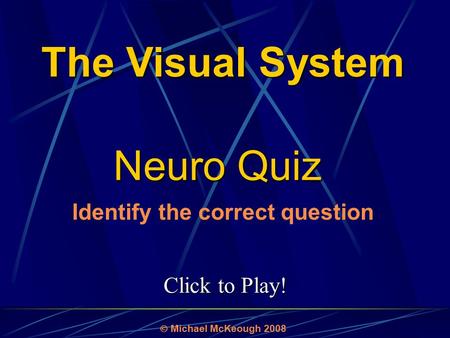 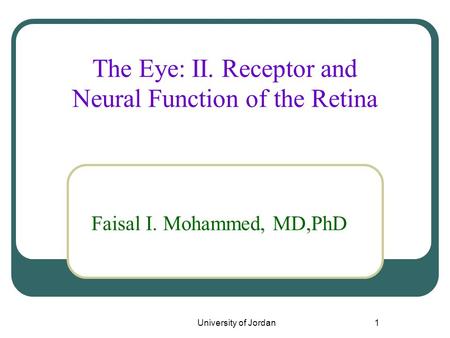 The Eye: II. Receptor and Neural Function of the Retina 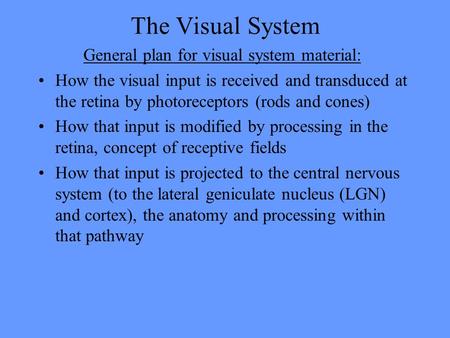 The Visual System General plan for visual system material: How the visual input is received and transduced at the retina by photoreceptors (rods and cones) 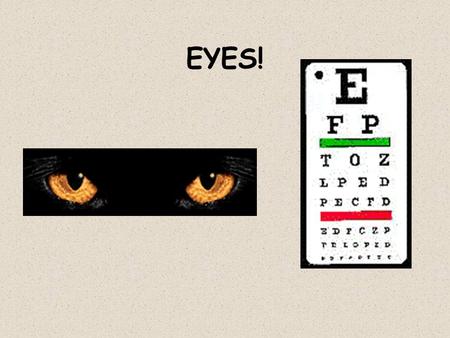 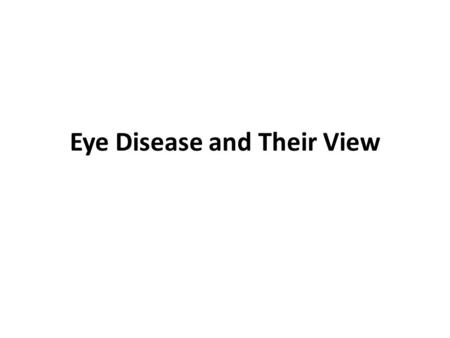