3 Industrialization  By the early 1800’s, changes took place in the Northern states.  Power-driven machinery performed many tasks that were once done by hand.  The industrialization of the North developed in three phases:  1- manufacturers made products by dividing the tasks involved among the workers.  2- manufacturers built factories to bring specialized workers together.  3- factory workers used machinery to perform some of their work.

4 Industrialization  Mass production of cotton textiles began in New England in the early 1800’s with the invention of the sewing machine (Elias Howe).  Machine operators could produce clothing on a large scale.  By 1860 the Northeast’s factories produced at least two-thirds of the countries manufactured goods.

6 Improved Transportation  Improvements in transportation contributed to the success of many of America’s new industries.  Between 1800 and 1850, construction crews built thousands of miles of roads and canals.  The canals opened new shipping routes by connecting many lakes and rivers.  The growth of the railroads in the 1840s and 1850s also helped to speed the flow of goods.  Robert Fulton demonstrated a reliable steamboat that carried goods and passengers more cheaply and quickly along inland waterways.

7 Improved Transportation  In the 1840s canals were widened and deepened to accommodate steamboats.  In the 1840s sailing ships were improved.  The clipper ships – with sleek hulls and tall sails – could sail 300 miles per day, as fast as most steamships of the day.  The ships got their name because they “clipped” time from long journeys.

9 Locomotives  The development of railroads in the United States began with short stretches of tracks that connected mines with nearby rivers.  Peter Cooper designed and built the first American steam locomotive in 1830 called the Tom Thumb.  In 1840 the United States had almost 3,000 miles of railroad track.  By 1860 it had almost 31,000 miles, mostly in the North and the Midwest.  By 1860 a network of railroad track united the Midwest and the East.

10 Moving Goods and People  The development of the east-west canal and the rail network allowed grain, livestock, and dairy products to move directly from the Midwest to the East.  Goods now traveled faster and more cheaply so manufacturers in the East could offer them at lower prices.  The railroads also played an important role in the settlement and industrialization of the Midwest.  As the population of these states grew, new towns and industries developed.

14 McCormick’s Reaper  For hundreds of years, farmers had harvested grain with handheld sickles.  Cyrus McCormick created a reaper that could harvest grain much faster than a hand-operated sickle.  Because farmers could harvest wheat so quickly, they began planting more of it. Growing wheat became profitable.  The thresher quickly separated the grain from the stalk.

16 McCormick’s Reaper  Despite improvements in agriculture the North turned away from farming and increasingly toward industry.  It was difficult making a living farming the rocky soil of New England, but industry flourished in the area.  The number of people who worked in factories continued to rise – so did problems connected with factory labor. 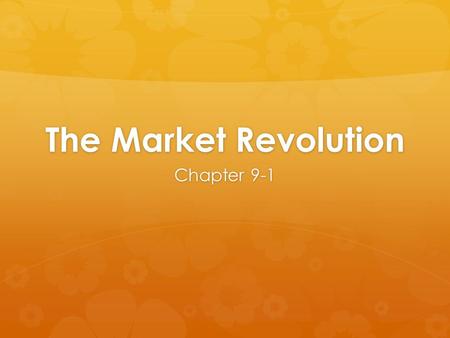