2 A. Republic Collapses As Rome grew its Republican form of government became unstable As Rome grew the gap between rich and poor grew wider Rich landowners owned huge estates where slaves did the work

4 B. Help is on the Way Tiberius & Gaius Gracchus – Brothers who attempt to help the urban poor Upset Roman elites Both brothers met violent deaths Civil war erupted in Rome following their deaths

5 C. Julius Caesar Strong leader and military genius who rose up during the civil war 59 BC – Caesar was elected Consul Following Roman tradition he served one year but declares himself Governor of Gaul (France)

9 D. Caesar’s Reforms Extended the right to vote to many people newly added to the Roman rule Made many reforms to help the poor Created many public works jobs Also created the modern day calendar system (July is named after him)

10 E. Caesar’s Death March 15, 44 BC – Caesar was assassinated by members of the Senate who feared he was becoming too powerful Known as the Ides of March

12 F. Beginning of an Empire Civil war broke out again following Caesar’s death Octavian and Mark Antony joined together and ruled Rome for 10 years Their alliance ends in jealousy and violence

13 G. Octavian vs. Antony Mark Antony met the Egyptian Queen Cleopatra (former wife of Julius Caesar) while leading Roman troops Fell in love and formed an alliance Octavian accused Antony of plotting against Rome and civil war broke out again 31 BC – Octavian is able to defeat the combined forces of Mark Antony and Cleopatra – Battle of Actium

15 H. Pax Romana Octavian became ruler of all Rome Augustus – Title given to Octavian which means the exalted one Pax Romana – 200 year period of Roman peace 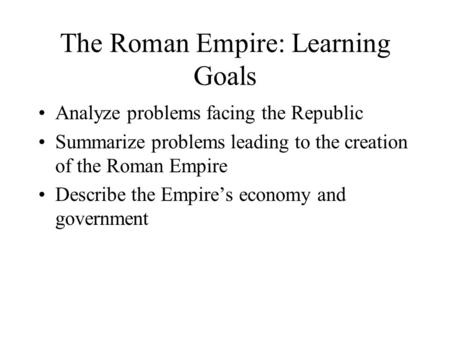