 Lex helps to specify lexical analyzers by specifying regular expression  i/p notation for lex tool is lex language and the tool itself is refered to.

Presentation on theme: " Lex helps to specify lexical analyzers by specifying regular expression  i/p notation for lex tool is lex language and the tool itself is refered to."— Presentation transcript:

2  Lex helps to specify lexical analyzers by specifying regular expression  i/p notation for lex tool is lex language and the tool itself is refered to as lex compiler  Lex compiler transform i/p patterns into transition diagram and generates the code in a file lex.yy.c

4  i/p file is lex.l, describes the lexical analyzer to be generated  lex.l runs through lex compiler to produce a C program lex.yy.c that simulate transition diagram for i/p patterns  lex.yy.c is compiled by C compiler to produce a.out, the working lexical analyzer that can produce stream of tokens from sequence of i/p characters  a.out is a subroutine to parser. It returns an integer, which is a code for one of the possible token names  Attribute value is placed in a global variable yylval, which is shared by lexical analyzer and parser

8  When called by parser, lexical analyzer  Begins reading its remaining i/p until it finds the longest prefix of i/p that matches one of the patterns Pi  Then execute associated action Ai (Typically Ai will return to the parser. If it does not, lexical analyzer proceeds to find additional lexemes until one of the corresponding actions causes a return to the parser)  lexical analyzer returns a single value, token name.  The shared integer variable yylval is used to pass additional information about the lexeme found

11  Int InstallID() { /*function to install lexeme, whose 1 st character is pointed to by yytext, and whose length is yyleng, into the symbol table and returns a pointer to there */ }  Int installNum() {/* similar to InstallID() but puts numerical constants into separate table*/ }

12  The actions taken when id is matched are:  InstallID() is called to place the lexeme found in the symbol table  This function returns a pointer to symbol table, which is placed in global variable yylval, where it can be used by parser or a later component of compiler. installID() has two variables available to it that are set automatically by lexical analyzer generated by Lex: yytext : pointer to beginning of lexeme yyleng: length of lexeme found  token name ID is returned to parser  action taken when lexeme matching number is similar

13  When several prefixes of the i/p match one or more patterns :  Prefer the longest prefix to a shorter prefix e.g: <= to <  If longest possible prefix matches two or more patterns, prefer the pattern listed first in Lex program

14  Lex automatically reads one character ahead of last character that forms the lexeme, and then retract the i/p so the lexeme itself is taken from i/p stream  Sometimes we want certain pattern to be matched to i/p only when it is followed by certain other characters  Use / in the pattern to indicate the end of the part of pattern that matches the lexeme  What follows / is additional pattern that must be matched before we can decide that token in question is seen. What matches second pattern is not part of the lexeme

Download ppt " Lex helps to specify lexical analyzers by specifying regular expression  i/p notation for lex tool is lex language and the tool itself is refered to." 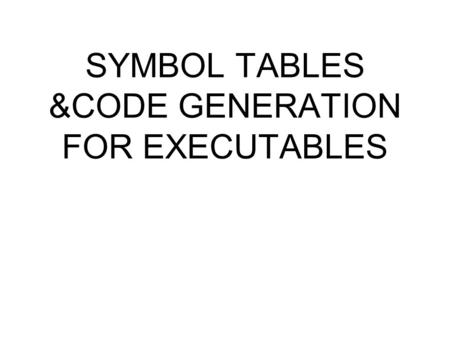 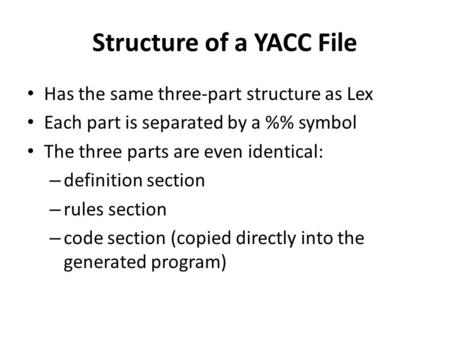 Structure of a YACC File Has the same three-part structure as Lex Each part is separated by a % symbol The three parts are even identical: – definition. 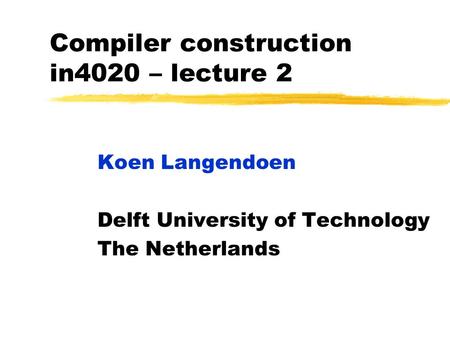 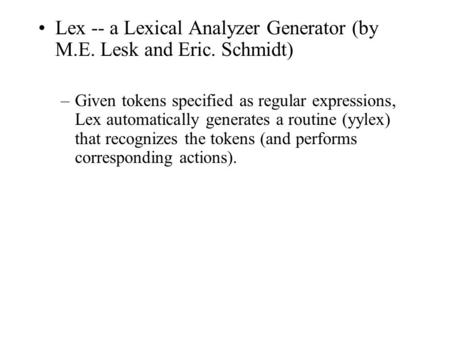 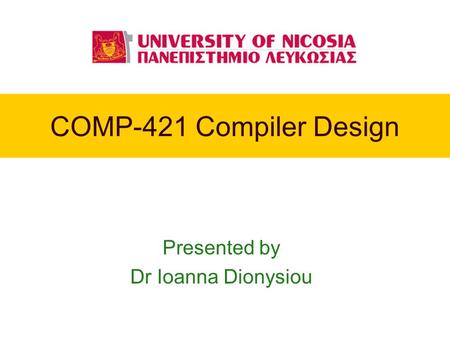 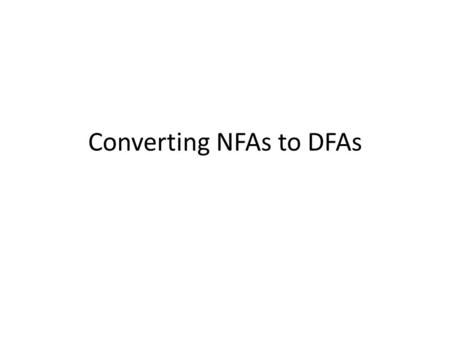 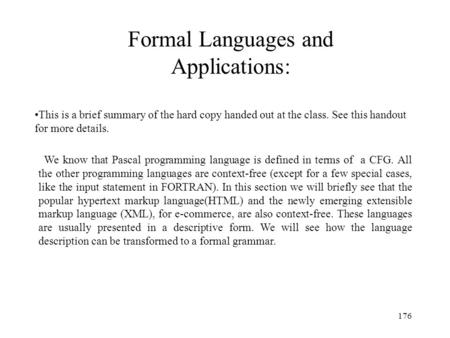 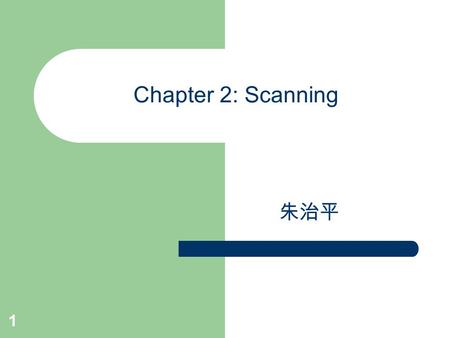 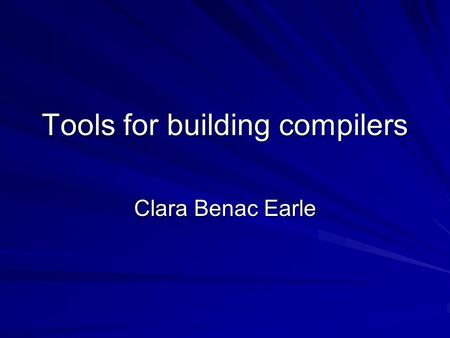 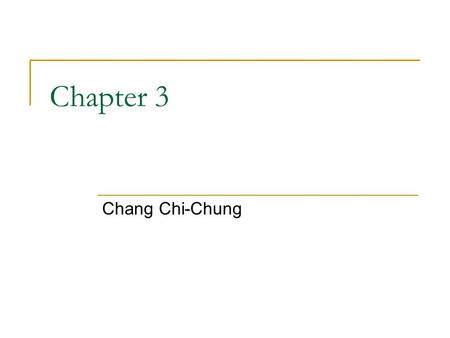 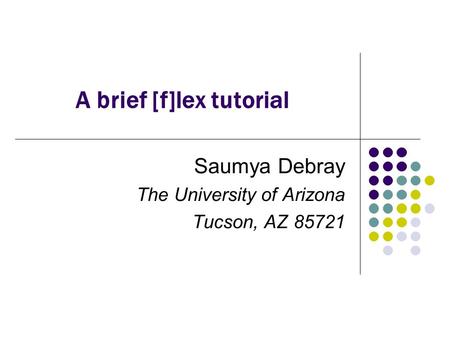 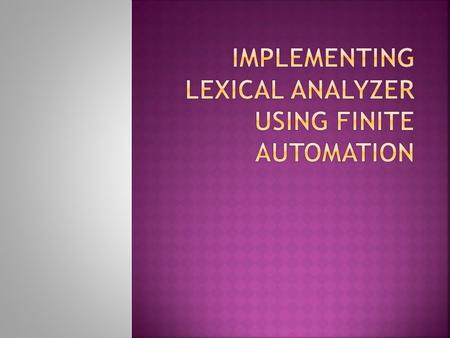 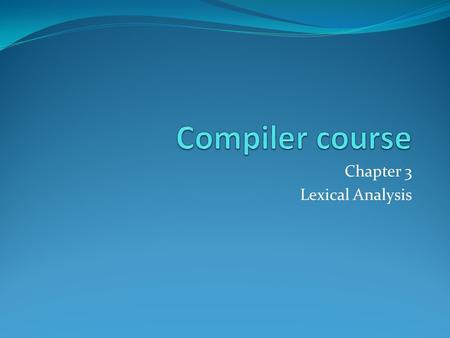 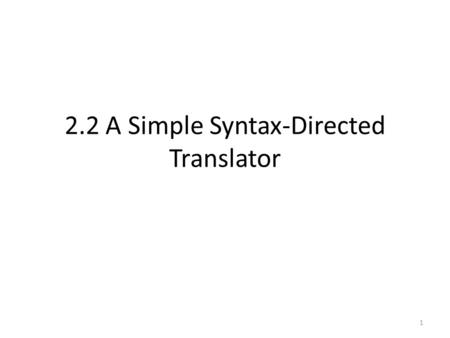 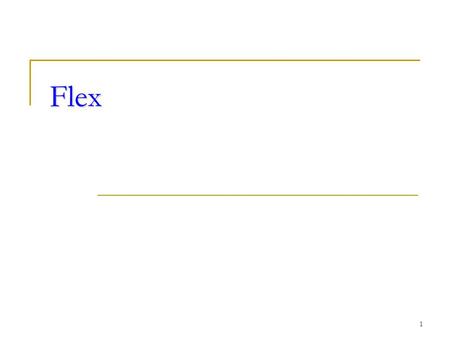 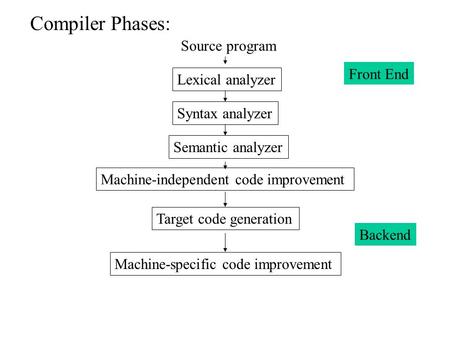 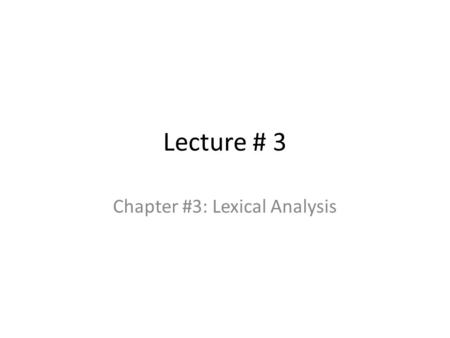 Lecture # 3 Chapter #3: Lexical Analysis. Role of Lexical Analyzer It is the first phase of compiler Its main task is to read the input characters and. 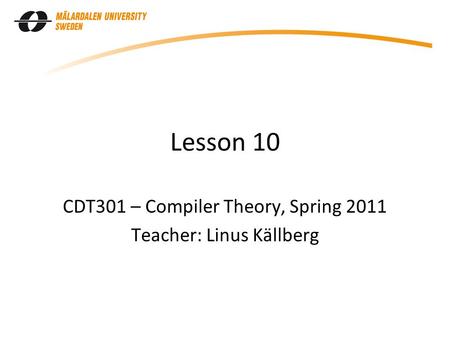 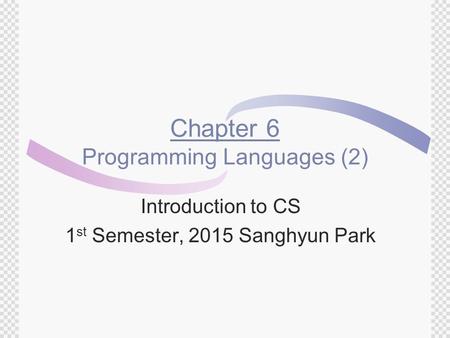 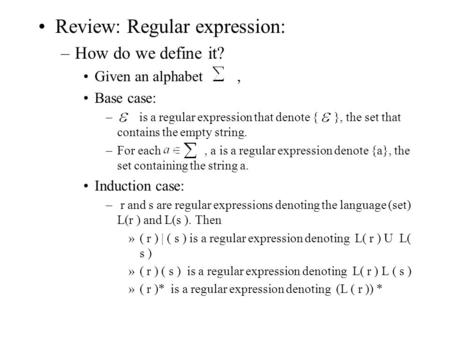