2 Crude Oil Crude oil is a mixture; it contains hundreds of different compounds, some small and some extremely large. Nearly all these compounds contain carbon and hydrogen only and are called hydrocarbons. Hydrocarbons are molecules that contain carbon and hydrogen only. The compounds present in crude oil are separated, processed and purified in an oil refinery. These processes are covered in the following slides.

4 It is difficult to obtain pure compounds from
crude oil so instead, crude oil is separated into groups of compounds called fractions. Each fraction contains compounds of similar boiling point. A description of each fraction is shown below:

11 Alkanes Carbon atoms are unusual in that they are able to form strong covalent bonds to each other. Therefore, carbon is able to form chains of atoms of different length and so make molecules of different size. There are many thousands of molecules containing C-C bonds. In this course you learn about two groups of these compounds, alkanes and alkenes. Alkanes are hydrocarbons (molecules containing carbon and hydrogen only) in which each carbon atom is covalently bonded to four other atoms via 4 single covalent bonds. The other atoms can be either carbon or hydrogen.

19 Cracking The demand for some hydrocarbons is high
and cannot be supplied from fractional distillation alone. To boost the amount of some smaller hydrocarbons produced some of the high boiling point fractions are converted to more useful hydrocarbons. This process is called cracking. Cracking involves breaking C-C bonds. ethene pressure catalyst Distillation tower Heat to vaporise Long alkane smaller alkane

21 CHEMICAL REACTIONS OF ALKANES
Alkanes are generally unreactive. This is because they only contain C-H and C-C bonds. However, the lower members of the series readily combust in air. With plenty of air, the products are water and carbon dioxide only. Methane + oxygen  water + carbon dioxide CH O  2H2O CO2 Combustion with limited amounts of air, however, produces carbon monoxide and water. Carbon monoxide is a poisonous gas.

24 CnH2n Alkenes Alkenes have the general formula
Alkenes are unsaturated because they contain a double C=C bond. In all alkenes at least two carbon atoms are joined to only 3 atoms.

26 CHEMICAL REACTIONS OF ALKENES
The double bond allows alkenes to undergo reactions where atoms are added to the molecule. Thus, alkenes are more reactive than alkanes. An addition reaction: Br2  + If ethene is bubbled through bromine water the solution becomes colourless - this is used as the test for an alkene. Explanation: bromine colours the solution orange, however, this is used up in the reaction and the product is colourless.

32 1. i) How is crude oil split into fractions ii) Name the seven fractions produced by fractional distillation of crude oil. iii) Give three differences between fractions. 2. i) What is meant by cracking? ii) Complete the formula below: C8H18  C2H4 iii) The starting hydrocarbon is octane, name the two products of this reaction. iv) Describe how you could test for the presence of ethene.

33 3. i) Draw the bonding diagram for methane (show only outer shell electrons, carbon has an atomic number of 6). ii) Draw the graphical formula for methane. iii) Methane is saturated, explain what this means. iv) Draw the graphical formula for another alkane containing five carbon atoms. 4. Propane is used as ‘Calor Gas’. Complete the word and equation for its combustion in the plenty of air Propane + Oxygen  _________ + _________ C3H O2  _____ ___ Why is it necessary to combust hydrocarbons in plenty of air?

38 1. i) Crude oil is split into ‘fractions’ of different boiling point by fractional distillation. Here crude oil is vaporised and passed into a fractionating tower. Towards the top of the tower, where it is cooler, compounds of low boiling point condense and are collected on trays from which they are removed. Lower in the tower, higher boiling point fractions are collected. ii) Refinery gas / Petrol or gasoline / Naphtha / Kerosine or paraffin / Diesel / Oil / Bitumen iii) boiling point / viscosity / colour / size of hydrocarbon molecule

39 2. i) Cracking is the process used to convert long hydrocarbon molecules into smaller ones. The hydrocarbon liquid is vaporised and passed over a catalyst. On the surface of the catalyst the carbon chain is split to produce ethene and a smaller alkane. ii) C8H18  C6H14 + C2H4 iii) C6H14 is hexane, C2H4 is ethene iv) You could pass the gas through bromine water. The bromine water, which is orange, will become colourless.

44 7. poly(ethene) n n ethene
Pressure high temperature catalyst n poly(ethene) n ethene This is called addition polymerisation because the molecules of ethene add together without producing any other products. 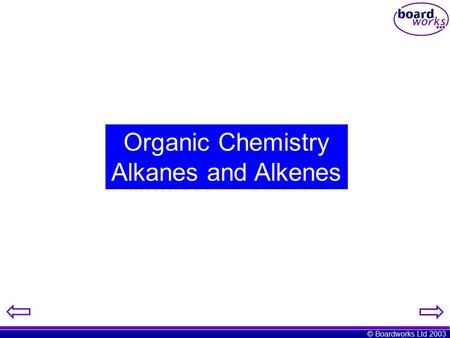 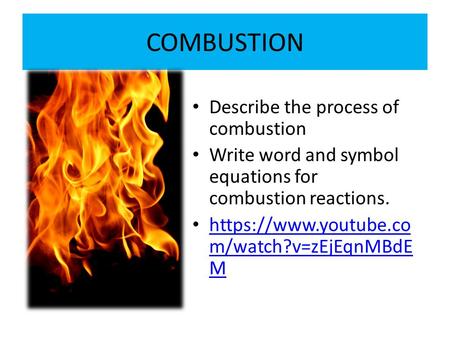