Presentation on theme: "Chapter 11 Introduction to Genetics. Genetics The study of the inheritance of traits."— Presentation transcript:

2 Genetics The study of the inheritance of traits.

3 Gregor Mendel’s Peas 1800’s Austrian Monk that detected patterns in the inherited traits of pea plants. Recognized as the “Father of Genetics” – the study of the inheritance of traits.

8 The Work of Gregor Mendel Mendel decided “factors” that controlled traits were passed on from parent to offspring, and that some of these factors were dominant over others.

10 Law of Dominance For a given trait, some alleles are dominant and others are recessive. When inherited together, the dominant allele will always be expressed over the recessive allele.

12 Law of Segregation Alleles separate (segregate) from each other during the formation of sex cells (gametes). During fertilization, alleles are brought back together (recombination).

14 Probability The segregation and recombination of alleles is random, so probability can be used to predict the outcome of genetic crosses. Probability is the likelihood that a particular event will occur.

15 Punnett Squares Punnett squares use probability to predict the average results of a genetic cross.

21 Beyond Mendel…….. Not all traits follow Mendel’s laws of dominance, segregation and independent assortment.

22 Incomplete Dominance Some alleles are not completely dominant. Skin color and in flowers, petal color is determined by incomplete dominance, and the resulting color is a blend.

23 Codominance Some alleles are codominant; both are fully expredded at the same time. Human blood type and fur color is controlled by codominant alleles.

24 Multiple Alleles Many genes have more than two alleles controlling the trait, however, you can only inherit two of them: one from the mother and one from the father. Human blood type and rabbit coat color.

27 Sexual Reproduction Human body cells have 46 chromosomes. During reproduction, an egg cell is fertilized by a sperm cell, and their chromosomes unite. In producing sex cells, what must be done to the number of chromosomes?

28 Meiosis Meiosis is the process by which sex cells are produced that contain half the normal number of chromosomes.

31 Chromosome Number Cells with only one chromosome from each homologous pair are called haploid (1N) cells Sex cells (gametes) are haploid. In humans, 1N = 23

32 Meiosis Meiosis involves one replication of chromosomes and two divisions of chromosomes. This is how the number gets cut in half.

37 Gene Linkage Genes located on the same chromosome tend to be inherited together. They are “linked”. Ex: in fruit flies, red eyes and miniature wings Ex: in humans, blonde hair and blue eyes

38 Crossing-Over During meiosis when homologous chromosomes pair up (synapsis) sister chromatids may cross-over each other, break and rejoin resulting in new gene linkages. This is known as “crossing-over”.

42 Crossing-over during meiosis separates linked genes. The farther apart the linked genes, the greater the probability they will be separated by crossing-over.

43 Gene Maps The rate at which linked genes are separated can be used to create a gene map of a chromosome. The higher the recombination rate, the farther apart the two genes. In other words, they will assort independently more often than genes located close together.

Download ppt "Chapter 11 Introduction to Genetics. Genetics The study of the inheritance of traits." 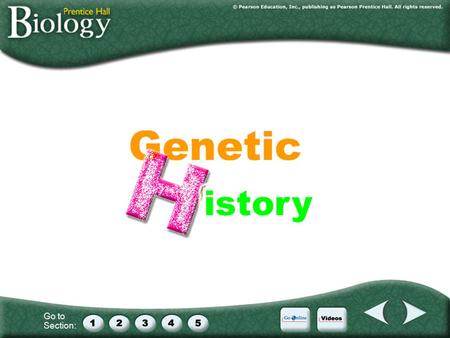 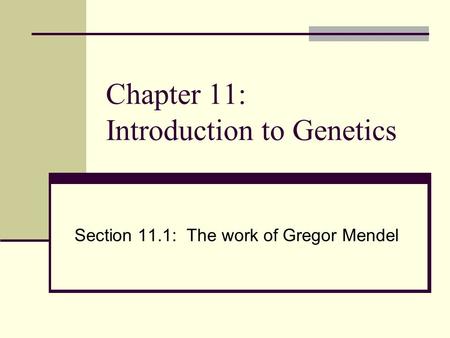 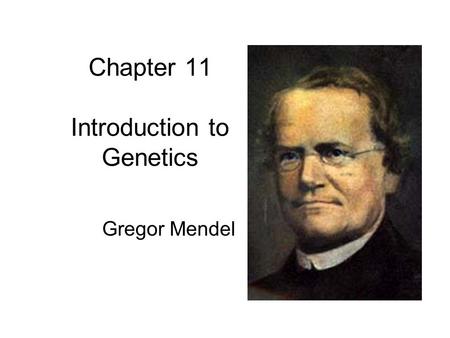