Carbon Chemistry Carbon atoms can form single, double or triple bonds with other carbon atoms. Carbon can form up to 4 bonds This allows carbon atoms to.

1 Carbon Chemistry Carbon atoms can form single, double or triple bonds with other carbon atoms. Carbon can form up to 4 bonds This allows carbon atoms to form long chains, almost unlimited in length.

2 Macromolecules “GIANT MOLECULES”
Made up of thousands of little molecules. Formed from a process known as polymerization, in which large molecules are produced by joining small ones together. The small units (monomers), join together to form large units (polymers) Show beads on a string. And show links on my watch. Together as one they make a macromoleucle

5 Where Do Carbohydrates Come From?
Plants take in Carbon dioxide (CO2) and water (H2O) + heat from the sun and make glucose. C6H12O6

7 Carbohydrate Fancy way of saying sugar.
Carbohydrates are energy packed compounds, that can be broken down quickly by organisms to give them energy. However, the energy supplied by carbohydrates does not last long, and that is why you get hungry every 4 hours. Carbohydrates are also used for structure.

8 Saccharides Scientist use the word saccharides to describe sugars.
If there is only one sugar molecule it is known as a monosaccharide If there are two it is a disaccharide When there are a whole bunch, it is a polysaccharide.

9 Glucose is a monosaccharide
Notice there is only one sugar molecule. Glucose is the main fuel for all living cells. Cells use glucose to do work.

10 Disaccharide Maltose Maltose is an example of a disaccharide
Notice it is two sugar molecules together. Glucose + Glucose = Maltose

11 The most common disaccharide is Sucrose
Sucrose is glucose + fructose and is known as common table sugar.

14 Isomers Glucose C6H12O6 Fructose C6H12O6
Fructose sweeter then glucose because of its structure. Finger tent- put your fingers together to make a tent with your hands. Then, interlock your fingers so that they form x’s at the second joints in your fingers. Now, slide the fingers on your left hand down to the knuckle joints on your right hand. All ten of your fingers are there in this “finger compound”. The “formula” would be two thumbs + two index fingers + tow middle fingers + tow ring fingers + two pinkies. But when you slide your fingers, you are changing the position of them, You are changing the place or space they are occupying. So, although there are 10 fingers altogether and the “formula” of which fingers is unchanged, the way that the fingers exist in space varies. That type of simple difference can make chemicals react differently.

17 Hydrolysis Hydro=water lysis= break apart
Hydrolysis breaks down a disaccharide molecule into its original monosaccharides. Hydrolysis, it means that water splits a compound. When sucrose is added to water, it splits apart into glucose and fructose.

19 However if you do not take in any carbohydrates into your body you will use fat as fuel.
Thank god for the low carb diet. Now, nobody wants to eat me because they think I make them fat.

21 Cellulose The most abundant organic molecule on earth.
Gives trees and plants structure and strength. Most animals can not break the glucose linkage by normal means of hydrolysis. Need special enzymes. We need cellulose (fiber) to keep our digestive tracts clean and healthy.

22 Polysaccharides are used in the shell of crustaceans like crabs and lobsters. Chitin

23 Carbohydrates also serve as structural elements.
The chains sticking out of the proteins in the cell membrane are polysaccharides know as cell markers.

24 How Sweet It Is Sucrose taste sweet but so does equal.
Sucrose is made of sugars Equal is made of amino acids linked together it taste sweet also, so what is going on here. The human tongue has four basic taste qualities. Bitter Salty Sour Sweet We perceive taste qualities when receptors on our tongue send a message to our brain.

25 Its all about how tightly the molecules fit into the receptors on the tongue.
The chemical structure of a compound determines its shape, which in turn will determine how well it will fit into a receptor. Compounds that bind more tightly to “sweet” taste receptors send stronger “sweet” messages to the brain.

Download ppt "Carbon Chemistry Carbon atoms can form single, double or triple bonds with other carbon atoms. Carbon can form up to 4 bonds This allows carbon atoms to." 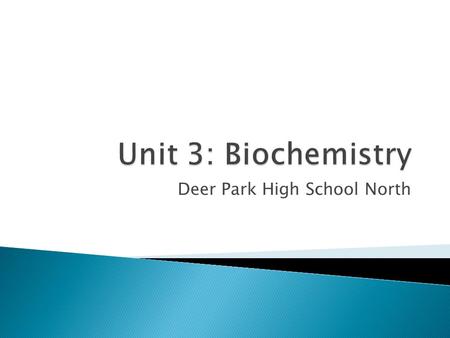 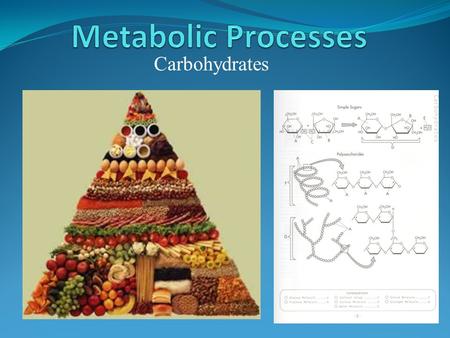 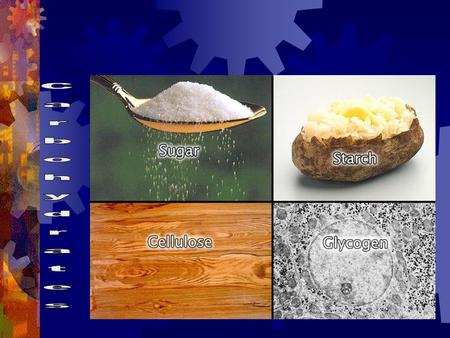 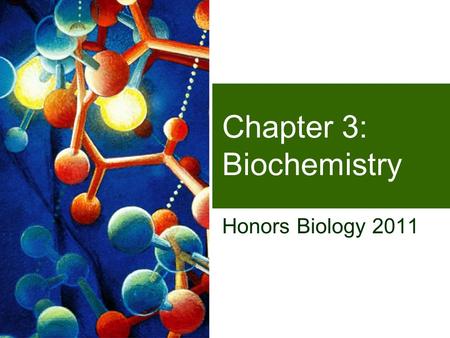 Chapter 3: Biochemistry Honors Biology 2011 What are we made of? Why do we have to eat? 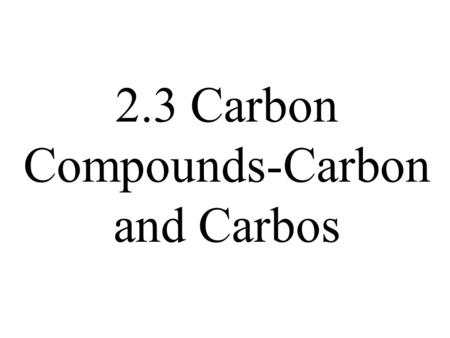 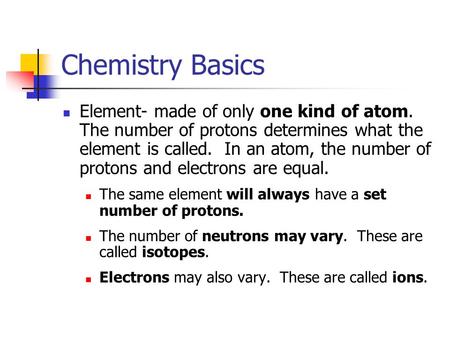 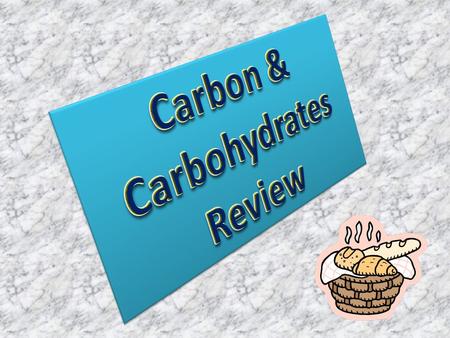 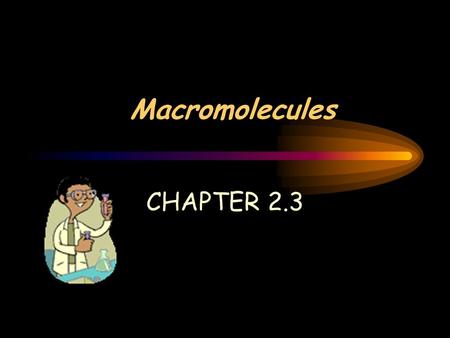 Macromolecules CHAPTER 2.3. SECTION 2-1: THE NATURE OF MATTER REMEMBER… Atoms are made up of electrons (-), neutrons (neutral), and protons (+) Proton. 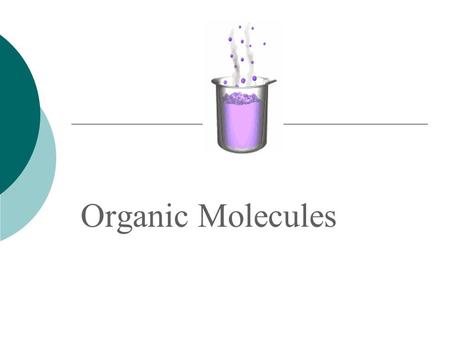 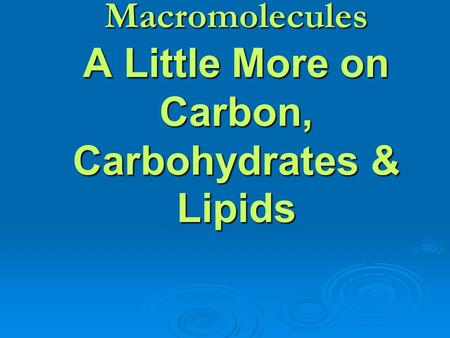 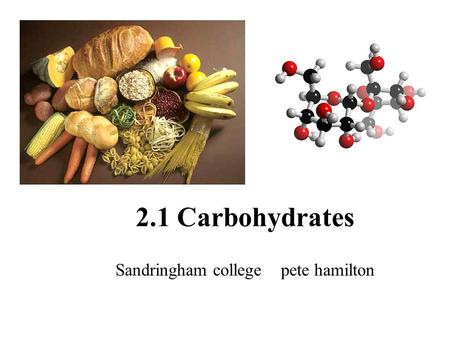 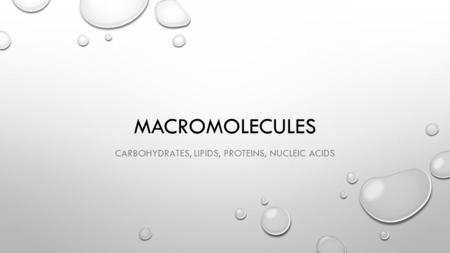 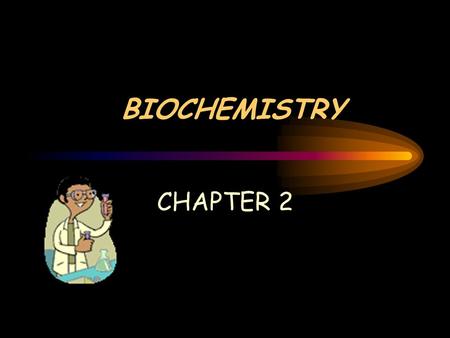 BIOCHEMISTRY CHAPTER 2. SECTION 2-1: THE NATURE OF MATTER REMEMBER… Atoms are made up of electrons (-), neutrons (neutral), and protons (+) Proton number. 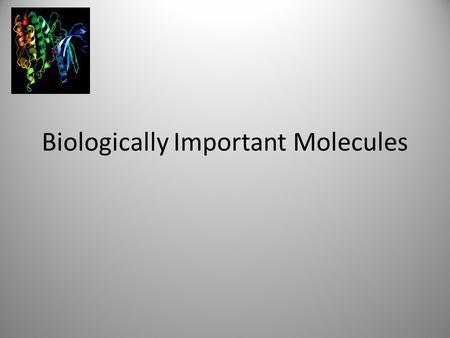 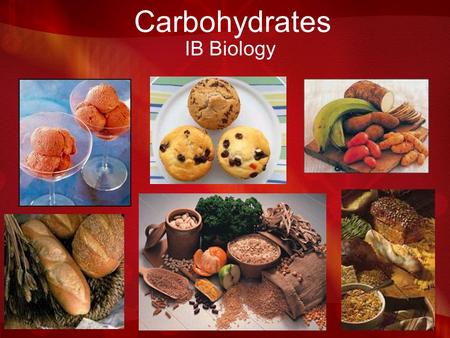 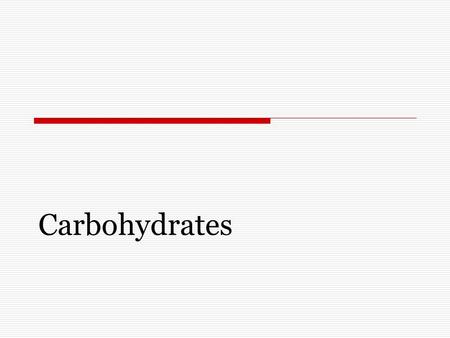 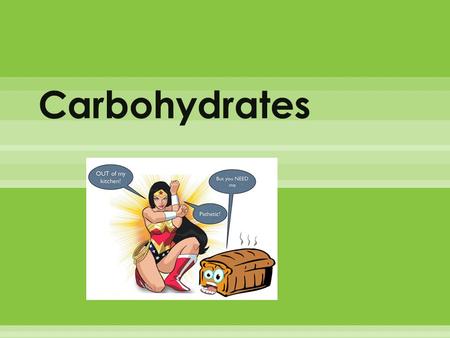 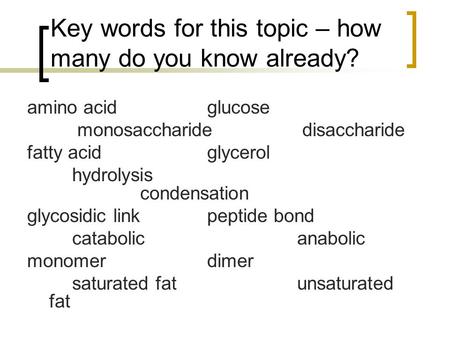