Chapter 12: Solutions Solutions are homogeneous mixtures consisting of a solute and solvent. Not all solutions are liquids! A solution can be a solid,

1 Chapter 12: Solutions Solutions are homogeneous mixtures consisting of a solute and solvent. Not all solutions are liquids! A solution can be a solid, liquid, or a gas.

4 Solution Process As an ionic compound dissolves in water, the ions are surrounded by six water molecules.

6 Solution Process Energy of solution formation for ionic compounds has two factors. Factor One: Lattice energy of ionic compound. Factor Two: Ion-dipole force formed between water and ions. Which one requires energy? Which one produces energy? NH4NO3(s) and MgSO4(s)

7 Ion-Dipole Force Intermolecular force between water and ion is called the Ion-Dipole force. Hydration energy = combined interactions of all six waters with the ion.

13 Spontaneity Both CCl4 and C6H14 are non-polar molecules with similar boiling points. Adding the two together will produce a solution increasing the entropy of the system.

17 Molecular Compounds Molecular compounds will dissolve in water IF they are polar or have hydrogen bonding. CH3CH2OH, CH3CHO Size, though matters! CH3CH2CH2CH2CH2CH2OH W14, #1 Vitamins

19 Saturated Solutions When more solid solute is added to a liquid and the solid does NOT dissolve, the solution is said to be saturated. Solubility limit = maximum amount solute that can be dissolved in a given quantity of solvent. KNO3 = 36g / 100mL. Super-saturated solution.

21 Temperature Effects The solubility limits of most solid solutes INCREASES with increasing temperature.

22 Temperature Effects The solubility of ALL gases decreases with an increase in temperature. Can have an adverse reaction in ponds and lakes in the hot summer months.

26 Colligative Properties
Why do we put “salt” on our roads in the winter? Why do we add “antifreeze” to the radiator in our cars? Can we reduce the vapor pressure of “volatile” liquids? Yes!

27 Colligative Properties
Any property that depends only on the quantity of solute particles and not their identity. Vapor Pressure lowering Freezing-pt depression Boiling-pt elevation Osmotic Pressure

32 Osmosis In biological systems, the cellular walls are made up of cellulose. Cellulose allows water molecules to pass in and out of the cells. Larger molecules or ions are generally “blocked” from entering. Note: glucose is transported into the cells via a complex process.

34 Osmosis This is important in maintaining water in our cells.

36 Molar Masses Many experiments involving colligative properties can find a molar mass of a solute. Generally, this requires us to work backwards through several formulas.

37 Ionic Solutes Because ionic solutes break apart into ions, an adjustment to our formulas must be made. i = van’t Hoff factor. Equals the number of ions per formula unit. True factor depends on the concentration. As the concentration increases, i becomes less than predicted. Why?

39 Ionic Solutes Assume “ideal” values for each electrolyte.
Becomes multiplier in all formulas. What is i for: CaCl2 Na2CO3 Al(NO3)3 NH3

40 Colloids When larger solute particles remain suspended in a solution, they form a colloid. Colloids will exhibit the Tyndall Effect due to the larger particles.

Download ppt "Chapter 12: Solutions Solutions are homogeneous mixtures consisting of a solute and solvent. Not all solutions are liquids! A solution can be a solid," 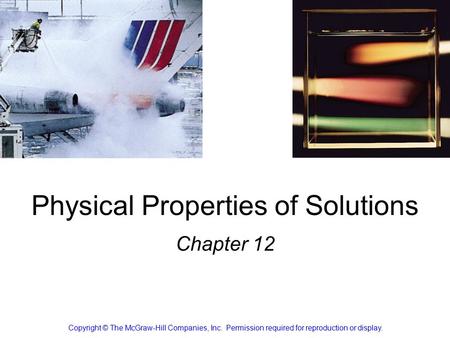 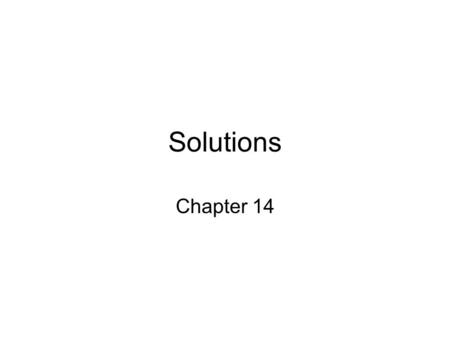 Solutions Chapter 14. Key concepts 1.Understand the solvation process at the molecular level. 2.Be able to qualitatively describe energy changes during. 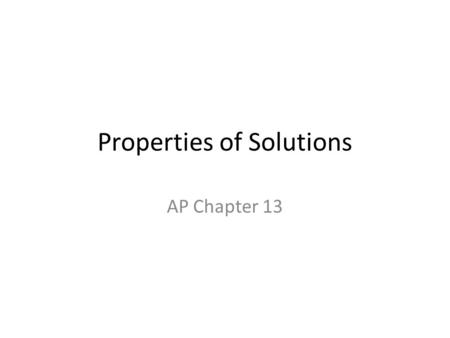 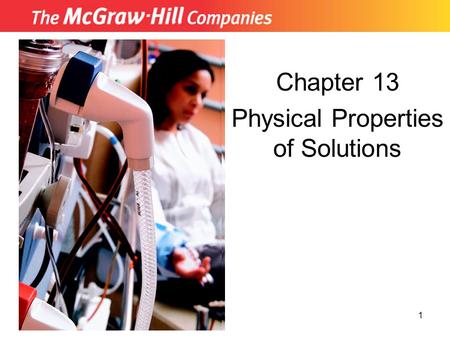 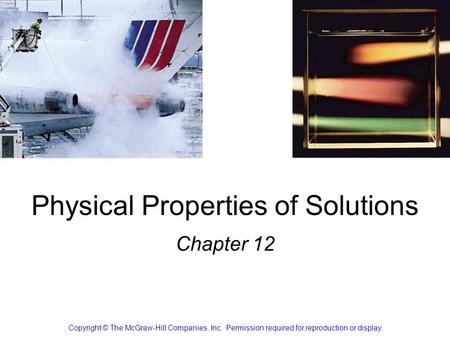 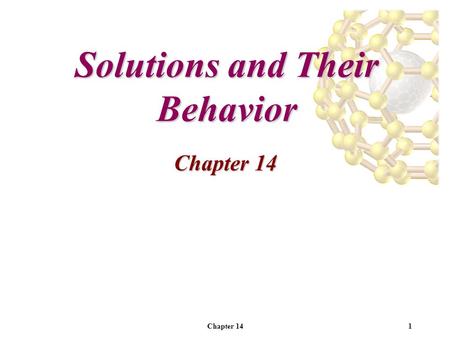 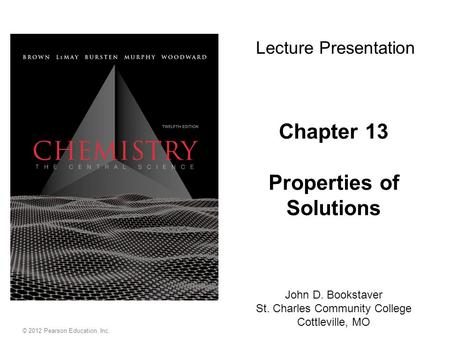 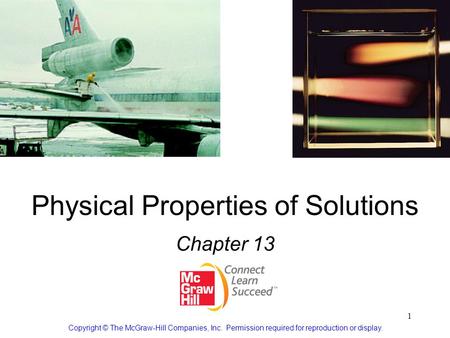 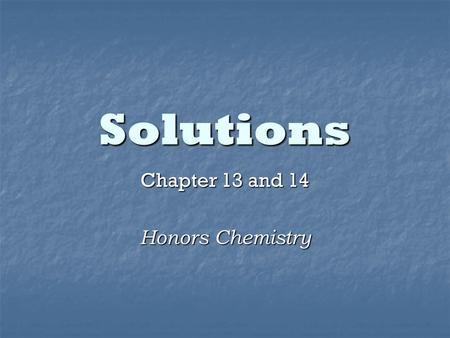 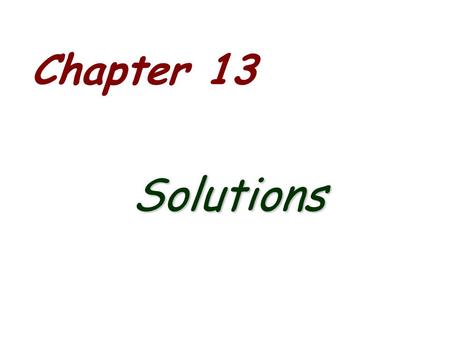 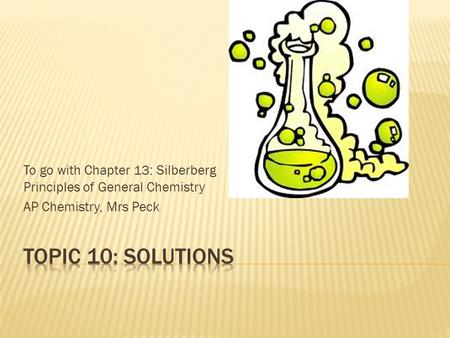 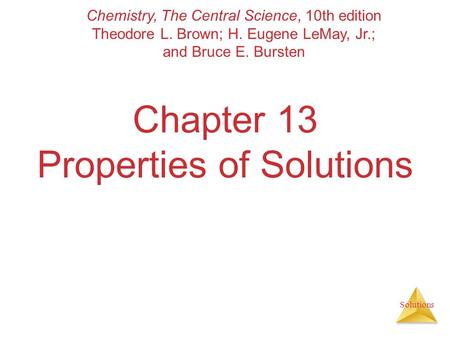 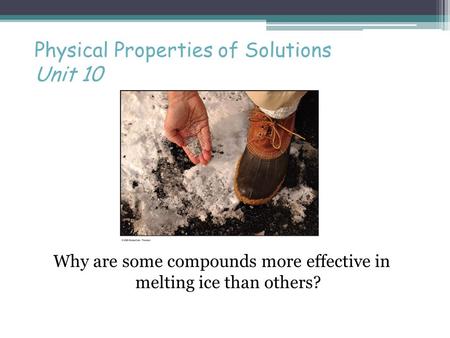 Physical Properties of Solutions Unit 10 Why are some compounds more effective in melting ice than others? 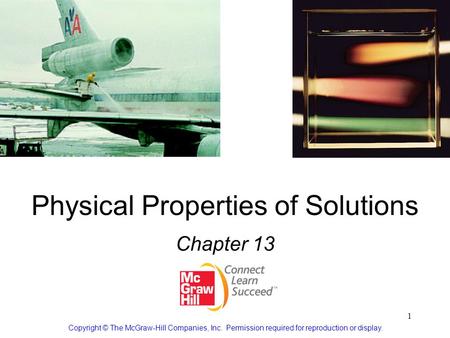 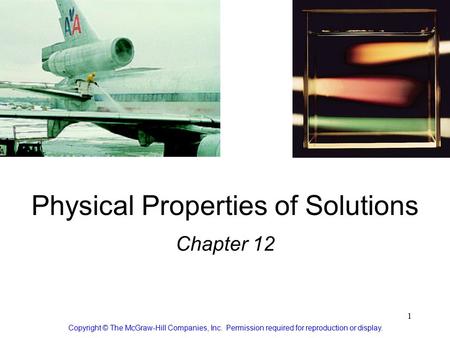 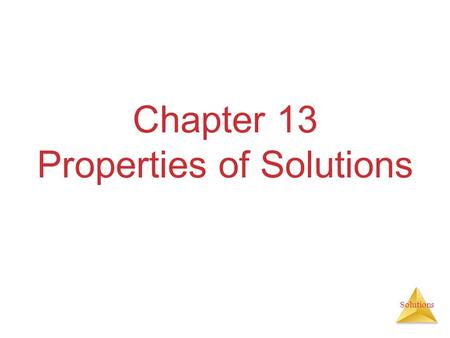 Solutions Chapter 13 Properties of Solutions. Solutions Solutions are homogeneous mixtures of two or more pure substances. In a solution, the solute is. 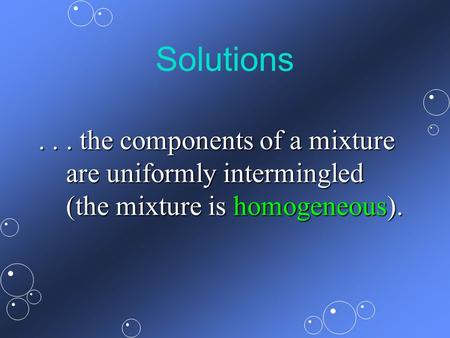 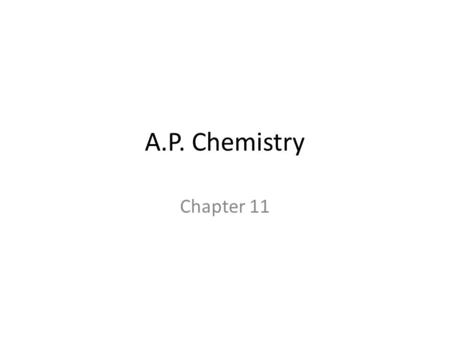 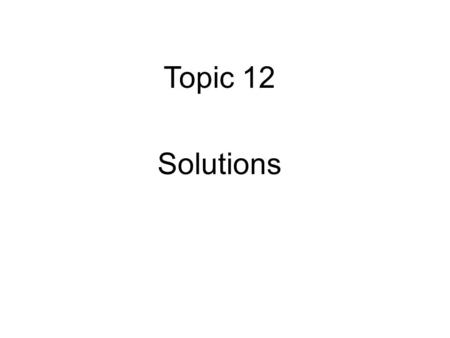 Topic 12 Solutions. A solution is a homogeneous mixture of two or more substances or components. Solutions may exist as gases, liquids, or solids. The. 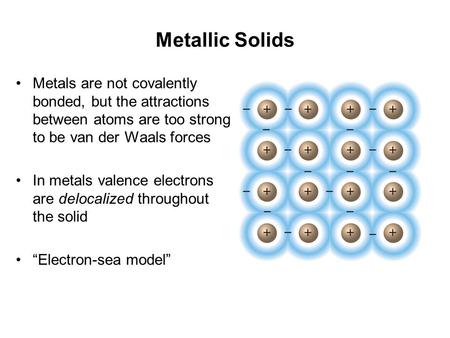