The First Texans 1. Get your journal and have a pencil ready!!

Presentation on theme: "The First Texans 1. Get your journal and have a pencil ready!!"— Presentation transcript:

1 The First Texans 1. Get your journal and have a pencil ready!!

2 Ancient Texans People migrated to the Western Hemisphere 35,000 years ago These ancient Texans walked across the Bering Strait ice bridge Over time, these people moved south and learned to adapt to their surroundings We study these people using artifacts

3 Native People of Texas Between Texas tribes spread throughout the 4 regions We classify these tribes as: Southeastern, Gulf, Pueblo and Plains cultures

4 Southeastern Tribes Lived in the coastal plains region
These people lived in small groups and shared responsibility for decision making Believed in nature spirits Many of the tribes were peaceful, but some were warlike Some lived in communities while others lived nomadic lives Caddo, Coahuiltecans

5 Caddos Lived in the eastern part of Texas
24 groups made up the Caddo > confederacies Each group had its own government, both men and women help important position Was the most agriculturally advanced of the tribes, growing squash, beans, pumpkins, and corn Also gathered food and fished/hunted

6 Caddo cont. Most Caddo lived in permanent villages, in dome-shaped homes that looked like beehives Often engaged in warfare against other tribes, but worked well with French explorers

7 Coahuiltecans Lived primarily in south Texas plains
All members of the tribe enjoyed equal status and shared work/food Shamans, healers, led religious ceremonies and healed the sick Was a nomadic tribe and moved often in search of food When unable to hunt with bows/arrows (javelina or small boar) they ate cactus, plants, lizards, worms Many died after being exposed to diseases brought from Europeans

8 Gulf Coast-Karankawas
Lived along the Gulf Coast on small islands Semi-permanent March to Sept: built camps near forests and hunted/gathered Oct-Feb moved to the coast & lived off seafood and water plants Made and used dugout canoes One of the first tribes to make contact with European explorers, by 1800s most were displaced or killed Rumors of cannibalism!!

10 Jumano Lived in the present day Texas, New Mexico & northern Mexico
Traded with other tribes and hunted buffalo Very friendly with the Caddo and traded crops for animal skins/meat Made pottery and jewelry making them very popular to trade with Men had striped tattoos on their faces

12 Plains Tribes Life in the plains revolved around the buffalo
Horses introduced by Spanish in 1600s Outstanding hunters/warriors million buffalo, by 1800s nearly wiped out and along with them the tribes Tonkawas, Apache, Commanche, Kiowa n.com/search?Ntt=native+a mericans

13 Apache Lived all throughout the plains territories > life fully centered on the buffalo Nomadic Tribes-Mescaleros and Lipan Tribes led by a chief Men expected to be warriors Became the finest horsemen of the plains Serious enemies of the Comanche; eventually left the plains and moved more towards the mountains/basins Geronimo

14 Tonkawa Lived on the Edwards Plateau, near Austin
Some lived on the coastal plains Unable to really hunt buffalo due to fierce competition from Comanche and Apache Hunted small game, turtles, rabbits, snakes Lost many people due to fighting with Europeans and other plains Indians Eventually moved to reservations

15 Kiowa Allies of the Comanche Nomadic tribe
Could move whole camps in 30 minutes Lived in large teepees of up to 20 tanned hides Prized their history and wrote their stories on buffalo hides Honoring the sun=great things All males expected to be warriors Satanta-great leader Great hunters/fighters, but eventually forced onto reservations with the other plains Indians

16 Comanche Territory was known as Comancheria
Covered Tx plains, OK, KS, CO, NM Fiercest of the plains tribes Divided into many small groups Each group led by a council of older men who made decisions for the tribe

17 Comanche Life centered on 2 activities:
Hunting-buffalo > excellent hunters, even better when horses were introduced War-fought other tribes and white settlers for control over land (buffalo) Often raid or steal horses from enemies Fought until 1875, when loss of the buffalo forced them to accept life on reservations

Download ppt "The First Texans 1. Get your journal and have a pencil ready!!" 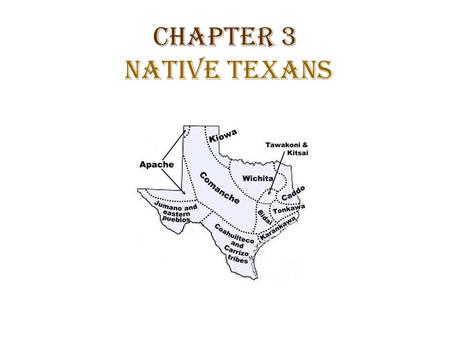 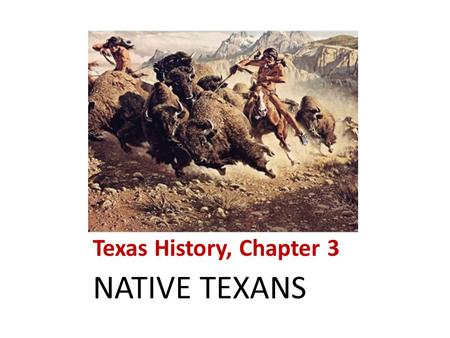 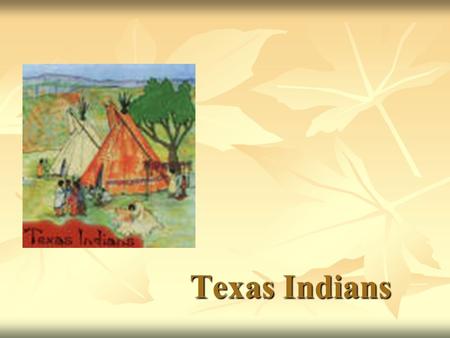 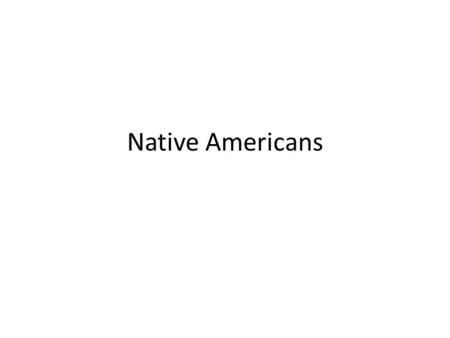 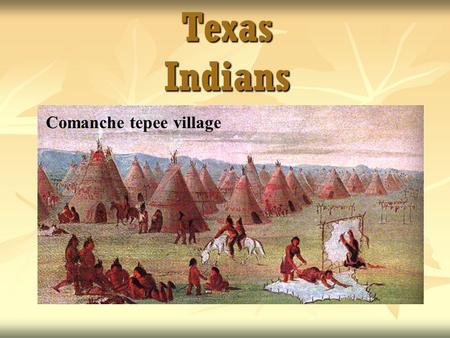 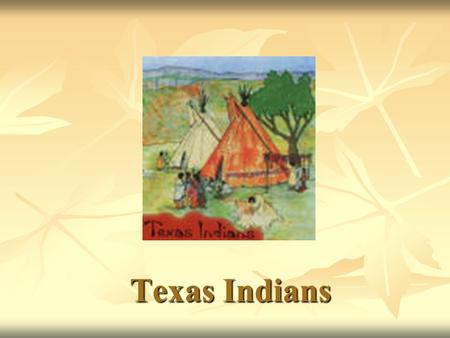 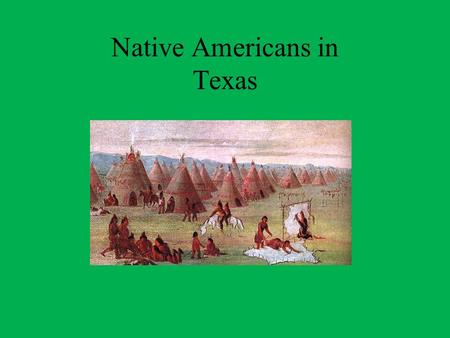 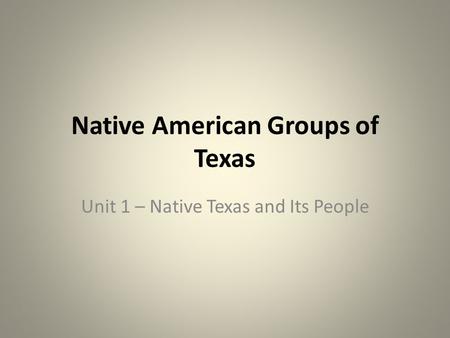 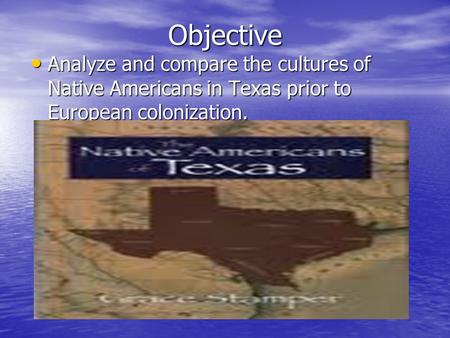 Objective Analyze and compare the cultures of Native Americans in Texas prior to European colonization. 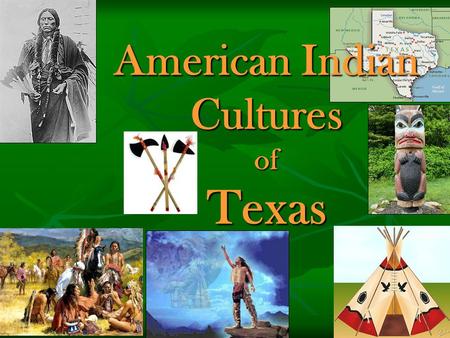 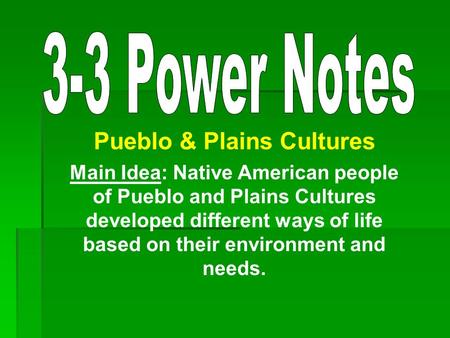 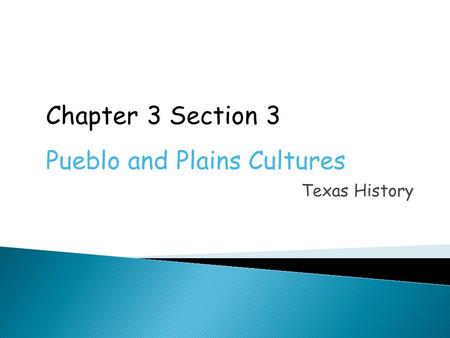 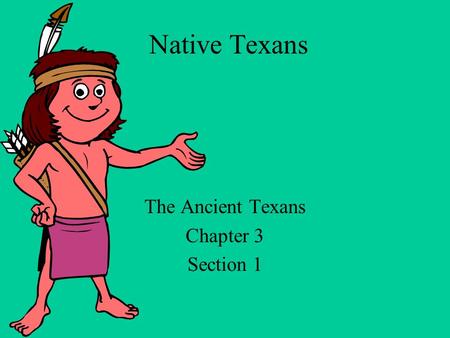 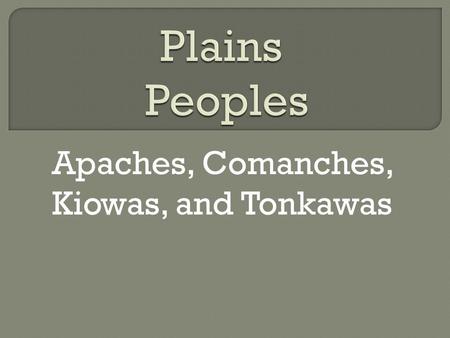 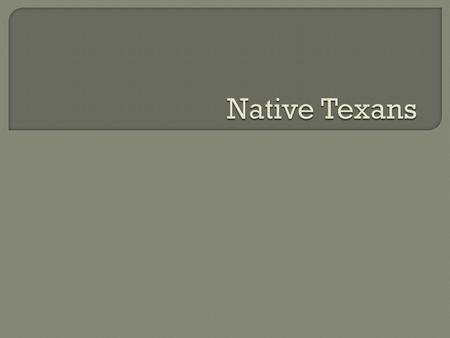  First people to come to North America may have migrated from Asia about 37,000 years ago.  These first explorers did not keep written records, so we. 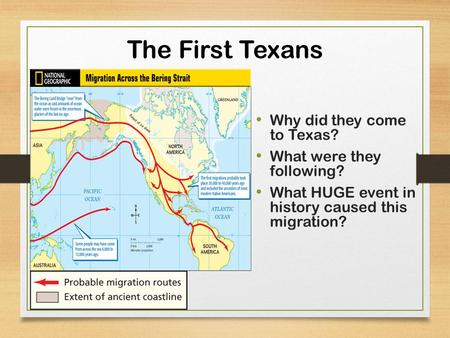 The First Texans Why did they come to Texas? What were they following? What HUGE event in history caused this migration? 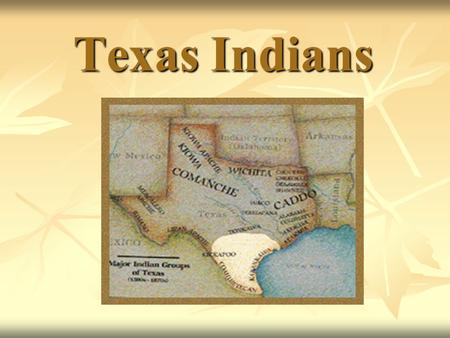 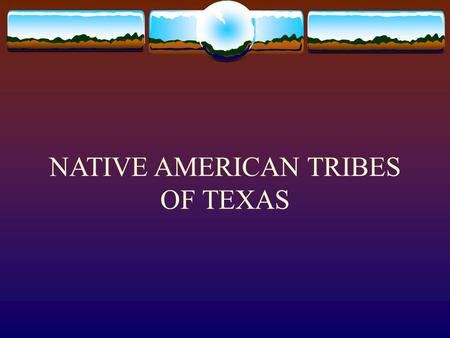 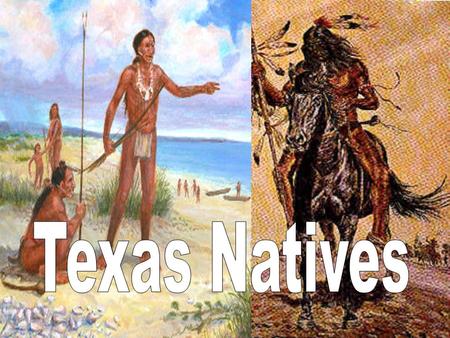