Presentation on theme: " Handel’s Father recognized his music ability but never really did much to help him nourish it.  As a Boy Handel would have to sneak his keyboard."— Presentation transcript:

3  Handel’s Father recognized his music ability but never really did much to help him nourish it.  As a Boy Handel would have to sneak his keyboard upstairs with him so that he could practice.  Handel studied music as a boy with Wilhelm Zachow

6  Handel Left Hamburg and went to Italy in 1706  Performed his first Italian opera (Rodrigo) in October 1707.  Handel left Italy for the winter of 1707 to produce his two oratorios, Florindo and Daphne. Later returning to Rome to direct his oratorio La Resurrezione.

7  February 1710 Handel returned to Germany, and is appointed Kapellmeister to the Elector of Hannover.  Kapellmeister is a German word designating a person in charge of music-making.  He completed the cantata Apollo e Dafne which he had begun in Italy.

8  In the Autumn of 1710 Handel left Hannover and traveled to England via Holland.  Handel’s 1711 opera Rinaldo was very appealing to the English audiences.

9  Handel suffered from a stroke that caused temporary paralysis in his right arm.  He lost some mental faculties, and became blind in his old age.  Despite his difficulties he continued composing until the day he died.  George Friedrich Handel Died April 14, 1759 Memoir Statue, Halle Germany

11  This is one of Handel’s most popular choruses from the oratorio of Christ’s life and Death.  It is commonly performed at Christmas time.  Composed in London during the summer of 1741 and premiered in Dublin, Ireland on 13 April 1742

12  The first performance was in Covent Garden, April 1 1747  It became one of Handel’s most famous oratorio’s, being second only to “Messiah”.  This oratorio consists of 3 acts.

13  Handel’s collection of orchestral movements often called 3 suites.  Premiered July 17, 1717, when King George I requested a concert on the river Thames.  50 musicians performed on a barge near the royal barge, where the King and close friends could listen.  The instruments required for a complete performance are a flute, two oboes, one bassoon, two horns, two trumpets, strings, and continuo.

Download ppt " Handel’s Father recognized his music ability but never really did much to help him nourish it.  As a Boy Handel would have to sneak his keyboard." 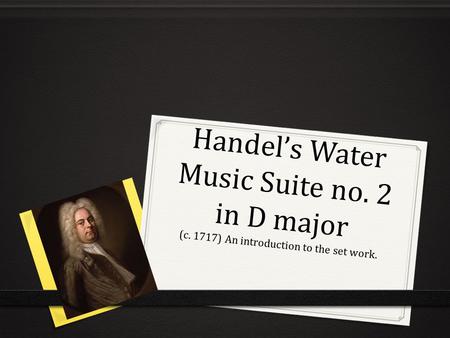 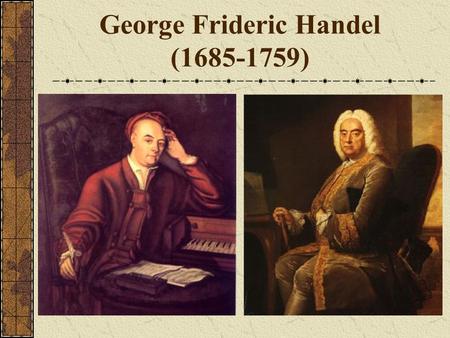 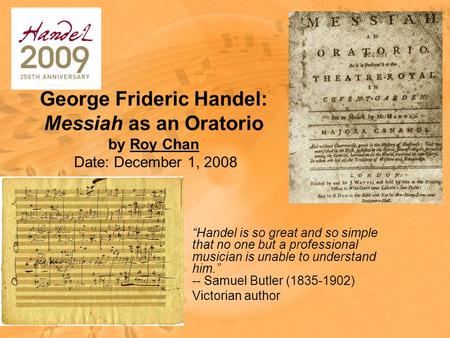