Presentation on theme: "RULE 5. Series of downs, number of down and team possession after penalty Four consecutively numbered downs are awarded to a team to put the ball in play."— Presentation transcript:

2 Series of downs, number of down and team possession after penalty Four consecutively numbered downs are awarded to a team to put the ball in play from scrimmage after a free kick, touchback or fair catch. In order to be awarded a new series of downs the team must advance the ball to/or beyond the line to gain. On any down other than fourth the line to gain can be achieved by considering the action that took place during the down and the effect of any dead ball foul. On fourth down a new series is awarded after considering the effects of any act that occurred during the down other than a non-player or unsportsmanlike foul (these fouls are treated as dead ball fouls).

5 NEW SERIES A new series is awarded to the team in possession at the end of the down: a)When there has been a change of team possession unless the foul is accepted for a penalty that occurred prior to the change of team possession. b)On a scrimmage kick if ‘R' is the first to touch the ball after it has gone beyond the expanded neutral zone, unless the penalty is accepted for a foul which occurred prior to the end of the kick.

7 FREE KICKS On free kicks a new series is awarded to ‘R' in the following manner: a) Kicks going out of bounds last touched by ‘R'. b) Kicks in joint possession of ‘R' and ‘K'. c) At the spot of recovery by ‘K' if the ball has not traveled the required 10 yards and ‘R' has not touched the ball. d) At the spot of first touching by ‘K' if K is the first to touch the ball prior to it going the required 10 yards. ( This right is cancelled if during the down ‘R' touches the kick and then commits a foul or a penalty for any foul is accepted.).

8 FREE KICKS On free kicks a new series is awarded to the team in final possession: When the ball has traveled a least 10 yards and touched the ground (these two things can happen in any order) and the ball is recovered.

10 Down and possession after penalty e) When a foul occurs prior to the down or simultaneous with the snap the number of the next down is same as the number established prior to the foul. Unless enforcement results in a first down for ‘A'. f) When a foul occurs prior to or during a free kick down and before there is a change of team possession the down that follows is a free kick down. Unless after a fair catch or awarded fair catch a scrimmage down is chosen.

12 Line to Gain and Measurement a)The line to gain is always 10 yards in advance of the ball's foremost point when a new series is awarded unless the goal line is less than 10 yards away. Then the goal line is the line to gain. The penalties for all fouls (including non-player and unsportsmanlike) that occur prior to the ready for play signal are administered prior to the establishment of the line to gain. b)A request for measurement for a possible first down may be made by the captain prior to the ball being marked ready for play. The request can be denied if the referee feels the line to gain has or has not been reached. c)On a change of possession that does not include an incomplete fourth down pass, the foremost point of the ball now becomes the rear point when the direction of the offense is changed. d)On a forth down incomplete forward pass the ball is placed at the previous spot so that the rear point of the ball becomes the foremost point of the ball when the direction of the offense is changed.

Download ppt "RULE 5. Series of downs, number of down and team possession after penalty Four consecutively numbered downs are awarded to a team to put the ball in play." 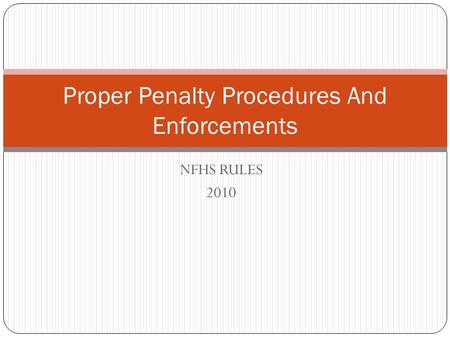 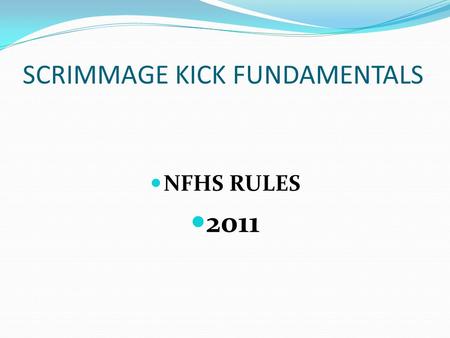 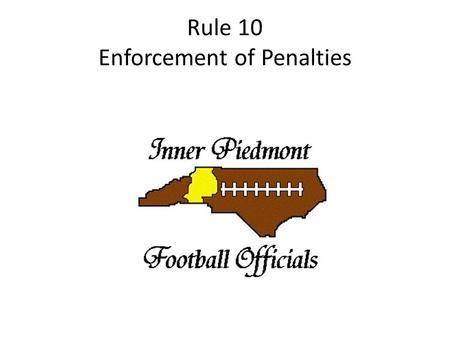 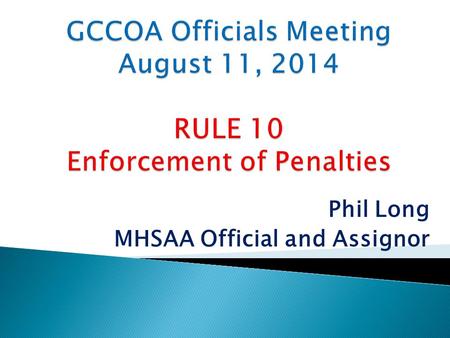 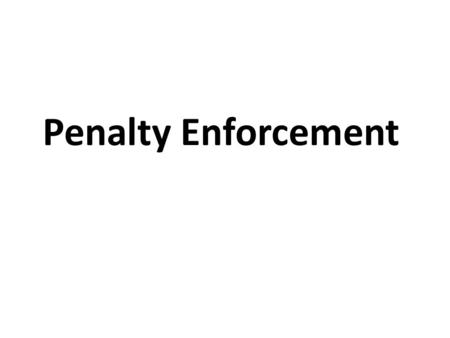 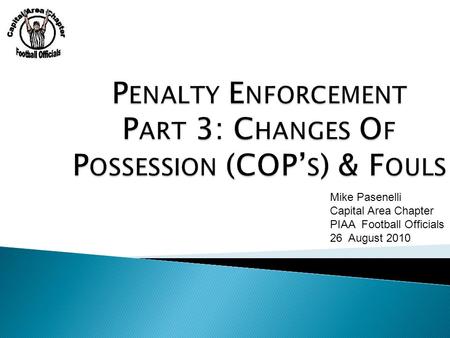 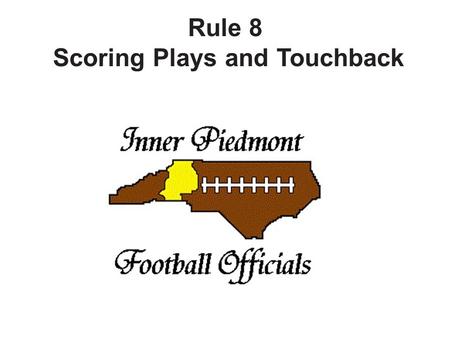 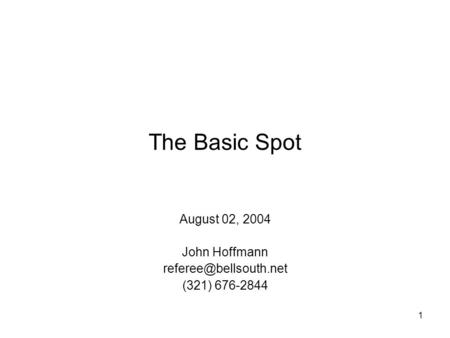 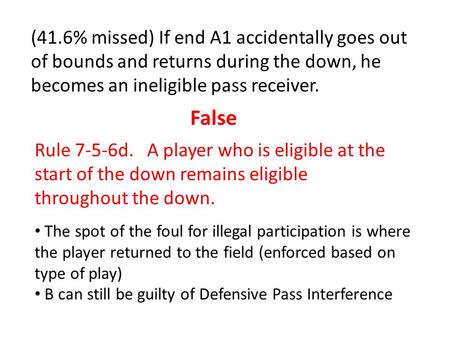 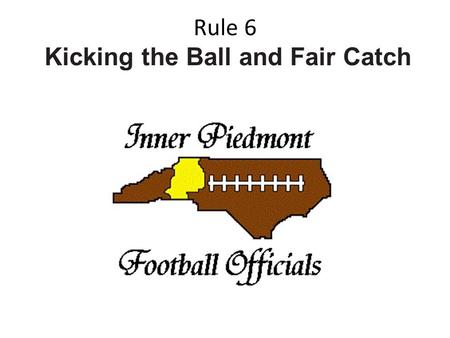 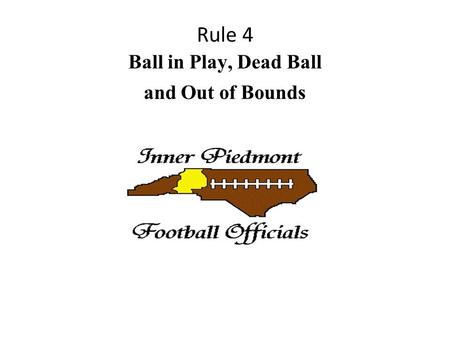 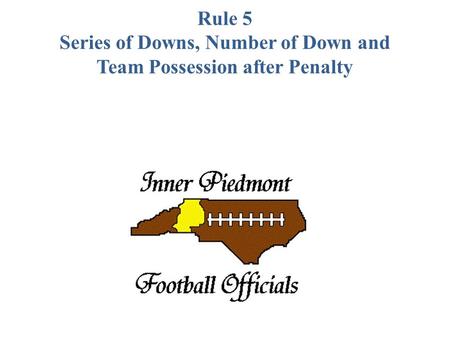 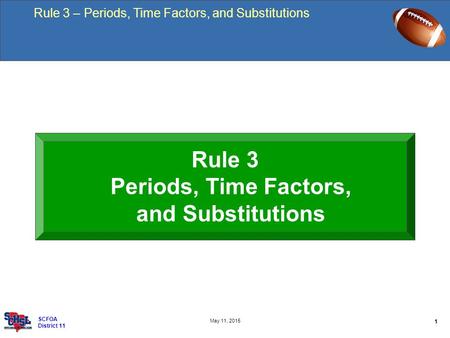 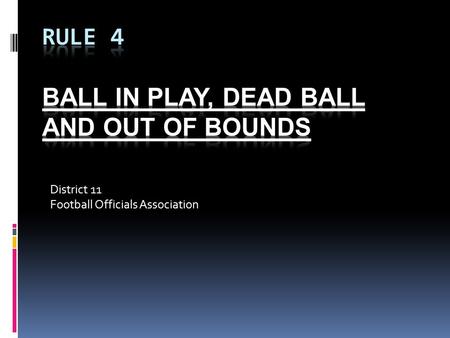 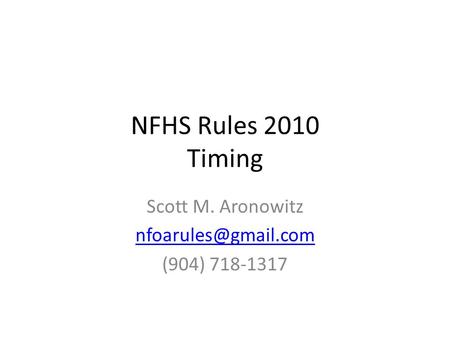 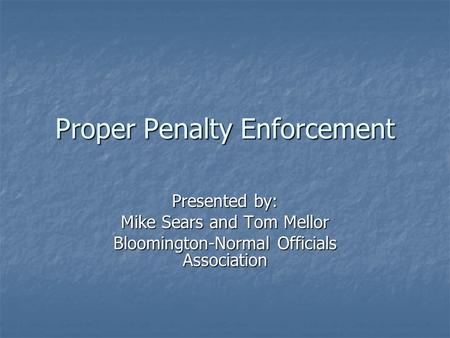 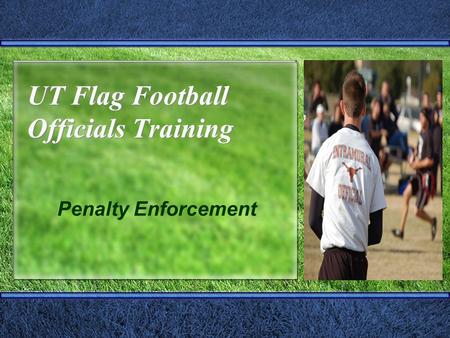 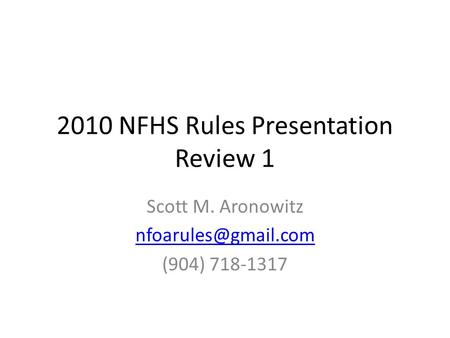 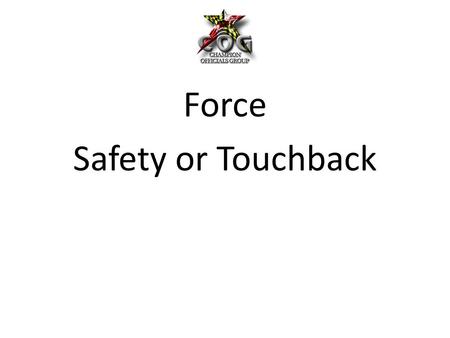