Presentation on theme: "UDP & TCP Where would we be without them!. UDP User Datagram Protocol."— Presentation transcript:

1 UDP & TCP Where would we be without them!

3 UDP (1 of 5)  How does it work? Connectionless Provides only checksum Provides delivery to port number No detection of lost packets

4 UDP (2 of 5)  Why use it? Designed for apps that do not need to put sequences of packets together. Speed  No acknowledgments are required Multicast applications? Definitely!

6 UDP (4 of 5)  Header Length (2 Bytes) Defines the length of the packet from the UDP header to the end of UDP data  Checksum (2 Bytes) Different from other headers Performed on contents of UDP header, less the checksum field itself, the data and a pseudo- header derived from the IP header. Pseudo-header is derived from the IP Source address, destination address, protocol, and UDP length fields.

11  Source & Destination Ports – 16 bits Specify source and destination applications for encapsulated data Assigned ports are numbered from 0 – 1023  Example: TFTP is port 69, Doom is 666 Any private application uses port numbers above 1023  Sequence Numbers – 32 bits Identifies where encapsulated data fits in data stream from sender  Example: if sequence # of segment is 1234 and segment contains 512 bytes of data, next segment should have sequence # of 1747 (1234 + 512)

15 TCP  TCP Flags A, ACK- (Acknowledge) The receiver will send an ACK that equals the senders sequence number plus the Len, or amount of data, at the TCP layer. SYN, and FIN flags count as 1 byte. The ACK can also be thought of as the sequence number of the next octet the receiver expects to receive. S, SYN- Synchronize is used during session setup to agree on initial sequence numbers. Sequence numbers are random. F, FIN- Finish is used during a graceful session close to show that the sender has no more data to send. R, RST- Reset is an instantaneous abort in both directions (abnormal session disconnection). P, PSH- Push forces data delivery without waiting for buffers to fill. This is used for interactive traffic. The data will also be delivered to the application on the receiving end with out buffering. U, URG- Urgent- Data is sent out of band.

18 TCP  How does it work? Ensures reliable communication between sender and recipient Establishes this via a Three-Way- Handshake process Via the TWH, negotiates a “socket” The socket remains open for duration of communication

21 TCP  Reliability TCP uses Sequencing to ensure that a datagram hasn’t gotten lost If the receiver determines something is wrong, it will notify the sender to resend the missing packet(s) The acknowledgement field assists by informing the sender what the next sequence number is expected to be  It is always one greater than the most recently received data byte.

23 TCP TCP Sequencing with no errors

25 TCP Flow Control  Flow control Sliding window  Amount of data sent to a host before expecting to get an ack.  Negotiated by the two systems during the 3-way handshake.  Primary reason is for congestion control.  Window size can be reduced to alleviate congestion

28 TCP Vulnerabilities  3-Way handshake Server will wait for a while after sending the SYN/ACK. Server will send another SYN/ACK Repeated 5-6 times. Each time, server waits twice as long to give client a better chance to connect. If server tries 6 times and starts with a 3 second delay, total wait time could be 189 seconds!

29 TCP Vulnerabilities  Denial of service SYN Flood  Attacking system sends SYN packets to server with invalid return address.  Server will try sending a SYN/ACK to the non-existent address.  End result is that the socket the attacker sent the SYN to is blocked temporarily.  1000’s of SYNs are sent, blocking all available sockets on the server.

30 TCP Vulnerabilities  Denial of service (cont.) SYN Flood  Many attempts have been made to stop this attack.  E.g. Sending RST to suspicious SYN packets Failed to stop attack due to volume of SYN packets.

Download ppt "UDP & TCP Where would we be without them!. UDP User Datagram Protocol." 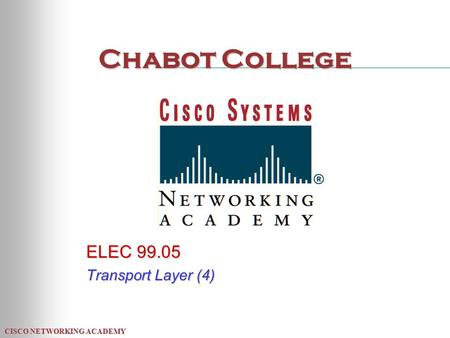 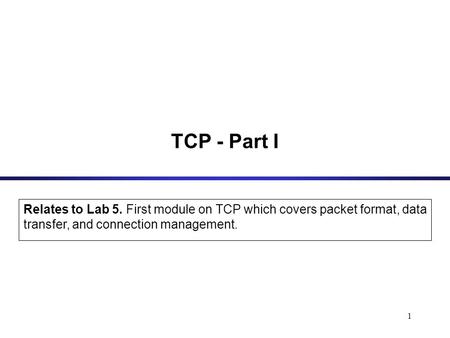 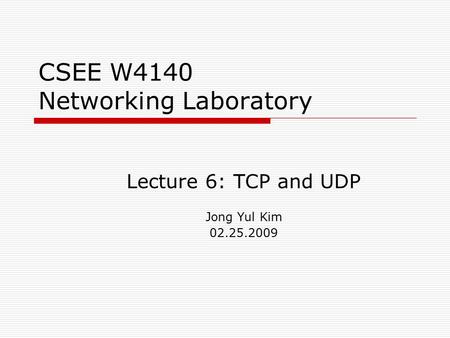 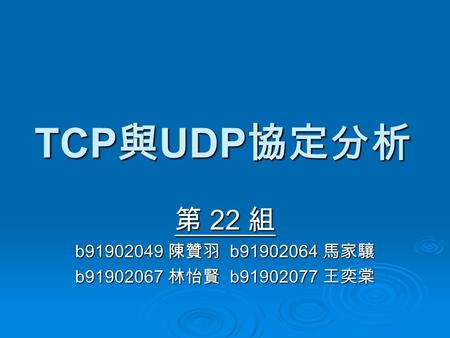 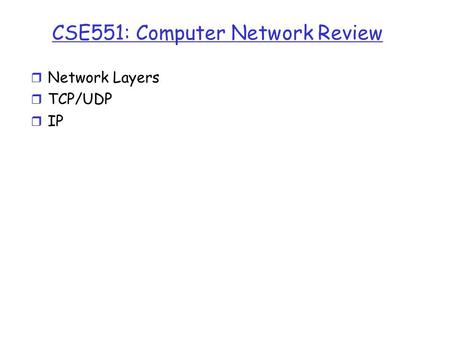 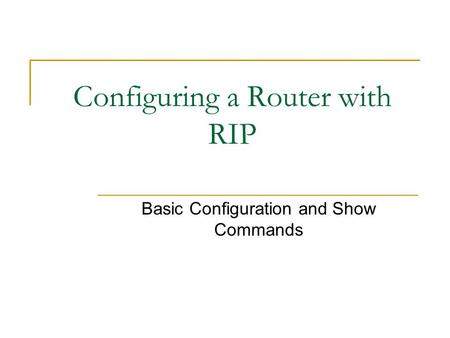 Configuring a Router with RIP Basic Configuration and Show Commands. 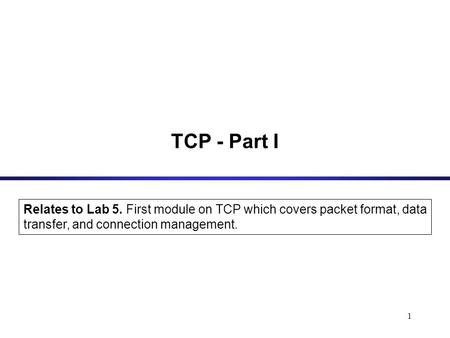 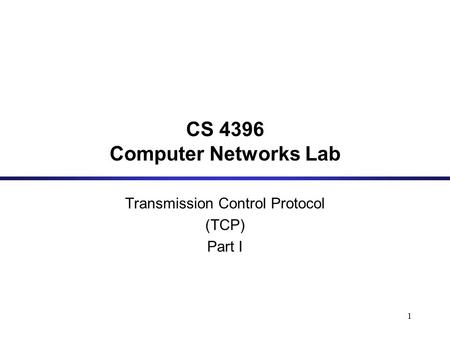 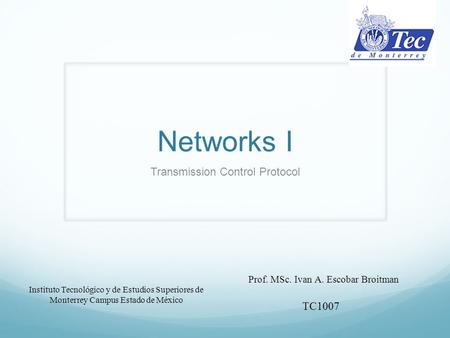 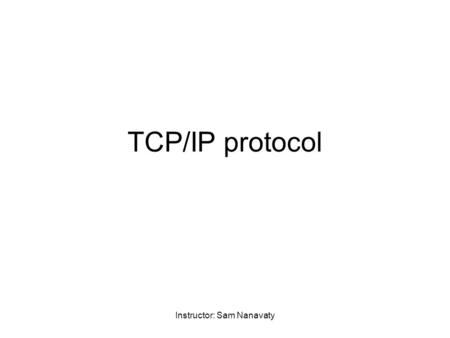 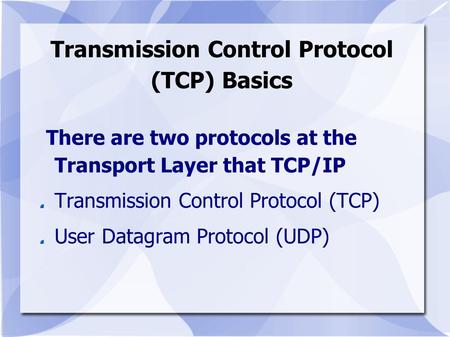 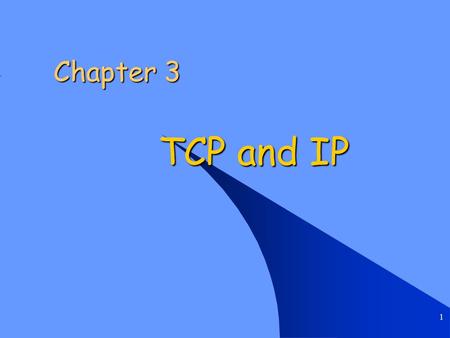 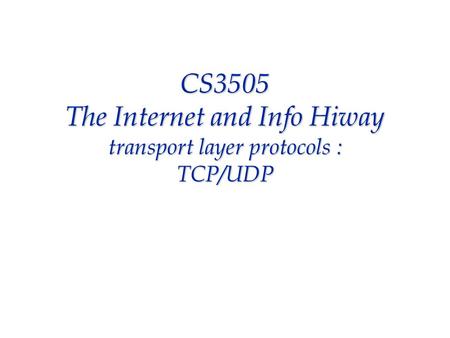 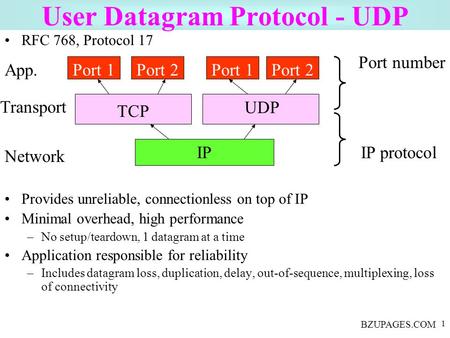 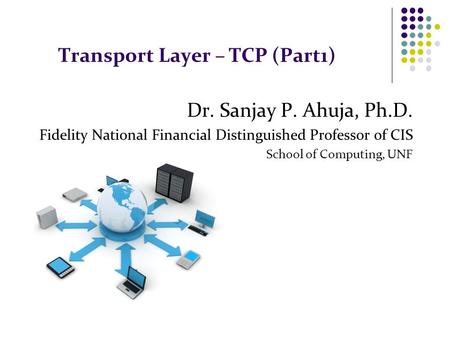