4 Marriage Customs, rules, and obligations for relationships between: A sexually cohabiting man and woman Parents and children Families of the bride and groom

7 Reasons for Incest Taboo Avoids inbreeding. Prevents disruption in the nuclear family. Directs sexual desires outside the family. Forces people to marry outside the family and create a larger social community.

10 Exogamy Rules specifying that a person must marry outside a particular group. Almost universal within the primary family group. Leads to alliances between different families and groups.

11 Endogamy Rules that marriage must be within a particular group. In India, the caste is an endogamous group. In the U.S., social classes tend to be endogamous.

13 Number of Spouses Rules of # of spouses at one time. Monogamy-Europe and North America. Polygamy-75% world’s societies. Polygyny Polyandry

15 Young woman from Mursi village from Southern Ethiopia Mursi are largerly known for their custom of inserting a large balsawood or terracotta disk in the lower or upper lip. It is a sign of tribal identity and ornamentation but more importantly it is a useful means of indicating the size of the dowry paid.

16 Nuclear Family A husband, a wife, and their children. Effects of high divorce & remarriage rates.

19 Class Discussion Activity Describe the following forms of marriage and give their characteristics: Polygyny Polyandry Serial Monogamy Using Cultural Relativism describe the universal of marriage cross-culturally. Reasons, functions, family structure, social relations, roles, global pressures (cost of globalization). Describe what are some of the issues surrounding Gay Marriages (pro/con arguments of the debate). What do you think? Should Gay people be allowed to marry? What about having or adopting children? Why or why not? 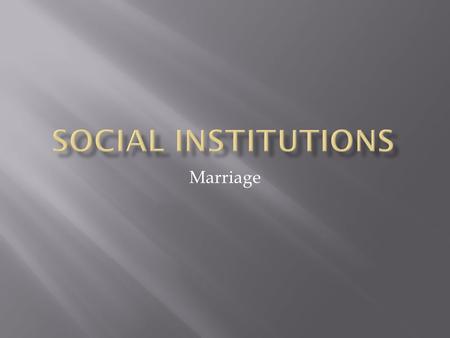 Marriage.  Marriage is an institution which admits men and women to family life. It is universally present in all civilised societies though its forms. 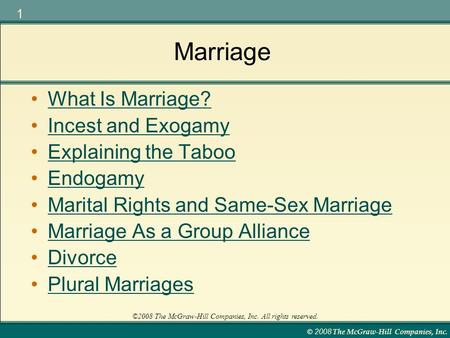