3 Macroeconomic projections for 2013-2014 External environment  In the period between the two projections:  Minor deterioration of the global economic prospects... ...in presence of further monetary stimulus, provided by ECB and FED... ...expectations for negative GDP change in the Euro area in 2013 and slight recovery in 2014.

7 Foreign interest rate  The foreign interest rate continued to decrease, in conditions of recession delay and steadiness of the ECB key rate in July  Downward revision compared to the previous projection  Expectations for moderate increase in 2013 and 2014

8 Macroeconomic projections for 2013-2014 GDP  Materialization of part of the risks for deterioration of the global economic environment  Almost unchanged perceptions of the labor market and foreign investments, but expectations for smaller credit activity  Maintenance of the assessment for economic stagnation in 2012 and downward revision of the GDP projection for 2013 и 2014  Gradual recovery in 2013 and 2014  expectations for positive effects of the structural changes on the exports  expectations for solid domestic demand growth  Covering of the negative output gap in the second half of 2014

9 Macroeconomic projections for 2013-2014 GDP components  Strong increase in the exports in 2013 and 2014, with expectations for continuous recovery of the foreign demand and world metal prices and positive effect of the activities of the new facilities on the export potential  Larger import pressures by export and domestic demand in 2013, especially in 2014  Increase in the domestic demand in 2013 and moderate growth intensification in 2014, underpinned by the announced direct and public investments and favorable developments with the labor market

11 Macroeconomic projections for 2013 -2014 capital inflows  Lower net inflows in the capital and financial account in 2012 compared to 2011, given lower foreign indebtedness and lower foreign direct investments  Stable capital inflows in 2013 and their increase in 2014, as a result of the expectations for higher direct investments and larger foreign borrowing of the Government  Significant increase in the foreign reserves in 2012 (Euro 124 million) and assessments for further increase in the following two years, thus expecting maintenance of the foreign reserves on adequate level

12 Macroeconomic projection for 2013 -2014 inflation  Downward revision of the projected inflation for 2013 (from 3.5% to 3.2%) and assessment for its stabilization in 2014 (2.3%) on the level close to the historical average  Absence of demand pressures – negative production gap until the middle of 2014  Downward pressures of the oil prices in the current and in the following year  The world food prices, due to the factors on the supply side, still upwards in the first half of 2013 and exhaustion of their inflationary pressure in 2014  Expected increase in the regulated prices in the domestic economy in 2013

13 Macroeconomic projections for 2013-2014 credit growth – The credit growth in 2012 equaled 5.4% (lower than expected), and in the following two years its moderate acceleration is expected, given further deposit growth and available foreign sources of financing – However, the uncertain global environment, the banks’ risk perceptions and the business strategies of the European banking groups that are also present on the domestic market, can produce larger caution of the domestic banking sector about the credit policy – The banking system remains to register high capital adequacy ratio (17.1%), high liquidity and moderate increase in the non-performing loans (10.6%) in the third quarter of 2012

14 Comparison with the previous projection Slight downward revision of the GDP growth from 2.6% to 2.2% and from 3.4% to 3% in 2013 and 2014, respectively - higher initial base - deteriorated expectations about the foreign demand -poorer credit support, in conditions of deteriorated risk perception of the banks - almost unchanged perceptions about the labor market and foreign investments - export and investment activity – remain to be the main factors for economic growth Downward revision of the inflation from 3.5% to 3.2% for 2013 and from 2.6% to 2.3% for 2014 - lower initial conditions - smaller inflationary pressures from the import food and energy prices - still no pressures of the domestic demand External position - higher current account deficit in 2012 (from 2.8% to 3.2% of GDP, mainly caused by one- time factors), given the upward revision with the capital flows - unchanged current account in 2013 (worsened expectations for the trade, but better for the current transfers) and higher capital inflows due to the higher external indebtedness of the Government - lower current account deficit for 2014 and slightly smaller capital inflows -higher accumulation of foreign reserves on a medium-run

15 Summary  Economic stagnation in 2012 and moderate increase in the following two years, given expected new private and public investments;  Lower inflation rate in 2013 and more substantial deceleration in 2014;  The capital inflows in 2013 and 2014 are expected to be sufficient for covering the current account deficit and additional accumulation of foreign reserves;  It is estimated that the foreign reserves on a medium-run will maintain on adequate level, reflecting the capability of the economy to mop-up the potential negative shocks;  Further risks of the scenario regarding the changes and the uncertainty in the external environment, imposing a need of further regular monitoring of the macroeconomic developments, and if needed, reaction by taking adequate measures. 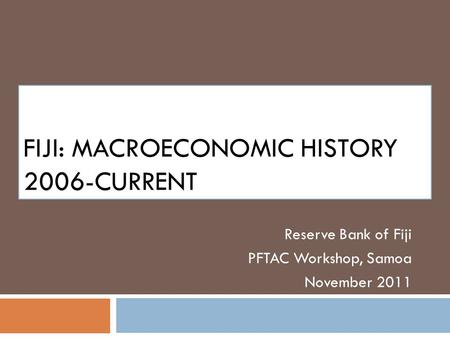