2 E XCEPTION is an indication of a problem that occurs during a program’s execution.

5 unsuccessful division : problem is divide by zero Exception detected in line 27 in main. Exception occur in line 18 in quotient. Throw point: is the initial point at which the exception is occur In this example throw point is line 18 Type of Exception : java.lang.ArithmeticException this exception can arise from number of different problems in arithmetic. Type of problem : divide by zero Stack trace

6 quotient main Stack Stack trace: a stack trace is a list of the method calls that the application was in the middle of when an Exception was thrown. Syntax of stack trace statement : Name of packageName of className of methodName of fileLine num

8 E XCEPTION HANDLING Enables you to create applications that can resolve (or handle) exceptions. In many cases, handling an exception allows a program to continue executing as if no problem had been encountered.

12 Problem : input not match for the expected type

15 C OMMON P ROGRAMMING E RROR It’s a syntax error to place code between a try block and its corresponding catch blocks. Each catch block can have only a single parameter, specifying a comma-separated list of exception parameters is a syntax error.

16 U NCAUGHT E XCEPTION Uncaught Exception: Is one for which there are no matching catch blocks.

23 Without the required throws Exception clause is compilation error.

24 However, for the exception of the type called runtime exceptions, the throws clause is optional.

26 C HECKED VS. U NCHECKED E XCEPTIONS Unchecked( runtime exceptions ) Checked they are detected only at runtime. is an exception that is checked at compile time. a method is a propagator of runtime exceptions or errors, the throws clause is optional. a method is a propagator of checked exceptions, the method must have the throws clause. All exception type that are direct or indirect subclasses of class RunTimeException. Classes that inherit from class Error are considered to be unchecked All class that inherit from class Exception but not class RunTimeException are considered to be checked exception

27 C ATCHING S UBCLASS E XCEPTIONS If a catch handler is written to catch superclass- type exception objects, it can also catch all objects of that class’s subclasses. This enables catch to handle related errors with a concise notation and allows for polymorphic processing of related exceptions. You can certainly catch each subclass type individually if those exceptions require different processing.

30 If there are multiple catch blocks that match a particular exception type, only the first matching catch block executes when an exception of that type occurs.

36 S TACK U NWINDING AND O BTAINING I NFORMATION FROM AN E XCEPTION O BJECT When an exception is thrown but not caught in a particular scope, the method-call stack is “unwound,” and an attempt is made to catch the exception in the next outer try block. This process is called stack unwinding. Unwinding the method- call stack means that the method in which the exception was not caught terminates, all local variables in that method go out of scope and control returns to the statement that originally invoked that method. If a try block encloses that statement, an attempt is made to catch the exception. If a try block does not enclose that statement or if the exception is not caught, stack unwinding occurs again.

39 O BTAINING D ATA FROM AN E XCEPTION O BJECT Class Throwable also provides a getStackTrace method that retrieves the stack-trace information that might be printed by printStackTrace. Class Throwable’s getMessage method returns the descriptive string stored in an exception.

40 C HAINED E XCEPTIONS Sometimes a method responds to an exception by throwing a different exception type that’s specific to the current application. If a catch block throws a new exception, the original exception’s information and stack trace are lost

43 P RECONDITIONS AND P OSTCONDITIONS A precondition must be true when a method is invoked. Preconditions describe constraints on method parameters and any other expectations the method has about the current state of a program just before it begins executing. If the preconditions are not met, then the method’s behavior is undefined—it may throw an exception, proceed with an illegal value or attempt to recover from the error. You should not expect consistent behavior if the preconditions are not satisfied. 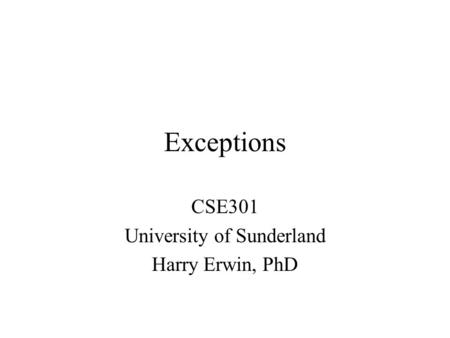 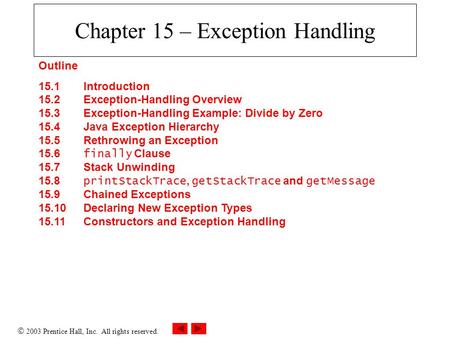 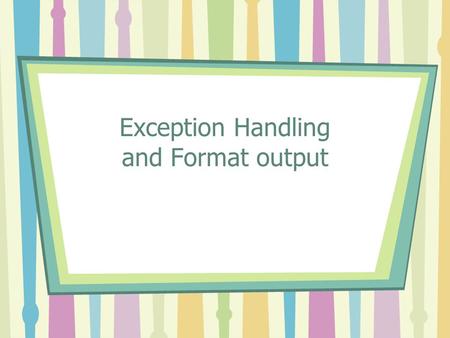 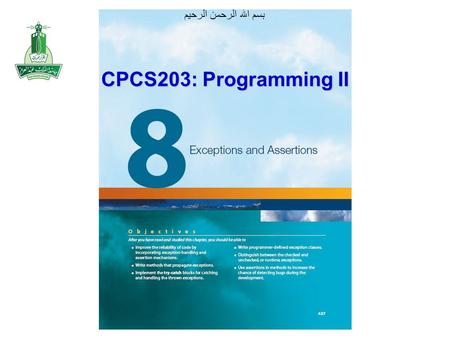 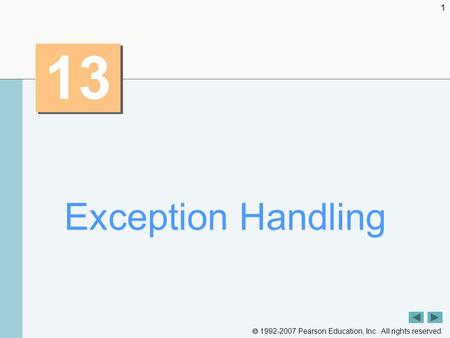