3  Fundamental Legal Rights › In Democracy all citizens are equal under the law and accountable to the laws › No one is above Dee Law  The Changing Justice System › Society is always changing... So too must our laws › Never used to have a problem with internet fraud, for instance, back in the 1800s.

4  Attitudes Toward the Law › Confidence in the legal system has diminished due to corruption and failure › Often a particular case can highlight attitudes towards an issue (like racism, marijuana legalization, etc)  Wrongful Convictions › Canadian Justice is based on the idea that you are innocent until proven guilty › Sometimes evidence is mis-interpreted, or mismanaged, resulting in a wrongful conviction

5  Youth Criminal Justice › The Youth Criminal Justice Act establishes Canadians between 12-17 as criminals, but with an emphasis on reform for punishments › The idea is to help youths reform to take an active part in society › Sometimes a youth is not arrested, only warned in one fashion or another (not if the crime is serious, however › Youths have the right, when arrested, to:  Have a parent/guardian, or other adult present during questioning  Have a lawyer  Not to make statements that can be used against him or her

6  The Criminal Investigation › The arrest someone, the police need a Warrant. They get this from a Judge after proving that they have legitimate reason to suspect someone of a crime › Indictable offences are serious business– like in a crime involving violence or theft › Summary offences are minor › A Judge will decide if there is enough evidence to take the case to trial or to allow bail

7  The Courts › A trial can be before a judge and jury or just a judge (the defendant gets to choose) › A jury is made up of 12 peers. These must be approved by the Crown (prosecution) and defence lawyer  The Trial › Our courts function on the “Adversarial System” – this means there is a prosecution and defence › The prosecution has the “Burdon of Proof” › Witnesses may not use “Hearsay evidence” › Defendants cannot be forced to take the stand

9  Procedure in Civil Cases › A civil case is when there is a dispute between individuals (no crime against society has occurred) › When one person (the plaintiff) has a dispute with another (like an accident on a business property) they can sue that person (defendant). › Plaintiffs submit a report of what happened (a complaint) and also a Remedy (what they want in compensation) › Before the trial both sides write a statement explaining their point of view and provide the evidence they will use to prove their side for examination. › Defendant must be proved guilty beyond a reasonable doubt 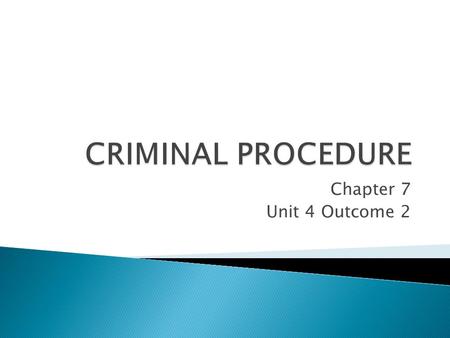 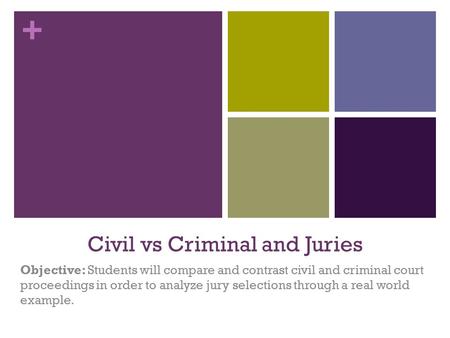 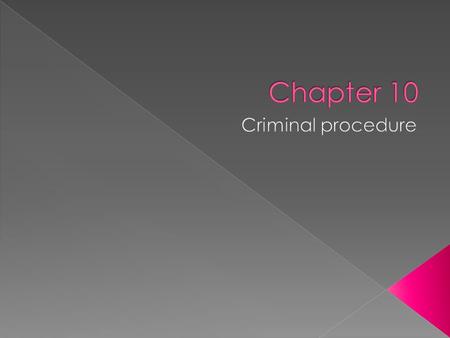