1 Stability & Cloud Development
This chapter discusses: Definitions and causes of stable and unstable atmospheric air Processes that cause instability and cloud development

2 Stability & Movement A rock, like a parcel of air, that is in stable equilibrium will return to its original position when pushed. If the rock instead departs in the direction of the push, it was in unstable equilibrium.

5 Behavior of Rising and Sinking Air
Rising air expands, using energy to push out, which slows and adiabatically cools the air. A parcel of air may be forced to rise or sink, and change temperature relative to the environmental air, which is sampled using radiosonde balloons. The radiosonde balloon expands in size from approximately 6 feet to a diameter between 24 and 32 ft before it bursts. The balloon carries the instrument package to an altitude of approximately 25 mi (27-37 km) where the balloon bursts (at a pressure of approximately 10 mb). = Exerted Pressure

6 Fun Facts on Radiosondes
Radiosondes contain sensors that measure profiles of pressure, temperature, and relative humidity. The balloon rises at about 300 meters/minute (about 1,000 feet/minute). the balloon expands in size from approximately 6 feet to a diameter 20+ ft before it bursts. A small parachute slows the descent of the radiosonde, minimizing the danger to lives and property. The radiosonde flight can last in excess of two hours, and during this time the radiosonde can ascend to over 35 km (about 115,000 feet) and drift more than 200 km (about 125 miles) from the release point. Less than 20 percent of the approximately 75, radiosondes released by the NWS each year are found and returned to the NWS for reconditioning. All observations are usually taken at the same time each day at 0000 and 1200 UTC, 365 days a year. Observations are made by the NWS at 92 stations in the contiguous United States, 13 in Alaska, in the Pacific, and 1 in Puerto Rico.

7 Dry & Moist Adiabatic Rates
A parcel of rising dry air cools at faster rate, while latent heat released from the saturated parcel by condensing vapor keeps the environmental temperature closer to the moist adiabatic rate. Due to the environmental air cooling rate being slower, the parcel of air held by the helicopter is always cooler and sinks back to its original position. This example depicts an absolutely stable atmosphere. An absolutely stable atmosphere occurs when the environmental lapse rate is less than the moist adiabatic lapse rate.

8 Stable Atmospheric Conditions
When cold air lies underneath warm air, this setup is considered to be a stable atmosphere because cold air has a higher density, and when displaced will gravitate back below the warm, lighter, air. A morning atmosphere has this stable vertical profile, keeping fog unmixed. Cooling of the surface air can be caused by: Nighttime radiational cooling of the surface An influx of cold surface air brought in by wind (Cold Air Advection; CAA) Air moving over a cold surface Sinking of an entire layer, not just a parcel (subsidence inversion)

9 Subsidence Inversion As a layer sinks and shrinks by compression of the atmosphere above it, its top lowers a greater distance and warms more than the air at the bottom layer. Subsidence inversion forms as air slowly sinks over a large area. This phenomenon occurs most offer aloft. It is associated with a large high pressure area.

11 Absolutely Unstable Atmosphere
An absolutely unstable condition indicates that a lifted parcel of air, either dry or moist, is warmer (or less dense) than the surrounding environmental air, and therefore continues to rise. Since the dry and moist adiabatic rates remain fairly constant in the troposphere, thus the greater the environmental lapse rate (> 10°C per 1000 m), the more unstable the atmosphere will be. This example depicts an absolutely unstable atmosphere.

12 Conditionally Unstable
Conditional instability occurs when the environmental lapse rate (ELR) is between the dry and moist adiabatic ELR. Air that is dry is always cooler and sinks, but when the parcel's dew point is reached it cools more slowly, and may become warmer than the surrounding air, creating instability.

13 Conditionally Unstable Atmosphere: Suppose an unsaturated air parcel is somehow forced to rise from the surface, what would happen? -10° 0° From the surface to 4000 m, the atmosphere is said to be conditionally unstable The level of free convection 10° Rising air is colder than its surroundings and must be forced up 20° 30° The level at which air cools to its dew point and RH = 100%

14 Conditional Instability (conditionally unstable atmosphere)
Unsaturated stable air is lifted to a level at which it becomes saturated, instability may be released. (depends on if the rising air is saturated or not) Exists whenever the environmental lapse rate is between the dry and moist adiabatic rates. The atmosphere is normally in a state of conditional instability since the average lapse rate in the troposphere is approximately 6.5 °C per 1000 m. Stability does not remain constant but rather changes during the day by: Daytime warming Nighttime (radiational) cooling

16 Developing Instability, How? - must increase the ELR
Cooling of the air aloft may be due to: Wind bring in colder air aloft (CAA) Clouds (or the air) emitting IR to space (radiational cooling) Warming of the surface air may be due to: Daytime solar heating of the surface An influx of warming air brought in by the wind (WAA) Air moving over a warm surface When the environmental lapse rate exceeds the dry adiabatic rate, this lapse rate is called superadiabatic lapse rate.

17 Mixing as Instability Trigger
Winds that mix upper and lower atmospheric air by convection or mechanical mixing will increase the environmental lapse rate. As a result of mixing, the top layer cools and bottom layer warms creating an increase in the ELR.

18 Layer of Air Instability
Lifting a stable layer of air causes it to stretch out vertically (with the top section experiencing a greater elevation change and more cooling than the lower section) even when both levels cool at the dry adiabatic rate causing an instability of the whole layer. This layer instability is called convective instability.

19 Convective Instability & Storms
Lifting a stable layer of air that is saturated below and unsaturated aloft will cause the moist air to cool more slowly, and create a very unstable environmental lapse rate. Severe thunderstorms are associated with such processes. Convective vs. Conditional Instability: Conditional instability deals with lifting of a parcel and the release of instability Convective instability refers to a layer being lifted and instability releasing as the result.

23 Development of Cumulus Cloud
The panels reveal vertical trends for temperature and moisture during cloud development. The level of free convection is where rising air becomes warmer than environmental air.

27 Stability & Cloud Height
Environmental lapse rates (ELR) determine the stability, and as the time of day changes the ELR and cloud profile can change.

28 Topography & Clouds Semi-moist air parcels traveling toward a mountain experience orographic lift to an elevation where the dew point is eventually reached by the parcels and clouds are formed. As the condensed moisture falls as rainfall on the windward side of the mountain, the leeward side is kept in a rain shadow due to the warming of the air parcels as they descends down the mountain.

29 Mountain Wave Clouds Extremely Turbulent As moist air condenses into clouds on the windward side of the mountain, sinking and swirling winds on the leeward side create and shape lenticular mountain wave clouds. They appears motionless from the ground.

30 Changing Cloud Forms Uniform winds may align a large region of cirrocumulus or stratocumulus clouds into rows of cloud streets. Sometimes refer to as street clouds. Can be the result of CAA aloft.

31 Billow & Castellanus Clouds
Rapid changes in wind speed with elevation in a stable environment can create wavelike billows clouds. Conditionally unstable air above a cloud may cause lifting and condensation in the shape of castles. Altocumulus castellanus observed in the morning is often a good precursor to thunderstorm activities.

32 Mixing & Stratocumulus
When air is stable and close to saturation, then forced wind mixing by the atmosphere: a) increases the environmental lapse rate b) moves moist low-level air aloft The cooler and moister air aloft then condenses into a deck of clouds. 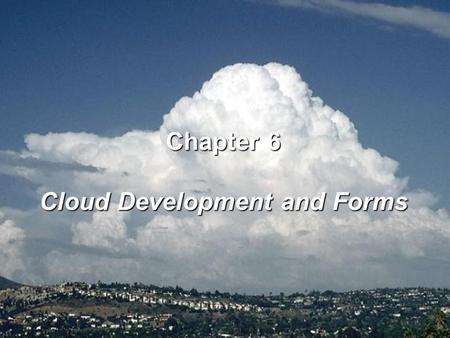 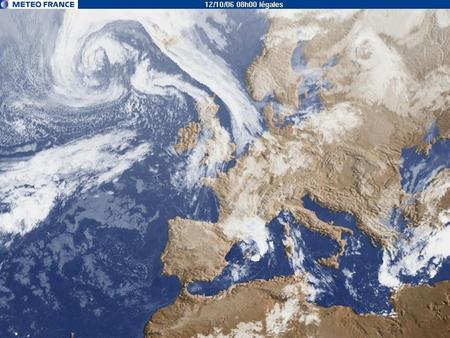 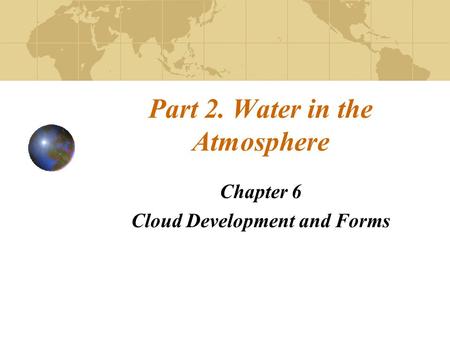 Part 2. Water in the Atmosphere Chapter 6 Cloud Development and Forms. 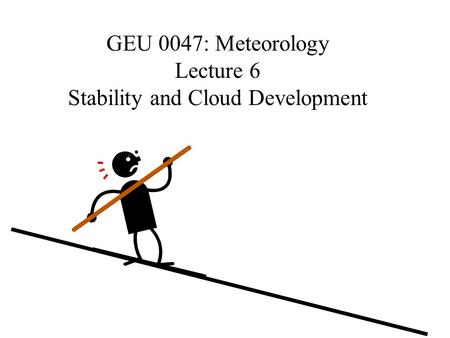