The Incredible Incas: Children of the Sun. Who Were the Incas? The Incas were a small tribe of South American Indians who lived in the city of Cuzco,

Presentation on theme: "The Incredible Incas: Children of the Sun. Who Were the Incas? The Incas were a small tribe of South American Indians who lived in the city of Cuzco,"— Presentation transcript:

1 The Incredible Incas: Children of the Sun

2 Who Were the Incas? The Incas were a small tribe of South American Indians who lived in the city of Cuzco, high in the Andes Mountains of Peru. Around 1400 CE, a neighboring tribe attacked the Incas, but the Incas won. This was the beginning of the Inca Empire. In only 100 years, the Inca Empire grew so big that it expanded into what are now the modern countries of Ecuador, Peru, Chile, Bolivia and Argentina.

3 Inca Government One thing that helped the Incas grow so rapidly was their system of a strong central government. Everybody worked for the state, and in turn the state looked after everybody. Sapa Inca: The head of government was the Inca, sometimes called the “Sapa Inca” (“the Only Inca”). The Sapa Inca was all-powerful. Everything belonged to the Sapa Inca. He ruled his people by putting his relatives in positions of power. Since punishment was harsh and swift, almost no one broke the law.

4 Common People Had No Freedom The Incas were very class conscious and were divided into nobles and common people. The nobles pretty much did what they wanted, while the common people were tightly controlled by the government. Commoners could not own or run businesses. They could only do their assigned jobs. The law did not allow them to be idle. Even the amount of time they had to sleep and bathe was controlled by a government official.

5 Service Tax Local officials kept an detailed census. A census is an official count of all the people in an area and how they each make a living. Each common person was listed in the census. Each person listed had to pay a tax. The Incas loved gold and silver, but they had no use for money. The people paid their tax each year in physical labor—serving in the army, working in the mines, or building roads, temples, and palaces.

6 Harsh Government Controls Laws dictated who should work where, and when. Local officials had the power to make all decisions about the lives of the people they ruled. Inspectors visited frequently to check on things. Breaking the law usually meant the death penalty. Few people broke the law. Tight government controls kept the common people fed, clothed, and enslaved.

7 Government Questions 1.What was the service tax? 2.Who decided how much service tax was due? 3.Who was the head of Inca government? 4.What freedoms did the common people enjoy?

8 Geography Another thing that helped the Inca Empire grow so rapidly was its geography. The empire had three main geographical regions: Each was a natural barrier. The Incas made their home between the jungle and the desert, high in the Andes Mountains of South America. 1. The Andes Mountains 2. The Amazon jungle 3. The coastal desert

9 Andes Mountains The snow-capped Andes Mountains run north to south. They have sharp ragged peaks and deep gorges. The Incas built bridges across the gorges so they could reach all parts of their empire quickly and easily. If an enemy approached, the Incas could burn the bridges. They made suspension bridges from rope, pontoon bridges from reed boats, and pulley baskets from vines.

10 Inca Roads High in the Andes Mountains, the Incas connected their empire with 14,000 miles of well-built roads. Some sections of road were over 24 feet wide. Some were even paved. Some roads were so steep that the Incas built stone walls along the edge to prevent people from falling off the cliff. The roads belonged to the government. No one could travel the roads without special permission.

Download ppt "The Incredible Incas: Children of the Sun. Who Were the Incas? The Incas were a small tribe of South American Indians who lived in the city of Cuzco," 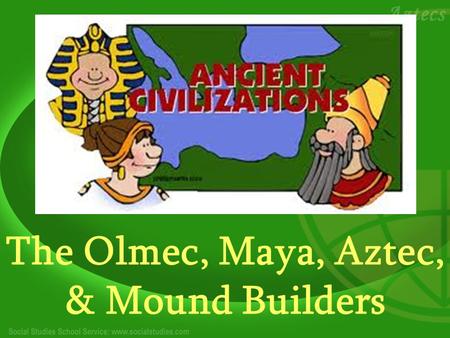 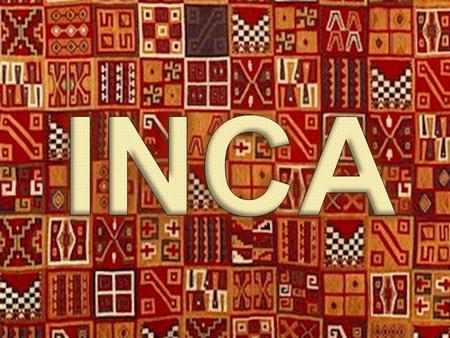 Geography Located on the western side of South America, near present day Peru and Chile. The Andes mountains separate coastal desert from the Amazon. 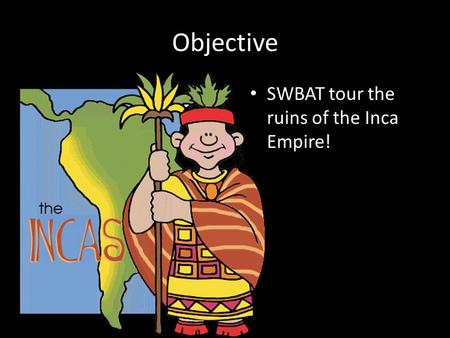 Objective SWBAT tour the ruins of the Inca Empire! 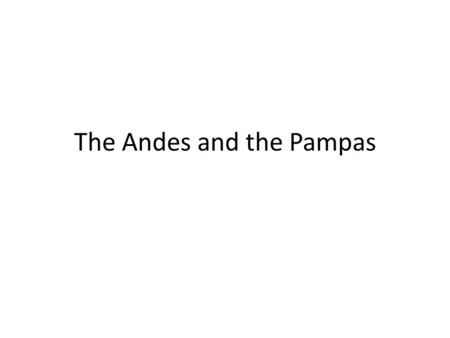 The Andes and the Pampas 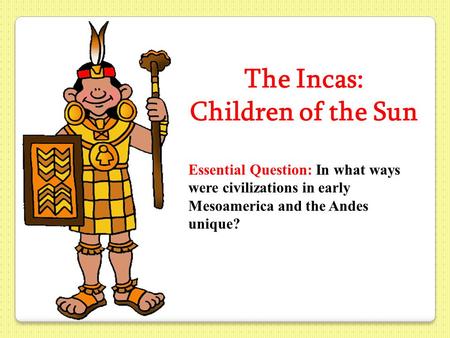 The Incas: Children of the Sun Essential Question: In what ways were civilizations in early Mesoamerica and the Andes unique? 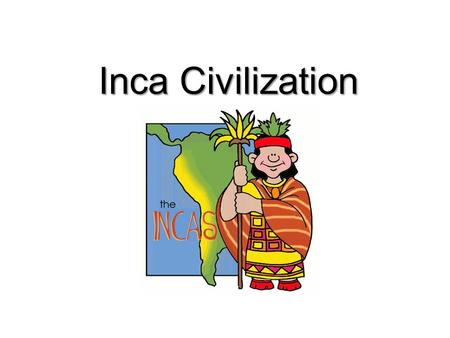 Inca Civilization. Essential Question How were both European and Native American cultures changed after European contact with the Inca? SS6H1a: Describe. 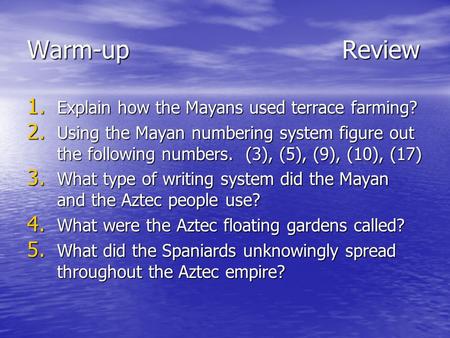 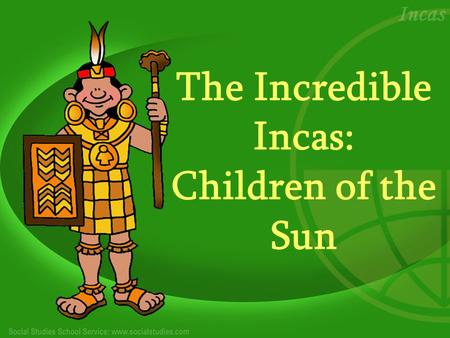 The Incredible Incas: Children of the Sun. 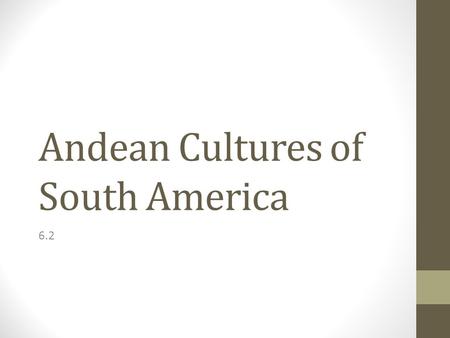 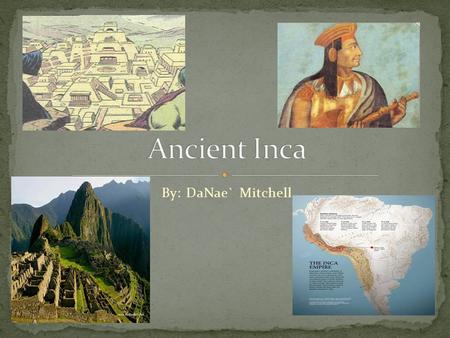 By: DaNae` Mitchell The Incas Empire was located on the western side of south America. Although the Empire was huge, it can be easily divided into three. 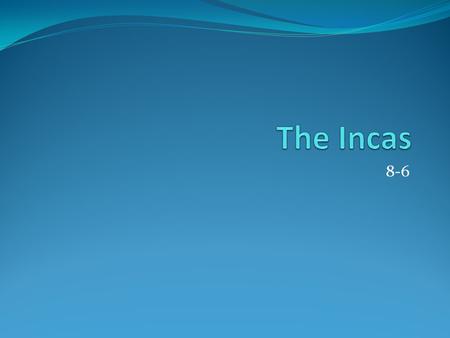 8-6. Introduction A. Incas moved out from Peru at the same time the Aztecs moved into central Mexico B. Established an empire that stretched along the. 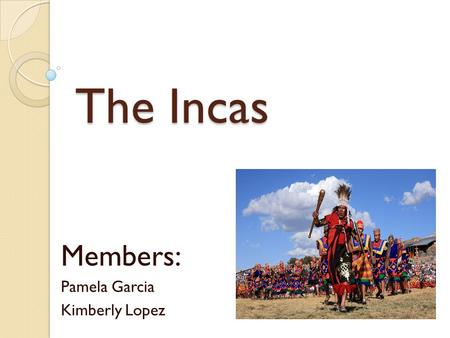 The Incas Members: Pamela Garcia Kimberly Lopez. Development The Incas were people of a powerful empire that ruled part of South America in the 1400s. 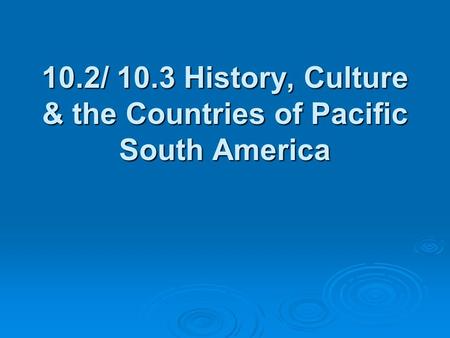 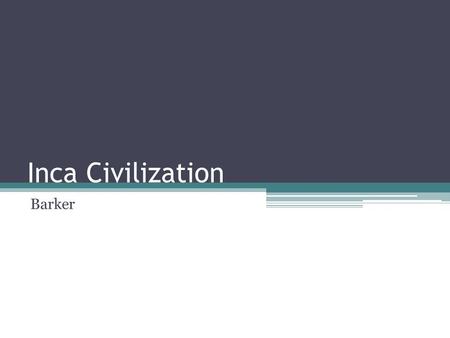 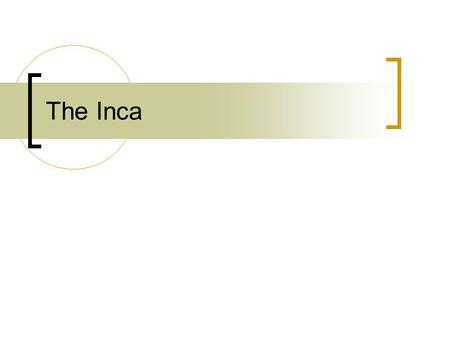 The Inca. Geography of The Inca Empire Inca empire was located on western side of South America Andes Mountains home of Inca empire-used gorges as natural. 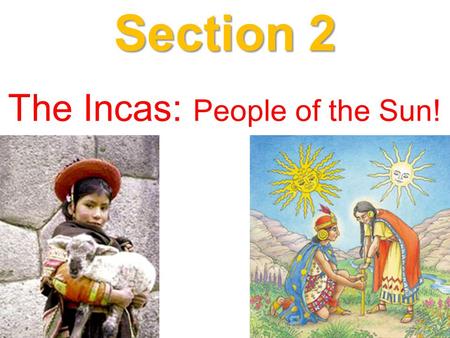 Section 2 The Incas: People of the Sun!. 1. The Incan Civilization dates as far back as 1200AD. 2. However, its reign as a formidable empire of note, 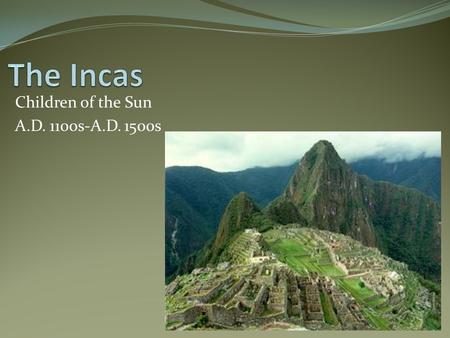 Children of the Sun A.D. 1100s-A.D. 1500s. Beginnings… The Incas started as a small tribe in Cuzco. Fighting over fertile land in the Andes Mountains, 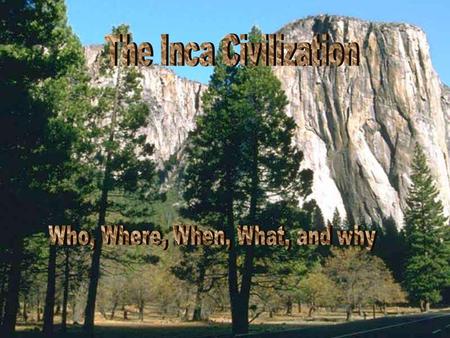 They were an ancient Indian civilization They lived from 1100 A.D. to the early 1500’s They were called the “Children of the Sun” They believed that.