Presentation on theme: "Eye Witness Testimony Objectives 1.Be able to appreciate the importance of memory research 2.Be able to describe the key study 3.Be able to evaluate the."— Presentation transcript:

3 Think about this What is your earliest memory? What do you remember How old were you? Do you really remember it or only think you do from your parents stories?

5 Why is this area important? Devlin Committee (1976) –Those prosecuted after being picked in ID parade 82% convicted –Out of 374 cases where eyewitness only evidence 74% conviction

8 LOFTUS & PALMER What is a leading question ? Have you seen the book? (leading Q) Have you seen a book?(not leading Q) Memory is NOT like a camera - we always reconstruct our memories

9 LOFTUS & PALMER The title of their paper was: The reconstruction of an automobile destruction Their research involved TWO experiments

19 LOFTUS & PALMER - Experiment 2 GROUP 1 was asked How fast were the cars going when they HIT each other?

20 LOFTUS & PALMER - Experiment 2 GROUP 2 was asked How fast were the cars going when they SMASHED INTO each other?

23 LOFTUS & PALMER - Experiment 2 THE CRITICAL QUESTION Did you see any broken glass? This question is not related to the speed directly

26 LOFTUS & PALMER - Experiment 2 What was the DV in the second experiment?

27 LOFTUS & PALMER - Experiment 2 What conclusion can you draw from the results?

33 Q4 What was the dependent variable in Experiment 1? A.number of accidents recalled B.broken glass seen C.estimate of speed D.written account of accident

35 Q6 Which of the following was a dependent variable in Experiment 2? A.estimate of size of car B.whether broken glass seen C.participants written account of accident D.whether participant passed driving test

39 Q10 How long was left between showing the films and asking about the broken glass? A.24 hours B.1 hour C.1 week D.1 month

41 Q12 What did Loftus and Palmer conclude about leading questions? A.They can influence memory. B.They have no effect on memory. C.They only effect students. D.They only work with car accidents.

46 Eye Witness testimony Do you think that UNSUPPORTED EYE WITNESS TESTIMONY should be sufficient evidence upon which to convict someone ?

47 Exam questions In the study by Loftus & Palmer, the subjects were shown film clips of car accidents. Identity two differences between witnessing these film clips and witnessing a real accident and, for each difference say how this might affect the results of the study. (4 marks)

48 Exam questions In the study by Loftus and Palmer on eyewitness testimony, the subjects gave different estimates of the speed of the cars depending on how the question was asked. Give two explanations for this. (4 marks)

49 Exam questions In the study by Loftus and Palmer (eyewitness testimony), the participants were shown film clips of car accidents. Suggest two ways in which the ecological validity of this study could be improved. (4 marks)

Download ppt "Eye Witness Testimony Objectives 1.Be able to appreciate the importance of memory research 2.Be able to describe the key study 3.Be able to evaluate the." 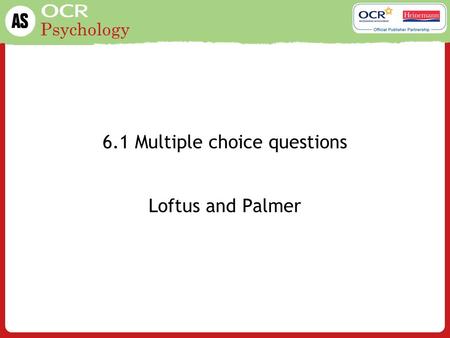