3 Basic Terminology Computer A device that accepts input, processes data, stores data, and produces output, all according to a series of stored instructions. Hardware Includes the electronic and mechanical devices that process the data; refers to the computer as well as peripheral devices. Software A computer program that tells the computer how to perform particular tasks. Network Two or more computers and other devices that are connected, for the purpose of sharing data and programs. Peripheral devices Used to expand the computer’s input, output and storage capabilities.

4 Basic Terminology Input Whatever is put into a computer system. Data Refers to the symbols that represent facts, objects, or ideas. Information The results of the computer storing data as bits and bytes; the words, numbers, sounds, and graphics. Output Consists of the processing results produced by a computer. Processing Manipulation of the data in many ways. Memory Area of the computer that temporarily holds data waiting to be processed, stored, or output. Storage Area of the computer that holds data on a permanent basis when it is not immediately needed for processing.

6 Microcomputer A personal computer; designed to meet the computer needs of an individual. Provides access to a wide variety of computing applications, such as word processing, photo editing, e-mail, and internet.

7 Desktop Computer A computer that fits on a desk and runs on power from an electrical wall outlet. The CPU can be housed in either a vertical or a horizontal case. Has separate components (keyboard, mouse, etc.) that are each plugged into the computer.

8 Laptop Computer A portable, compact computer that can run on an electrical wall outlet or a battery unit. All components (keyboard, mouse, etc.) are in one compact unit. Laptops are usually more expensive than a comparable desktop. Sometimes called a Notebook.

18 Mouse An input device that allows the user to manipulate objects on the screen by moving the device along the surface of a desk. They can we wired or wireless.

23 Storage Devices Used to keep data when the power to the computer is turned off. Different forms Hard disk Flash drive or thumb drive CD 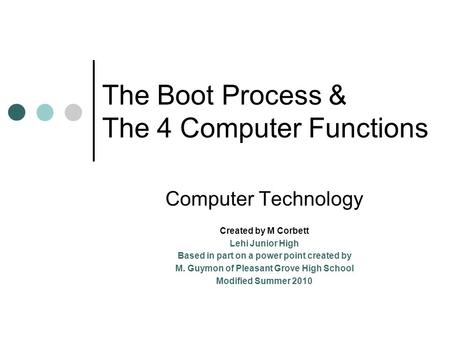 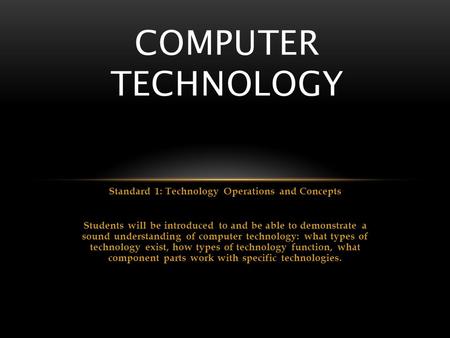 Standard 1: Technology Operations and Concepts Students will be introduced to and be able to demonstrate a sound understanding of computer technology: