The Rise of Hitler and beginnings of war SWBAT: EXPLAIN HOW HITLER WAS ABLE TO CONQUER EUROPE AT THE BEGINNING OF HIS QUEST FOR GLOBAL DOMINATION. HOMEWORK:

Presentation on theme: "The Rise of Hitler and beginnings of war SWBAT: EXPLAIN HOW HITLER WAS ABLE TO CONQUER EUROPE AT THE BEGINNING OF HIS QUEST FOR GLOBAL DOMINATION. HOMEWORK:"— Presentation transcript:

1 The Rise of Hitler and beginnings of war SWBAT: EXPLAIN HOW HITLER WAS ABLE TO CONQUER EUROPE AT THE BEGINNING OF HIS QUEST FOR GLOBAL DOMINATION. HOMEWORK: FINISH “LETTER TO ROOSEVELT” ACTIVITY IF NOT FINISHED IN CLASS AND VOCAB DUE WEDNESDAY DO NOW: USING YOUR HOMEWORK, WHICH EVENT DO YOU THINK WAS THE MOST IMPORTANT? WHY?

3 Hitler Gains Popularity…But why?  In the early 1930s, the mood in Germany was grim.  The worldwide economic depression had hit the country especially hard and unemployment was high.  Germany's humiliating defeat during World War I was still humiliating.  Germans lacked confidence in their weak government, known as the Weimar Republic.  Hitler was a powerful and spellbinding speaker who attracted a wide following of Germans desperate for change.  He promised a better life and a new and glorious Germany.  The Nazis appealed especially to the unemployed, young people, and members of the lower middle class.

4 Nazism becomes popular quickly  The party's rise to power was rapid.  In the 1924 elections, the Nazis were practically unknown, winning only 3 percent of the vote to the Reichstag (German parliament)  In the 1932 elections, the Nazis won 33 percent of the votes, more than any other party.  In January, 1933 Hitler was appointed chancellor, the head of the German government, and many Germans believed that they had found a savior for their nation.  Hitler quickly dismantled the Weimar Republic and est. the Third Reich.

5 Going back to yesterday…  What was the League of Nations response to aggression from world powers (i.e. Italy attacking Ethiopia, Japan attacking Manchuria, etc.)?  What message does this send to someone like Hitler who is looking for room to expand?

6 Austria Falls  November, 1937 Hitler met with his top military advisors and declared that he planned to absorb Austria and Czechoslovakia into the Third Reich.  Why Austria?  A majority of Austria’s 6 million people identified themselves as German and supported unification with Germany.  In March, 1938, German troops marched into Austria unopposed.  The U.S. and the rest of the world did nothing.

7 Czechoslovakia  Like Austria, there were many people living on the Germany/Czech border who identified themselves as German.  This area was called Sudetenland.  Hitler claimed that the Czechs were abusing the Sudeten Germans.  Newspapers ran headlines like “Germans run down by Czech tanks killing women and children” Germany Sudetenland

8 The Sudetenland Falls  Earlier in the crisis, both France and Great Britain claimed they would protect Czechoslovakia.  Hitler invited the French premier and British Prime Minister Neville Chamberlain to Munich, Germany and told them this would be his last demand.  Eagar to avoid war, they both chose to believe him and signed the Munch Agreement which turned the Sudetenland over to Germany with no shots being fired.  Thus began the policy of appeasement: giving up principles to pacify an aggressor.

9 Not everyone agrees with appeasement…  Winston Churchill, the main political opponent of Neville Chamberlain, disagreed with this policy and stated:  “Britain and France had to choose between war and dishonor. They chose dishonor. They will have war.”  What is Churchill saying in this quote?

11 The Invasion of Poland Begins  Poland, like Czechoslovakia and Austria, also had a sizeable German-speaking population.  Again, Hitler claims the Poles were abusing the German population.  Invading Poland, however, would cause a conflict with Russia, Poland's neighbor to the east.  Invading Poland would also probably lead to a declaration of war by England and France, which could mean a 2 front war.

12 Stalin’s Surprises Everyone  Stalin surprised England and France by signing a nonaggression pact with Germany, their once bitter WWI enemy.  It agreed they would not attack one another.  They also signed another secret pact agreeing to divide Poland between them.  With the elimination of the 2 front war, Poland’s fate was sealed.

13 Invasion of Poland  Using blitzkrieg (lightning war) tactics, Poland quickly fell.  Utilized advances in military technology, such as fast tanks and powerful aircraft, to surprise and overwhelm the enemy.  France and Great Britain declare war on Germany.  Poland is divided in 2 with Germany receiving the western half and the Soviet Union receiving the eastern half.  World War II had officially begun.

14 Activity- a Letter to Roosevelt  One country we have not discussed yet is the U.S., who at this point is staying out of the war in Europe.  Imagine you are Winston Churchill (Prime Minister of England as of 1940).  Write a letter to Franklin Roosevelt explaining the events that are happening in Europe up to 1940 and finish by asking for his assistance in fighting Hitler.  The letter should be a paragraph in length (6-8 sentences).  Title the document “Letter to Roosevelt” and put it in your US I folder in your drive.  If this is not finished in class, it is for homework.

Download ppt "The Rise of Hitler and beginnings of war SWBAT: EXPLAIN HOW HITLER WAS ABLE TO CONQUER EUROPE AT THE BEGINNING OF HIS QUEST FOR GLOBAL DOMINATION. HOMEWORK:" 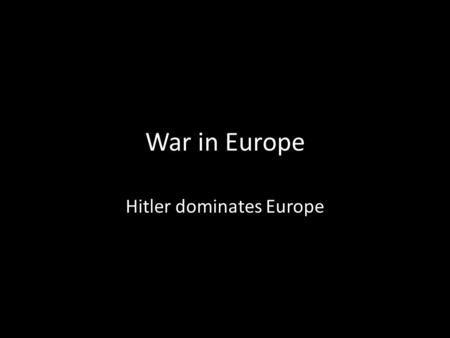 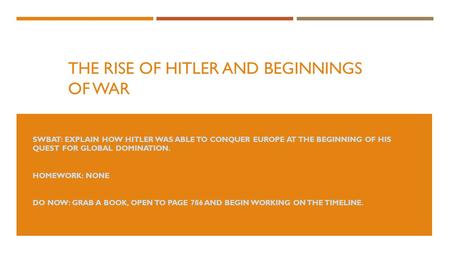 THE RISE OF HITLER AND BEGINNINGS OF WAR SWBAT: EXPLAIN HOW HITLER WAS ABLE TO CONQUER EUROPE AT THE BEGINNING OF HIS QUEST FOR GLOBAL DOMINATION. HOMEWORK: 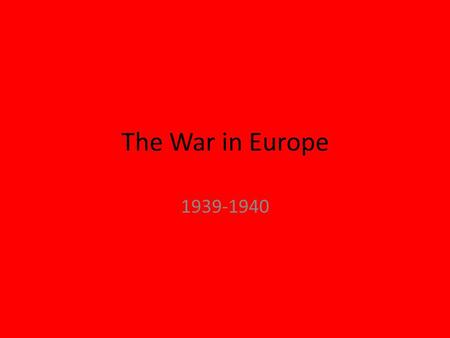 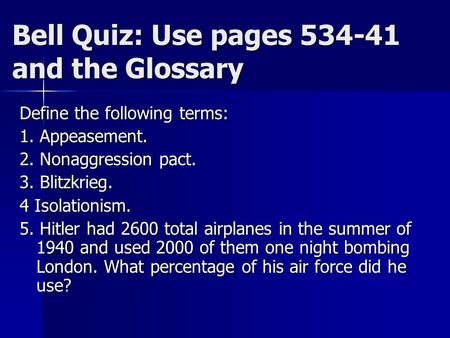 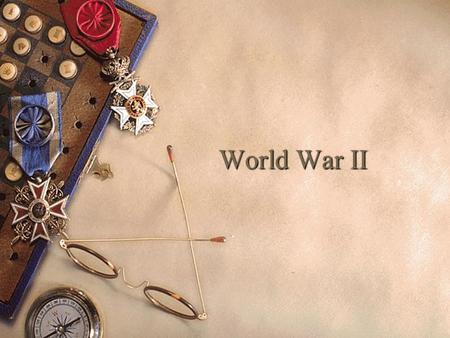 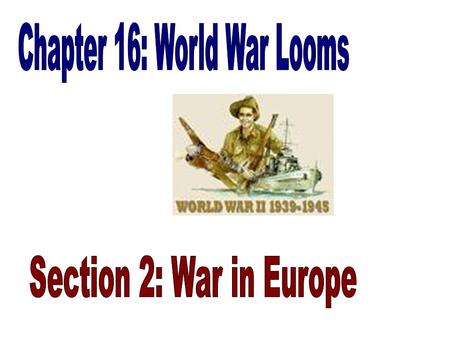 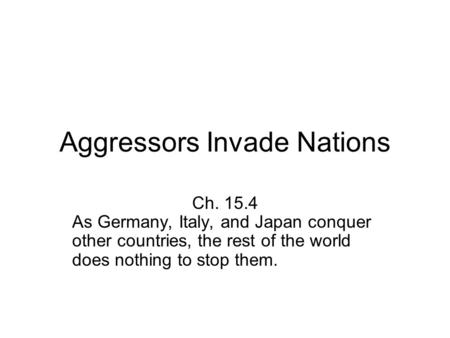 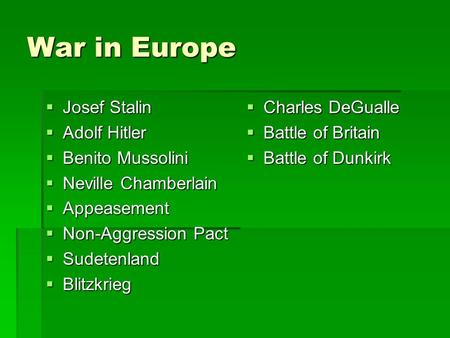