2 Section 4 Farmers in Protest  The supply of crops grew faster than the demand, this caused prices to fall.  At the same time, farmers’ expenses remained high.  Farmers blamed the railroads for high shipping costs.  Farmers also blamed manufacturers in the East for charging high prices. After the Civil War, farming expanded in the West and South.

3  They resented banks for charging high interest rates.  The first farmers’ organization was the National Grange.  The Grange tried to get farmers to support themselves without help from others.  The Farmers’ Alliances were also set up to help farmers. Farmers in Protest

4 Party of the People  They formed a political party called the People’s Party of the U.S.A. was also known as the Populist Party. It appealed to the common people.  Democrat William Jennings Bryan and Republican William McKinley ran for president in 1896  By election time, the economy was improving, and McKinley won by a landslide. In 1890 the Farmers’ Alliances got involved in political campaigns.

5  Despite the loss, the Populist Party made a difference; in the 1900s, the nation ended the gold standard.  It also adopted an eight-hour workday, an income tax, and the direct election of senators. Party of the People 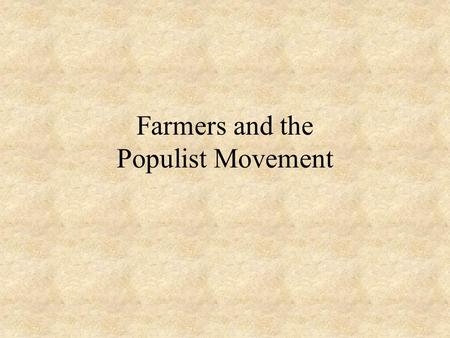