4 Federal Regulation and State Rule Federal Regulation and State Rule The Federal rule or Smart Snacks will be in effect July 1, 2014. The State rule was finalized in December of 2011 and set into law at that time. Found within the school approval rules of the minimum standards aka: Administrative Rules. Do not offer nutrition standards, but direct the use of the USDA standards as well as the A-List or the Alliance’s list.

5 Snacks are typically found in the following areas: A la carte in the cafeteria in school stores snack bars vending machines other venues Snacks

7 What are competitive foods? Competitive foods: Federal Rule defines it as all food and beverages sold to students on the school campus during the school day, other than those meals reimbursed under school meals programs. State rule definition goes a bit further to include foods offered to students such as those at birthday parties.

8 Where do the standards apply? School campus: all areas of the property under the jurisdiction of the school that are accessible to students during the school day. Definition same for both state and federal rules.

9 When do the standards apply? School day definition for competitive foods only: Federal rule* - is the period from the midnight before, to 30 minutes after the end of the official school day. State Rule – is the period from bell to bell. *The federal rule trumps because it is more stringent.

13 Standards for Foods Federal Rules: Apply to All Grade Levels Include General Standards and Specific Nutrient Standards Exemptions to Nutrient Standards for Specific Foods Allow broader exemptions for fruits and vegetables and some NSLP/SBP foods State Rules follow Federal rules and refer to USDA standards along with the A-List and the Alliance for Healthier Generation list. These lists offer foods and beverages that follow the USDA standards.

14 First Tier for Federal Smart Snack Standard 1) Be a whole grain rich product; OR 2) Have as the first ingredient, a fruit, vegetable, dairy product or protein food (meat, beans, poultry, etc.); OR 3) Be a “combination food” with at least ¼ cup fruit and/or vegetable; OR 4) Contain 10% of the Daily Value of one nutrient of public health concern (only through June 30, 2016) Calcium, potassium, vitamin D, dietary fiber

15 Smart Snack Whole Grain Rich Definition (1) Be a whole grain rich product Grain products must include 50% or more whole grains by weight or have a whole grain as the first ingredient. Consistent with NSLP meal pattern standards and the HUSSC whole grain requirement. Practical considered so because it can be easily identified by reading a product label.

17 DGA Major Food Groups and Relationship to the Smart Snacks (2) Relates back to the Dietary Guidelines for Americans (DGA) and states: have as the first ingredient a fruit, vegetable, dairy product or protein food (meat, beans, poultry, etc.)

18 Combination Foods and Smart Snacks (3) Be a “combination food” with at least ¼ cup fruit and/or vegetable Combination foods means products that contain two or more components representing two or more of the recommended food groups: fruit, vegetable, dairy, protein or grains. Examples of such foods include yogurt and fruit, hummus and vegetables, fruit cobbler with whole grain rich crust, etc.

19 Nutrients of Public Health Concern Phased-In Approach: (4) Through June 30, 2016, foods that contain 10% of the Daily Value of one nutrient of public health concern (i.e., calcium, potassium, vitamin D, or dietary fiber) Effective July 1, 2016, this criterion is removed based on DGA language that encourages least processed foods. Allowable competitive foods must be food group based after that date and gives industry time to reformulate product from a non-natural nutrient state to a more naturally occurring nutrient state.

21 Accompaniments in Smart Snacks Must be included in nutrient profile as a part of item served Examples include: Salad dressings Butter or jelly on toast Cream cheese on bagels Garnishes, etc. No pre-portioning required – may determine average portion

22 Total Fat Standard in Smart Snacks ≤35% of total calories from fat per item as packaged/served Exemptions include: Reduced fat cheese; Nuts and seeds and nut/seed butters; Dried fruit with nuts and/or seeds with no added nutritive sweeteners or fat; Seafood with no added fat; and Part-skim mozzarella

45 No “Time and Place” Restriction No restriction on the sale of any allowable beverage at any grade level, during the school day anywhere on the school campus.

46 Caffeine in Smart Snacks Elementary/Middle School: Foods and beverages must be caffeine-free, with the exception of trace amounts of naturally- occurring caffeine substances. High School: No caffeine restrictions.

47 FUNDRAISERS IN FEDERAL AND STATE RULE

48 Fundraisers All foods that meet the regulatory standards may be sold at fundraisers on the school campus during school hours. The standards would not apply to items sold during non-school hours, weekends, or off-campus fundraising events.

49 Fundraiser Exemption and State Rule Due to the State Administrative Rule, NH will not exempt a limited number of fundraisers that do not meet the nutrition standards. Thus we have zero exemptions. School districts may institute additional standards. Note: Even if there were exempt fundraiser foods or beverages, none of these may be sold in competition with school meals in the food service area during the meal service.

53 Monitoring and Compliance State agencies will monitor compliance with the standards through a review of SAU records as part of the State agency administrative review. If violations have occurred, technical assistance and corrective action plans would be required. 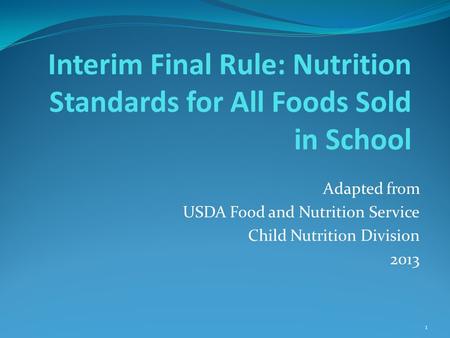 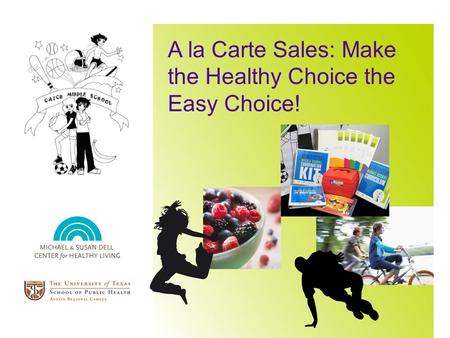 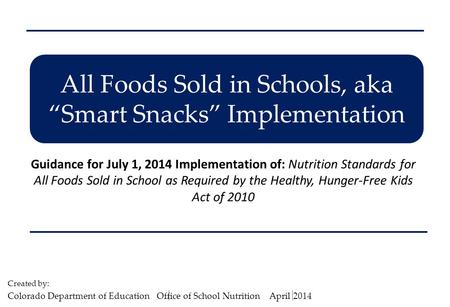 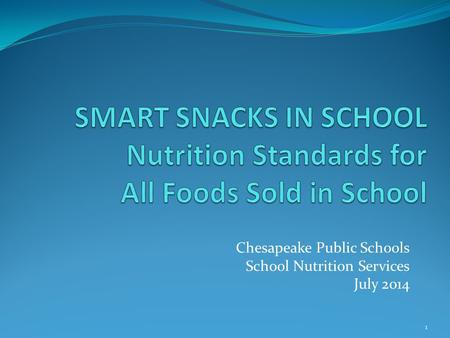 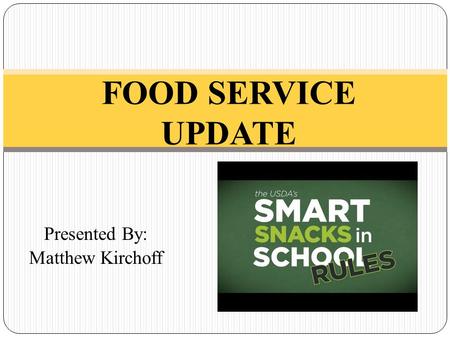 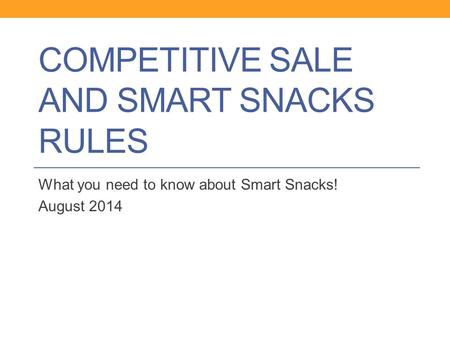 COMPETITIVE SALE AND SMART SNACKS RULES What you need to know about Smart Snacks! August 2014. 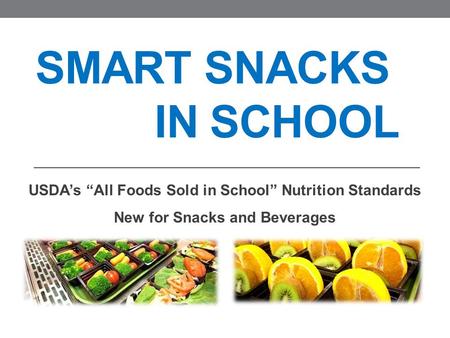 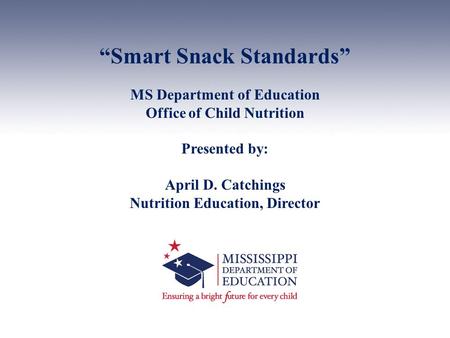 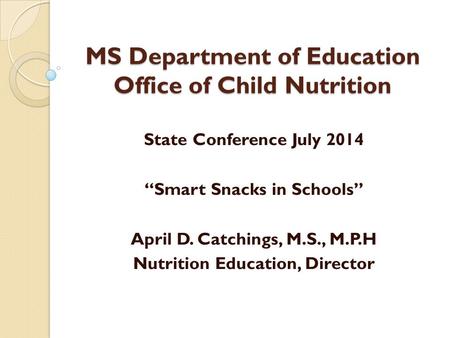 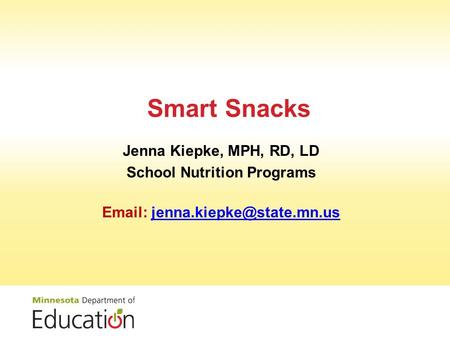 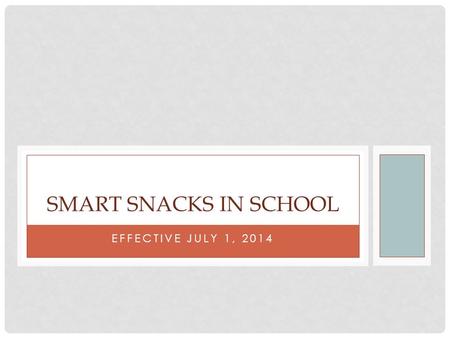 EFFECTIVE JULY 1, 2014 SMART SNACKS IN SCHOOL. INTERIM PROPOSED RULE All foods sold on a school’s campus, during a school day are required to meet particular. 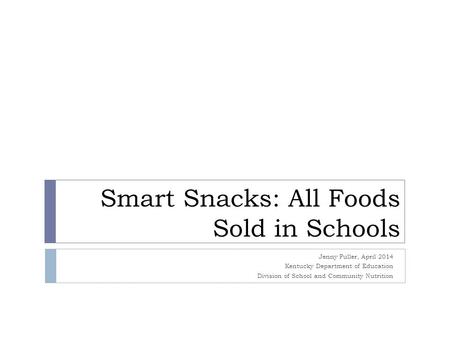 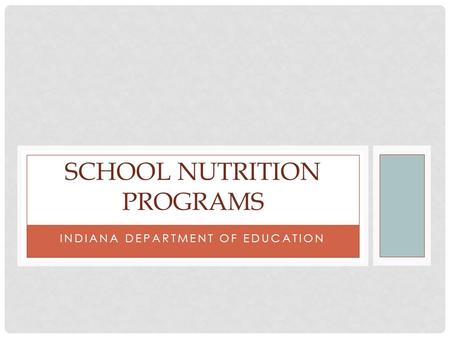 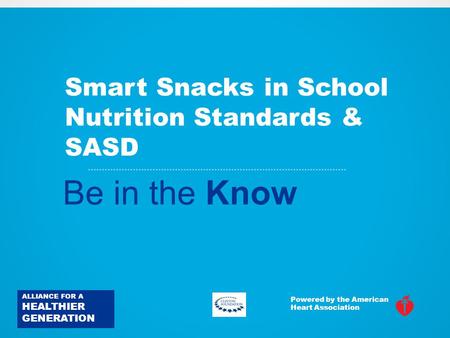 Smart Snacks in School Nutrition Standards & SASD Be in the Know ALLIANCE FOR A HEALTHIER GENERATION Powered by the American Heart Association. 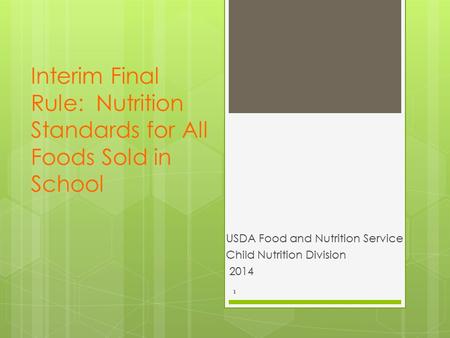 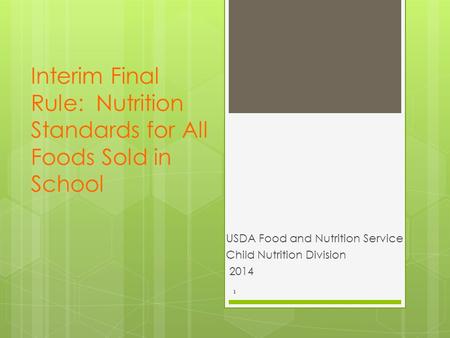 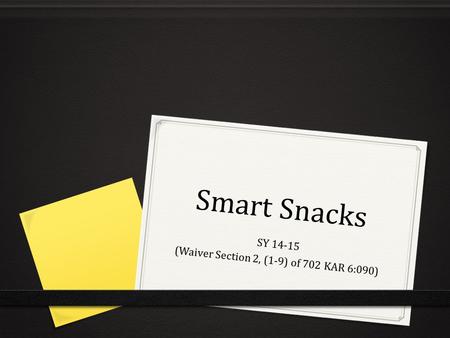 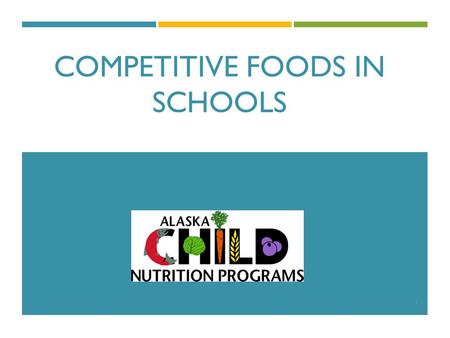 COMPETITIVE FOODS IN SCHOOLS 1. THE SCHOOL NUTRITION ENVIRONMENT Improving the nutritional profile of all foods sold in school is critical to: improving. 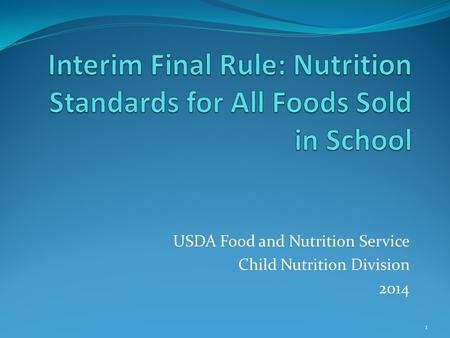 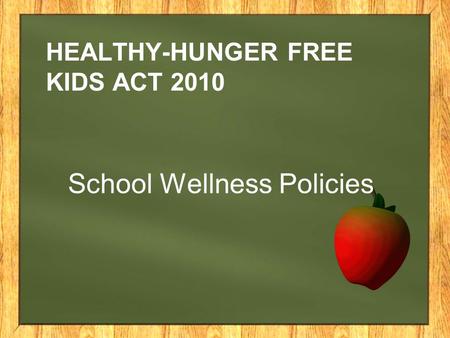