2 These honey mushrooms are part of the visible portion of the largest organism on Earth.
A single honey mushroom colony in Oregon covers and area of 8.9 sq. km (2200 acres). Figure: 20-CO Title: The Diversity of Fungi Caption:

4 Section 22.1 Outline 22.1 What Are the Key Features of Fungi?
Fungal Bodies Consist of Slender Threads Fungi Obtain Their Nutrients from Other Organisms Fungi Propagate by Spores Most Fungi Can Reproduce Both Sexually and Asexually

5 Fungal Body Structure Most fungi are multicellular
Cells are surrounded by cell walls composed of chitin, a nitrogen-containing polysaccharide Body of almost all fungi is a mycelium, an interwoven mass of threadlike filaments called hyphae (singular, hypha)

6 FIGURE 22-1 (part 1) The filamentous body of a fungus
(a) A fungal mycelium spreads over decaying vegetation. The mycelium is composed of (b) a tangle of microscopic hyphae, only one cell thick, portrayed in cross section (c) to show their internal organization.

7 Fungal Body Structure Hyphae of most species are divided into many cells by partitions called septa (singular, septum); each cell possesses one or more nuclei Pores in the septa allow cytoplasm to stream from one cell to the next Hyphae of some fungi lack septa, consisting of single elongated cells with hundreds or thousands of nuclei The nuclei of most species are haploid

8 FIGURE 22-1 (part 2) The filamentous body of a fungus
The mycelium is composed of (b) a tangle of microscopic hyphae, only one cell thick, portrayed in cross section (c) to show their internal organization.

11 FIGURE 22-2 Some fungi can eject spores
A ripe earthstar mushroom, struck by a drop of water, releases a cloud of spores from the fruiting body that will be dispersed by air currents.

12 Asexual Reproduction Typically occurs under stable conditions
Can occur either by: Fragmentation of the mycelium Asexual spore formation Haploid mycelium produces haploid asexual spores by mitosis Spores germinate and develop into a new mycelium by mitosis Results in the rapid production of genetically identical clones

13 Sexual Reproduction Typically occurs under conditions of environmental change or stress Neighboring haploid mycelia of different, but compatible mating types come into contact with each other The two different hyphae fuse so that the nuclei share a common cell The different haploid nuclei fuse to form a diploid zygote Zygote undergoes meiosis to form haploid sexual spores

19 The Chytrids The Chytrids Most are aquatic
Reproduce both asexually and sexually Form flagellated spores that require water for dispersal Figure 22-4, p. 426, illustrates the chytrid fungus Allomyces in the midst of sexual reproduction

21 The Chytrids Most feed on dead aquatic material
Some species are parasites of plants and animals One chytrid species is a frog pathogen believed to be a major cause of the current worldwide die-off of frogs According to evolutionists, primitive chytrids are believed to have given rise to the other groups of modern fungi

23 The life cycle of a zygomycete
FIGURE 22-5 The life cycle of a zygomycete Top: in asexual reproduction in the black bread mold (genus Rhizopus), haploid spores, produced within sporangia, disperse and germinate on food such as bread. Bottom: During sexual reproduction, hyphae of different mating types (designated + and - on the bread) contact one another and fuse, producing a diploid zygospore. The zygospore undergoes meiosis and germinates, producing sporangia that liberate haploid spores.

29 FIGURE 22-8 The life cycle of a typical basidiomyce

31 FIGURE 22-9c Diverse basidiomycetes
(c) The spores of stinkhorns are carried on the outside of a slimy cap that smells terrible to humans, but appeals to flies. The flies lay their eggs on the stinkhorn, and inadvertently disperse the spores that stick to their bodies.

33 Fairy Rings A fairy ring is a circular pattern of mushroom growth
Fairy rings form at the leading edge of an expanding underground fungal mycelium The wider the diameter of the ring, the older the mycelium Some fairy rings are estimated to be 700 years old

34 FIGURE 22-10 A mushroom fairy ring
Mushrooms emerge in a fairy ring from an underground fungal mycelium, growing outward from a central point where a single spore germinated, perhaps centuries ago.

35 Section 22.3 Outline 22.3 How Do Fungi Interact with Other Species?
Lichens Are Formed by Fungi That Live with Photosynthetic Algae or Bacteria Mycorrhizae Are Fungi Associated with Plant Roots Endophytes Are Fungi That Live Inside Plant Stems and Leaves Some Fungi Are Important Recyclers

38 FIG 22-11 The lichen: A symbiotic partnership
Most lichens have a layered structure bounded on the top and bottom by an outer layer formed from fungal hyphae. The fungal hyphae emerge from the lower layer, forming attachments that anchor the lichen to a surface, such as a rock or a tree. An algal layer in which the alga and fungus grow in close association lies beneath the upper layer of hyphae.

40 FIG 22-12a Diverse lichens (a) A colorful encrusting lichen, growing on dry rock, illustrates the tough independence of this symbiotic combination of fungus and algae. (b) A leafy lichen grows from a dead tree branch.

41 Mycorrhizae Mycorrhizae (singular, mycorrhiza) are symbiotic associations between fungi and plant roots Fungus provides plant with water, minerals, and organic nutrients it absorbs from the soil Plant provides fungus with food (sugar) 80% of plants with roots have mycorrhizae Relationship may have helped plants colonize land

42 FIGURE 22-13 Mycorrhizae enhance plant growth
Hyphae of mycorrhizae entwining about the root of an aspen tree. Plants grow significantly better in a symbiotic association with these fungi, which help make nutrients and water available to the roots.

43 Endophytes Endophytes are fungi that live inside the above-ground tissues of plants Some are parasites that cause plant diseases Some are beneficial to host plants Some ascomycete species live inside grasses and produce substances that are distasteful or toxic to insects and grazing mammals, protecting the grasses from predation

44 Recyclers Fungi are Earth’s undertakers, feeding on the dead of all kingdoms Fungal saprophytes (feeding on dead organisms) release extracellular substances that digest the tissues of the dead and liberate carbon, nitrogen, phosphorus compounds, and minerals that can be reused by plants

47 FIGURE Corn smut This basidiomycete pathogen destroys millions of dollars' worth of corn each year. Even a pest like corn smut has its admirers, though. In Mexico this fungus is known as huitlacoche and is considered to be a great delicacy.

50 FIGURE 22-15a Helpful fungal parasites
Fungal pathogens can be helpful to humans. For example, fungi such as (a) the Cordyceps species that has killed this grasshopper are used by farmers to control insect pests.

51 FIGURE 22-15b Helpful fungal parasites
(b) Some fungi might one day be used to help protect humans from disease. A malaria-carrying mosquito infected by Beauveria species is transformed from a healthy animal (top) to a fungus-encrusted corpse in less than two weeks.

54 FIGURE 22-16 The unusual yeast
Yeasts are unusual, normally non-filamentous ascomycetes that reproduce most commonly by budding. The yeast shown here is Candida, a common cause of vaginal infections.

58 FIGURE Penicillium Penicillium growing on an orange. Reproductive structures, which coat the fruit's surface, are visible, while hyphae beneath draw nourishment from inside. The antibiotic penicillin was first isolated from this fungus.

61 Fungi Contribute to Gastronomy
Yeasts are used in the production of wine, beer, and bread Wine is produced when yeasts ferment fruit sugars; ethyl alcohol is retained, while CO2 is released

64 FIGURE The truffle Truffles, rare ascomycetes (each about the size of a small apple), are a gastronomic delicacy.

65 Fungal Ingenuity The truffle has evolved an effective adaptation for dispersal of its spores Releases an odor which causes pigs and other animals to dig it up, scattering spores to the winds The zygomycete Pilobolus has evolved bulb tops that blast off, spreading spores

66 FIGURE 22-19 An explosive zygomycete
The delicate, translucent reproductive structures of the zygomycete Pilobolus literally blow their tops when ripe, dispersing the black caps with their payload of spores.

68 FIGURE 22-20 Nemesis of nematodes
Arthrobotrys, the nematode (roundworm) strangler, traps its prey in a noose-like modified hypha that swells when the inside of the loop is contacted. 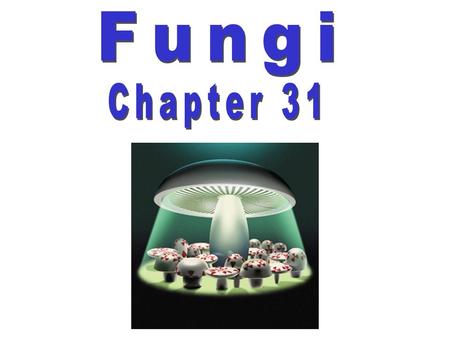 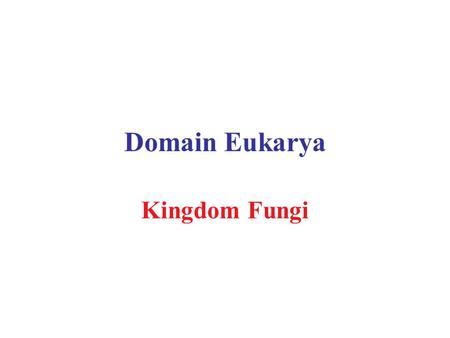 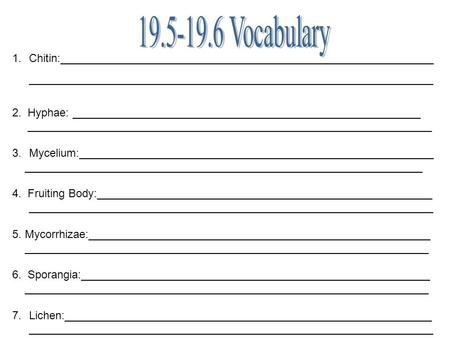 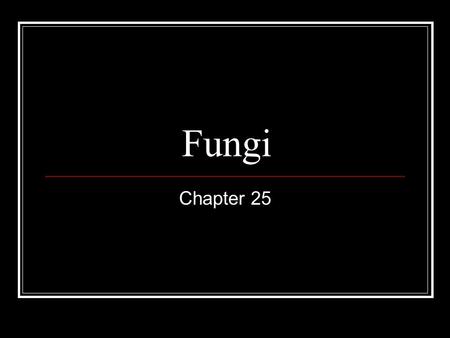 Fungi Chapter 25. Characteristics Eukaryotes Heterotrophs Feed by absorption rather than ingestion Most are decomposers Prefer moist habitats Can survive. 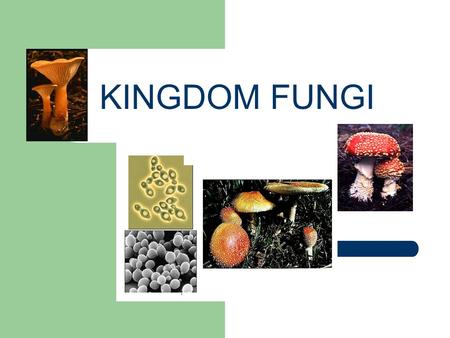 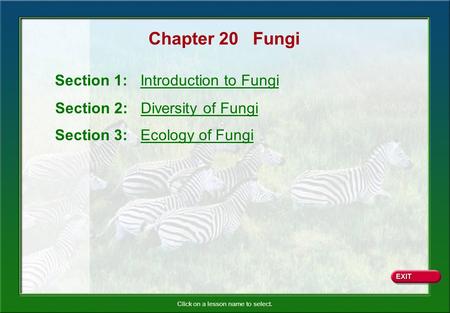 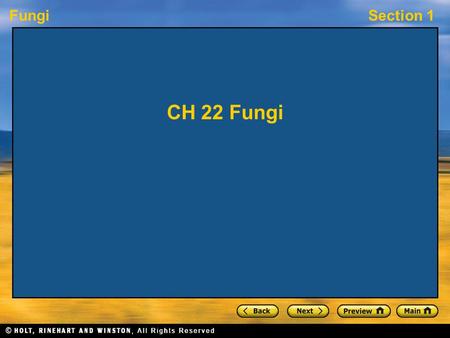 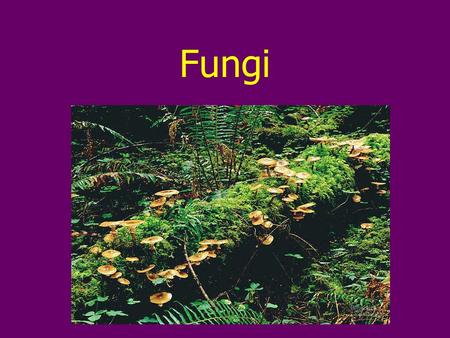 Fungi. Overview Fungi are eukaryotes Most are multicellular Differ from other eukaryotes in nutritional mode, structural organization, growth & reproduction. 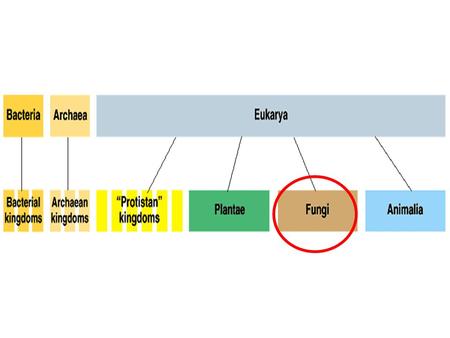 Eukaryotic cells Most are multi-celled Some are uni-cellular Heterotrophs Live in moist, warm areas Have Cell Walls FUNGI. 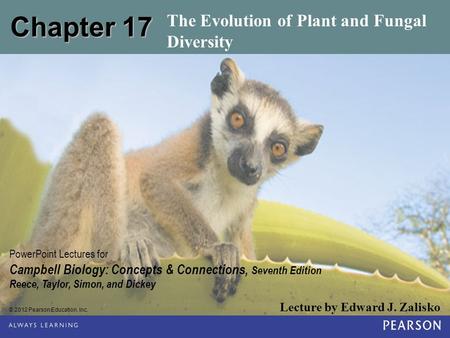 The Evolution of Plant and Fungal Diversity 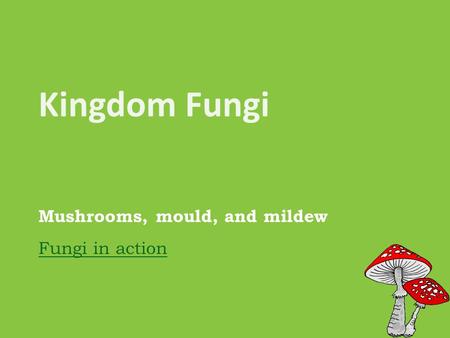 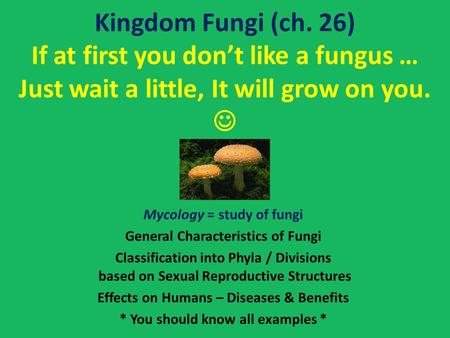 Kingdom Fungi (ch. 26) If at first you don’t like a fungus … Just wait a little, It will grow on you.  Mycology = study of fungi General Characteristics. 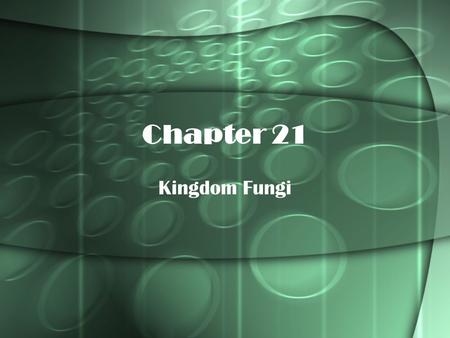 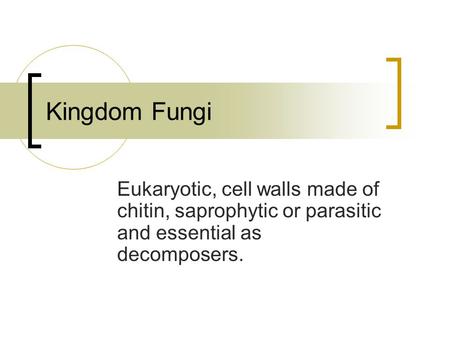 Kingdom Fungi Eukaryotic, cell walls made of chitin, saprophytic or parasitic and essential as decomposers. 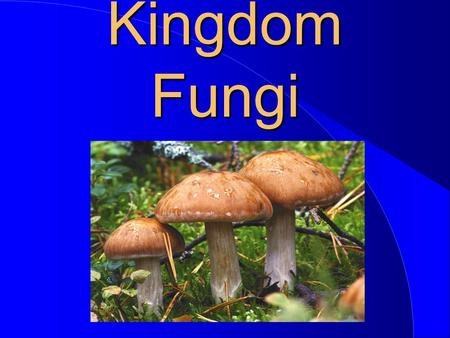 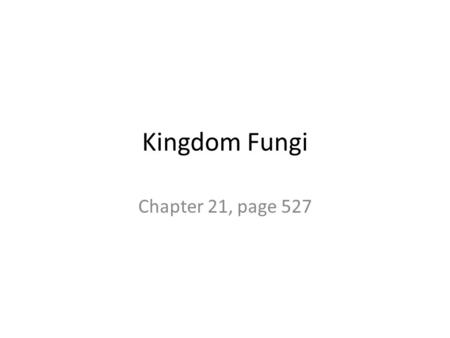 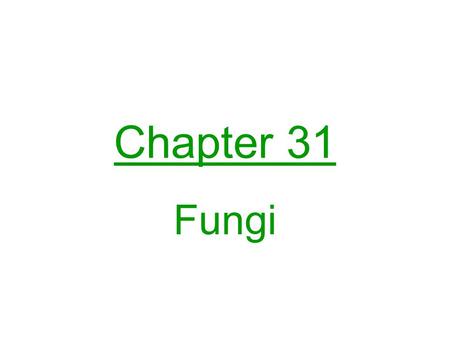 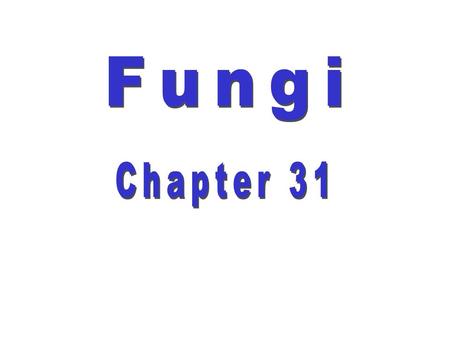 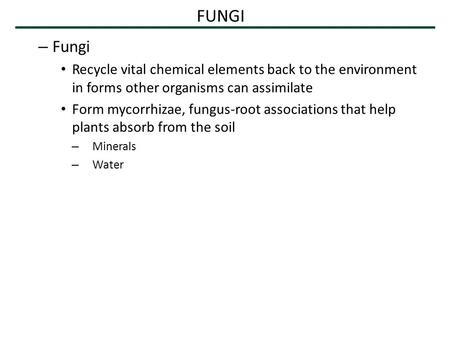 FUNGI – Fungi Recycle vital chemical elements back to the environment in forms other organisms can assimilate Form mycorrhizae, fungus-root associations. 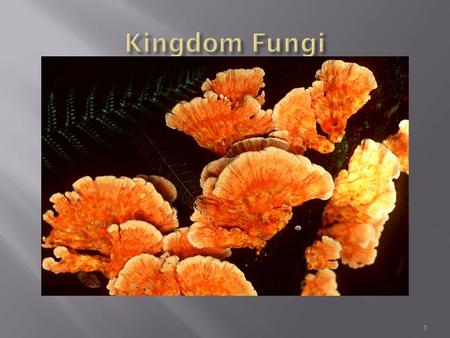 1.  Mushrooms, toadstools, mildews, yeasts and moulds are all members of this kingdom.  Some unicellular fungi, but most are multicellular.  Look similar.