2 Computer Hardware A comprehensive term for all physical parts of a computer, as distinguished from the data it contains or operates on, and the software that provides instructions for the hardware to accomplish tasks. The boundary between hardware and software might be slightly blurry, with the existence of firmware that is software "built into" the hardware. All the physical or tangible parts of a computer Includes the electronic and mechanical devices that process the data; refers to the computer as well as peripheral devices. (Can be seen and touched) Firmware Malware

6 System Unit or Tower Case that holds the power supply, storage devices, and the circuit boards (including the motherboard).

8 Motherboard The central printed circuit board (PCB) of modern computers. Holds many crucial components of the computer system. Provides connectors for peripheral devices. Sometimes known as the main board, system board, or logic board.

10 CPU (Central Processing Unit)
Where the processing in a computer takes place, often called the brain of the computer.

12 Circuits The path from one component of a computer to another.
Data travels through circuits. Circuits run between RAM and the microprocessor RAM and various storage devices

13 Sound Card A circuit board that gives the computer the ability to accept audio input, play sound files, and produce audio output through speakers or headphones.

14 Graphics Card The video card—otherwise called a graphics card, graphics adapter or video adapter—processes the graphics output from the motherboard and transmits it to the display. It is an essential part of modern multimedia-enriched computing. On older models, and today on budget models, graphics circuitry may be integrated with the motherboard, but for modern and flexible machines, they are connected by the PCI, AGP, or PCI Express interface.

15 Input Devices Units that gather and transform information into a series of electronic signals for the computer.

16 Keyboard An arrangement of letters, numbers, and special function keys that act as the primary input device to the computer.

17 Mouse An input device that allows the user to manipulate objects on the screen by moving the device along the surface of a desk.

18 Modem A device that sends and receives data to and from computers over telephone lines or cables.

19 Output Devices Devices that display, print, or transmit the results of processing from the computer’s memory.

20 Monitor Display device that forms an image by converting electrical signals from the computer into points of colored light on the screen. A visual display unit, computer monitor or just display, is a piece of electrical equipment, usually separate from the computer case, which displays visual images without producing a permanent computer record. A display device is usually either a CRT or some form of flat panel such as a TFT LCD. Multi-monitor setups are also quite common. The display unit houses an electronic circuitry that generates its picture from signals received from the computer. Within the computer, either integral to the motherboard or plugged into it as an expansion card, there is pre-processing circuitry to convert the microprocessor's output data to a format compatible with the display unit's circuitry. The images from computer monitors originally contained only text, but asgraphical user interfaces emerged and became common, they began to display more images and multimedia content.

23 Storage Devices Used to keep data when the power to the computer is turned off. Medium/media Place or Disk where data is stored. (Hard Disk, USB Drive, iPod, Floppy Disk, Ect.)

24 Hard Disk/Drive The main storage device for a computer
Usually mounted inside the computer’s system unit and connected to the Motherboard. Can store billions of characters of data. Stated in forms of bytes: Megabytes, Gigabytes, Terabytes, Ext.

26 CD Drives Compact Disc Drives
A storage device that can read and write data, from and to CD’s. Similar to a CD-ROM, but has the ability to write to CD.

27 DVD Drives “Digital Video Disks – Read Only Memory” (4.7 Gb)
Reads data from CD’s (audio and data) and DVD’s (data or movie) Can be used to write data to a disk if DVD-RW.

28 BD Drives Blu-ray Disc Drives
Today you can purchase BD-RE which is Blu-ray Disc Recordable Erasable. Blu-ray drives have all the functions of CD and DVD drives, but can store more data.

30 USB, Jump or Flash Drives
Replaced Zip and Floppy Disks Because: Smaller—size of a key Faster-no bulky cables to hook up—inserts into USB port Cheaper—1 GB for about $6

31 Cloud Storage When storing data in the cloud or on the internet, the data is actually stored on an organizations servers. 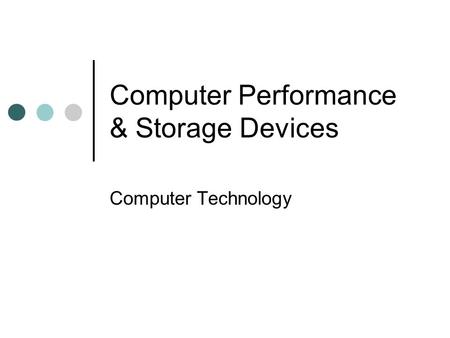