Including Firefighters!!!! Most are due to hazardous materials inhalation or asphyxiation. Most so-called Con-Space Rescues are body recoveries. OSHA.

Presentation on theme: "Including Firefighters!!!! Most are due to hazardous materials inhalation or asphyxiation. Most so-called Con-Space Rescues are body recoveries. OSHA."— Presentation transcript:

4 Most are due to hazardous materials inhalation or asphyxiation. Most so-called Con-Space Rescues are body recoveries. OSHA will come on-site and investigate. The desire to rush in and help must be tempered by an appreciation of the hazards.

5 Is large enough and so configured that an employee can bodily enter and perform assigned work; and Has limited or restricted means for entry or exit Is not designed for continuous employee occupancy

6 Contains or has a potential to contain a hazardous atmosphere; Contains a material that has the potential for engulfing an entrant;

7 Has an internal configuration such that an entrant could be trapped or asphyxiated by inwardly converging walls or by a floor which slopes downward and tapers to a smaller cross-section; or Contains any other recognized serious safety or health hazard.

16 Trenching results in confined spaces. A trench is a narrow excavation below the ground. Trenches are typically deeper than they are wide; however, the width of a trench is less than 15 feet. Employees must follow all the requirements associated with confined spaces when working within trenches. (OSHA Directive)

19 An industrial meter reader employed by a mid-sized city in Ohio began his workday as usual at 7:30 a.m. He did not return to the garage at quitting time (4:00 p.m.) and was found face down in a meter vault at 6:45 p.m.

20 A 31-year-old male assistant construction supervisor (victim) entered an oxygen-deficient manhole to close a valve and collapsed at the bottom. In a rescue attempt a labor foreman (male, age 34) and the victim's supervisor (male, age 36) entered the manhole and also collapsed. All three workers were pronounced dead at the scene by the county coroner.

21 A father and son inspection team, under contract to a petroleum company, were inspecting the seals between the internal panels of a floating roof and the sides of a 150,000 barrel storage tank containing regular gasoline. At 12:30 p.m. the victim's father contacted the yard office and reported that his son was 7 minutes overdue. At 2:30 p.m. the victim's body was located on the opposite side of the tank on top of the floating roof. By 4:30 p.m. a rescue team removed the victim from inside the tank. He was pronounced dead at the scene

22 One police officer and two sewer workers died in an attempt to rescue a third sewer worker, who had been overcome by sewer gas at the bottom of an underground pumping station. All four persons were pronounced dead upon removal from the station.

23 Is this a confined space? Is this a rescue or recovery? What went wrong? If they knew what they were doing, why are you here? Is entry necessary? Can the task be completed from the outside?

24 Has a confined space safe entry permit been issued by the company? Have I been trained for confined space entry & rescue? Do I have any idea what to do?

25 If entry is to be made, has the air quality in the confined space been tested for safety based on the following criteria: Flammable range less than 10% of the lower explosive limit Absence of toxic air contaminants. Oxygen supply at least 19.5%

26 Have I been trained in the selection and use of: protective clothing respiratory protection air monitoring retrieval systems lifelines ventilation systems

29 Ventilate Air Monitoring from the opening with SCBA donned Call for utilities if applicable Did I mention ventilate? Consider Decon for after removal of the victim If it is not a victim rescue or recovery, but a fire you need to still consider it a confined space. Attack the fire from a defensive posture till all the requirements of a confined space are satisfied.

Download ppt "Including Firefighters!!!! Most are due to hazardous materials inhalation or asphyxiation. Most so-called Con-Space Rescues are body recoveries. OSHA." 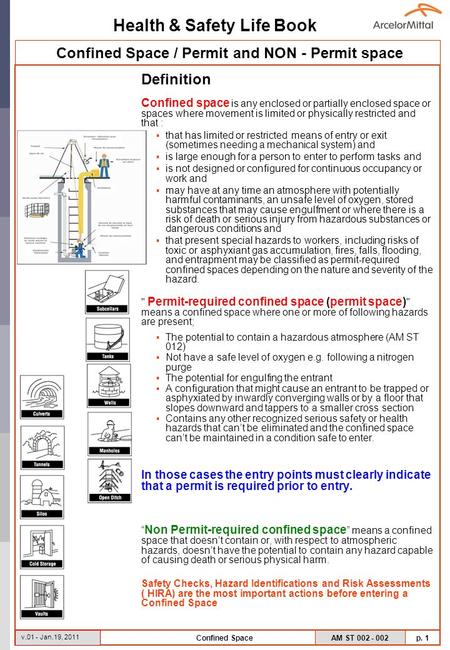 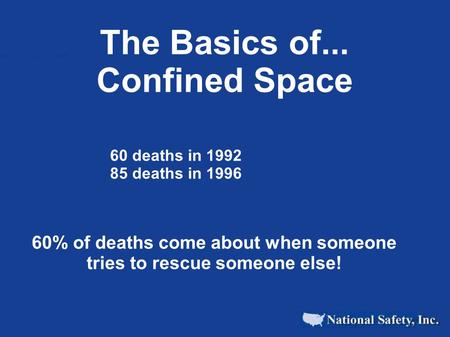 60% of deaths come about when someone tries to rescue someone else! 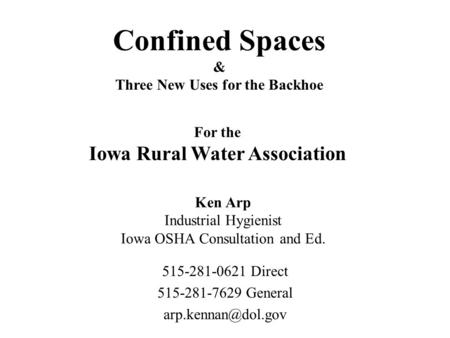 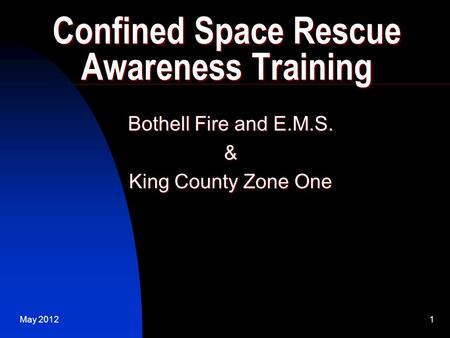 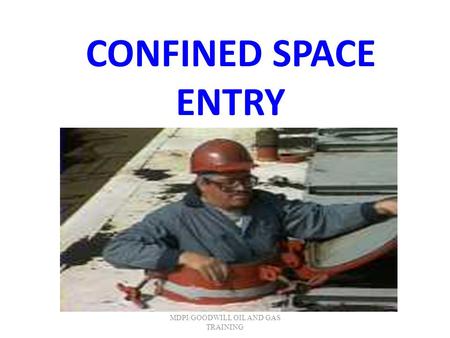 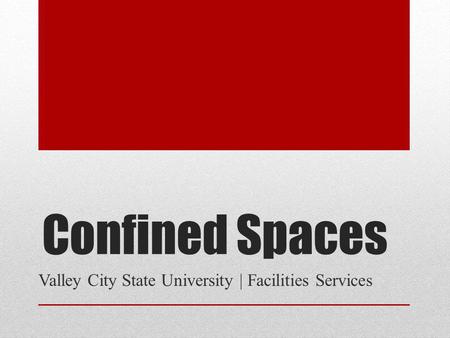 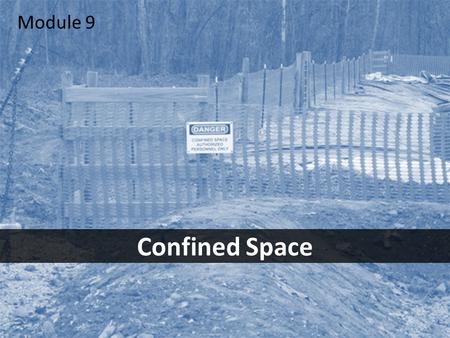 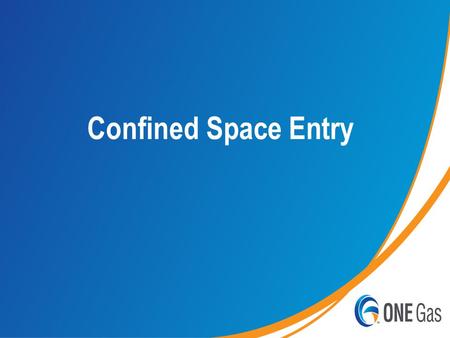 Page | 1 Confined Space Entry. Page | 2 Definition of a Confined Space Is large enough and so configured that an employee can bodily enter and perform. 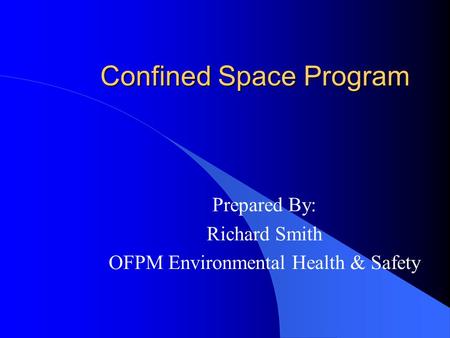 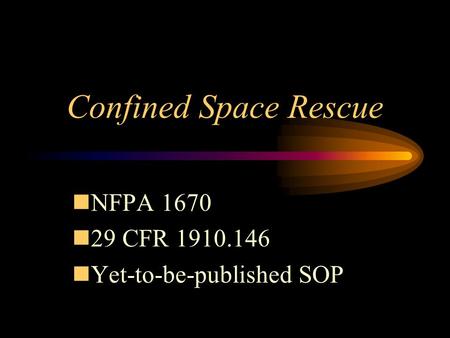 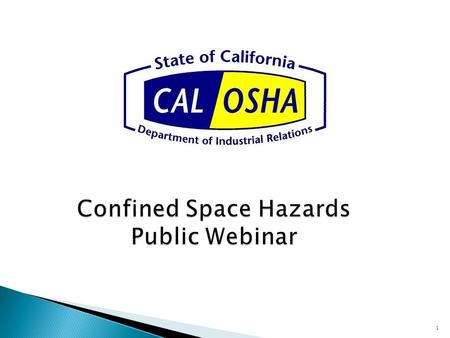 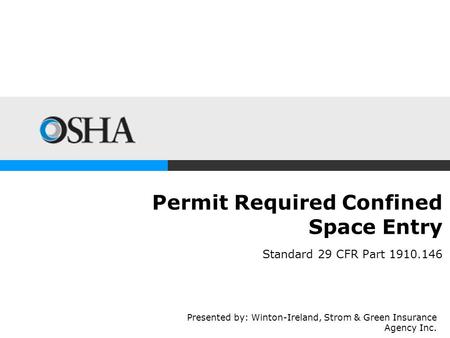 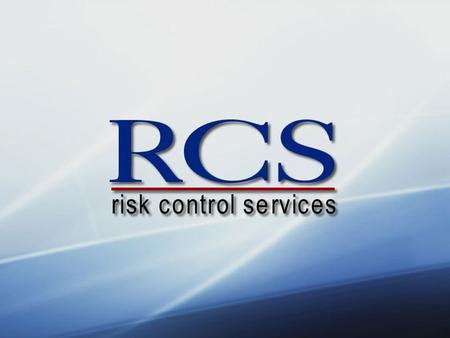 Confined Space Safety An overview of the hazards and regulatory requirements associated with confined space work. 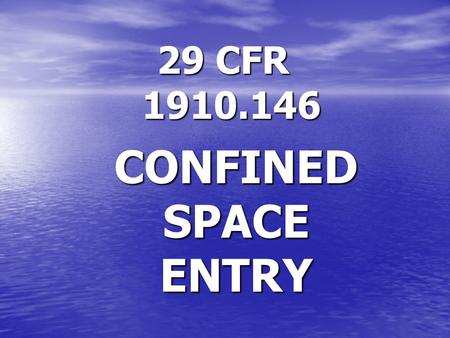 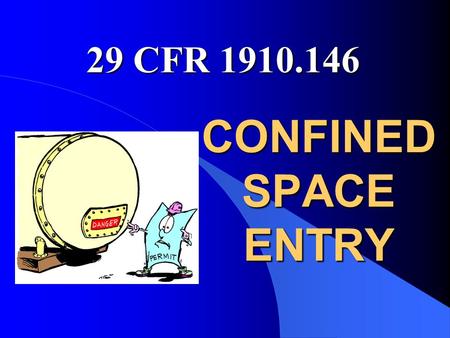 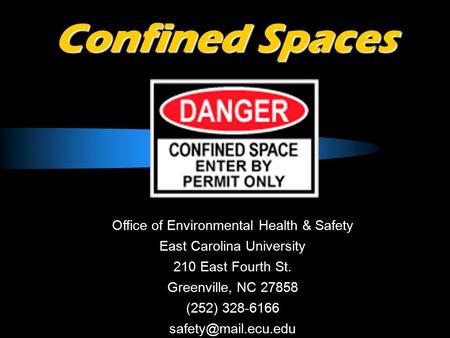 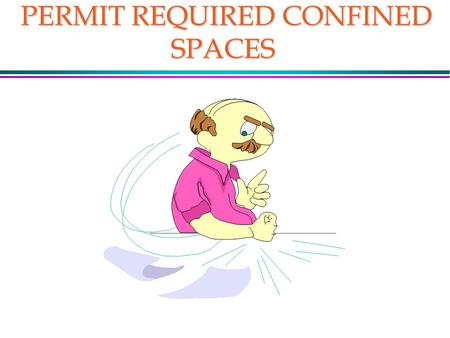 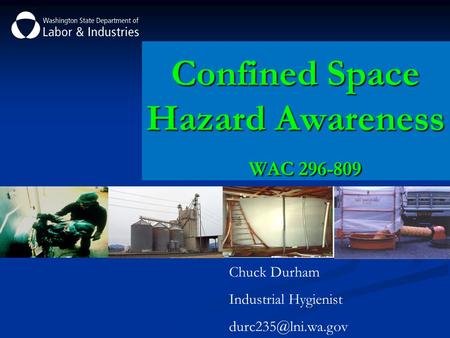 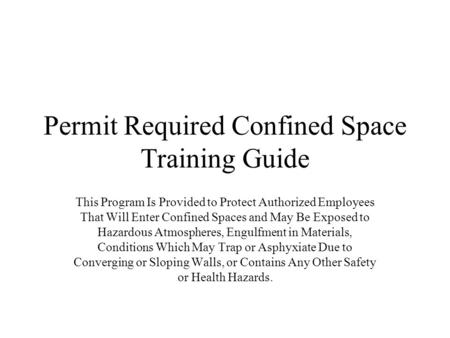 Permit Required Confined Space Training Guide This Program Is Provided to Protect Authorized Employees That Will Enter Confined Spaces and May Be Exposed. 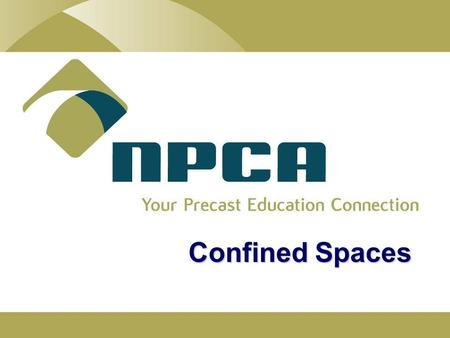