4 Chemical Energy and ATP
The three phosphate groups are the key to ATP's ability to store and release energy. ATP consists of: adenine ribose (a 5-carbon sugar) 3 phosphate groups Adenine Ribose 3 Phosphate groups ATP is used by all types of cells as their basic energy source. ATP

7 Chemical Energy and ATP
ATP energy uses: cellular activities: active transport, protein synthesis muscle contraction Most cells have only a small amount of ATP, because it is not a good way to store large amounts of energy. Cells can regenerate ATP from ADP as needed by using the energy in foods like glucose.

11 Light and Pigments photosynthesis requires chlorophyll
pigments - light-absorbing molecules that gather the sun's energy The main pigment in plants is chlorophyll. There are two main types of chlorophyll: chlorophyll a chlorophyll b

18 Inside a Chloroplast Thylakoids are arranged in stacks known as grana. A singular stack is called a granum. Stroma – space outside of the thylakoids Granum Stroma Chloroplast

19 Inside a Chloroplast Proteins in the thylakoid membrane organize chlorophyll and other pigments into clusters called photosystems, which are the light-collecting units of the chloroplast. Photosystems Chloroplast

24 Factors Affecting Photosynthesis
Many factors affect the rate of photosynthesis, including: Water Temperature Intensity of light

27 Chemical Energy and Food
One gram of the sugar glucose (C6H12O6), when burned in the presence of oxygen, releases 3811 calories of heat energy calorie - the amount of energy needed to raise the temperature of 1 gram of water 1 degree Celsius Cells gradually release the energy from glucose and other food compounds beginning with glycolysis - releases a small amount of energy.

29 Overview of Cellular Respiration
Electrons carried in NADH Electrons carried in NADH and FADH2 Pyruvic acid Glucose Glycolysis Cytoplasm Cellular respiration is the process that releases energy by breaking down food molecules in the presence of oxygen. Glycolysis takes place in the cytoplasm. The Krebs cycle and electron transport take place inside the mitochondria. Mitochondrion

32 Glycolysis the process in which one molecule of glucose is broken in half, producing two molecules of pyruvic acid, a 3-carbon compound ATP Production cell uses up 2 molecules of ATP to start the reaction When glycolysis is complete, 4 ATP molecules have been produced  a net gain of 2 ATP molecules NADH Production removes 4 high-energy electrons  electron carrier called NAD+  becomes an NADH molecule. The NADH molecule holds the electrons until they can be transferred to other molecules.

45 The Totals The complete breakdown of glucose through cellular respiration, including glycolysis, results in the production of 36 molecules of ATP. 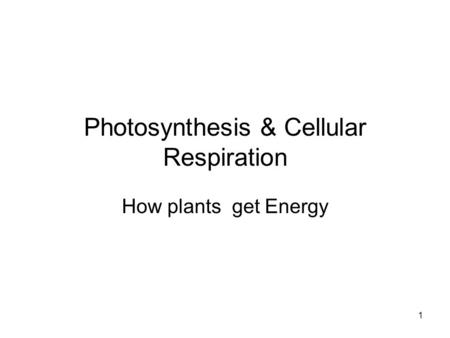 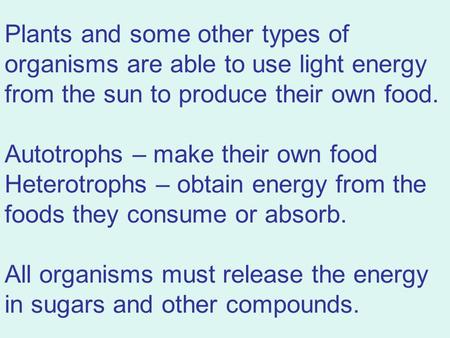 Autotrophs – make their own food 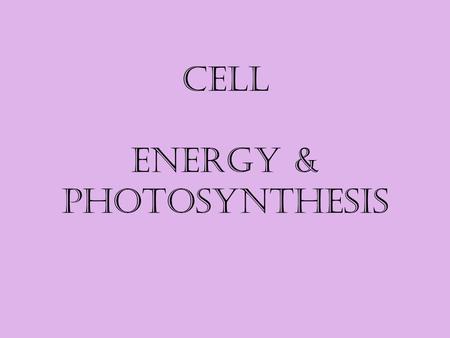 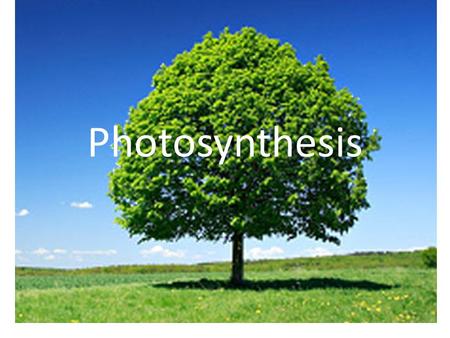 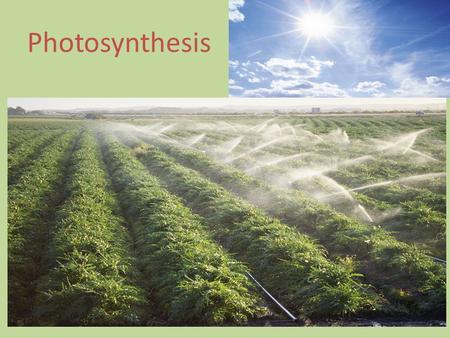 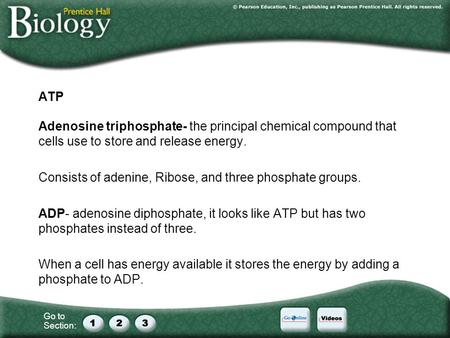 ATP Adenosine triphosphate- the principal chemical compound that cells use to store and release energy. Consists of adenine, Ribose, and three phosphate. 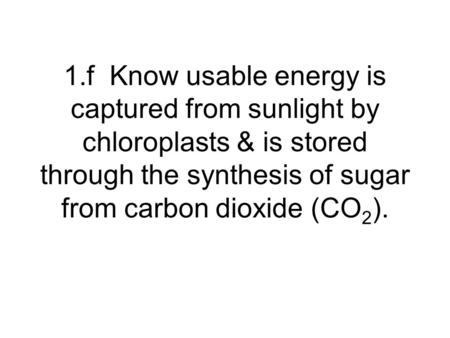 1.f Know usable energy is captured from sunlight by chloroplasts & is stored through the synthesis of sugar from carbon dioxide (CO2). 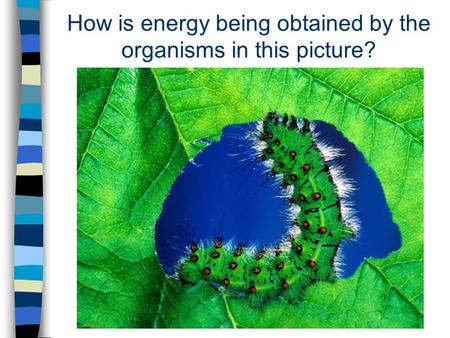 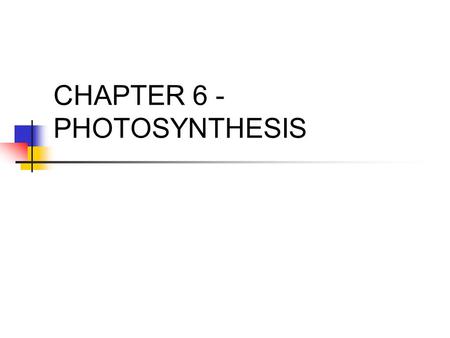 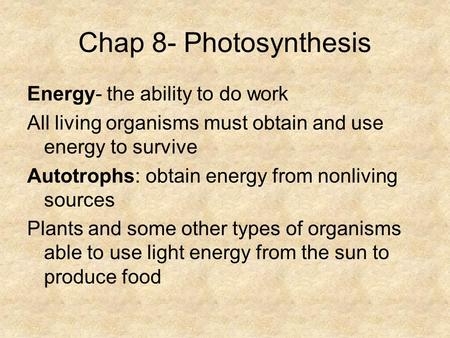 Chap 8- Photosynthesis Energy- the ability to do work 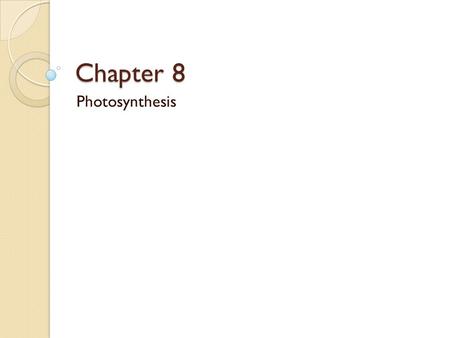 Chapter 8 Photosynthesis. Autotrophs vs. Heterotrophs Autotrophs are organisms that can make their own food ◦ Use light energy from the sun to produce. 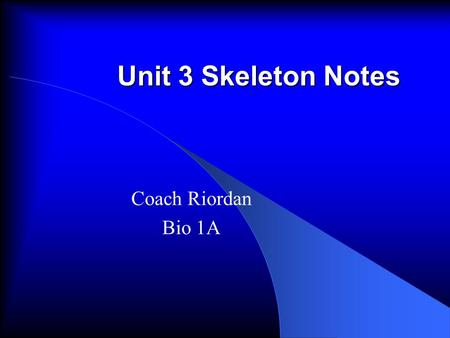 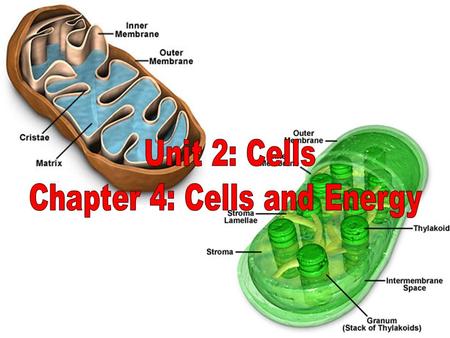 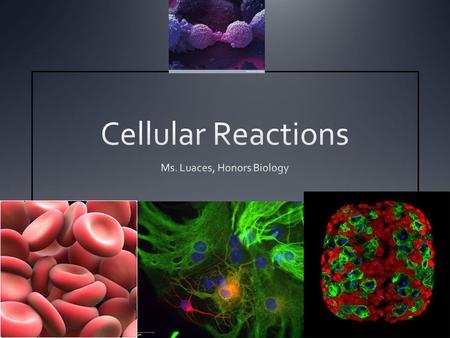 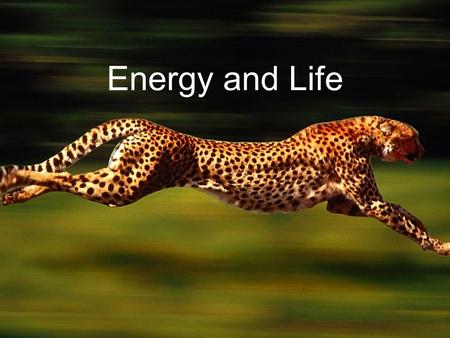 Energy and Life. Energy Energy is the ability to do work or the capacity to cause change. Autotrophs and Heterotrophs –Autotrophs – make their own food. 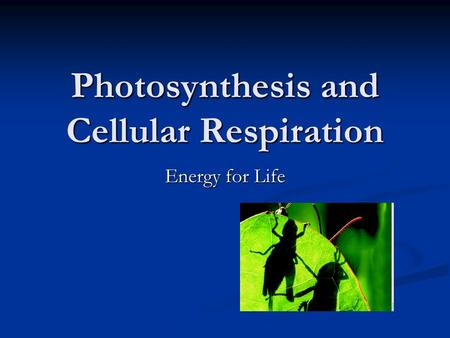 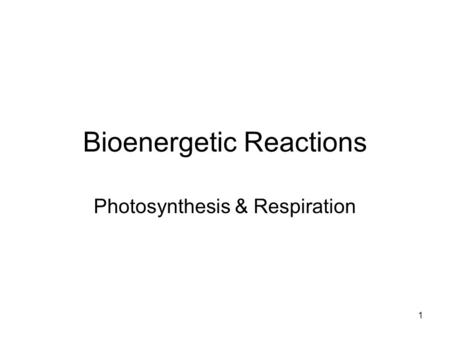