Presentation on theme: "© 2007 Pearson Prentice Hall This work is protected by United States copyright laws and is provided solely for the use of instructors in teaching their."— Presentation transcript:

1 © 2007 Pearson Prentice Hall This work is protected by United States copyright laws and is provided solely for the use of instructors in teaching their courses and assessing student learning. Dissemination or sale of any part of this work (including on the World Wide Web) will destroy the integrity of the work and is not permitted. The work and materials from it should never be made available to students except by instructors using the accompanying text in their classes. All recipients of this work are expected to abide by these restrictions and to honor the intended pedagogical purposes and the needs of other instructors who rely on these materials. Lecture Outlines Chapter 28 Physics, 3 rd Edition James S. Walker

4 28-1 Superposition and Interference If two waves occupy the same space, their amplitudes add at each point. They may interfere either constructively or destructively.

7 28-1 Superposition and Interference To summarize, the two path lengths l 1 and l 2 will interfere constructively or destructively according to the following:

8 28-2 Young’s Two-Slit Experiment In this experiment, the original light source need not be coherent; it becomes so after passing through the very narrow slits.

9 28-2 Young’s Two-Slit Experiment If light consists of particles, the final screen should show two thin stripes, one corresponding to each slit. However, if light is a wave, each slit serves as a new source of “wavelets,” as shown, and the final screen will show the effects of interference. This is called Huygens’s principle.

11 28-2 Young’s Two-Slit Experiment The dark fringes are between the bright fringes; the condition for dark fringes is:

12 28-2 Young’s Two-Slit Experiment This diagram illustrates the numbering of the fringes.

16 28-3 Interference in Reflected Waves Interference can also occur when light refracts and reflects from both surfaces of a thin film. This accounts for the colors we see in oil slicks and soap bubbles. Now, we have not only path differences and phase changes on reflection; we also must account for the change in wavelength as the light travels through the film.

17 28-3 Interference in Reflected Waves Wavelength of light in a medium of index of refraction n : Therefore, the condition for destructive interference, where t is the thickness of the film, is:

18 28-3 Interference in Reflected Waves The condition for constructive interference: The rainbow of colors we see is due to the different wavelengths of light.

19 28-3 Interference in Reflected Waves The phase changes upon reflection depend on the indices of refraction of the film and the surrounding media:

20 28-3 Interference in Reflected Waves CDs (compact disks) depend on interference for their functioning. The signal is encoded as tiny bumps in the surface, and the reflected laser beam varies in intensity depending on whether it is reflecting from a bump or not.

21 28-4 Diffraction A wave passing through a small opening will diffract, as shown. This means that, after the opening, there are waves traveling in directions other than the direction of the original wave.

23 28-4 Diffraction To investigate the diffraction of light, we consider what happens when light passes through a very narrow slit. As the figure indicates, what we see on the screen is a single-slit diffraction pattern.

24 28-4 Diffraction This pattern is due to the difference in path length from different parts of the opening. The first dark fringe occurs when:

26 28-4 Diffraction In general, then, we have for the dark fringes in a single-slit interference pattern: The positive and negative values of m account for the symmetry of the pattern around the center. Diffraction fringes can be observed by holding your finger and thumb very close together (it helps not to be too farsighted!)

27 28-5 Resolution Diffraction through a small circular aperture results in a circular pattern of fringes. This limits our ability to distinguish one object from another when they are very close. The location of the first dark fringe determines the size of the central spot:

29 28-5 Resolution On the left, there appears to be a single source; on the right, two sources can be clearly resolved.

31 28-6 Diffraction Gratings The positions of the peaks are different for different wavelengths of light. The condition for constructive interference in a diffraction grating:

32 28-6 Diffraction Gratings There are many ways to construct diffraction gratings. This acoustic-optic modulator diffracts light from acoustic wavefronts in the crystal. Turning the sound off eliminates the signal; changing the sound frequency modifies it.

33 28-6 Diffraction Gratings X-ray diffraction is used to determine crystal structure – the spacing between crystal planes is close enough to the wavelength of the X-rays to allow diffraction patterns to be seen. A grating spectroscope allows precise determination of wavelength:

34 28-6 Diffraction Gratings Diffraction can also be observed upon reflection from narrowly-spaced reflective grooves; the most familiar example is the recorded side of a CD. Some insect wings also display reflective diffraction, especially butterfly wings.

35 Summary of Chapter 28 When two waves are superposed, the result may be either constructive or destructive interference. Monochromatic light consists of a single frequency. Coherent light maintains a constant phase relationship. Young’s two-slit experiment shows light and dark interference fringes.

36 Summary of Chapter 28 Bright fringes: Dark fringes: Thin films can form colors in reflected light through the destructive interference of other colors.

37 Summary of Chapter 28 When a wave encounters an obstacle or opening, it changes direction. This is called diffraction. When monochromatic light passes through a narrow slit, a pattern of bright and dark fringes is produced. Dark fringes ( W is the width of the slit):

38 Summary of Chapter 28 Resolution is the ability to distinguish closely spaced objects. Diffraction limits resolution. Rayleigh’s criterion: if two objects are separated by less than the minimum angle, they cannot be distinguished: A diffraction grating is a large number of small slits. Principal maxima:

Download ppt "© 2007 Pearson Prentice Hall This work is protected by United States copyright laws and is provided solely for the use of instructors in teaching their." 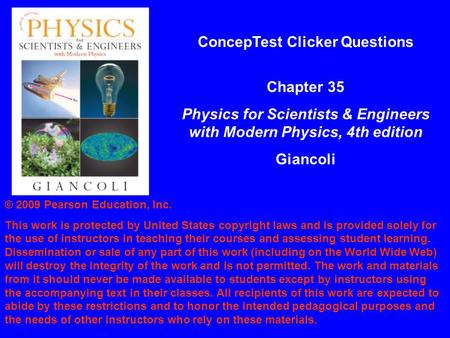 © 2009 Pearson Education, Inc. This work is protected by United States copyright laws and is provided solely for the use of instructors in teaching their. 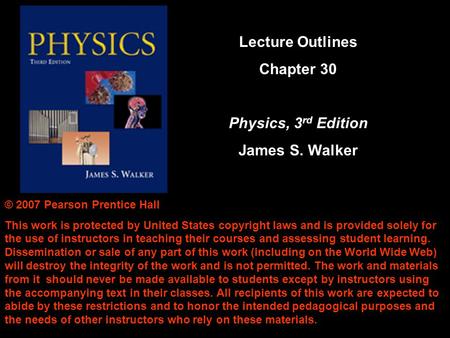 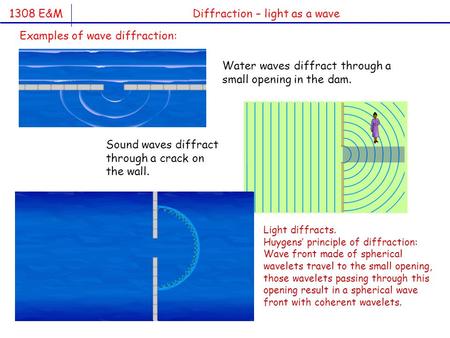 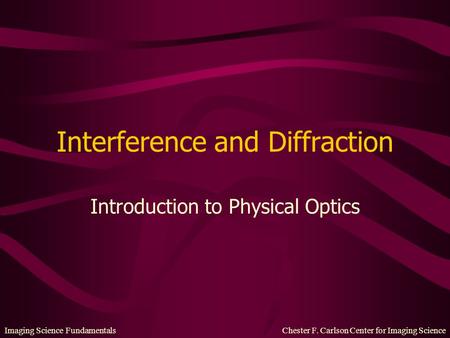 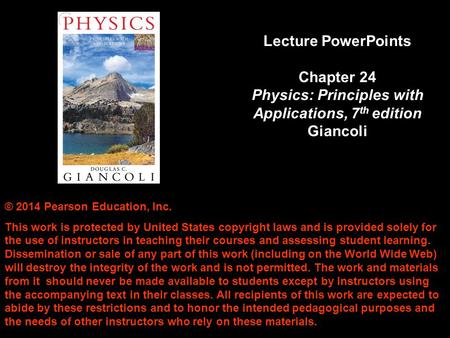 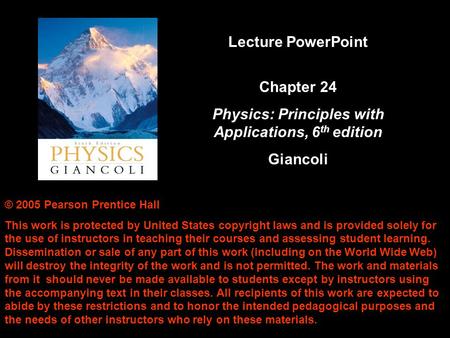 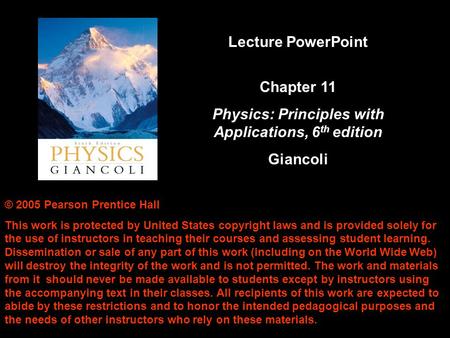 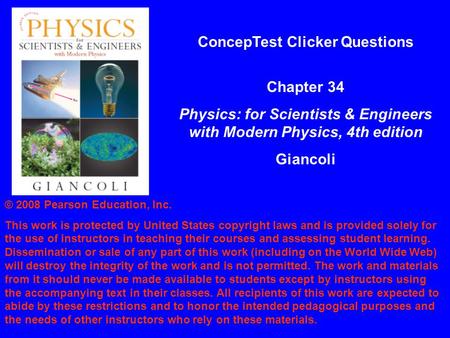 © 2008 Pearson Education, Inc. This work is protected by United States copyright laws and is provided solely for the use of instructors in teaching their. 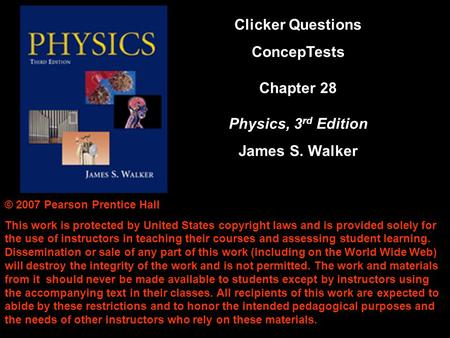 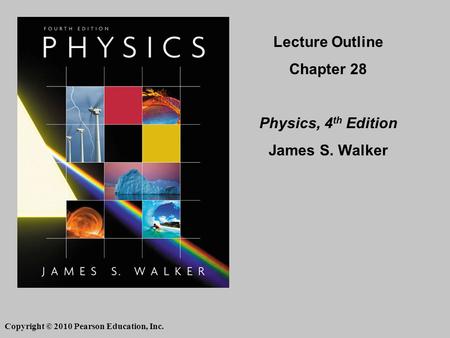