2 Sterile Because sterility cannot be assured 100% of the time…
**When in doubt, throw it out!

3 practicing sterile technique
The goal is to keep microbes to an irreducible minimum Strict adherence is necessary for the protection of the patient that is undergoing evasive surgery Several concepts and applications are key to the implementation of sterile technique Use of common sense is a must Are there gray areas?

4 practicing sterile technique
There is no compromise in sterile technique Sterility cannot be taken for granted; it must constantly be checked and maintained Surgical team members constantly monitor their own technique, as well as that of the other team members Breaks are identified and corrective actions are taken Each team member must be expecting and be able to accept critique from others

5 Keeping microbes to an irreducible minimum

6 Living tissue cannot be sterilized
The skin of the patient and surgical team members harbors microbes that cannot be removed via the skin prep, hand washing, or surgical scrub Adequate prep of some surgical sites is impossible due to the presence of a large number of microbes The wound may have already been exposed to contaminants Infection may already be present

8 Sterility is not absolute and cannot be effectively proven at all times
Chemical indicators (external and internal) only verify exposure to the sterilization process. They are not proof of sterility. All types of packaging materials for sterilization have disadvantages Human error can effect the outcome of the sterilization process Handling and storage conditions may compromise sterility Microbes that have not yet been identified may be a threat

10 SURGICAL CONSCIENCE THE SURGICAL TECHNOLOGIST MUST BE ABLE TO RECOGNIZE AND CORRECT BREAKS IN STERILE TECHNIQUE, WHETHER THEY ARE COMMITTED IN THE PRESENCE OF OTHERS OR ALONE.

14 PRINCIPLE # 1 cont. THE STERILE FIELD CONSISTS OF a separate, sterile area that in a larger sense consists of the surgical site itself, the draped portions of the patient and OR table, the sterile portions of the gowns and gloves and the draped ring stands, Mayo stand, and back table.

15 PRINCIPLE # 1 cont. AS TIME PASSES there is a likelihood that a sterile field has become contaminated by error or by airborne contaminants. Therefore, it should be created as close to the time of use as possible. After the sterile supplies have been opened, the room must be monitored.

16 PRINCIPLE # 1 cont. If a case is switched to another OR, and the sterile supplies and instruments have already been opened, the back table should NEVER be covered with a sterile drape to be moved to another room.

17 PRINCIPLE # 1 cont. CHEMICAL INDICATORS- Internal or external monitors change color when exposed to the sterilization process. If the indicator did not change to the appropriate color, the items should be considered unsterile.

18 PRINCIPLE # 1 cont. Instruments, such as knife blades, that come in contact with the skin should not be reused. The instrument should be set in a designated area to prevent further use on deeper tissue.

19 PRINCIPLE # 1 cont. Personnel should not reuse instruments used during open bowel or dirty portions of the procedure and scrubbed team members should regown and reglove before returning to use sterile instruments from the clean setup. (IF 2 SEPARTE SET UPS ARE USED)

20 PRINCIPLE # 1 cont. When removing instruments from the autoclave, the sterile team member must not touch the edge of the sterilizer with the instrument, tray, gown, or gloves. The inside of wrappers containing sterile items is considered sterile except for a 1-2” perimeter around the outside edge of the wrapper.

21 PRINCIPLE # 1 cont. The inner edge of a heat sealed peel pack is considered the line between sterile and nonsterile. The flaps should be pulled back without tears in the peel pack itself. The contents must never be allowed to slide over the edge of the peel pack.

22 PRINCIPLE # 1 cont. When opening a sterile wrapped item, the team member opens the (1ST) flap away from the body. The side flaps are opened and secured in order one at a time. The last flap is pulled toward the body. The item is then transferred onto the sterile field or is taken from the package by a sterile team member.

24 PRINCIPLE # 1 cont. Any portion of a hose or cord that is hanging off of a sterile field is considered contaminated and cannot be pulled back up onto the sterile field. Two examples are the Bovie cord and suction tubing. Once sterile drapes or towels have been placed, they cannot be repositioned. The portion of the drape that is below the table level is considered contaminated.

25 QUESTIONABLE STERILITY
WHEN IN DOUBT , THROW IT OUT.

26 INTEGRITY- COMPLETE, NO BREAKS OR TEARS
There must be no evidence of strike-through, tears, or punctures; all seals must be intact; chemical indicators must have turned color to indicate exposure to sterilization conditions.

29 PRINCIPLE # 1 cont. If a package that is wrapped in a pervious woven material drops to the floor, the package is considered contaminated. If the package is impervious and the floor is dry, the item can be transferred to the back table but should not be placed back in sterile storage.

32 PRINCIPLE # 1 cont. Unnecessary pressure should not be placed on sterile packs to prevent forcing air outward and allowing air to be pulled inward. Peel packs should be stored on their sides to prevent pressure that can rupture the package.

33 PRINCIPLE # 1 cont. Use non-penetrating instruments to hold drapes and cords in place. If towel clips used on the field puncture any draping material, the tips of the instrument must be considered contaminated and should be left in place until the end of the procedure. If a penetrating towel clip is used and is removed for any reason, the STSR should pass the instrument off without touching the contaminated tips and a drape should be used to cover the area from which it was removed.

36 PRINCIPLE # 2 cont. The surgical gown is considered sterile from the waist to the mid-chest line in front and 2 inches PROXIMAL to the elbows on the sleeves. The upper chest area of the gown is considered contaminated because it cannot be viewed directly by the wearer and because of the possibility of the chin coming into contact with this part of the gown.

37 PRINCIPLE # 2 cont. When standing at a table, the gown should be considered sterile to the top of the operating table or the top of the back table The arms should not be folded with the hands in the axillary region. This region is considered contaminated because it cannot be viewed by the wearer and because of strike-through contamination.

38 PRINCIPLE # 2 cont. Hands should never be allowed to fall below waist or table level. The team member should avoid raising the hands above the mid-chest line or over the head. The back of the gown is considered contaminated because it cannot be viewed by the wearer. When wearing a sterile gown, the back should never be turned toward a sterile field.

39 PRINCIPLE # 2 cont. The stockinette cuffs of the surgical gown are considered nonsterile and should be covered by the cuff of the glove. A sterile person should sit only when the entire procedure will be performed sitting down and the hands must not fall into the lap.

40 PRINCIPLE # 2 cont. A separate sterile surface should be used for gowning and gloving to avoid contamination of the back table. The gown and gloves may be opened on a mayo stand or small table prior to the surgical scrub. When using a platform, moving from a lower position to a higher position should be avoided as much as possible.

43 PRINCIPLE # 3 cont. STERILE INDIVIDUALS KEEP WITHIN THE STERILE FIELD
Scrubbed personnel should stay close to the sterile field throughout the procedure. Movement within the sterile field should be kept to a minimum to avoid airborne contamination.

45 PRINCIPLE # 3 cont. A nonsterile person should keep at least inches from ANY sterile item, area, or sterile field. Additionally, equipment and furniture that is not covered by sterile drapes must not be included in the sterile field and must be kept a minimum of inches away from a sterile surface or item. The STSR must be conscious of these nonsterile items and personnel and maintain the inch distance

46 PRINCIPLE # 3 cont. NONSTERILE TO NONSTERILE
Nonsterile persons should never reach over a sterile field because of contamination from skin fallout. While pouring solutions only the lip of the bottle should be over the sterile basin while maintaining inches above the basin. To accommodate this, a scrub could move containers to be filled close to the edge.

47 PRINCIPLE # 3 cont. Solutions must never be recapped or reused because recapping contaminates the solution within the bottle. When draping, a sterile person should cuff their hands in the folds of the drapes.

48 PRINCIPLE # 3 cont. When draping a nonsterile surface to create a sterile field, the nonsterile person should cuff the hands within the underside folds of the drape or table cover; the drape should be opened away from the body toward the far side of the table first, then toward them last

52 CREATING THE STERILE FIELD cont.
Check dates on packages before opening. If and item is double wrapped it will be necessary to open both wrappers at that time. If an item is only wrapped one time or wrapped more than twice, it must be considered contaminated. When adding items to the sterile field, be careful not to drop heavy items on the sterile field since they could puncture the barrier covering the unsterile surface.

53 CREATING THE STERILE FIELD cont.
Nonsterile surfaces that will have sterile drapes applied are draped first toward the sterile person to prevent contamination of the gown and to avoid reaching over the nonsterile surface

55 Breach of the Sterile Field #1
Disregard the contamination Only one application and is temporary - the patient’s life is at immediate risk Once the patient is stabilized, the contamination must be reported and appropriate corrective measures taken The surgeon may want to give systemic prophylactic antibiotics to the patient

64 SCRUBBING, GOWNING, AND GLOVING
Once the initial sterile filed has been established, the STSR: All personal needs are attended to, PPE is donned (eyewear, lead aprons, etc.) perform scrub, dry, gown, and then glove Set up case Perform the initial count Drape the prepped area Create sterile field TIME OUT! 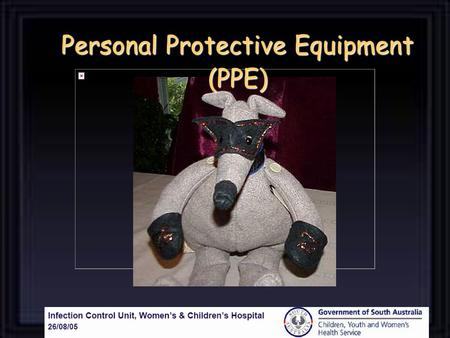 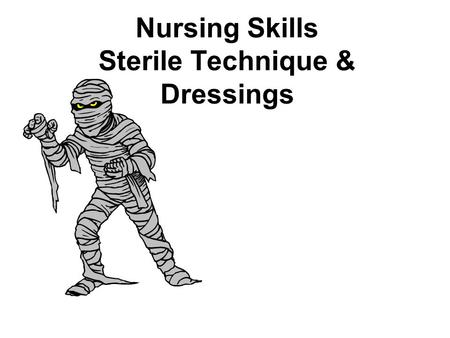 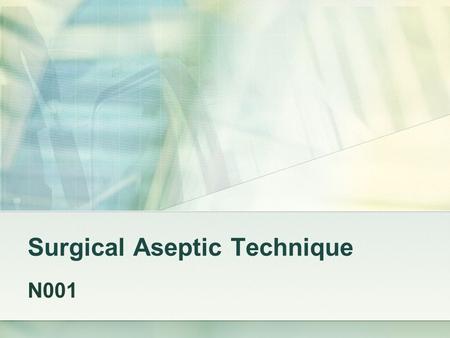 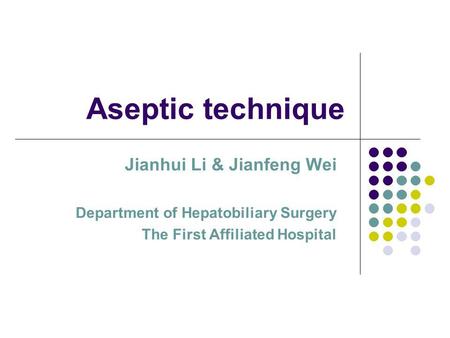 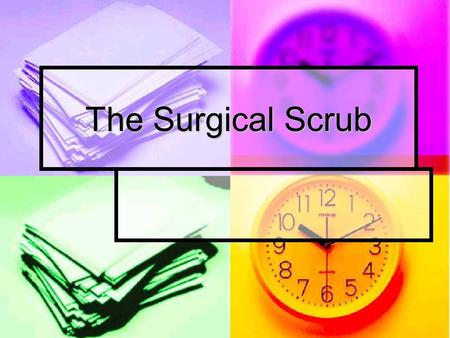 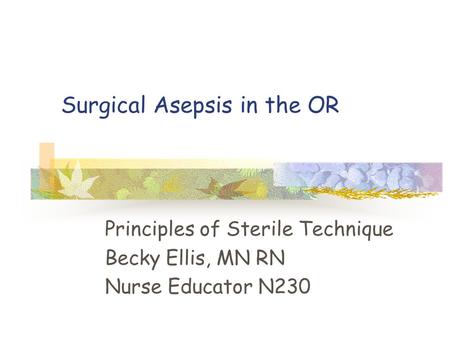 Surgical Asepsis in the OR 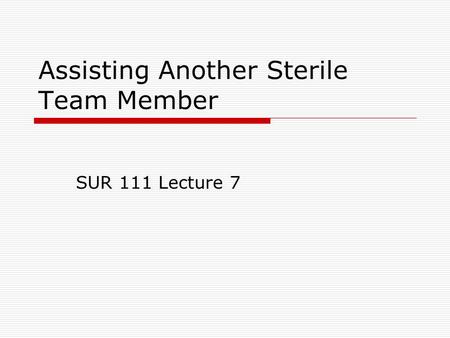 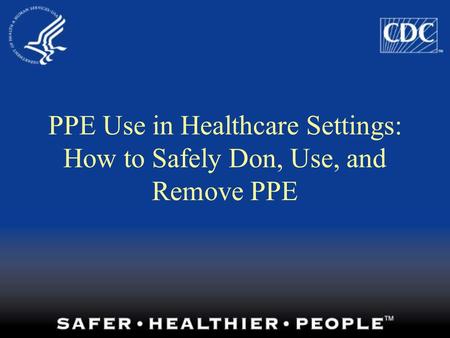 PPE Use in Healthcare Settings: How to Safely Don, Use, and Remove PPE 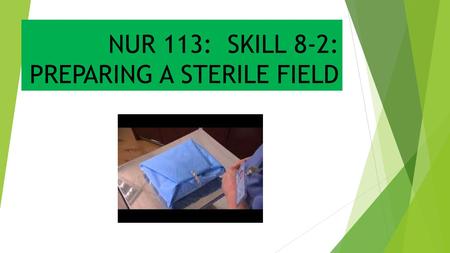 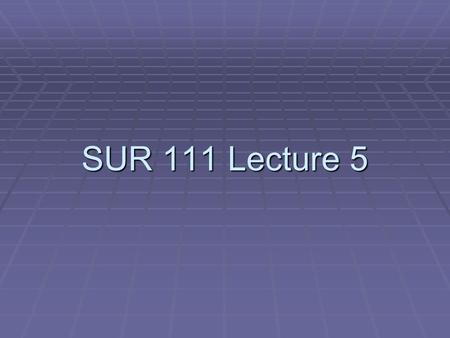 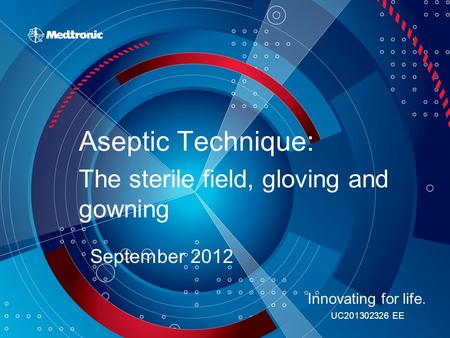 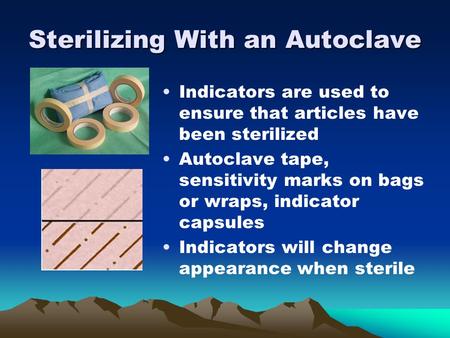 Sterilizing With an Autoclave 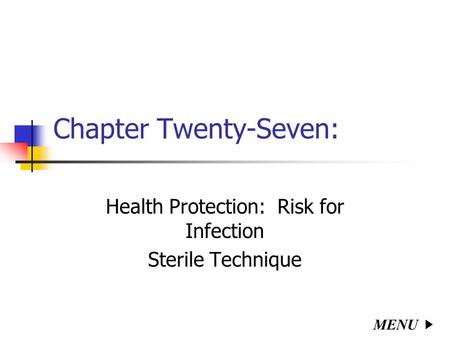 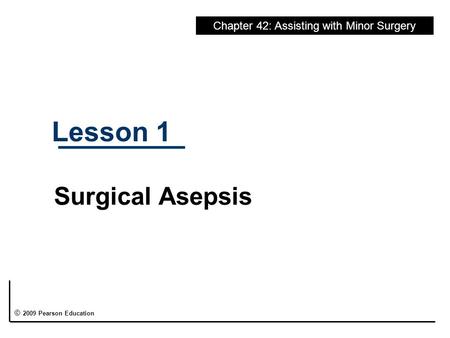 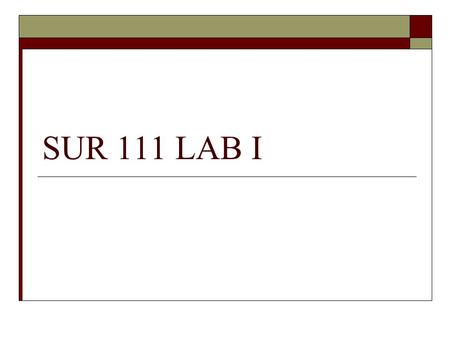 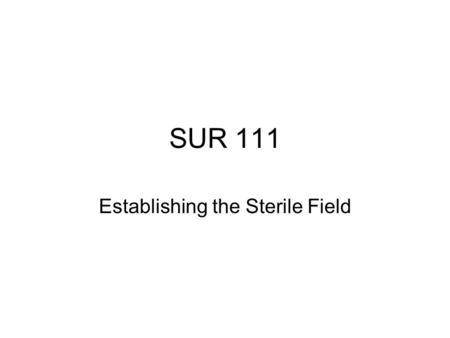 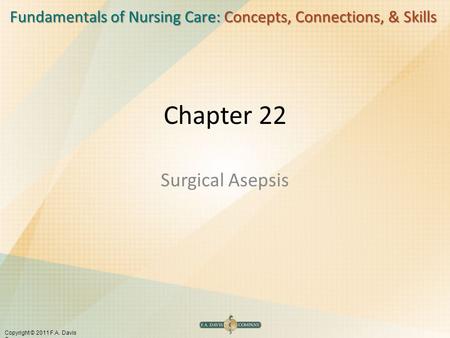 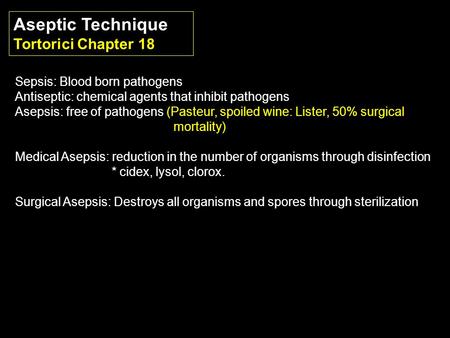 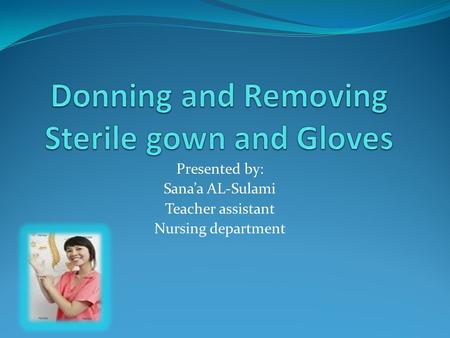 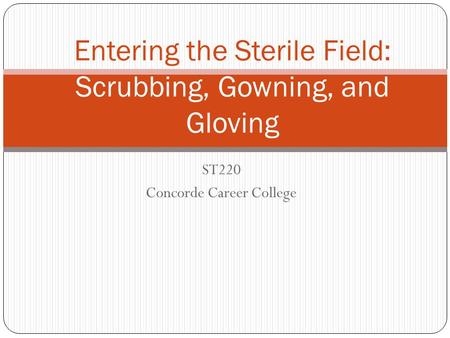