2 3.1-The First English Settlement
* Why the English settled in North America - Colonies would provide new markets for English products - Colonies had important raw materials needed for English industry - In search of wealth

3 * The First English Settlement
- First attempt: Roanoke , it was not considered the first settlement because the colony was abandon. The people vanished without a trace. -First Permanent Settlement: Jamestown -King James I granted the Virginia Company of London a Charter to establish the colony of Jamestown. - In the first year, the colony struggled because no one knew how to farm. - Year two, John Smith took over and the colony was thriving. “He who works not, eats not” -“ The Starving Time” – John Smith returned to England after an injury. While he was gone the Indians refused to help the colonists and all but 60 starved to death. -House of Burgesses: The representative government established by the Virginia company

4 * The Plymouth Colony( Present Day Massachusetts) : Founded for religious Freedom.
- After Henry VII created the Church of England ( Protestant), a group of people still wanted to practice Christianity. These people are called the Pilgrims. -Before stepping off the boat, they drew up the Mayflower Compact. -Mayflower Compact : called for just and equal laws. It marked the first time colonist claimed rights for themselves. The Pilgrims landed too late to plant crops. The Indians decided to help them by sharing their food. The Pilgrims set aside one day to thank the Indians, today this is Thanksgiving.

6 *Puritans in Massachusetts
- Another group from England who wanted religious freedom from the Church of England. - John Winthrop was their leader. He found the Massachusetts Bay Company ( Boston). - Did NOT believe in religious toleration. *Growth to the New England Colonies - Because of the religious disagreements several new colonies were formed - Roger Williams : Rhode Island ( Providence) * He believed people should pay the Native Americans for their land. * Rhode Island was tolerant of ALL religions. - Thomas Hooker : Connecticut ( Hartford) *Religious Freedom * Expanded trade because of access to water - John Wheelwright : New Hampshire

7 * Changes in the New England Colonies
- Puritans believed in town meetings. Each town had its own separate meeting (Males Only) - Grew crops - Made leather -Fishing - Shipbuilding provided many jobs -King Philip’s War : Metacom lead the Native American in attacking the colonist because they wanted to stop Puritan expansion. The Native Americans lost, the English colonist were free to expand. -IMPACT: After the war, the new generation of colonist changed their focus from religion to business

10 *Pennsylvania -Great for farming -Major Crop: Wheat -Founded by William Penn and the Quakers - Quakers believed: All people were the equal in God’s eyes. * First group of people to speak out against slavery * Women were considered equals - William Penn’s “ Holy Experiment” was to create a colony in which people of different religious backgrounds could live peacefully. -He wrote a frame of government for PA , it included an elected assembly -He required colonists to pay Native Americans for their land *Delaware -Once a part of Pennsylvania - Because Delaware colonists didn’t want to send delegates to town meetings in Philadelphia because it was too far, Delaware became a separate colony.

11 *Growth and Change in the Middle Colonies
-Many colonists were farmers -Manufacturing began because of mass amounts of crops -Manufactured cooper which was used as barrels to store food -The Backcounry: The frontier Land was located in the western part of Pennsylvania and extended to Georgia. * Many settlers of this area weren’t English and fought with Native Americans.

13 * Virginia - As Virginia thrived the white population grew and Native American population decreased -Fought over land - Native Americans could move in land to avoid British rules -Bacon’s Rebellion: As the English colonist move in land more fighting occurred. *Government did nothing, so Nathaniel Bacon led a rebellion in the frontier killing many Native Americans and even attacked Jamestown. *Maryland - Founded for Catholics seeking religious freedom - Lord Baltimore passed the Act of Toleration: It protected all Christians and gave men the right to vote.

15 * Growth and Change ( Two Different regions)
- Tidewater Region * Along the coast * Plantations : Large Farms * Economic Domination * Production of Rice led to slavery. The enslaved population out numbered the free population. -The Backcountry Region *Cut off from the coast *Families lived on small isolated farms *No slaves *Thought the government only cared about the Tidewater ( coast) because of money. 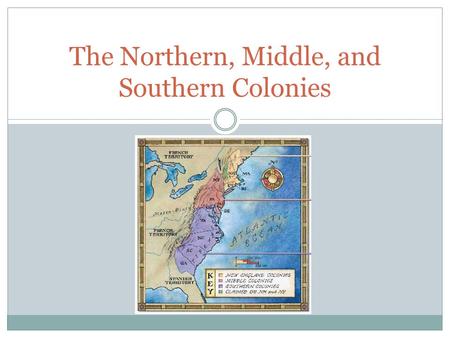 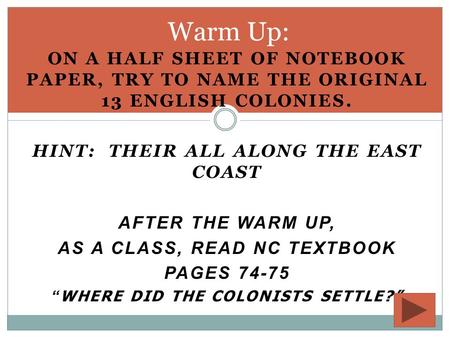 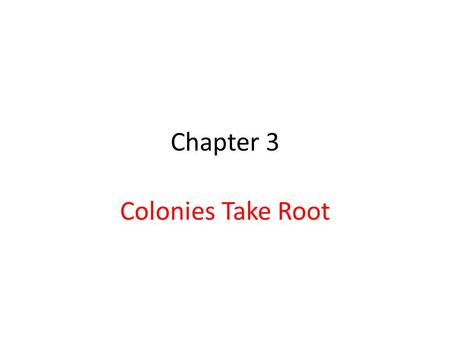 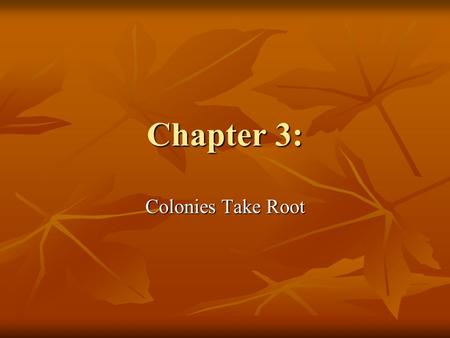