Presentation on theme: "Which event caused the South to secede? Lincoln (a republican) was elected."— Presentation transcript:

3 Which event caused the South to secede? Lincoln (a republican) was elected.

4 What did the seceding states call themselves? Confederate States of America

5 Who was their president?

6 Where did the Civil War begin? Fort Sumter, SC

7 What were the goals of the North at the start of the Civil War? The North wanted to preserve the Union. Keep the border states from seceding.

8 What were the border states? The states between the North & the South (slavery was legal). Did not secede. Delaware, Maryland, Kentucky, Missouri

9 What were the goals of the South at the start of the Civil War? The South wanted to be independent.

10 What did the disaster at Bull Run show the Union leaders? Untrained troops could not be depended upon.

11 Was the Anaconda Plan for the North or the South?

12 What were the major goals of the Anaconda Plan? Blockade Take control of the Mississippi Capture Richmond Divide the eastern part of the Confederacy

13 The Union forces tried to divide the Confederacy by gaining control of what river?

14 The fugitive slave law was a disaster for what group of people? Slaves Why? Any slave that escaped to the North was to be returned to their owner.

15 General McClellan (north) was criticized for what reason? For having the “slows” (overly cautious & non-aggressive)

17 Who won the battle of Antietam? Neither side. The North claimed it as a victory.

18 What did Lincoln do right after the battle of Antietam? Emancipation Proclamation

19 What was the document Lincoln issued declaring freedom for slaves in the Confederacy? Emancipation Proclamation

20 Who did Lincoln give command of the Union army to in June of 1863? General George G. Meade

21 General Robert E. Lee was commander for which army?

22 Why did Lee move his troops north in 1863? Supplies Give the South a rest Good battleground Washington DC and other major Northern cities A victory on Northern soil To force a peace treaty Get help from foreign countries

23 Where was the turning point of the Civil War?

27 What was the failed attack on the 3rd day of Gettysburg?

36 Who were Louisa May Alcott, Dorothea Dix & Clara Barton? Nurses during the Civil War.

37 What were the Monitor and the Virginia? Ironclads Fought the first battle between the ironclads.

38 What was the Union army called?

39 What are other names for the Union during the Civil War? North Yankees Army of the Potomac Federals United States of America

40 What are other names for the Confederates during the Civil War? South Confederate States of America Rebels Army of Northern Virginia

41 What happened on April 9, 1865 and where? Lee surrendered his army to Grant at Appomattox Court House, Virginia

Download ppt "Which event caused the South to secede? Lincoln (a republican) was elected." 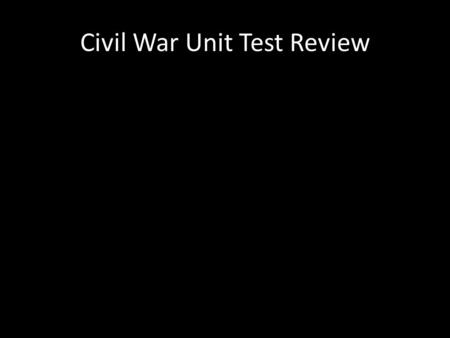 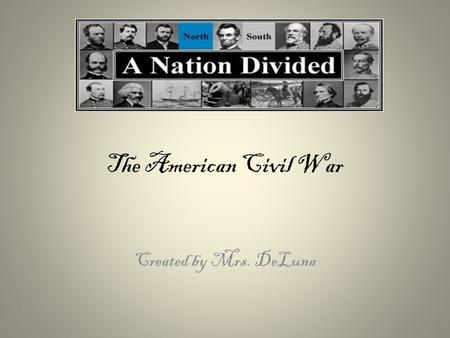