2 Pride and Prejudice Pride and Prejudice was written between October 1796 and August 1797; it was Austen’s first novel and most famous work. It was not published, however, until 1813, two years after Sense and Sensibility. Austen other novels are Northanger Abbey, Mansfield Park, Emma, and Persuasion.

3 England Austen’s major novels, including Pride and Prejudice, were all composed within a short 20 year period. Those 20 years also mark a period in history when England was at the height of its power and were still enjoying great military victories over Napoleon and the French.

4 Social Class England was extremely stratified, and class divisions were rooted in family connections and wealth. Social mobility was limited (yet becoming increasingly doable for a middle-class citizen) and class-consciousness was strong

5 Social Class Social class and its implications are overwhelmingly present in Pride and Prejudice. In her work, Austen clearly intends to undermine all of the class distinctions. But while her social attitudes may be progressive, they are not revolutionary.

6 Gender Ideas of socially appropriate behavior for men and women were very clear. Social advancement for young men was found in the military, church, or law Women could only accomplish this through marriage

7 Gender Following the example of their leader George IV, a man known for his lack of morals, young men regularly went to universities not to learn but to see and be seen, to drink, gamble, race horses and spend money. Women were generally uneducated, leaving them little choice but to find a husband for their own social and economic survival.

8 Pride and Prejudice “It is truth acknowledged, that a single man in possession of a good fortune, must be in want of a wife.”

9 Women in the 19th Century Marriage was a central concern in the early nineteenth century because it involved the social continuance of the family line through inherited property and was the only chance for middle and upper-class women to have a tolerable existence. Law, education, and custom closed off many possible avenues of advancement for women Men ruled the public world of politics and business; women ruled the home.

11 Women in the 19th Century Married women could not own property, including that which they might have inherited or earned after the wedding. Husbands were under no obligation to will their estates to their wives If a husband died without a will, his widow had little claim to any of the property

12 Women in the 19th Century Unmarried women of good birth had an even more difficult time They could only rarely inherit property Most fortunes were willed to eldest son As in the case with the Bennet family, great estates were frequently “entailed” on the male line, so that in the absence of sons, some distant relative would inherit a man’s property

13 Women in the 19th Century No matter how elevated her background, a penniless young woman who did not marry was often forced to live with married sisters or live on a meager income. Treated as a servant Only careers as governesses or school teachers Required to care for infants or do the sewing These girls in the highest ranks were forced to earn their living

14 Women’s Accomplishments
In Austen’s day, the daughters of middle and upper class could be sent to school, but their education consisted more of becoming “accomplished” than it did of expanding their academic knowledge. It was meant to attract a man. These skills tended to be neglected after marriage. Reading Playing a musical instrument Singing Drawing Speak modern languages (generally Italian or French)

15 Entailments An entail was a legal device to prevent landing property from being broken up or from descending into the female line Leaving the bulk of one’s wealth Darcy received 10,000 a year (representing a wealth of 200,000 while his sister has 30,000) Bingley has 100,000 and his two sisters 20,000 a piece)

16 And the story goes… Mrs. Bennet’s overriding concern with the marriages of her five daughters is thus typical of the panic many 19th century mothers felt (shocking). Mr. Bennet had entailed his estate to his distant cousin A single man, Charles Bingley, has leased Netherfield Park and his best friend is Fitzwilliam Darcy Possibility for the middle class Bennet girls to catch a man Jane Elizabeth Mary Catherine (Kitty) Lydia

17 Setting The story takes place in a series of small villages in England at the close of the 18th century The novel opens in the Bennet home in the village of Longbourn, located about a mile from Meryton, the nearest town Chapter 3 takes place at Netherfield Park, Bingley’s rented estate The setting alternates between Longbourn and Netherfield Park with occasional mention of other various locations

19 Some Literary Techniques
Satire: writing that ridicules or holds up to contempt the faults of individuals or groups. Irony:technique that involves surprising, interesting, or amusing contradictions Humor: writing that amuses and entertains (Austen uses satire and irony)

20 Form and Structure Satire on life in a small village in southern England at the close of the 18th century. Novel of manners: “business of getting married” Action takes place within 14 months (from early autumn to right before Christmas) Sixty-one chapters divided into three volumes Most of the novel is told in third-person point of view, but switches to first person for sense of closure

21 Essential Question How do social norms impact and influence people in their perceptions and their relationships? 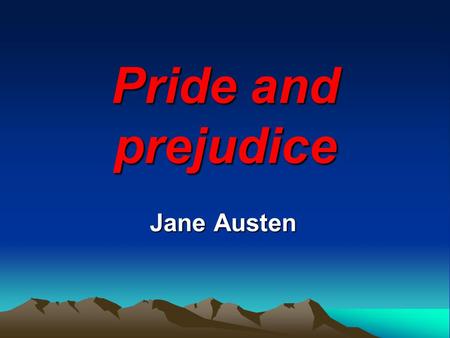 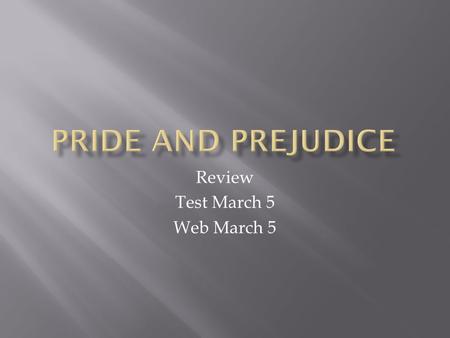 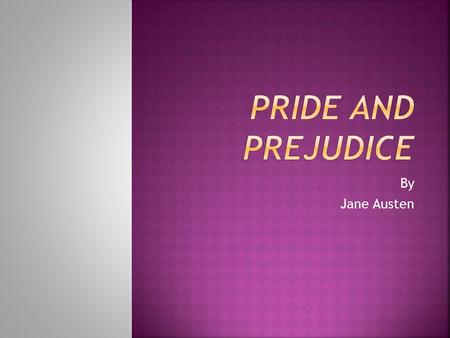