2 Trade protection is the deliberate attempt to limit imports or promote exports by putting up barriers to trade. Despite the arguments in favour of free trade and increasing trade openness, protectionism is still widely practiced.

6 Protect non-renewable resources
Non-renewable resources, including oil, are regarded as a special case where the normal rules of free trade are often abandoned. For countries aiming to rely on oil exports lasting into the long term, such as the oil-rich Middle Eastern economies, limiting output in the short term through production quotas is one method employed to conserve resources.

8 Save jobs Protecting an industry may, in the short run, protect jobs, though in the long run it is unlikely that jobs can be protected indefinitely.

9 Help the environment Some countries may protect themselves from trade to help limit damage to their environment , such as that arising from CO 2 emissions caused by increased production and transportation

10 Limit over-specialisation
Many economists point to the dangers of over-specialisation, which might occur as a result of taking the theory of comparative advantage to its extreme. Retaining some self-sufficiency is seen as a sensible economic strategy given the risks of global downturns, and an over-reliance on international trade. In addition to the economic arguments for protection, some protection may be for political reasons.

11 Methods of Protectionism
There are two types of protection; tariffs, which are taxes, or duties, on imported goods designed to raise the price to the level of, or above the existing domestic price, and non-tariff barriers, which include all other barriers, such as:

12 A quota is a limit to the quantity coming into a country.

13 With no trade, equilibrium market price in the country will exist at the price which equates domestic demand and domestic supply, at P, and with output at Q. However, the world price is likely to be lower, at P1, than the price in a country that does not trade. If the country is opened up to free trade from the rest of the world, the world supply curve will be perfectly elastic at the world price, P1. The new equilibrium price is P1 and output is Q1. The domestic share of output is now Q2,compared with Q, the self-sufficient quantity. The amount imported is the distance Q2 to Q1.

14 In an attempt to protect domestic producers, a quota of Q2 to Q3 may be imposed on imports.
This enables the domestic share of output to rise to 0 to Q2, plus Q3 to Q4.

16 The quota creates a relative shortage and drives the price up to P2, with total output falling to Q4. The amount imported falls to the quota level. It is this price rise that provides an incentive for less efficient domestic firms to increase their output. One of the key differences between a tariff and a quota is that the welfare loss associated with a quota may be greater because there is no tax revenue earned by a government. Because of this, quotas are less frequently used than tariffs.

17 Government favouring domestic firms Countries can protect their domestic industries by employing public procurement policies, where national governments favour local firms. For example, national or local governments may purchase supplies of military or medical equipment from local firms. Domestic subsidies Governments may also give subsidies to domestic firms, which can then be used to help reduce price and deter imports. This financial support can also be in the form of an export subsidy, providing an incentive for firms to export.

18 Health and safety grounds: National governments can also use health and safety regulations to discriminate against imported products, such as banning the import of a product on health or safety grounds, while local producers do not have to pass such stringent tests. Quality standards: In a similar way, governments can set tough quality standards that may be difficult for overseas producers to meet.

19 Bureaucracy Excessive bureaucracy associated with the process of importing and exporting may also restrict trade. For example, goods may be deliberately held-up at ports and airports, and there may be unnecessarily complex and lengthy paperwork associated with international transactions. Exchange rates Monetary protection involves countries deliberately devaluing their exchange rate to stimulate exports and deter imports.

20 The impact of tariffs The imposition of tariffs leads to the following: Higher prices Domestic consumers face higher prices, which also means that there is a loss of consumer surplus. However, there is a gain in domestic producer surplus as producers are protected from cheap imports, and receive a higher price than they would have without the tariff. However, it is likely that there is an overall net welfare loss. Without trade, the domestic price and quantity are P & Q. If a country opens up to world supply, price falls to P1, and output increases from Q to Q2. As a result, domestic producers’ share falls to Q1 and imports now dominate, with the quantity imported Q1 to Q2. 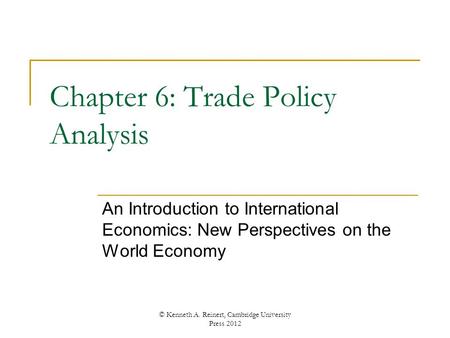 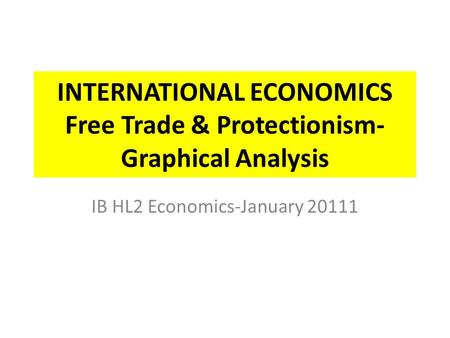 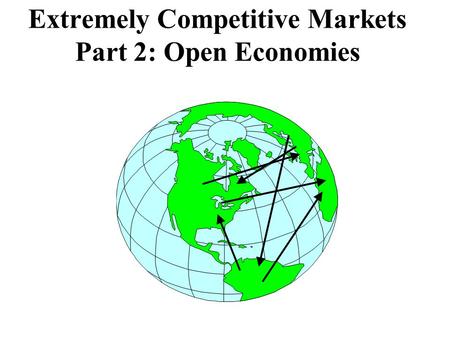 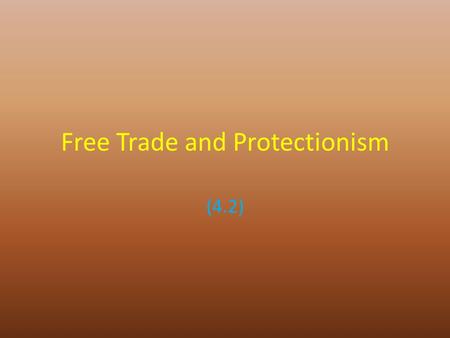 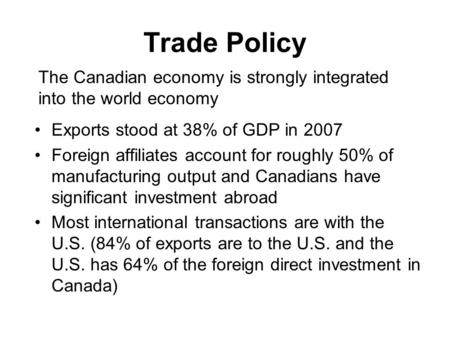 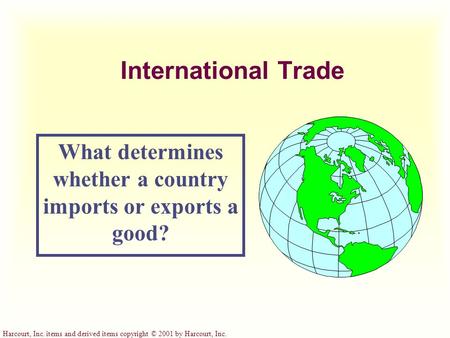