2 FDI in the current market
GIPB Results Implications for IPIs

4 Investment flows – Global
Global FDI in 2009 at $1.11 trillion (Greenfield and M&A) 2nd consecutive year of decline after 4 years of growth Still 5th highest year in history Share of developing countries rose to 43%, the highest since 1982 NOTE TO THE INSTRUCTOR: The following slides need to be updated from latest UNCTAD’s World Investment Report. Source: World Investment Report 2010, United Nations Conference on Trade and Development

5 Investment flows – Developing economies
$630 billion in 2008 was the highest level ever, while developed economies saw a decline of 16%1 $478 billion in 2009 was a 24% decrease, but was much more modest than the 44% decrease in developed countries East Asia $154.8 billion in 2009 was the second highest ever, but a decline of 17% from the 2008 peak of $185.5 billion The Pacific 2 $892 million in 2009 was the highest ever, up nearly 15-fold since 2002 While inflows into developing economies and less developed countries reached records during 2007, there has been a relative decline since 2004. 1China and Russia represent 1/3 of the $630 billion 2 Includes Cook Islands, Fiji, Kiribati, Marshall Islands, Micronesia, Nauru, Niue, Palau, Papua New Guinea, Samoa, Solomon Islands, Timor-Leste, Tokelau, Tonga, Tuvalu and Vanuatu Source: UNCTAD World Investment Report 2010 Source: WIR2008

6 Investment flows (by value) – The Pacific
Since 2002 FDI inflows have trended upward with periodic setbacks Largely to Papua New Guinea (44% of 2009 total), Fiji (27%) and, over the last 5 years, increasingly the Solomon Islands (19%) FDI Inflows to the Pacific, Millions of USD Source: UNCTAD FDI Database

9 Prospects for FDI Recovery: 2009-2012
Depends on financial sector liquidity and willingness to fund new projects Depends on government response policies – e.g. extent of protectionism As of mid-October, FDI flows appear to be on the “pessimistic” track, with a forecast increase of half a percent. Global FDI flows, , and projections for Source: World Investment Report 2010, UNCTAD

10 How can governments react quickly and effectively?
Longer term: Better infrastructure and skills Expensive investments Market size/growth and factor costs are functions of the market - difficult to influence. Proximity to markets, climate, resource endowments, and other natural characteristics are what they are.

11 How can governments react quickly and effectively?
Short term: A better investment climate: Can be achieved with greater simplicity, transparency, and predictability Comes in great part from better organization, streamlining, coordination, and communication with the private sector Reduces costs and risk to investors, instantly improving the expected return on investment for your location Good facilitation - compensates (at least to an extent) for weaknesses in the investment climate, giving investors clarity and security where there is none, through the provision of information and assistance.

13 FDI in the Current market
GIPB Results Implications for IPIs

14 GIPB Mirrors Companies’ Site Selection Process
Stepping in the shoes of two companies (manufacturing and software) a site location consultant assessed: IPI Websites-- The extent to which IPIs offer country and sector information suitable to assist potential investors in their location search. Inquiry handling -- A mystery shopper approach tested each IPI’s ability to interact with and manage two distinct investment inquiries, provide relevant information and make a business case for investment. A recent survey of 3,600 US large companies ($25m+) conducted by DCI Consulting reveals that: 64% of respondents would use the IPI website in their next location search. Only 8% of respondents say they would not contact the IPI during the investment decision process Site location consultants are more likely to use the IPI services for information in the screening process.

16 Regional Comparison 2006 and 2008
Trends IPIs have improved since 2006 but this is down to the ‘shop window’- the websites. There is no real change in the investor assistance on the’ shop floor’- improvements in inquiry handling have been moderate at best and in most cases the levels of service remain very low. Improvements are recorded for most regions. However, in the Pacific it seems that investors can expect less help from the IPIs to navigate the system. Regional Comparison and 2008 Fiji Kiribati Palau Papua New Guinea Solomon Islands The Pacific1 1Note: due to limited data availability average based on 5 of the invited countries

19 Top Performers in the Pacific
Average Good Approaching global competitiveness Fiji rated “good” Consistency is a weakness. If both inquiry responses had been stronger, a few other weaker performers would have attained “average”

20 The Pacific: Details Website Inquiry Handling Of 11 IPIs surveyed:
As a group, the Pacific was “best practice” in terms of Design (82%) and “good” in terms of Information Architecture (74%) Content was weakest with an average of 40% 1 countries scored within the very weak range as a result of no website 8 of the 11 countries achieved “good or average”. Top 3: Fiji Vanuatu Papua New Guinea Inquiry Handling Of 11 IPIs surveyed: 9 IPIs did not respond to investors’ manufacturing inquiry 8 did not respond to the software inquiry 2 IPIs responded to only 1 inquiry type 7 IPIs (more than half) failed to respond in both cases Fiji had the highest average response at 47%; responding to both inquiry types

21 FDI in the Current Market
GIPB Results Implications for IPIs

22 Get the Basics Right …… Facilitation, Facilitation, Facilitation
IPIs underestimate what’s needed Without proper Facilitation no investment promotion effort will pay off The smaller the IPI budget the more sense Facilitation makes Focus on the basics: Walk before you run Countries where doing business is more challenging Bigger role for the IPI to inform and facilitate foreign investors Lesser known countries Bridge the information gap through the work of the IPI to attract investment The Web allows all IPIs to promote cost-effectively …... but there must also be a capacity to directly interact with investors 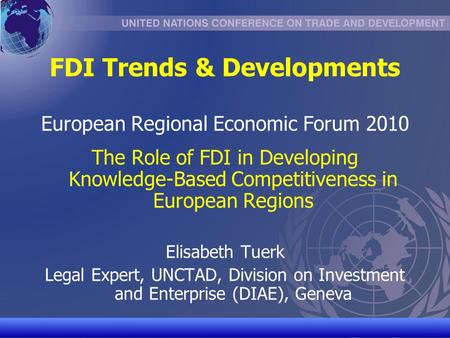 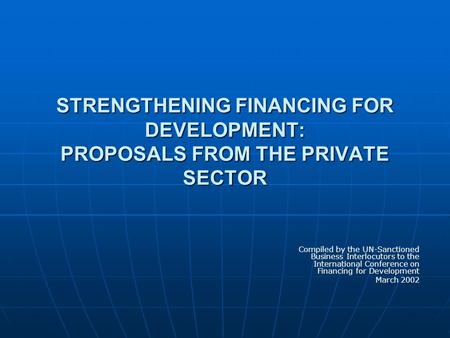 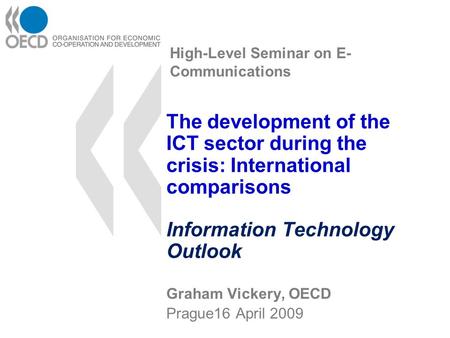 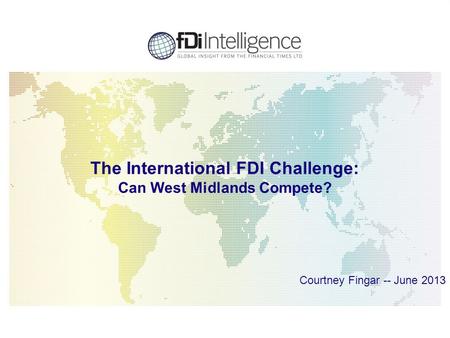 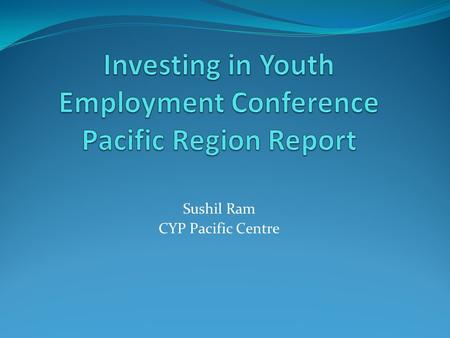 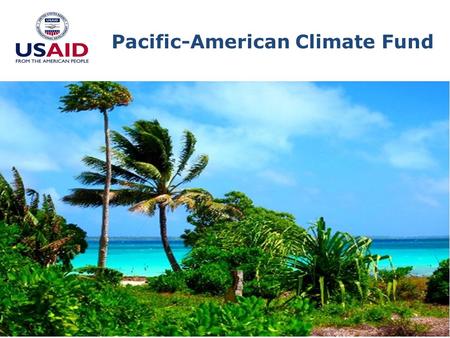 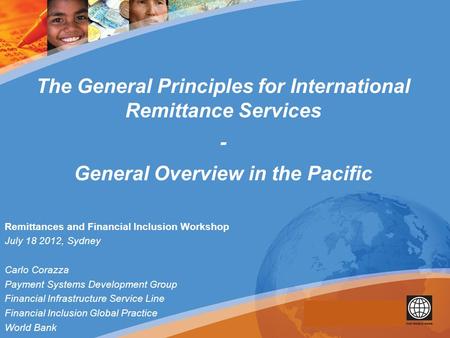 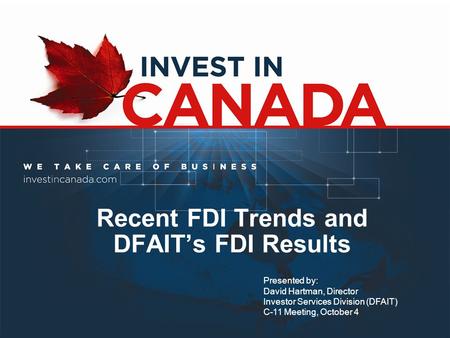 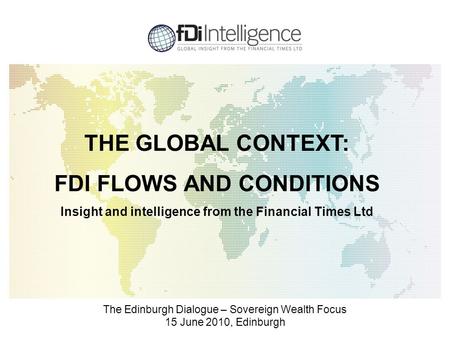 The Edinburgh Dialogue – Sovereign Wealth Focus 15 June 2010, Edinburgh THE GLOBAL CONTEXT: FDI FLOWS AND CONDITIONS Insight and intelligence from the. 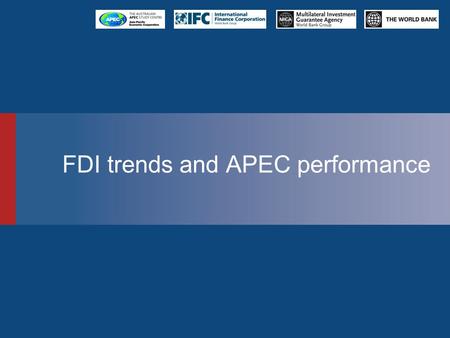 FDI trends and APEC performance. 2 FDI in the current market GIPB Results Implications for IPIs Learning Objectives of the Course. 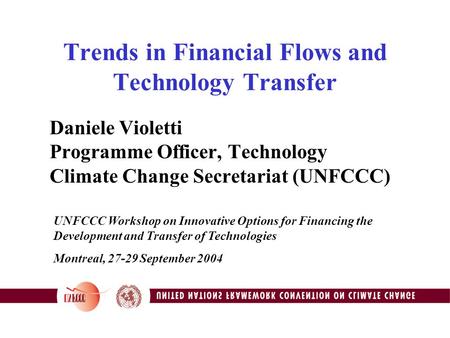 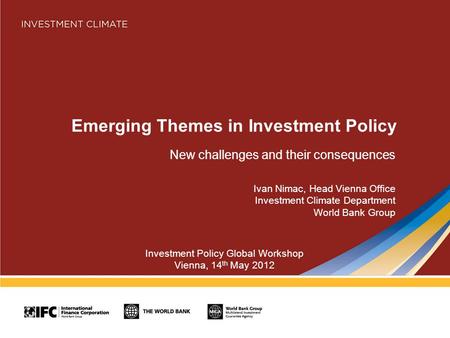 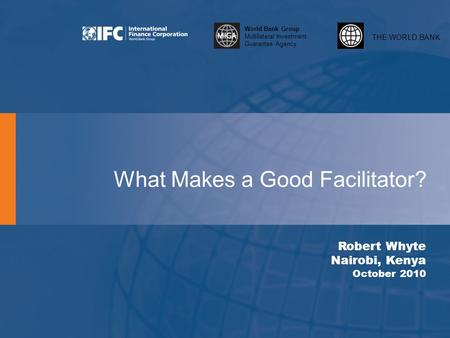 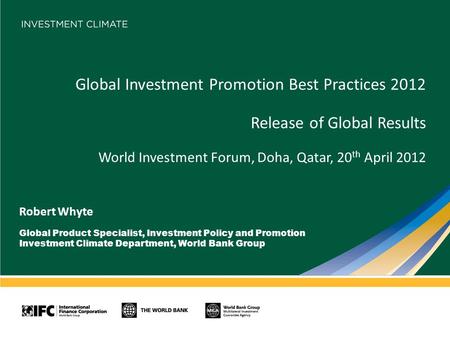