The Baroque Period 1600 - 1750. The “Age of Absolutism” Many rulers exercised absolute power over all their subjects Kings would show their power by trying.

Presentation on theme: "The Baroque Period 1600 - 1750. The “Age of Absolutism” Many rulers exercised absolute power over all their subjects Kings would show their power by trying."— Presentation transcript:

2 The “Age of Absolutism” Many rulers exercised absolute power over all their subjects Kings would show their power by trying to throw the best balls, banquets, entertainment, etc The Duke of Weimar in Germany threw Johann Sebastian Bach in jail for a month because he asked if he could leave his job!

6 Music is a HARD JOB to do! Instead of one work being five to ten minutes, composers began to do works that would be an hour long, but would be divided into “MOVEMENTS” In order to be a well-paid musician of the baroque period, you either knew someone, or you replaced your father… etc Musicians had to pass many examinations for the kings and would submit work to get positions!

7 JOHANN SEBASTIAN BACH 1685 – 1750 – Born in Germany Was known for the composer that ended the era His father, grandfather, and great-grandfather were church musicians Bach had 20 children! ; 4 became musicians! Bach had several brothers that were also musicians in the town

8 Bach received his first music lessons from his father, who was the town musician. He also received lessons from his cousin, the church organists for many years When he was 9, his parents died and he went to live with his oldest brother, who was a composer and organist nearby He stayed here till 15, where he moved to another nearby town and supported himself by singing, playing violin, and piano for the church

9 Bach “Loves” his family… Bach was 18 when he worked at the church in Arnstadt. His church authorities became nervous about his relationship with a very “strange maiden” that he left in the middle of the night to meet in the alley They found out that he was actually having a relationship with his cousin, Barbara Bach

10 He left the job and found a better job in a town nearby They were unaware of the relationship/family ties and had a huge celebration where he married his cousin! He stayed at this church and was “pampered” for many years. When a senior musician retired, Bach wanted the job; and was denied the position He decided to leave when he was not offered the job he wanted

11 Bach’s new job For approximately 10 years, he obtained another organist job and conducted the town’s symphony. He was paid second highest in the land (just under the marshal of the court! Just afterwards, Bach’s cousin/wife died; left him with 4 children and a lot of bills (She was a big spender!!!)

12 Bach finds another love His wife died (at 45). Bach found another love at 46 yrs old… he married a 16 year old singer after only dating her for 3 weeks! His interest in her declined after 4 weeks, as she said she did not like his music! He left her and filed for another divorce and again, found another job He got the position of music director for the St. Thomas Church or Leipzig, Germany

13 Bach remained here for the final 20 years of his life He only dated those that were under 20 yrs old, and would sometimes offer them free music lessons for a date!! By being in Leipzig, he had 30,000 people to entertain (largest city). He had 55 students in the Leipzig University and another 25 students that he taught in the St. Thomas school of music He and his students gave town concerts every Friday night in Leipzig.. Became the main centerpiece for entertainment of the city

14 Bach’s Time is Ending… In the 1740’s Bach’s eyesight was deteriorating, but he still worked hard to compose, conduct, and teach In 1750, he totally became blind and was so distraught that he could not do what he wanted to continue to do with his life, he was said to have grieved himself to death…

Download ppt "The Baroque Period 1600 - 1750. The “Age of Absolutism” Many rulers exercised absolute power over all their subjects Kings would show their power by trying." 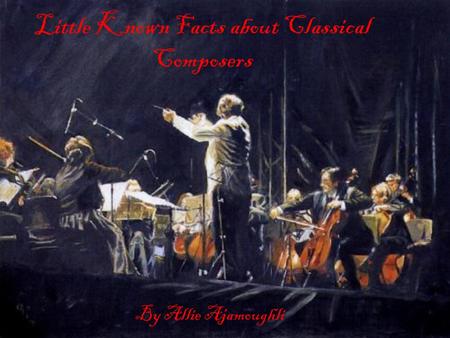 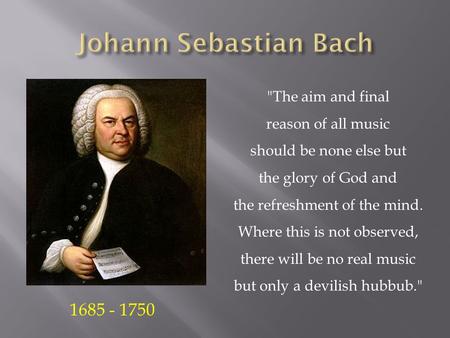