Development of Feudalism Chapter 2. Periods of the Middle Ages Historians have divided the Middle ages into three periods: ◦ The Early Middle Ages lasted.

3 Feudalism Feudalism is the economic and political system that developed in Europe during the Middle Ages. Feudalism developed different social classes. In this there were more people in the lower class than in the higher classes.

5 After Rome For 500 years much of Europe was a part of the Roman Empire. The rest of Europe was controlled by, what the Romans called, barbarians. Barbarians are people belonging to a tribe or groups that is considered uncivilized. Rome fell to invading barbarians. This left Europe without a central government, or central defense.

6 Kingdoms after Rome Without a central government or system of defense; many invading groups set up kingdoms. The kingdoms were often at war with one another. The most powerful rulers were those who controlled the most land and had the best warriors.

7 The Franks The Franks were successful because they created a new style of warfare. At the age of 15, Clovis became the king of the Franks. During his 30 year reign he led the Franks in war and widened the kingdom. He also lead the Franks to Christianity. He led his followers to become members of the Roman Catholic Church.

8 Charlemagne’s Empire Charlemagne is also known as Charles The Great. He ruled over 40 years. And was their most important leader. He encouraged education. Charlemagne’s empire survived many barbarian attacks. After his death, the rulers after him could not defend the empire. But, his example was followed of rewarding the knights.

9 Charlemagne and the church He also unified nearly all the Christian lands in Europe into a single empire. Charlemagne had the help of the pope Leo III, who was the leader of the Roman Catholic Church. The church was a central part of the society during this time.

10 A need for protection The Muslims, Magyars, and the Vikings were the three main groups that threatened western Europe. The people needed a way to protect their selves from attacks of these three groups. They gradually developed a system we call feudalism.

11 Establishing Feudalism The feudal system provided the people with protection by establishing a stable social order. Each person played a role in society. And each person would be protected as long as they do their job.

12 How feudalism works All the land in the kingdom belong to the monarch (a king or queen). The monarchs gave the lords fiefs; in return the lords provide the king with knights in times of war. At the bottom was the serfs. The serfs sometimes were able to rent their land. But others were “tied” to the land they worked. And they could not leave their lords land.

13 Manors Most lords and wealthier knights lived on manors. A manor included a castle or manor house, one or more villages, and the surround farmland. These were far away from towns so the serfs had to produce everything the people on the manor needed.

15 Class Flow Chart This chart shows what flow of the class systems and how the serfs are connected to the king through taxes. Social Class was for life and you were born into the social class of your parents.

16 Monarchs In Feudal Times The Monarchs believed in the divine rights of kings. This is the belief that God gives monarchs the right to rule. Some had to work hard to keep their power. Few had enough wealth to keep their own army. ◦ They had to look to their nobles to provide them with knights and soldiers.

17 William the Conqueror William was upset when England crowned his cousin. He and his army invaded England and defeated his cousin at the Battle of the Hastings. This established a line of Norman kings.

19 Castles The earliest castles were built of wood and were surrounded by high wood fences. They had a motte was the strongest part of their security. The Bailey is were they lived in the castle.

20 Later Castles The castles become more elaborate. Many had tall towers for looking out across the land. The main castle would have: storerooms, a library, a dining hall, bedrooms for distinguished guests and the lord and lady’s quarters.

21 Daily life of Women Noble women were not land owners, but were still very busy. They were responsible for raising their children and also training their children. They were also to look over their household. Which some had hundreds of people like: priests, master hunters, knights-in-training, cooks, servants, artists, craftspeople and grooms.

22 It was not all good for nobles Houses lit only by candles and warmed by an open fire. So, they could be gloomy and cold. Hardly and privacy. Fleas and lice infected all buildings. Bathed once a week, clothes not washed daily. Disease affected the rich and poor.

23 Knights These were the soldiers of the middle ages. The knights had some wealth. Their full suit of armor and a horse cost a small fortune. Knights were usually under a more powerful lords.

24 Becoming A Knight A boy started as a page, or servant. At 7 the boy went to live at a castle with a lord, who was often a relative. The ladies of the house taught them to sing, dance, compose music, and play the harp. After 7 years the boy becomes a squire. He polishes the knight’s armor, sword, shield and lance. In his early 20’s a squire would become a knight, if he was deserving.

25 Responsibilities of Knight Knights lived by a strong code of behavior called chivalry. Chivalry is the medieval knight’s code of ideal behavior, including bravery, loyalty, and respect for women. Knights were involved in jousts and tournaments. Knights were around until about the 17 th century when gunpowder and canons came around. Knights were no longer affective.

26 Jousting Jousting- two armed knights on horseback galloped at each other with lances held straight out. The idea was to unseat the opponent from his horse. It can be done as a sport, for exercise, or as a serious battle.

27 Question: How does a person become a knight?

28 Peasants The majority of the people were Peasants. They worked the land. Their labor freed the lord and knights to spend their time preparing for war or fighting. The peasants were classified either free or unfree. This was dependent on the amount owed to the lord. Free peasant rented their land for the lord. The unfree are known as serfs and could not leave the lord’s land.

29 Daily Life of Peasants Their lives revolved around work. Raised crops and tended livestock. Some manors also had carpenters, shoemakers, smiths, and other skilled workers. Women worked in the fields when they were needed and cared for their children and their homes.

30 Payments to the lord They had to pay a yearly payment called “head money”. This was a fixed amount from each person. If the lord needed money he could demand a tallage. When a woman married her father or husband had to pay a merchet fee.

31 Daily lives of Serfs Serfs also had to grind their grain at the lord’s mill. The miller would keep grain for himself and the lord. Many hid small hand mills in their houses. Lived in small houses of one or two rooms. Ate vegetables, meats such as pork, and dark, coarse bread made of wheat mixed with rye or oatmeal.

32 Reflection on Chapter Why did feudalism develop? How were the lives of serfs and knights different? Classify the different people living on a manor into groups. Label each group. 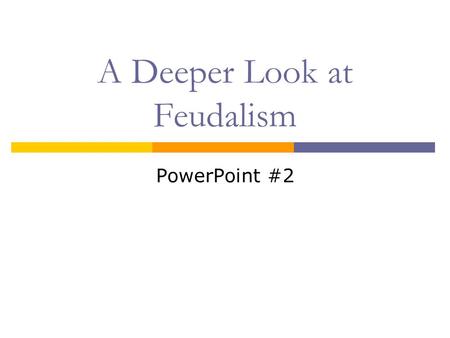 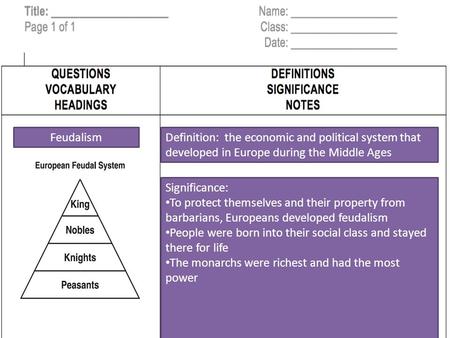 FeudalismDefinition: the economic and political system that developed in Europe during the Middle Ages Significance: To protect themselves and their property.