1 The Physical Geography of Canada
What does Canada ‘Look’ like?

2 Canadian Facts, Eh? Canada is the second largest country in the world (space wise, not population) It is slightly smaller than all of Europe which is made up of 45 countries. Canada is 4,800 kilometres from north to south and 5,000 kilometres from west to east. It only borders 1 country, the United States. 90% of Canada is too cold for agriculture to take place.

4 Landforms and Soils The physical make up of Canada is the result of geologic developments: For example, the bringing together of several smaller continents more than 2,000 millions years ago accounts for the different types of rocks found in the Canadian Shield. For example, the mountain systems are geological developments (The Rockies). The landscape of Canada was also affected by glaciation and was under a thick sheet of ice called a glacier. Almost all of Canada was under ice a sometime during the last 1.5 million years. Now only 1% is under ice.

8 Western Cordillera… The west coast has a maritime climate. The region is a major source of lead, zinc, copper, and gold. Therefore, the economies in the Western Cordillera are based on logging, mining, and tourism.

9 2. Prairie Plains The word prairie usually refers to a type of grassland, and true prairies occur only in the far southern reaches of Alberta and Saskatchewan.

10 Plains… It also refers to all of the farmland in the provinces of Alberta, Saskatchewan, and Manitoba. This prairie definition comes from the human use of the land which is mostly farming

11 The prairies may also include the entire area of all three of those provinces; a region known as the Prairie Provinces. The Prairie Provinces are included among the provinces of Western Canada, and historically this region was called the Canadian Northwest or simply "the West“.

12 Prairie Economics Primary industries include agriculture (wheat, barley, canola, oats), and cattle and sheep ranching. Also, natural resources such as tar sands (Fort McMurray, Alberta) and other forms of oil production can be found on the plains. Secondary industries consist of the refinement of oils and agriculture processing.

13 Recent Growth in the Prairies
Some of the prairie region of Canada has seen rapid growth from a boom in oil production since the mid-20th century. Alberta has seen a record increase in population, second only to Ontario, and Manitoba has experienced record immigration levels.

14 3. Canadian Shield Largest region that includes most of Quebec, Ontario, northern Manitoba, northern Saskatchewan, Nunavut and half of the NWT. A varied landscape with lots of bog, muskeg, drumlins, eskers and lake basins.

15 Has very rich mining opportunities including nickel, uranium, gold, silver and copper.
Mostly covered by Boreal forest (conifer trees) but can also have areas of dense soil were many marshes and bogs are found.

16 4) Arctic North The North region is located above the lie of continuous permafrost bordering the Arctic Ocean and Hudson Bay. Permafrost is soil that remains frozen for more than 2 years. It includes a major part of the NWT and small parts of the Yukon, Manitoba, Ontario, and Quebec.

17 Arctic Population and Cities
Over 20 Aboriginal bands live in the region, as well as over 30, 000 Inuit. Earliest Europeans came around 1500s during the age of exploration.

18 The search for the Northwest Passage again brought more European attention to the region in the mid-1800s.

19 The Arctic Economy: Then and Now
Gold discoveries in the Yukon in the 1890s and mining finds in the 1930s brought more significant settlements. In recent years, oil and gas exploration in the Beaufort Sea and Arctic Ocean have brought more people Trapping and fishing. Mineral Resources: gas and oil deposits have been found. Metallic minerals have also been found, including zinc, iron ore, lead, and, most recently, diamonds

20 Pictures from the North

24 6) Atlantic Region Covers 2 percent of Canada’s area.
Includes Nova Scotia, New Brunswick, and Prince Edward Island, bound together by fisheries and forests. In total has about 11,200-kilometres of shoreline In the 20th century, the Atlantic provinces faltered with slow economic and population growth. For example, as the fishing industry declined, as did many jobs. Yet, as a new century dawns, offshore oil and gas development promises to quicken the economic pace.

26 Surface Waters in Canada
Canada has 5 main drainage basins: Hudson Bay Arctic Ocean Atlantic Ocean Pacific Ocean Gulf of Mexico These drainage basins not only cycle water around our country, but also can be used for transportation, opportunities for power (hydro dams), fishing, recreation and provide water for many uses. 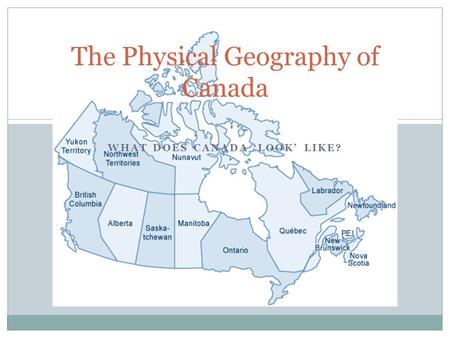 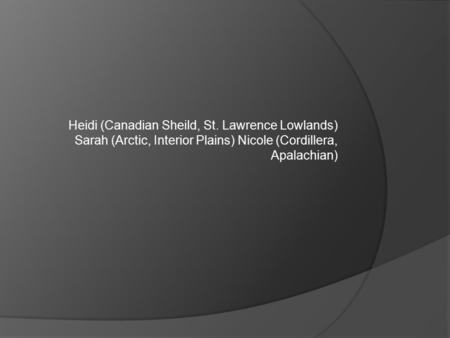 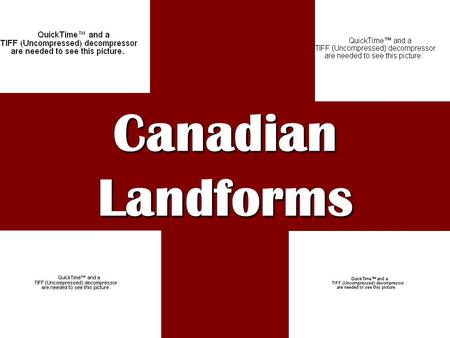 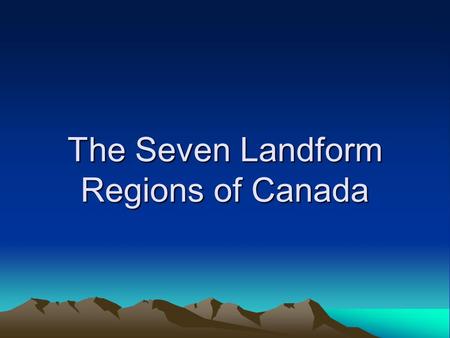 The Seven Landform Regions of Canada