3 Regions of the 13 Colonies

8 Colonists in New England Colonies…
The Puritans and Separatists The Puritans were English people who complained about the Anglican Church with all their Catholic practices and traditions. They wanted a “purer” kind of church. The Separatists were Puritans who separated themselves and started separate churches of their own. This group of people were also known as Pilgrims.

9 Economic Activities of the New England Colonies…..
Small farms and long distance trade. Did not rely heavily on local crops. They conducted “carrying trade” in which they carried crops and goods from one place to another. They hauled china, books, and cloth from England to the West Indies in the Caribbean and received sugar where it was distilled into rum. In return they traded rum to West Africa for slaves and firearms. (Triangular Trade)

10 Explain Triangular Trade
Trade between three points in the Atlantic World. Trade was conducted between the Americas, Europe and Africa. ***Middle Passage – longest and most gruesome leg of the Triangular Trade route for Africans.

11 Group of colonists who settled in Middle Colonies……
These settlers came from several countries. Holland, Sweden, France, Germany and of course England. The Dutch came and settled New York. The English forced the Dutch out and renamed New York from New Amsterdam

12 Economic activities of the Middle Colonies
Mixture of farming and commerce. They specialized in growing grains, oats, wheat barley and rye.

13 Freedom of Press In 1734, a printer and publisher named John Peter Zenger published for the New York Journal for publishing libelous (false) stories critical of the governor of New York. Zenger’s lawyer argued that if the stories were true then they could not be considered libel. Zenger won the case, a landmark victory for freedom of press in America.

14 Southern Colonies settlers…..
Jamestown was settle with goals of finding riches. They were in search of the Northwest Passage. Englishmen wanted new markets. English believed that their homeland was becoming too crowded. Maryland was settled for those Catholics escaping religious persecution in England. The Carolinas were established as buffer colonies to keep the Spanish from invading the other English colonies. Georgia was established as a haven for debtors

15 Economic activities of the Southern Colonies
Economy was based on staple crops. These were crops that were in constant demand. In Virginia and North Carolina the staple crop was tobacco. In South Carolina and Georgia the crop was rice. 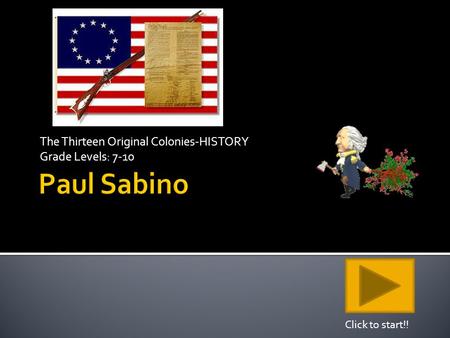