Presentation on theme: "The English Colonies in America. Goals Distinguish between the New England, Middle, and Southern Colonies Understand the causes of regional differences."— Presentation transcript:

1 The English Colonies in America

2 Goals Distinguish between the New England, Middle, and Southern Colonies Understand the causes of regional differences between the colonies Work collaboratively to create a booth to promote the best features of a colony including economic, political, and religious freedoms

8 Spoke Diagram What is at the hub of the diagram? What are on the spokes? What do the spokes tell you about New Jersey?

11 Governing the Colonies Charter: document defining the land and how the colony would be governed Assembly: elected group of law makers Democratic: decisions made by people Not a “true” democracy for women, servants, or slaves

14 Tasks to be completed workday 1 1. Decide on roles 2. Read the section about your colony 3. Decide as a group what the strong selling points of your colony should be 4. Brainstorm a slogan, saying or theme to use throughout all of your products 5. Begin work on your part 6. Remember you are earning 5 pts today!

16 Day 3 Workday 1 copy of handout to Mr. Ibbotson 1 copy of song to Mr. Ibbotson Banner completed and colored (read rubric) Practice singing song Head realtor writes speech *Note: 3 minutes long, you are verbally explaining the banner and handout trying to sell your colony. This 3 minutes does not include the song or passing out the gimmick!

19 New York New Amsterdam then New York 1664 Part was given to make N.J. Poor vs. Rich Taxes and capitalism Rights of the colonists vs. the royal governor

20 Pennsylvania Pacifist Repayment of a debt and get rid of William Penn All people treated equally Jobs, peace, prosperity, tolerance, self government

22 Virginia Roanoke, Jamestown, and tobacco Plantations for cash crops with slaves and indentured servants 1661 House of Burgesses pass a law making African slaves for life By 1700, 16,000 Africans (1/4 of the population of Virginia)

Download ppt "The English Colonies in America. Goals Distinguish between the New England, Middle, and Southern Colonies Understand the causes of regional differences." 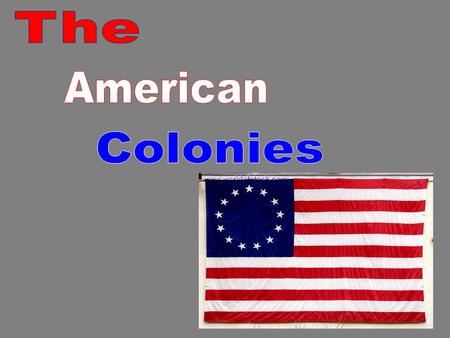 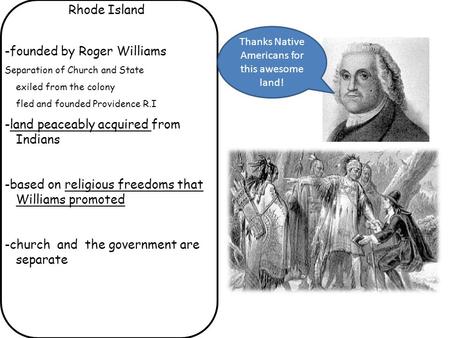