3 What steps do you think a person needs to do in order to run for any public office position in the U.S. (including President)?

6 1. Self Announcement Oldest form of nomination
1st used in colonial times The person who wants to run for office just announces that they will run Can also be in the form of a write in

7 2. Caucus A group of like minded people who select the candidate they will support 1st appeared in 1720 Still used today in New England for local elections

8 3. The Convention Came into use after the caucus method collapsed
1st used in 1831 Today all major parties use the convention to nominate candidates for President and other offices

10 4. The Direct Primary Election held within a party to select a candidate for the general election 1st used in 1903 Most states have primaries in which the people choose their candidates 1) Open Primary- any voter can cast a ballot 2) Close Primary- only party members can vote 3) Blanket Primary- ever voter receives the same ballot (no longer used as of 2000)

13 5. Petition Candidates are nominated by getting signatures from registered voters

19 Barrack Obama Video Questions:
1. How are votes counted at the Democratic Caucus in Iowa? 2. What happens if a candidate receives less than 15% of the vote? 3. Which candidate wins the New Hampshire primary? 4. What happens on Super Tuesday?

22 Sources of Funding Private & Public sources:
1) small contributor: as little as $5.00 may be donated 2) wealthy individuals 3) Candidates (Ross Perot spent 65 million of his own money in 1992) 4) Political Action Committees (PACs)- special interest groups who have a stake in elections 5) Fundraisers

23 Regulating Campaign Finance
Unlawful for corporations or banks to make contributions in any election Corporations, banks and labor unions can not donate money in Federal Elections Federal Election Committee- administers the laws of election finance

24 Limits on Contributions
No person or group can make a donation in another persons name Cash gifts over $100 are not allowed No contributions from a foreign source Anything over $200 must be identified and dated Anything over $5,000 is reported to the FEC no later than 48hours after it is received

26 Revenue Act of 1971 When you file taxes one can contribute $3.00 to the Presidential campaign Money goes to pay for national conventions and the campaign process 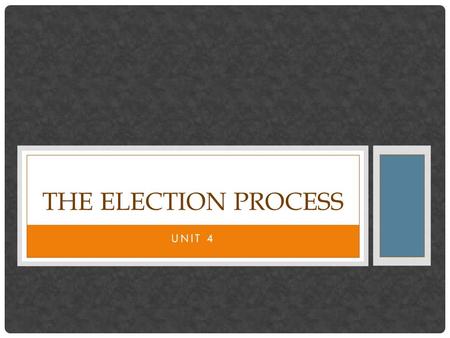