2 What is Science Science What is science?
begins with curiosity and often ends with discovery is a system of knowledge and the methods you use to find that knowledge Ask : what is science?

3 Demo – Candle in a Jar Can you prove the existence of something invisible? What do you predict will happen if the jar is covered? What invisible substances did you assume in your explanation? Oxygen, carbon dioxide The candle will go out once the oxygen in the jar is used up. (lid or aluminum foil)

4 Steps in the Scientific Method
Observation Hypothesis Experiment Data Collection Conclusion Retest Can you think of something where you have to do things in a specific order? (ie playing a game) What about something where the order is flexible? (ie cleaning a room). Do you think order is important in science?

6 Observations An example of an observation might be noticing that many salamanders near a pond have curved, not straight, tails Is information that you obtain through your senses Is an observation required in order for you to arrive at a question?

7 Hypothesis A suggested solution to the problem. Must be testable
Sometimes written as If…Then… statements Predicts an outcome What does it mean to be testable? Why would we want it to be testable? Make a hypothesis about why a salamanders tail might curved near a pond. be What can you do with a your hypothesis?

8 Hypothesis An example of a hypothesis might be that the salamanders have curved tails due to a pollutant in the moist soil where they live.

10 Variable – factor in the experiment that is being tested

11 A good or “valid” experiment will only have ONE variable!

14 What is the Purpose of a Control?
Controls are NOT being tested Controls are used for COMPARISON

18 One more thing… it is best to make several trials with each independent variable.
An experiment must be repeatable for it to be valid!

25 Scientific theory What is a theory?
A well-tested explanation for a set of observations or experimental results Not the same as the way we use ‘theory’ in everyday language Are NEVER proven, but become stronger (or weaker) with new information Empirical evidence (by observation or experiment) 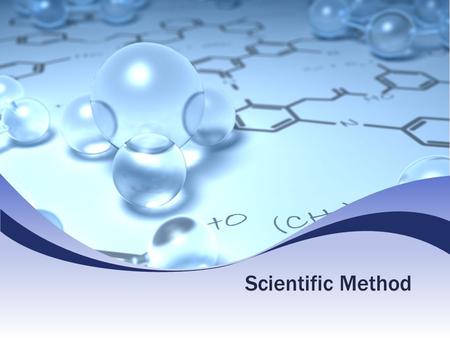 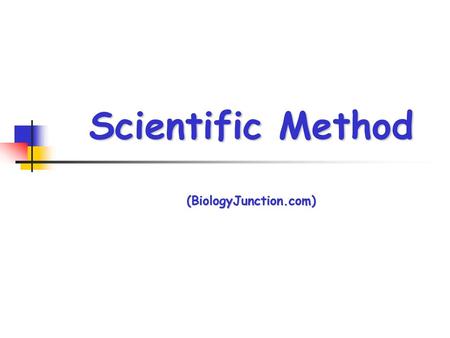