2 The Development of Sociology
Social upheaval in Europe during the late 1700s and 1800s encouraged scholars to closely study society. European scholars such as Auguste Comte, Harriet Martineau, Herbert Spencer, Karl Marx, Émile Durkheim, and Max Weber made important contributions to the development of the academic discipline of sociology.

3 How did one early sociologist view the problem of poverty?

5 Pre-Sociological Influences
Even though Plato is not considered the “father” of sociology – he is probably the first person to systematically study society in a “sociological” way. In other words he thought like a socialist.

6 Pre-Sociological Influences
The basic notion of natural law is found in Plato’s Republic. Plato’s Six Basic Assumptions of Society Man is an organism. Organisms tend toward survival. Man survives in groups. Man is a social animal. Man lives in an ordered society. The order of society is knowable.

7 Auguste Comte French philosopher who is credited with giving the discipline its name. Often referred to as the “father of sociology.” Believed that the fate of mankind depends in many respects upon the development of a science of human social relationships. Saw sociology as the “last science” to be developed.

9 Émile Durkheim Like Comte, Durkheim was a Frenchman who believed in the notion of a science of society. Durkheim set out to study social facts. These are those aspects of social life—for example, religion, the economy—that shape individual action. Durkheim elected to pursue this approach by using an analogy of society to the human body, and aspects of society like religion, the economy, politics—these are often referred to as social institutions—as parts of the body. He saw that these various social organs or parts had an effect on people, and also on society as a whole. Émile Durkheim ( 1858– 1917)

10 Émile Durkheim Durkheim wanted to understand what society needed to function harmoniously, and additionally wanted to be able to diagnose the problem when a social issue arose. Was interested in what societies needed to function smoothly. Studied social constraint, social isolation, and anomie (normlessness) in relation to social change and human behaviors such as suicide.

11 Émile Durkheim One important example was Durkheim’s study of suicide, which is typically understood to be a personal problem, but which Durkheim approached sociologically. What he found was that people with either too much or too little connection to society or who, for whatever reason, felt a sense of normlessness (anomie) were more likely to commit suicide, as were people of certain religious traditions or those who lived under particular types of political systems. In all this, Durkheim was also busy trying to understand the way the changes wrought by industrialization were affecting individuals and societies. Durkheim’s theoretical perspective is often described as consensus theory.

13 Emile Durkheim Durkheim introduced the use of statistical techniques for testing social theories.

15 Karl Marx Marx was never actually a professional sociologist. His training was largely in philosophy and economics, and his career was largely as a politically active journalist who found himself exiled from his native Germany. In seeking to explain social change Marx looked primarily to the economy. Karl Marx ( 1818– 1883)

16 Karl Marx Marx eventually settled in England, where he became increasingly focused on the lives of urban laborers in the expanding factory system. He then spent much of his career describing in exquisite detail the workings of the capitalist system and the exploitation it wreaked on workers. He juxtaposed the wealth and power of the bourgeoisie (the capitalists) with the poverty and servile nature of the proletariat (the workers). Karl Marx ( 1818– 1883)

17 Karl Marx Karl Marx wanted social scientists to change the world instead of merely studying it. Developed what is called a materialist conception of history, whereby the economy, and not values, culture, or ideas, drives social change. Focused primarily on the ills of capitalism and its class system. Karl Marx

18 Karl Marx Predicted that ultimately the class conflict built in to the capitalist system would lead to its demise and that a new, classless society would emerge. What Marx saw was an inevitable revolution where the proletariat would rise up and overthrow the bourgeoisie. What followed would be a new kind of society where no single, small class would control all the resources. for much of the second half of the twentieth-century, an ideological Cold War was waged between democratic, capitalist countries (mostly in the West) and those that claimed communist or socialist forms of organization (mostly in the East). These communist and socialist regimes claimed a Marxist ideology Marx’s ideas have had a great deal of influence, both within sociology and in world political history.

21 Harriet Martineau Martineau was a very important figure for several reasons: She was a prominent female scholar in an era where she was very much the exception. Brought sociology from France and Germany to England, when she translated Comte’s work. Among her contributions was the idea that sociologists must not only study important institutions in the public sphere—the economy, religion, politics—but must also look to the private sphere and examine families, children and the lives of women. Martineau was also a strong proponent of both women’s rights and the emancipation of slaves. Harriet Martineau

25 Max Weber Though he, too, was interested in explaining social change, Weber saw power, not only in the economy, but also in ideas and values. Weber is said to have been arguing with the ghost of Marx in much of his work. While he surely agreed with Marx that changes in the economy—namely industrialization—played a critical role in the broader shifts taking place in society, Weber also emphasized the importance of culture and ideas. In particular Weber argued that Christianity, in the form of the Protestant work ethic, played an important role in the development of capitalism. Max Weber ( 1864– 1920)

26 Max Weber Max Weber Max Weber claimed that humans act on the basis of their own understanding of a situation. Weber was also interested in the increasing rationality of the social world and studied the structure of bureaucracies. Like Marx, Weber was not strictly a sociologist. He Studied many other aspects of social life, including religion, law, and power, and was always attuned to the ways people make meaning out of life.

27 Max Weber A final thing that set Weber apart from the other early theorists was his interest in how individuals make meaning out of their lives. Though he was clearly focused in many ways on large-scale social institutions like religion and bureaucracy, he also wanted to understand how the changes in these aspects of the social institutions affected individuals and how they themselves would understand their lives.

30 Later European Scholars
Émile Durkheim Developed first sociology class in France Systematically applied the methods of science, focus on observable aspects Viewed segments of society by their function Function - consequence that an element of society produces for the maintenance of its social system Particularly interested in the role of religion Max Weber Interested in certain groups instead of an entire society Used the idea of Verstehen to understand the actions of individuals Verstehen – attempt to understand meanings individuals attach to their actions Used the idea of ideal type to understand the goals of a society Ideal Type – essential characteristics of a feature of society

31 W.E.B. DuBois W.E.B. Du Bois was the first African American sociologist. He made many contributions to the field, including the notion of the “double consciousness” experienced by all American blacks. Du Bois was also a founding member of the National Association for the Advancement of Colored People (NAACP). W.E.B. Du Bois

32 W.E.B. DuBois DuBois’s work has been profoundly important, not only in the sense of emphasizing the need to examine the history of groups in society, but also in study of the development of identity. The now-famous idea of “double consciousness” is intended to express the way in which all African Americans must see themselves, not only through their own eyes, but also through the eyes of a society that degrades them.

34 Jane Addams Jane Addams was the best known of the early women social reformers in the United States. Addams focused on the women’s suffrage and peace movements, as well as the effects of industrialism on the lower class. Addams was awarded the Nobel Peace Prize in 1931. Jane Addams

36 American Scholars The University of Chicago department of sociology became known for a certain set of sociological theories, as well as the idea that sociologists should look for solutions to social problems. Opened a settlement house in Chicago Published a series of surveys about the problems of the urban poor Not taken seriously as a sociologist Jane Addams Took an approach similar to the Chicago School Examined life in African American neighborhoods Encouraged scholars to examine the problems of race W.E.B. Du Bois – 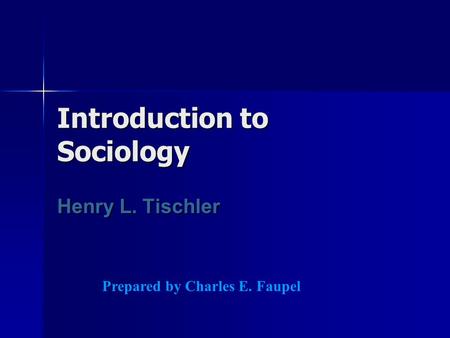