Presentation on theme: "THINK ABOUT IT What happens to energy stored in body tissues when one organism eats another? Energy moves from the “eaten” to the “eater.” Where it goes."— Presentation transcript:

1 THINK ABOUT IT What happens to energy stored in body tissues when one organism eats another? Energy moves from the “eaten” to the “eater.” Where it goes from there depends on who eats whom!

2 Food Chains A food chain is a series of steps in which organisms transfer energy by eating and being eaten. Food chains can vary in length. An example from the Everglades is shown.

3 Food Chains Within Food Webs
@Each path through a food web is a food A food web, like the one shown, links all of the food chains in an ecosystem together. The orange highlighted food chain, presented earlier, is one of many that make up this web.

4 Decomposers and Detritivores in Food Webs
Most producers die without being eaten. In the detritus pathway, decomposers convert that dead material to detritus, which is eaten by detritivores, such as crayfish, grass shrimp, and worms. Pig frogs, killifish, and other fishes eat the detritivores.

5 Decomposers and Detritivores in Food Webs
At the same time, the decomposition process releases nutrients that can be used by primary producers. They break down dead and decaying matter into forms that can be reused by organisms, similar to the way a recycling center works. @Without decomposers, nutrients would remain locked in dead

6 Food Webs and Disturbance
In recent years, krill populations have dropped substantially. Given the structure of this food web, a drop in the krill population can cause drops in the populations of all other members of the food web shown.

7 Trophic Levels and Ecological Pyramids
Each step in a food chain or food web is called a trophic level. @Primary producers always make up the first trophic Various consumers occupy every other level. Some examples are shown.

8 Pyramids of Energy Organisms expend much of the energy they acquire on life processes, such as respiration, movement, growth, and reproduction. Most of the remaining energy is released into the environment as heat—a byproduct of these activities.

9 Pyramids of Energy @On average, about 10 percent of the energy available within one trophic level is transferred to the next trophic The more levels that exist between a producer and a consumer, the smaller the percentage of the original energy from producers that is available to that consumer.

11 Pyramids of Biomass and Numbers
A pyramid of biomass illustrates the relative amount of living organic matter at each trophic level. @Typically, the greatest biomass is at the base of the pyramid, as is seen in the field ecosystem modeled

12 THINK ABOUT IT A handful of elements combine to form the building blocks of all known organisms. Organisms cannot manufacture these elements and do not “use them up,” so where do essential elements come from? How does their availability affect ecosystems?

13 Recycling in the Biosphere
Unlike the one-way flow of energy, matter is recycled within and between ecosystems. Elements pass from one organism to another and among parts of the biosphere through closed loops called biogeochemical cycles, which are powered by the flow of energy.

14 Biological Processes Biological processes consist of any and all activities performed by living organisms. These processes include eating, breathing, “burning” food, and eliminating waste products.

15 Geological Processes Geological processes include volcanic eruptions, the formation and breakdown of rock, and major movements of matter within and below the surface of the earth.

16 Chemical and Physical Processes
Chemical and physical processes include the formation of clouds and precipitation, the flow of running water, and the action of lightning.

17 Human Activity Human activities that affect cycles of matter on a global scale include the mining and burning of fossil fuels, the clearing of land for building and farming, the burning of forests, and the manufacture and use of fertilizers.

19 The Water Cycle If the air carrying it cools, water vapor condenses into tiny droplets that form clouds. When the droplets become large enough, they fall to Earth’s surface as precipitation in the form of rain, snow, sleet, or hail.

20 Nutrient Cycles What is the importance of the main nutrient cycles?
Every organism needs nutrients to build tissues and carry out life functions. Like water, nutrients pass through organisms and the environment through biogeochemical cycles. The three pathways, or cycles, that move carbon, nitrogen, and phosphorus through the biosphere are especially critical for life

21 Nutrient Cycles The chemical substances that an organism needs to sustain life are called nutrients. @Every organism needs nutrients to build tissues and carry out life Nutrients pass through organisms and the environment through biogeochemical cycles.

23 The Carbon Cycle Plants take in carbon dioxide during photosynthesis and use the carbon to build carbohydrates. Carbohydrates then pass through food webs to consumers.

25 The Carbon Cycle @Carbon dioxide is released into the atmosphere by volcanic activity or by human Such as the burning of fossil fuels and the clearing and burning of forests.

26 The Nitrogen Cycle @All organisms require nitrogen to make amino acids, which are used to build proteins and nucleic acids, which combine to form DNA and Nitrogen gas (N2) makes up 78 percent of Earth’s atmosphere.

27 The Nitrogen Cycle Nitrogen-containing substances such as ammonia (NH3), nitrate ions (NO3), and nitrite ions (NO2) are found in soil, in the wastes produced by many organisms, and in dead and decaying organic matter.

28 The Nitrogen Cycle Although nitrogen gas is the most abundant form of nitrogen on Earth, only certain types of bacteria that live in the soil and on the roots of legumes can use this form directly. The bacteria convert nitrogen gas into ammonia, in a process known as nitrogen fixation.

29 The Nitrogen Cycle Consumers eat the producers and reuse nitrogen to make their own nitrogen-containing compounds. Decomposers release nitrogen from waste and dead organisms as ammonia, nitrates, and nitrites that producers may take up again.

30 The Nitrogen Cycle Other soil bacteria obtain energy by converting nitrates into nitrogen gas, which is released into the atmosphere in a process called denitrification.

31 The Phosphorus Cycle @Phosphorus forms a part of vital molecules such as DNA and Although phosphorus is of great biological importance, it is not abundant in the biosphere.

33 The Phosphorus Cycle As rocks and sediments wear down, phosphate is released. Some phosphate stays on land and cycles between organisms and soil.

34 The Phosphorus Cycle Plants bind phosphate into organic compounds when they absorb it from soil or water.

37 Nutrient Limitation in Soil
The growth of crop plants is typically limited by one or more nutrients that must be taken up by plants through their roots. Most fertilizers contain large amounts of nitrogen, phosphorus, and potassium, which help plants grow better in poor soil. Carbon is not included in chemical fertilizers because plants acquire carbon dioxide from the atmosphere. Micronutrients such as calcium, magnesium, sulfur, iron, and manganese are necessary in relatively small amounts, and are sometimes included in specialty fertilizers.

38 Nutrient Limitation in Soil
All nutrient cycles work together like the gears shown. If any nutrient is in short supply—if any wheel “sticks”—the whole system slows down or stops altogether.

40 Nutrient Limitation in Aquatic Ecosystems
The result of this runoff can be an algal bloom—a dramatic increase in the amount of algae and other primary producers due to the increase in nutrients. If there are not enough consumers to eat the algae, an algal bloom can cover the water’s surface and disrupt the functioning of an ecosystem.

41 1. Without these organisms, nutrients would remain locked in organisms
Herbivores Producers Heterotrophs Decomposers

Download ppt "THINK ABOUT IT What happens to energy stored in body tissues when one organism eats another? Energy moves from the “eaten” to the “eater.” Where it goes." 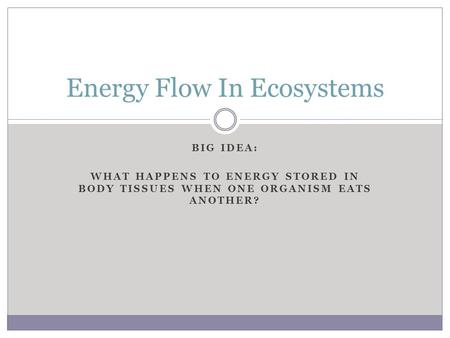 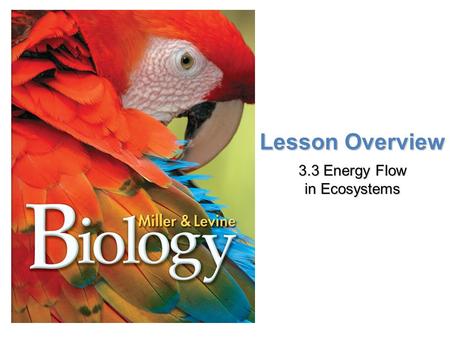