2 Neither a Borrower nor Lender….. Could Shakespeare be any more irrelevant? One of my son’s is a high school sophomore and is now studying the very same works of The Bard that still make me cringe. Seeing my son’s reactions to these works makes me realize that I can forgo the costs of genetic testing on him. I now know that he is my son. Where am I going with this? You know as well as I do that it often makes lots of sense to be a borrower. Sometimes it’s out of necessity. Have you tried buying a new home lately? With cash? Sometimes, you choose to borrow, because a great deal just lures you in. Can you really beat 0.00% credit card balance transfers? Just don’t forget to read the fine print. That fine print is a cash cow. Not for you, though. So we’ve all borrowed money, sometimes at outrageous rates. Wouldn’t it be great to start you own credit card company? In fact, have you ever lent anyone money? Have you done so in order to make a profit, or was it just to help out a friend or a relative? Few of us have ever lent money with the intent of making a profit. We usually felt that we were ahead of the game if we just got our money back – eventually. Well, lending to friends or relatives can be a quick and easy way to sever a relationship, despite The Bard’s contention that “blood is thicker than water”. At least I think that Shakespeare said that, but I’m not inclined to check out my sources on this one. You’re on your own. I don’t know who said “caveat emptor”, but you get the idea.

3 How about lending for profit? You’re right. You can’t start your own credit card company, but the very same thinking that created the Wikipedia, a pooling together of knowledge, can let anyone become a lender, as long as they don’t mind running afoul of biblical prohibitions against usury. Oh yes, and assuming some risk. Prosper.comProsper.com is where you need to be. An ingenious community of borrowers and lenders. Borrowers rated on credit worthiness and lenders competing for a piece of the pie. If you can part with some of your discretionary funds for 3 years, in return for monthly payments of principal and interest, this may be just the place for you. I won’t go into detail on how this program works. If you’re remotely interested, it would be in your best interests to personally check it out and figure out what your risk tolerance is. The higher the potential interest rate that a borrower pays, the greater the likelihood of default on your loan. You need to understand the nuances in order to make this play work for you. In a nutshell, a potential borrower is given a credit rating. The better the credit rating, the lower interest rate they are willing to pay. In effect, you are competing, via an auction, against other lenders to snare a good borrower. If you’re willing to take some more risk on the potential for default, you can get a higher interest rate. At some point, the statistics at prosper.com indicate that higher risk populations run a 25% default rate, as opposed to 1.2% for the highest rated borrowers. Szelhamos Rules The Blogs

4 So what does this have to do with diversification? Plenty. This is yet another investment vehicle. Not all investments are stocks, bonds and real estate. If you are interested in a stream of income, and are willing to forgo the potential for large capital gains on a portion of your investing portfolio, this play may be for you. So what to do? Diversify of course. But within your global portfolio, this small sector needs its own level of diversification. Do you really like the prospect of lending money to a single specific borrower? One whom you know only through the internet? Well, go ahead, but don’t throw all of your discretionary funds into this one pool. He’s looking to borrow $5,000 and you happen to have $5,000 to invest. A perfect match? Maybe, but for only 5%, 10% or some similar small fraction of your assets specifically set aside in a lending portfolio. Go ahead, you can find another borrower, who you can bid on for the right to profit or lose. Do it 10, 15 or 20 times, or have prosper.com do it for you using an automated program, whose lending criteria you specify.prosper.com There’s actually even a sweet spot in the risk-return ratio. While AA rated borrowers have the lowest default rate, they are just minimally less likely to default than A rated borrowers. But funny thing, A rated borrowers pay nearly 2% higher rates. Diversify your portfolio and prosper. Szelhamos Rules The Blogs 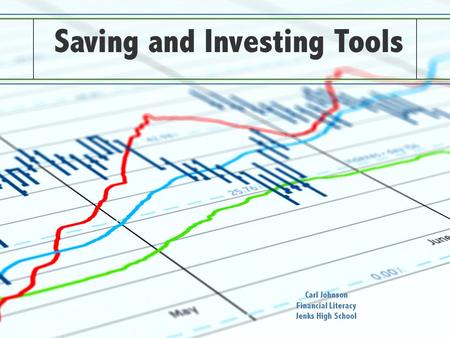 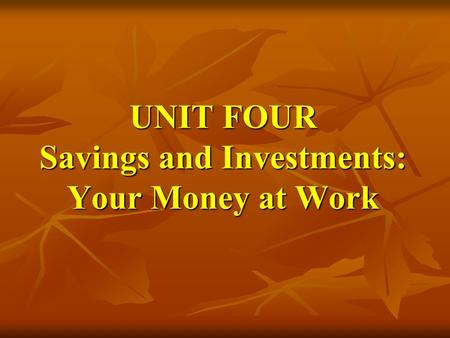 UNIT FOUR Savings and Investments: Your Money at Work 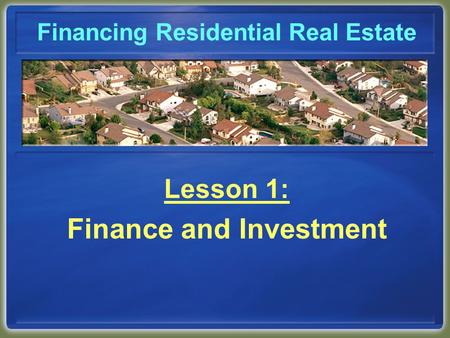 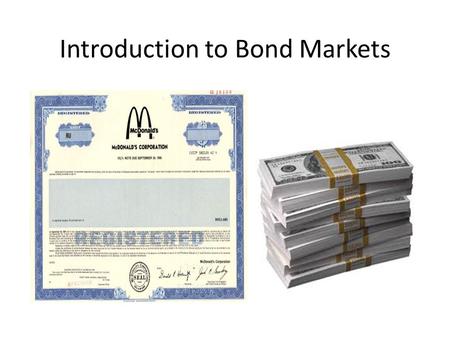 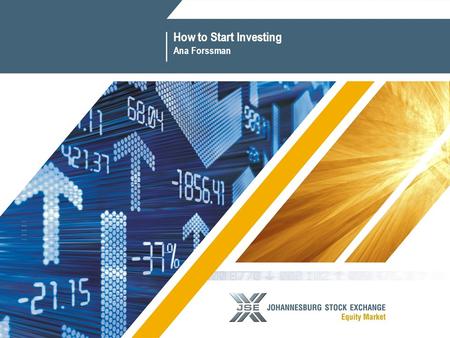 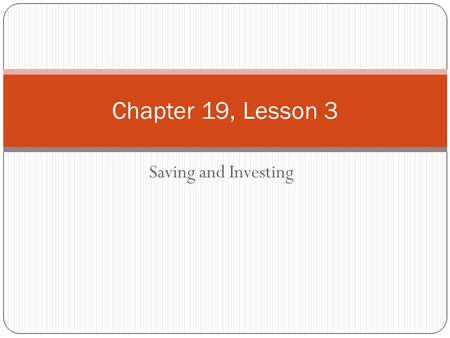 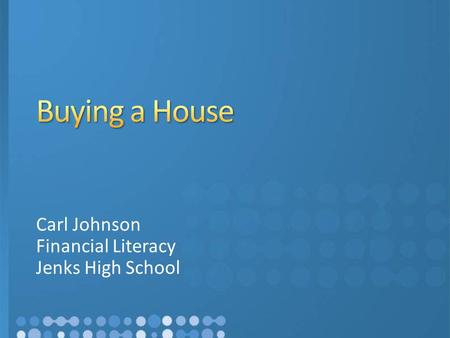 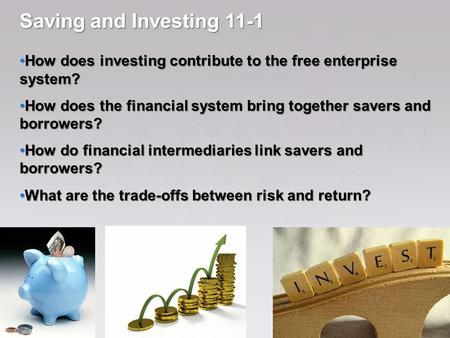 Saving and Investing 11-1 How does investing contribute to the free enterprise system? How does the financial system bring together savers and borrowers? 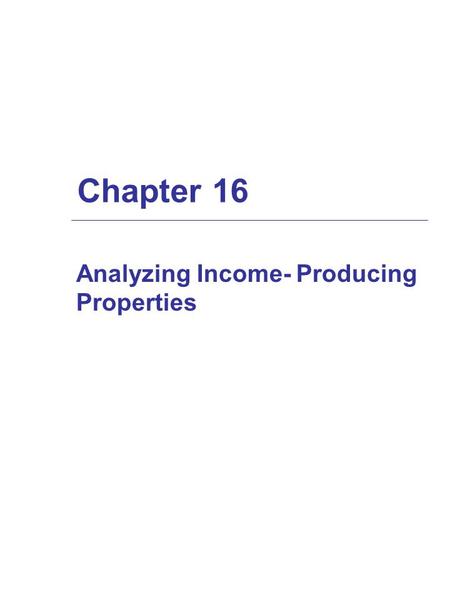 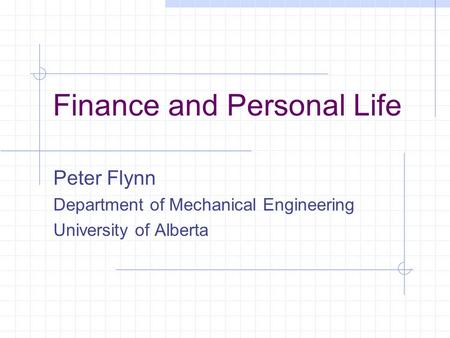 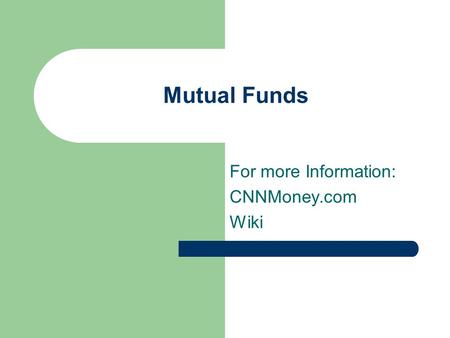 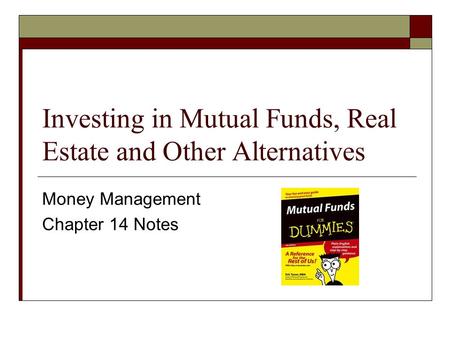 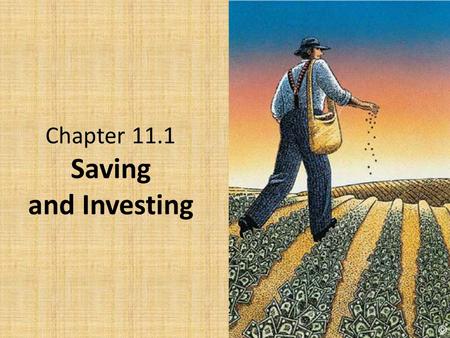 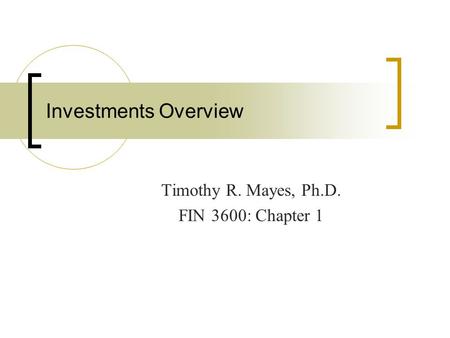 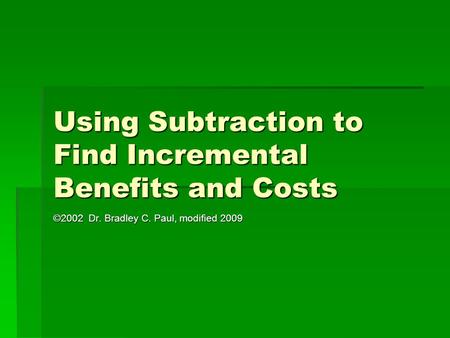 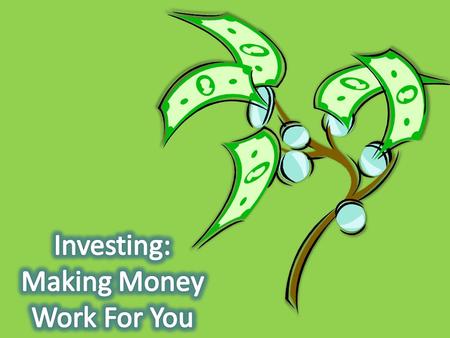 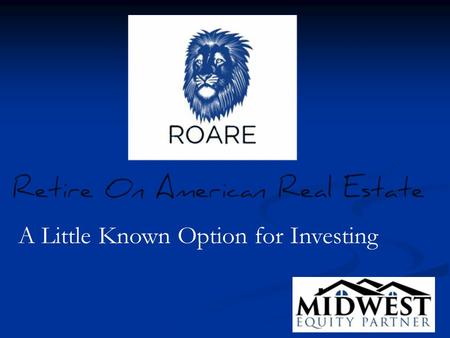 A Little Known Option for Investing. Would You Like More Choices For Your Investment Funds? It’s a common misconception among Americans that the only. 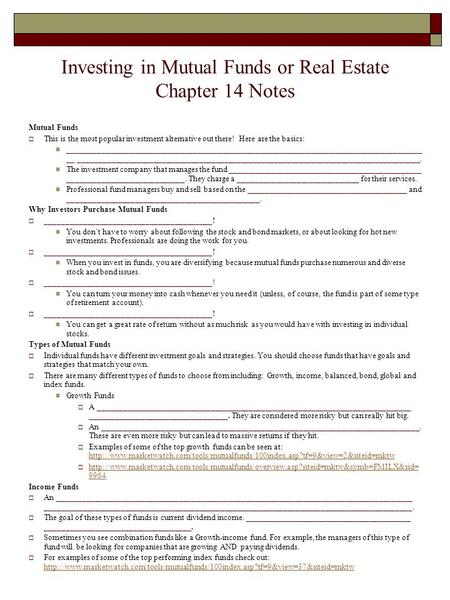 Investing in Mutual Funds or Real Estate Chapter 14 Notes Mutual Funds  This is the most popular investment alternative out there! Here are the basics: 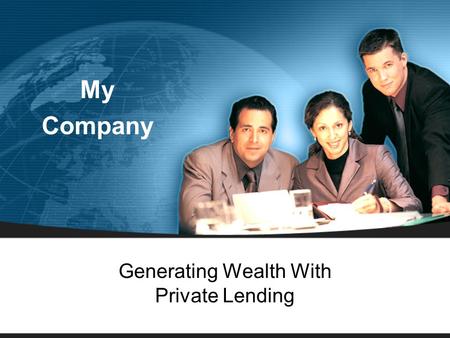 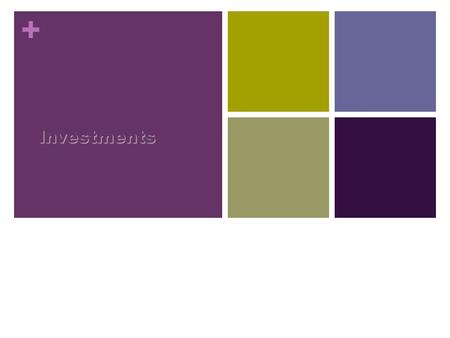 + Investments. + Learning Objectives Students will know investment options. Students will be able to identify relative risk, return and liquidity of the.