2 EECC551 - Shaaban #2 Fall 2005 lec#7 10-11-2005 Modified from Loop-unrolling lecture # 3 (3-14-2005) Data Parallelism & Loop Level Parallelism Data Parallelism: Similar independent/parallel computations on different elements of arrays that usually result in independent (or parallel) loop iterations when such computations are implemented as sequential programs. A common way to increase parallelism among instructions is to exploit data parallelism among independent iterations of a loop (e.g exploit Loop Level Parallelism, LLP). –One method covered earlier to accomplish this is by unrolling the loop either statically by the compiler, or dynamically by hardware, which increases the size of the basic block present. This resulting larger basic block provides more instructions that can be scheduled or re-ordered by the compiler/hardware to eliminate more stall cycles. The following loop has parallel loop iterations since computations in each iterations are data parallel and are performed on different elements of the arrays. for (i=1; i<=1000; i=i+1;) x[i] = x[i] + y[i]; In supercomputing applications, data parallelism/LLP has been traditionally exploited by vector ISAs/processors, utilizing vector instructions –Vector instructions operate on a number of data items (vectors) producing a vector of elements not just a single result value. The above loop might require just four such instructions. 4 vector instructions: Load Vector X Load Vector Y Add Vector X, X, Y Store Vector X

4 EECC551 - Shaaban #4 Fall 2005 lec#7 10-11-2005 Loop-Level Parallelism (LLP) Analysis Loop-Level Parallelism (LLP) analysis focuses on whether data accesses in later iterations of a loop are data dependent on data values produced in earlier iterations and possibly making loop iterations independent (parallel). e.g. in for (i=1; i<=1000; i++) x[i] = x[i] + s; the computation in each iteration is independent of the previous iterations and the loop is thus parallel. The use of X[i] twice is within a single iteration.  Thus loop iterations are parallel (or independent from each other). Loop-carried Data Dependence: A data dependence between different loop iterations (data produced in an earlier iteration used in a later one). Not Loop-carried Data Dependence: Data dependence within the same loop iteration. LLP analysis is important in software optimizations such as loop unrolling since it usually requires loop iterations to be independent (and in vector processing). LLP analysis is normally done at the source code level or close to it since assembly language and target machine code generation introduces loop-carried name dependence in the registers used in the loop. –Instruction level parallelism (ILP) analysis, on the other hand, is usually done when instructions are generated by the compiler. (In Chapter 4.4) S1 (Body of Loop) S1 Dependency Graph Iteration # 1 2 3 ….. 1000 …

8 EECC551 - Shaaban #8 Fall 2005 lec#7 10-11-2005 ILP Compiler Support: Loop-Carried Dependence Detection To detect loop-carried dependence in a loop, the Greatest Common Divisor (GCD) test can be used by the compiler, which is based on the following: If an array element with index: a x i + b is stored and element: c x i + d of the same array is loaded later where index runs from m to n, a dependence exists if the following two conditions hold: 1 There are two iteration indices, j and k, m  j, k   n (within iteration limits) 2 The loop stores into an array element indexed by: a x j + b and later loads from the same array the element indexed by: c x k + d Thus: a x j + b = c x k + d j < k Produce or write (store) element with this Index Later read (load) element with this index Index of element read(loaded) later Index of element written (stored) m, n

12 EECC551 - Shaaban #12 Fall 2005 lec#7 10-11-2005 Software Pipelining (Symbolic Loop Unrolling) New loop iteration body is made from instructions selected from a number of independent iterations of the original loop. (In Chapter 4.4) 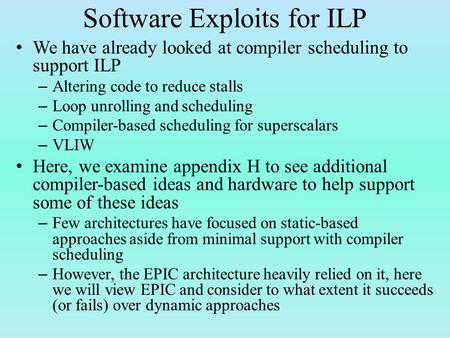 Software Exploits for ILP We have already looked at compiler scheduling to support ILP – Altering code to reduce stalls – Loop unrolling and scheduling. 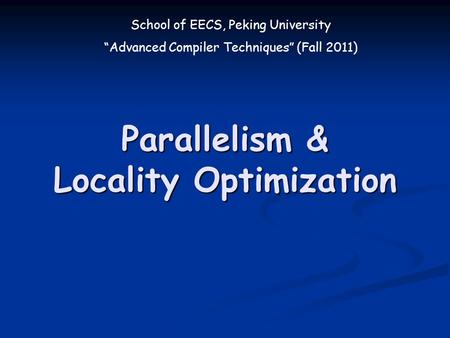 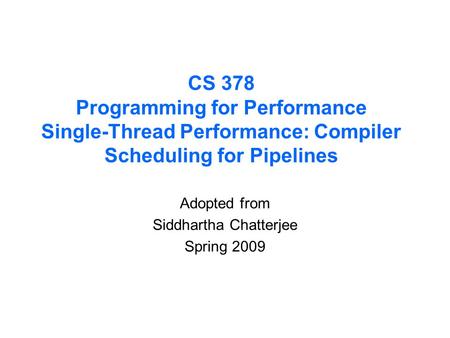 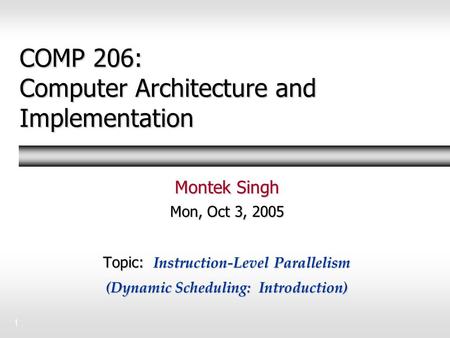 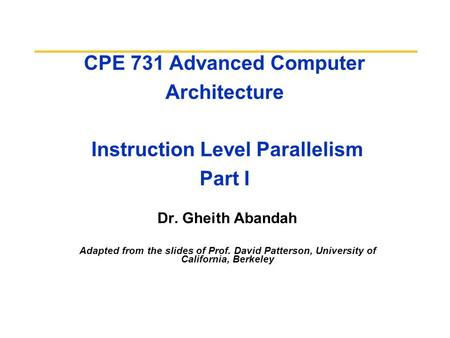 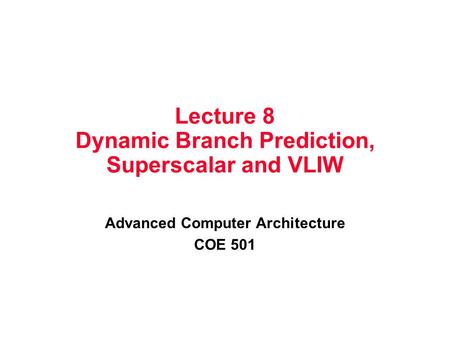 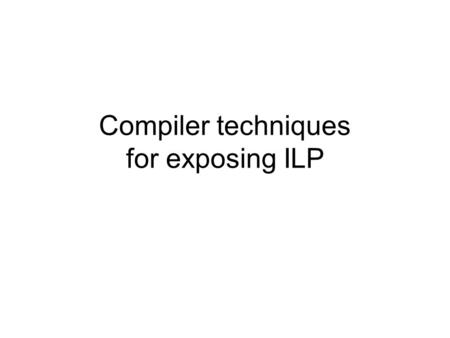 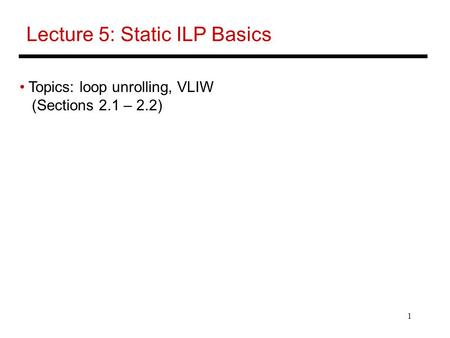 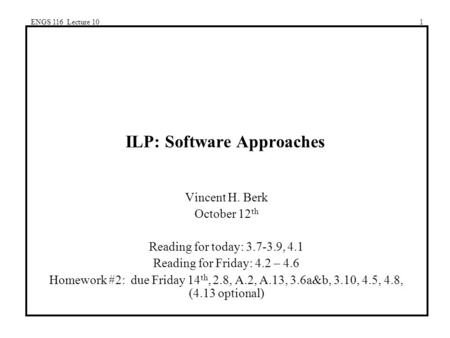 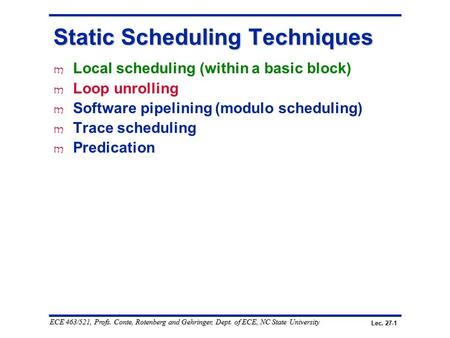 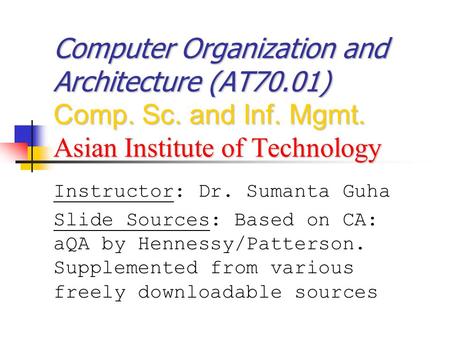 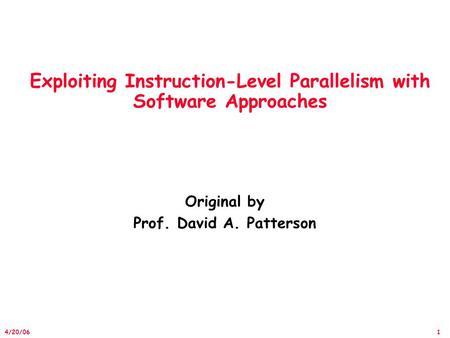 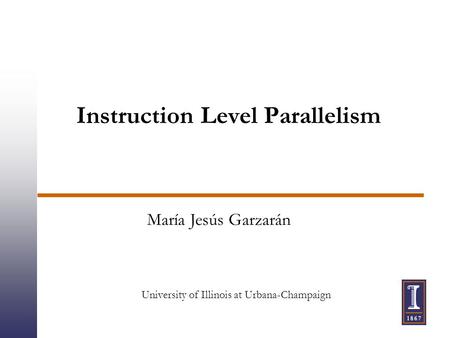 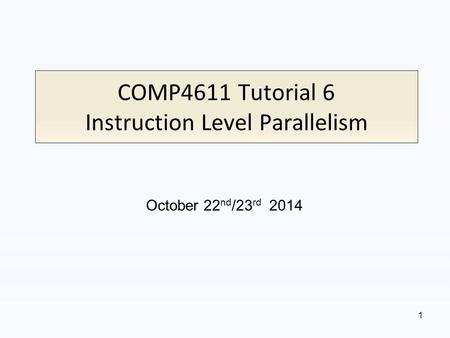 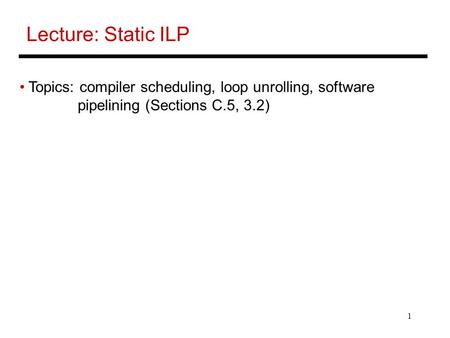 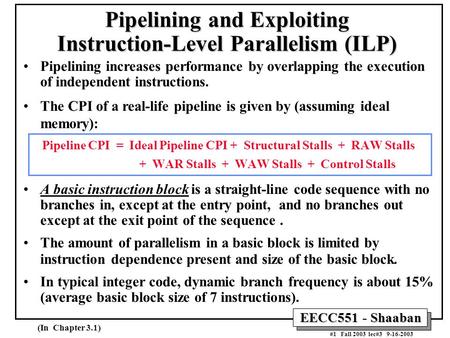 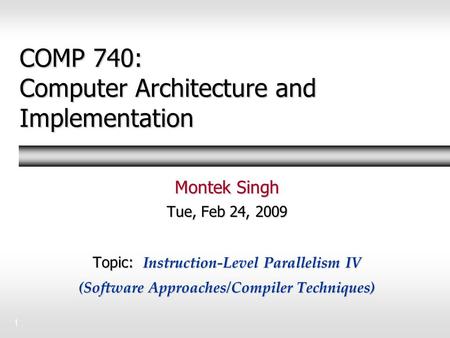 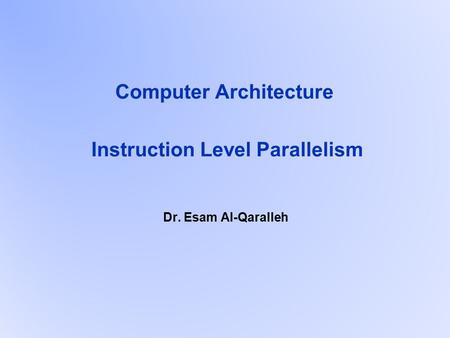 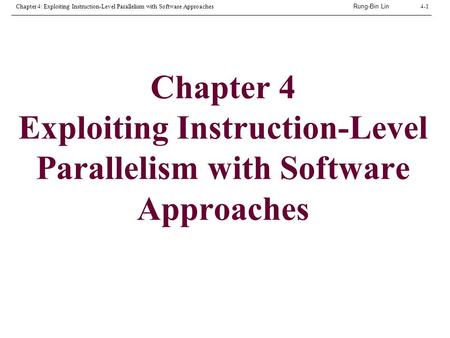 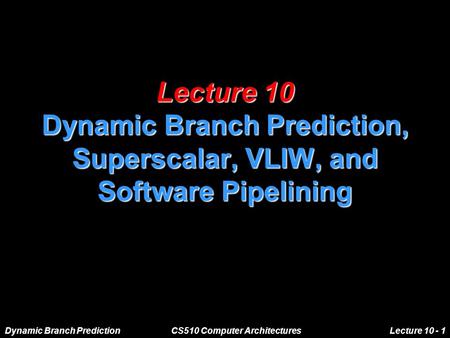