2 Introduction to Excel 20022 This lesson will cover: Creating Simple Calculations Using Cell References Editing Formulas Inserting and Using Functions: SUM, MAX, MIN, AVERAGE and MEDIAN COUNT and COUNTA IF Naming Cells and Cell Ranges These topics are from Chapter 4 of the text... Formulas, Functions and References

3 Introduction to Excel 20023 Using Simple Calculations… Calculation is the process of computing formulas and then displaying the results as values in the cells that contain the formulas.formulas Formulas can be simple like: =(4 + 5)*2 Or, they can contain cell references: =(A2+B5)*2 Or, they can use some of Excel’s built in functions: =PI()*POWER(4,2) you could also use =3.1416 *(4^2) * Remember, that any values that are to be calculated begin with the equal sign (=)

4 Introduction to Excel 20024 Using Simple Calculations… Since the next topic will be cell references we can start off easy. To use a simple calculation: Click the cell in which you want to enter the formula. Type an equal sign (=). This tells Excel that the following text is a formula. Enter the formula. Press the Enter key. For example, to use the formula (or calculation) 3.1416 *(4^2), which would be the circumference of a circle with a radius of 4…

5 Introduction to Excel 20025 Click on cell A1, then enter an equal sign (=) followed by the formula: 3.1416*(4^2)… Note that the same text is being entered into the actual cell. When you press the Enter key or click the green checkmark on the formula bar: The formula remains in the Formula bar, but the value displayed in cell A1 is now the result of the formula… 50.2656. Using Simple Calculations…

6 Introduction to Excel 20026 Using Simple Calculations… Important things to remember about calculations in Excel workbooks: Excel stores and calculates with 15 significant digits of precision, that’s a number like 100,000,000,000,000 or.000000000000001 Excel calculates stored, not displayed, values. For example, a cell that displays a date as "6/22/2001" also contains a number that is the stored value for the date in the cell. That number is what is actually calculated if it is used in a formula. Excel cannot automatically calculate a formula that refers to the cell — either directly or indirectly — that contains the formula. This is called a circular reference. If a formula refers back to one of its own cells, you must determine how many times the formula should recalculate. A circular reference is not a good thing!

7 Introduction to Excel 20027 Using Simple Calculations… By default, Microsoft Excel automatically recalculates formulas when the cells that the formula depends on have changed. You can change when the recalculation will occur: On the Tools menu, click Options, and then click the Calculation tab. Under Calculation, select an option. Changing this option affects all open workbooks. If you select an option other than Automatic, press F9 to calculate all worksheets in all open workbooks. To calculate only the active worksheet, press SHIFT+F9.

8 Introduction to Excel 20028 How to use References… A reference identifies a cell or a range of cells on a worksheet and tells Excel where to look for the values or data you want to use in a formula. With references, you can: use data contained in different parts of a worksheet use the value from one cell in several formulas. refer to cells on other worksheets in the same workbook, refer to cells in other workbooks refer to data in other programs * References to cells in other workbooks are called external references. ** References to data in other programs are called remote references.

12 Introduction to Excel 200212 Mixing Reference Types… You can mix relative and absolute references in the same cell reference depending on what reference you want to hold constant. Such as: =$A1*B2 Absolute Reference to column A and Relative Reference to row 1 times B2

14 Introduction to Excel 200214 Editing Formulas… To edit an existing formula: Click on the cell that contains the formula… …and then click in the Formula bar to place your cursor in the editing box. You can now edit the text just as you would any other text. Remember to click the check mark or press the Enter key when you are done!

15 Introduction to Excel 200215 Editing Formulas … Note that the cells included in the formula become highlighted in colors that match the color of their reference in the Formula bar. The red X next to the green checkmark is the “Cancel” button. Use this if you have hopelessly messed up a formula…it happens! The “down” arrow to the right of the red X on the Formula bar displays a list of the recently used functions. But that is another topic…

16 Introduction to Excel 200216 Editing Formulas … When you are editing a formula, be careful not to click out of the formula bar and on to the worksheet. If you do you will add the address of the cell you select (see the bottom figure). This is good if you want to add the address to your formula, and it happens by design. However, for a novice Excel user this usually is the time to click the Cancel button…

17 Introduction to Excel 200217 Using Functions… FunctionsFunctions are predefined formulas that perform calculations by using specific values, called arguments, in a particular order, or structure. For example, the SUM function adds values or ranges of cells, and the PMT function calculates the loan payments based on an interest rate, the length of the loan, and the principal amount of the loan.arguments Arguments can be numbers, text, logical values such as TRUE or FALSE, arrays, error values such as #N/A, or cell references.logical The structure of a function begins with the function name, followed by an opening parenthesis, the arguments for the function separated by commas, and a closing parenthesis.

19 Introduction to Excel 200219 To Insert a function into a cell: Select the cell where you want the function to display its results Select the Insert menu command from the main menu Select Function. This will display the Paste Function dialog…

20 Introduction to Excel 200220 The Insert Function dialog box is really a wizard of sorts…at least the gateway to a wizard…after it opens select a Function Category…“Most Recently Used” is selected here, it shows the functions that were used recently by Excel. To view the available functions select a category from the list box and scroll through the function names in the bottom list.

21 Introduction to Excel 200221 The POWER function is selected here. As you highlight, or select, function names in the list box; an explanation of the Return value, the Arguments and the Structure of the selected function is displayed.

22 Introduction to Excel 200222 Selecting the AVERAGE function displays the function wizard. The wizard guesses which cell references you want to use as the function’s arguments. If these are the correct cells click the OK button, if not enter new ones. You can enter a new cell or range of cells by selecting them from the worksheet while the wizard is displayed. This will change the values in the wizard. If you click OK with the current arguments… Notice that the wizard displays the result of the function based on the current arguments.

24 Introduction to Excel 200224 …this is in the wrong place, the Average should be displayed in cell F15…we need to cut and paste the formula…

27 Introduction to Excel 200227 The SUM function can be accessed through the Function wizard as shown earlier, and by using the AutoSum button on the Standard toolbar. To create a sum or total of a range of cell using this feature: Select the cell where you want to insert the sum and click AutoSum Excel suggests a formula based on the cells above or to the right that contain numerical values. To accept the formula, press Enter. To change the suggested formula (cell references), select the range you want to total and press Enter. Using AutoSum Σ The AutoSum button is located on the Standard toolbar

28 Introduction to Excel 200228 If you highlight cell E15 on this worksheet and press the AutoSum button, Excel selects the range of cells above it that contain numerical values (E3 through E14). If this is what you want press the Enter button on the formula bar to confirm and enter the formula. AutoSum button

36 Introduction to Excel 200236 Using Functions… COUNTA Syntax: COUNTA(value1,value2,...) Value1, value2,... are 1 to 30 arguments representing the values you want to count. COUNTA considers a value to be any type of information such as text, dates, times, all number types, error values and logical values (such as TRUE and FALSE). It includes empty text (“ ”), but not empty cells or arrays in its count. If you do not need to count logical values, text, or error values, use the COUNT function.

39 Introduction to Excel 200239 Using Functions…IF Example: On a worksheet, cell A10 contains a formula to calculate the current budget. If the result of the formula in A10 is less than or equal to 100, then the following function displays "Within budget” in the cell that contains the function. Otherwise, the function displays “Over budget”. IF(A10<=100,"Within budget","Over budget")

41 Introduction to Excel 200241 Defining and Using Cell Names Naming cells (or ranges of cells) in Excel makes it easier to navigate through your workbook and to understand what the spreadsheet is trying to present. You can use a text name to describe what the cell represents or just make it easier to select from the “Name box”. **A descriptive name can also be given to a formula to make it easier to understand. For example, the formula =SUM(FirstQuarterSales) might be easier to identify than =SUM(Sales!C20:C30). In this example, the name FirstQuarterSales represents the range C20:C30 on the worksheet named Sales.

42 Introduction to Excel 200242 Defining and Using Cell Names Selecting or Moving to a specifically named cell can be accomplished from the “Name box” as shown below…select the name from the drop-down list and that cell or range of cells will become active.

43 Introduction to Excel 200243 Defining and Using Cell Names To Define a cell name: Select the cell or range of cells that you want to name. Click the Name box at the left end of the formula bar. Type in the name of the cell(s). Press Enter. To name this cell Type the name here…

45 Introduction to Excel 200245 Defining and Using Cell Names When the Define Name dialog box appears: Type in the name that you want to use. Press the OK button The “Refers to:” text box shows the cell(s) that you are naming. You can chose another cell or range of cells by clicking the button at the end of the box. Names can also be deleted from this dialog box by clicking the Delete button. 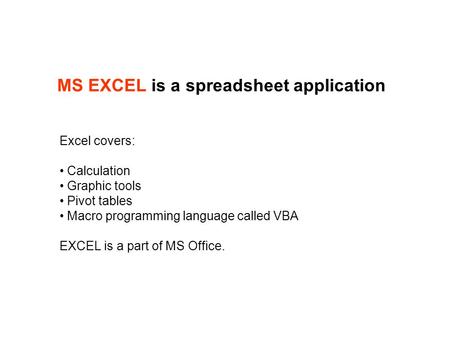 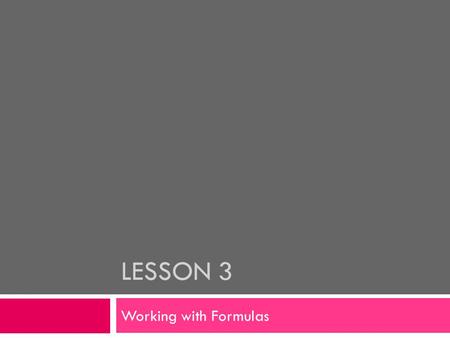 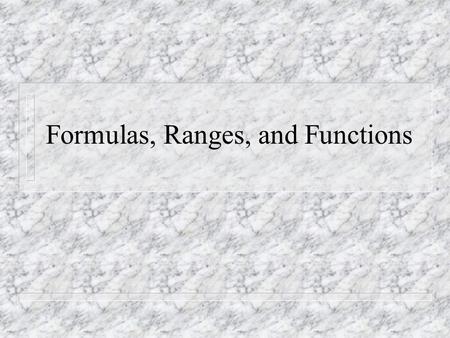 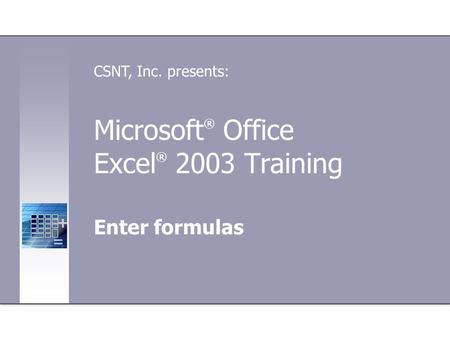 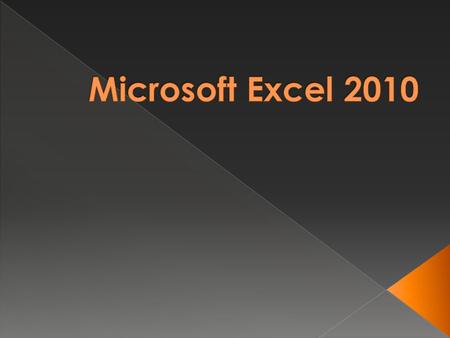  Microsoft Excel is an electronic spreadsheet.  As with a paper spreadsheet, you can use Excel to organize your data into rows and columns and to perform. 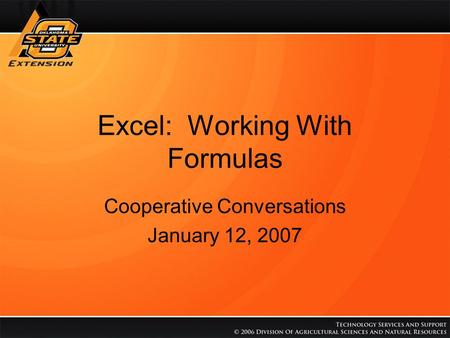 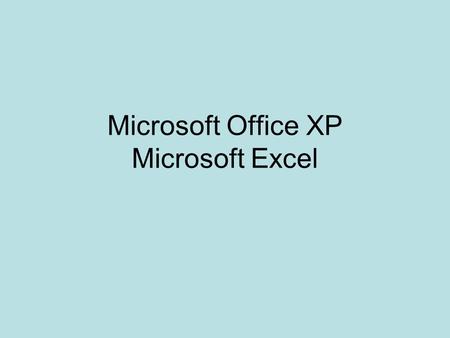 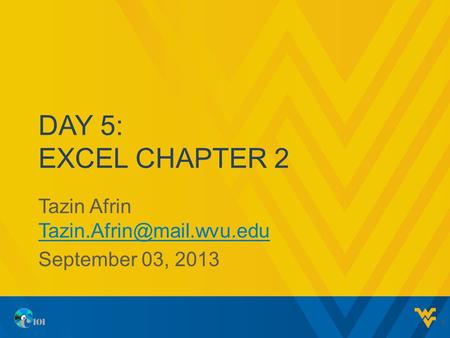 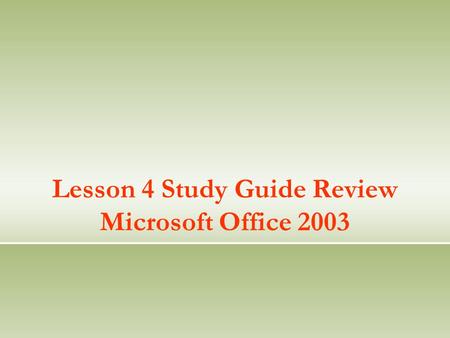 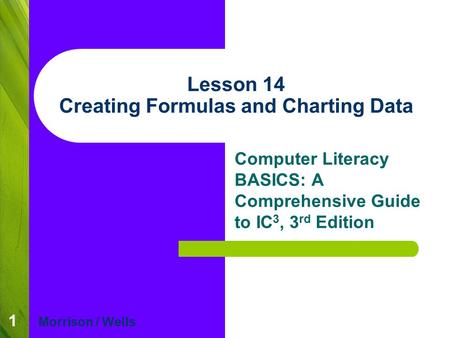 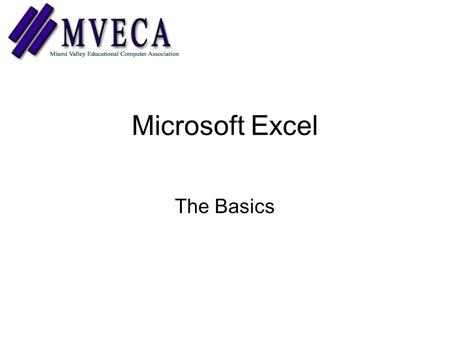 Microsoft Excel The Basics. spreadsheet A type of application program which manipulates numerical and string data in rows and columns of cells. The value. 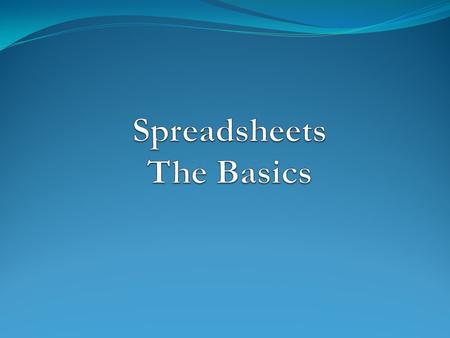 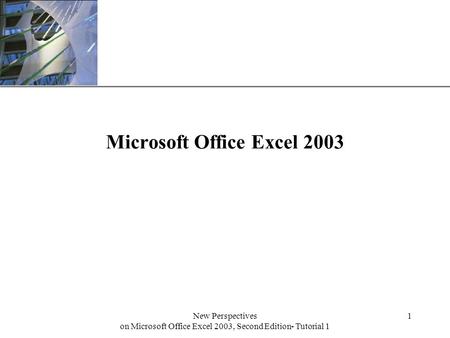 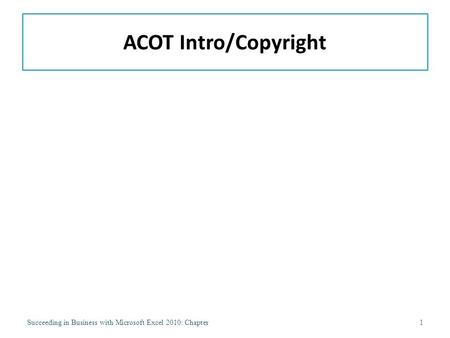 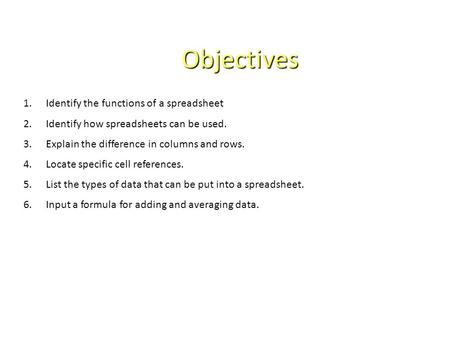 Objectives 1.Identify the functions of a spreadsheet 2.Identify how spreadsheets can be used. 3.Explain the difference in columns and rows. 4.Locate specific. 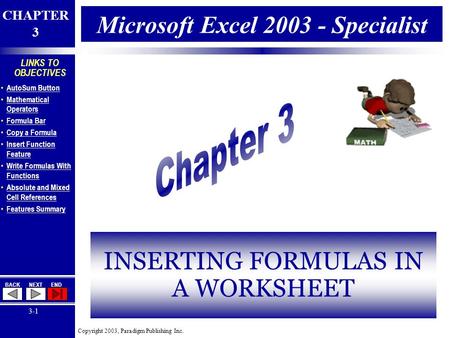 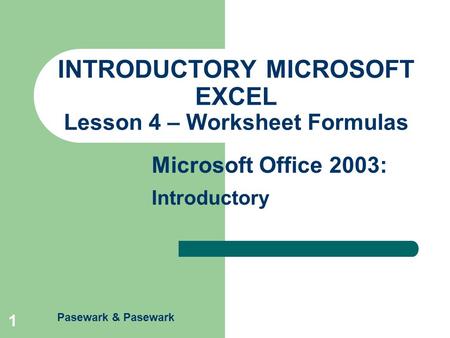 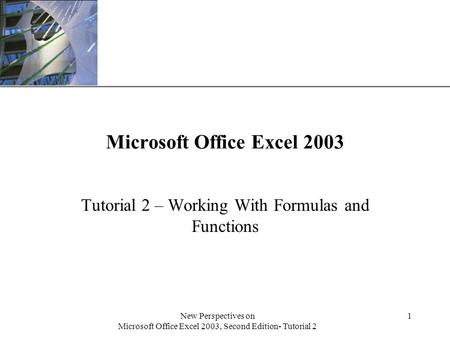 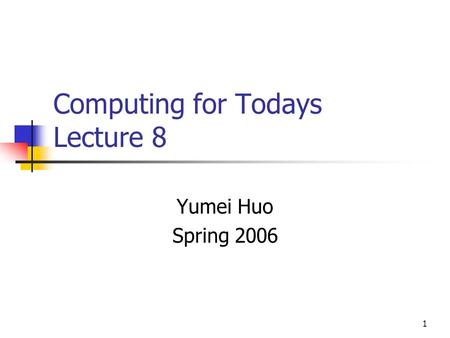 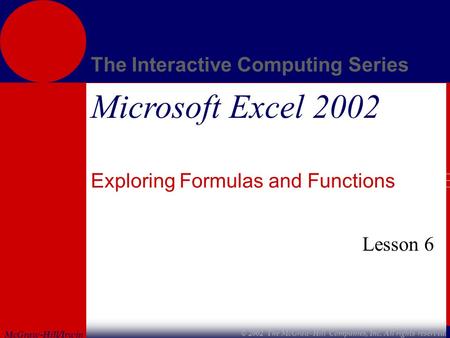