2 George Gershwin was born in New York City in 1898. He became one of America’s greatest composers. He is known for his beautiful, exciting concert pieces, as well as for the popular music he wrote for plays and movies.

3 George was one of the first composers to mix symphonic music with JAZZ the popular music of the day. He came up with a whole new American sound. At the time George was born, America didn’t really have a serious classical music style of its own. Most American composers borrowed ideas from the great European composers like Beethoven, Bach, and Chopin.

4 When George was little, New York was a pretty rough and tough place to grow up in. Neighborhoods were crowded and there weren’t may parks or playgrounds. So kids had to play in the streets. George loved stickball and street hockey. He was also one of the best roller skaters around.

5 George didn’t seem to have much of an interest in music until one day when he was seven or eight years old. George was roller-skating through the neighborhood of Harlem. From all the restaurants and clubs George heard the exciting, lively beat of the jazz bands playing. George returned often to listen.

6 A short time later, George heard some classical violin music being played from an open window. He loved the beautiful sound. He decided he would learn everything he could about music right away.

7 George started going to free concerts, where he enjoyed listening to classical music. He even experimented with making up his own songs on a friend’s piano. When George was twelve his parents bought a piano for George’s older brother, Ira. Everyone was surprised when George started playing the piano as soon as he saw it.

8 George was lucky to find excellent piano teachers when he started taking lessons. By the time he was fifteen, he was good enough to get a job playing the piano. Soon he was playing in an area of New York Cit call Tin Pan Alley. Singers and show business people would stop by to listen to new songs. George got to meet many famous, important people.

9 George’s songs were so lively and fun to listen to that it wasn’t long before one of them became a big hit. It was called “Swanee”. A famous singer of the day, Al Jolson, decided to sing it in his Broadway show. From then on George found it easier to get jobs writing his own music.

10 George sometimes asked his brother Ira to write words for his songs. Even though George and Ira were very different types of people hardly anyone worked better together when it came to making music.

11 Both George and Ira enjoyed painting too. Next to music, painting was George’s favorite thing to do.

12 A popular jazz bandleader named Paul Whitman asked George to write a symphonic jazz style piece for a concert. George wanted his music to have the sounds of modern America. George wrote parts of the song while on a train trip. The noise of the steel wheels on the tracks and the train’s clickety- clack rhythm gave George lots of ideas for his music. George call his new song Rhapsody in Blue.

13 Paul Whitman’s famous concert took place on February 12, 1924. The concert hall was packed and people all over the country listened on the radio. Rhapsody in Blue began with a clarinet making a long, whooping, laughing kind of sound that had never been heard before. Next the orchestra joined in and finally, George began playing the piano. When it was over people couldn’t stop clapping. They loved it!

15 Rhapsody in Blue made George Gershwin famous all over the world. He went on to write a lot more music for the theater and movies, much of it with his brother Ira. Many of their songs are still popular today such as An American in Paris.

16 George Gershwin’s favorite musical piece was his opera Porgy and Bess. This opera was different from other operas and was about poor African-American fishermen who lived in a waterfront area of South Carolina called Catfish Row. George traveled to South Carolina and stayed near the people so he could learn more about them and make their music really authentic.

17 When Porgy and Bess first played in New York City, some people didn’t like it. George explained that this was a new kind of opera– a folk opera. It was about real, everyday people. Sometimes the songs were fun, other times they were serious or sad. Over the years people began to understand Porgy and Bess. Today it is one of the world’s most popular operas.

19 Sometimes George used other things besides instruments to get just the right mood or sound. In An American in Paris, he used real taxi horns. In Second Rhapsody, he even used a fly swatter.

20 In early June 1937, Gershwin collapsed while working on the score of The Goldwyn Follies in Hollywood, and was rushed to the hospital. He died only two days later on July 11 at the age of 38 at Cedars of Lebanon Hospital following surgery for the tumor. His music sounds as new and exciting today as it did when he first wrote it. 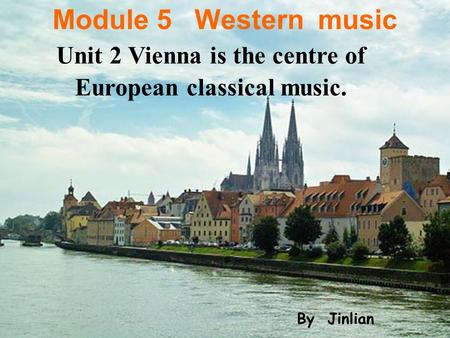 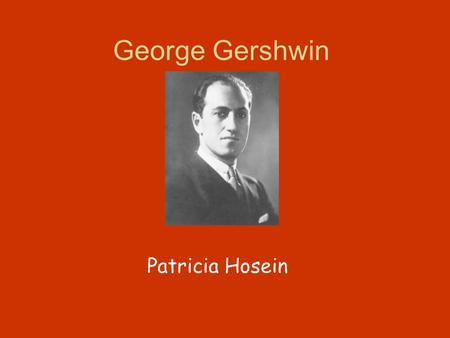 George Gershwin Patricia Hosein. Gershwins Youth George Gershwin was born in Brooklyn New York on the 26th of September in 1898 to Russian immigrants. 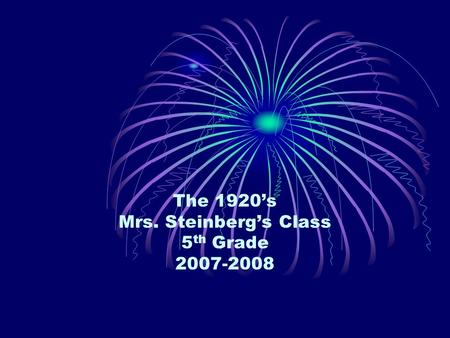 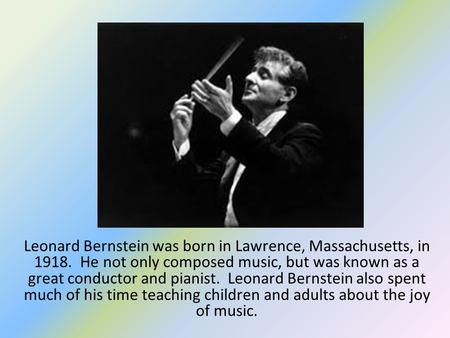 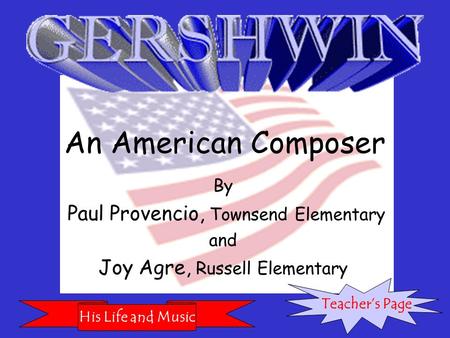 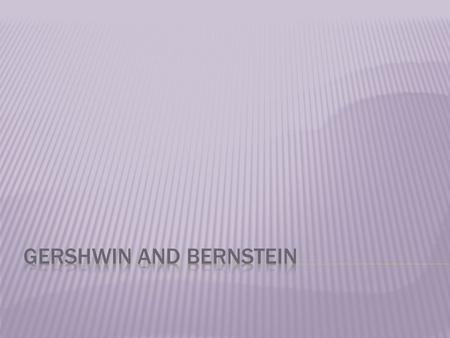  Gershwin was primarily a composer of popular songs and a jazz pianist.  He was also attracted to works for the concert hall and composed four pieces. 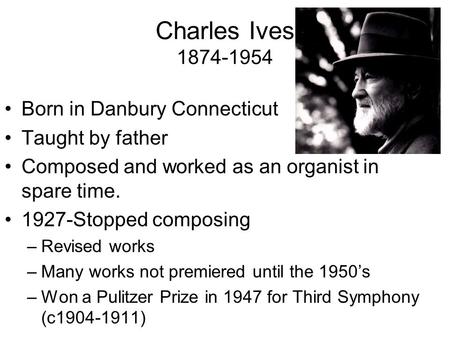 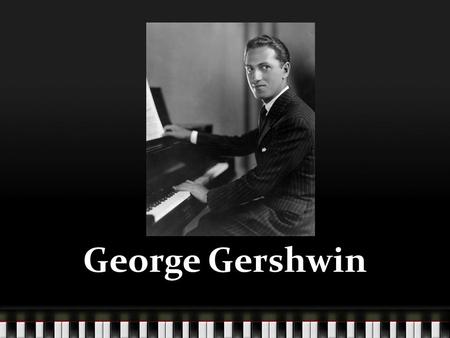 George Gershwin. His Family His father immigrated from Russia to the US in His father Morris was looking to find a girl, Rose Bruskin, that he met.