3 20.2 – WORLD WAR II BEGINS In 1935 Hitler began to violate the Treaty of Versailles: Germany began building a new air force Began a draft to increase the size of the army Why didn’t the European nations stop him at this time?

4 ANSCHLUSS In 1937 Hitler called for the unification of all German speaking peoples, including those in Austria and Czechoslovakia 1938 – Hitler sent troops into Austria and announces the Anschluss (unification) of Austria and Germany

5 MUNICH CRISIS - SUDETENLAND
1938 – Hitler announced German claims to the Sudetenland German-speaking area in Czechoslovakia At the Munich Conference G.B. and France agreed to Hitler’s demands Appeasement? Why did G.B. and France do this?

6 DANZIG 1938 – Hitler demanded that Danzig, Poland be returned to Germany Great Britain and France decided enough was enough, would go to war with Poland if Poland fought back Hitler ordered his army to prepare for a German invasion and began negotiations with the USSR (why?)

10 WORLD WAR II BEGINS W. Europe was quiet as British and French troops waited behind the Maginot Line Defensive along Fr./Ger. border Big mistake, why? Germans went around the ML into Luxembourg and Belgium; F and B troops were trapped in Belgium Video clip

11 MIRACLE AT DUNKIRK 338,000 British and French troops were evacuated from the port at Dunkirk and sent across the English Channel in early June, 1940 Video clip

13 BRITISH RESISTANCE TO GERMANY
GB was led by Prime Minister Winston Churchill Germany bombs London, hoping to break the will of the people and force a surrender (video clip) Battle of Britain (summer – fall of 1940) – massive air battle between GB and Germany Both sides bombed civilians in cities British used radar Hitler called off the invasion of GB 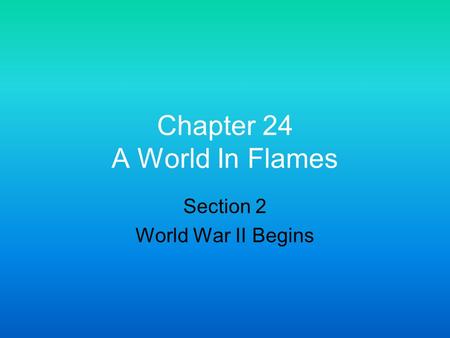 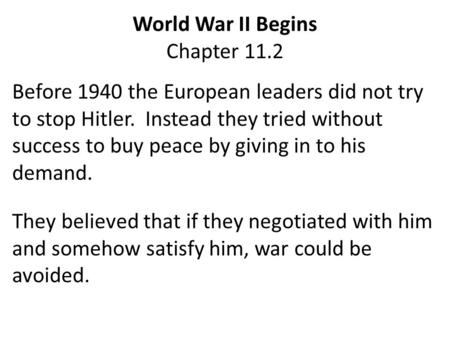 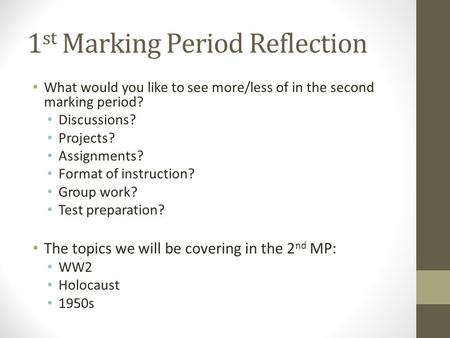 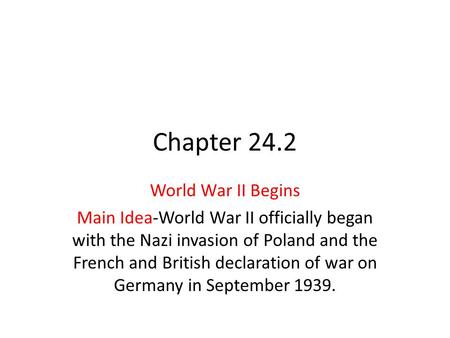 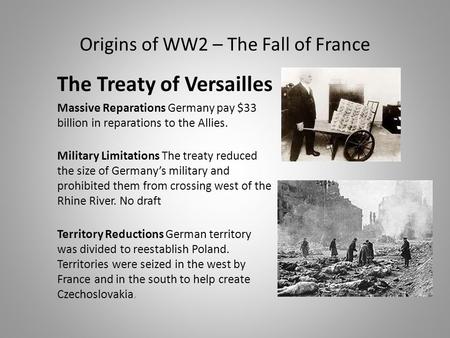