Chrétien de Troyes and Arthurian Romance. How Does Romance Differ from (Pseudo- )Chronicle?

2 How Does Romance Differ from (Pseudo- )Chronicle?

3 Romance tells of adventures, not of survival The hero is wealthy and privileged The hero quests voluntarily Action has no real exterior motivation The hero fights to test and prove the values of chivalry. He also fights in service to a lady He is the lady’s lover and follows the rules of courtly love. Elements of the “marvelous” or supernatural occur Geography and time are unreal The hero’s successes are vital to his identity and self-realization The hero’s inner consciousness is explored

4 Why Does the Arthurian Story Change Genres?

5 Arthur gets transplanted to France Once removed from the British, the story loses nationalistic characteristics After losing these, it becomes concerned with social fashion instead of heroic acts

8 Vulgate Cycle How does it expand Chrétien’s story of the Grail? In Chrétien’s romance, the grail is vaguely mysterious and associated with the wounded Fisher King In the Vulgate, the grail is the object of a quest for spiritual perfection Arthur’s knights will fail Galahad is introduced to win the grail

9 Alliterative Morte Arthure Draws much on Geoffrey of Monmouth and the epic, pseudo-chronological tradition Deals with the last days of Arthur and the end of the Round Table Is heroic, martial, focused on war Women are mostly absent or are wives and/or mothers of dynasties

10 Stanzaic Morte Arthur Derives from the French Tradition: the Vulgate Has as its purpose to show that the failure of the Grail Quest marked the failure of the Round Table At the end, the only recourse is to religion Everyone left alive retreats to a monastery. Serves as important source for Malory Focuses on the expression of powerful feeling.

11 Tone in Chrétien Where does Chrétien seem funny? Where does he seem serious? What might be the purpose of his tone?

12 Knight of the Cart: Lancelot Marie de Champagne was patroness to both Andreas Capellanus and Chrétien. Which of the Rules of Courtly Love are invoked in the Lancelot story? What is your sense of Sir Kay in Chrétien’s Lancelot? Does this differ from Malory? The queen grants Kay a “rash boon” at the start of the story. Where else do you see these? Why does Lancelot hesitate to get into the cart? How does Gawain behave as a foil for Lancelot?

13 Knight of the Cart: Lancelot Completion of the story left to Godefroy de Lagny. One instance of jousting occurs on p. 218. Find other examples. Why such repetition? Chrétien claims his source for the story was Marie de Champagne who would likely have obtained it from Celtic abduction stories. Is this believable? What meaning might be attached to Lancelot’s discovery of the future tombs of Gawain and others, including his own? What are Lancelot and Guinever like at the start of the story? Does either or do both change?

14 The Story of the Grail: Perceval Chrétien is the first to mention the Grail, the Bleeding Lance, and the Fisher King The story’s origin is argued. It does combine supernatural and mystic elements with “keenly observed contemporary social behavior” (Kibler 11) Perceval has no idea of his noble lineage Perceval is instinctually capable of chivalric acts Perceval’s meditation on three drops of blood get attached to his religious experience by writers, but they are focused on a lady, not God. Gawain is a secular foil to Perceval Does Chrétien’s tone in the Grail story differ significantly from his tone in the Lancelot story? If so, why might this be? Chrétien’s descriptions of nature and of human-made artifacts are detailed, lush, realistic, and suggestive of mystery.

15 The Story of the Grail: Perceval What do the young Perceval’s exchanges with the knights and the maiden in the tent show about him? Why does Perceval fail in his first stay in the Grail Castle? What insight does Perceval show or fail to show with respect to his mother and her death? Is Perceval consistent in obeying the suggestions given to him on his quest?

17 Who Are Important 19 th Century Arthurians?

21 Who and Where is Arthur Now? 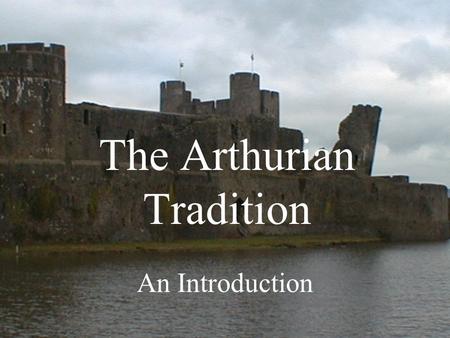 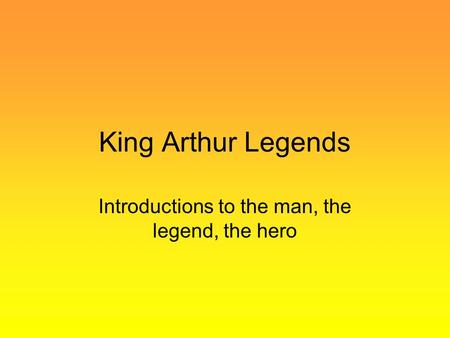 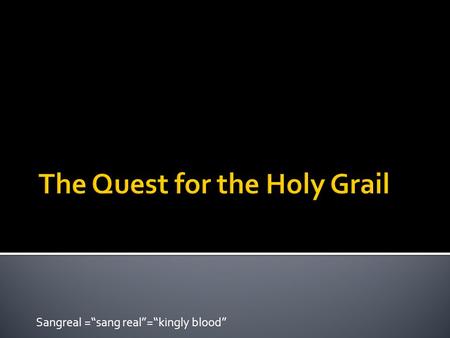 Sangreal =“sang real”=“kingly blood”.  The cup that Christ drank out of at The Last Supper and the cup that caught the blood of Christ as he hung on.