2 © IGD 2012 Introduction to food labelling What is the purpose of food labelling? Provide consumers with information about their food, helping them to make informed decisions about which food to buy It is important that this information is accurate and not misleading

4 © IGD 2012 Labelling legislation Food labelling is subject to strict requirements set out in European legislation. To comply with legislation, basic labelling provisions for pre-packaged foods must include: The name of the food (legal or customary name not the brand name) A list of ingredients Quantitative declaration of ingredients (QUID) may be required if the ingredient used is mentioned in the product name or emphasised by product information e.g chicken in chicken pie The appropriate date mark Any special storage conditions, conditions of use or preparation instructions The name or business name and an address or registered office of either or both of – (i) the manufacturer or packer, or (ii) a seller established within the European Community Particulars of the place of origin or provenance of the food if failure to give these might mislead a purchaser to a material degree as to the true origin or provenance of the food The weight or volume of the food

6 © IGD 2012 Labelling legislation (continued) Nutrition labelling The EU Regulation published in October 2011 on the provision of food information to consumers (Food Information Regulation) is mandatory and pre-packed products already providing nutrition and ingredient information will need to implement the following changes. – All packs with an area >25cm 2 will require nutrition information Where nutrition information is provided it must comply with the regulation and shall include: energy, total fat, saturates, carbohydrate, sugars, protein and salt Previously nutrition information was provided as either: i) energy, protein, carbohydrates and fat, (known as a 'Group 1' or 'Big 4' declaration) or ii) energy, protein, carbohydrates, sugars, fat, saturates, fibre and sodium (known as a 'Group 2', 'Big 4 + little 4' or '4 + 4' declaration) The transition period for implementing the new labelling format must be complete by December 2014

8 © IGD 2012 Ingredients list (continued) Additives An additive will be listed by the principal function it serves (e.g. emulsifier), followed by its name or E number Where an additive has been given an E number, this means that it has passed safety tests and has been approved for use in the UK and in the rest of Europe. This includes substances which occur naturally in foods and are used as additives. Compound ingredients Where an ingredient is made up of several other ingredients, all the individual ingredients will be given in the ingredients list either instead of, or in addition to, the name of the compound food Foods that do not need to provide a list of ingredients Single ingredient foods such, as butter and flour, do not need to give a list of ingredients, nor do alcoholic drinks (above 1.2% vol.)

10 © IGD 2012 Allergen labelling Labelling helps consumers avoid foods which could provoke an allergic reaction or food intolerance EU legislation (EU Directive 2000/13/EC) requires that 14 allergenic food ingredients, and derivatives, be declared on prepacked foods. These include: * Includes Brazil nuts, hazel nuts, almonds and walnuts. Pine nuts and coconuts are not classed as nuts so they are not listed as allergens. If these are present as an ingredient in the product they will be listed in the ingredients list It is worth noting that peanuts are not true tree nuts, so must ALWAYS be declared separately from true tree nuts Cereals containing gluten Molluscs Celery Mustard Crustaceans Nuts from trees* Eggs Peanuts Fish Sesame Lupin Soya Milk (including lactose) Sulphites > 10ppm

11 © IGD 2012 Allergen labelling (continued) Note: some highly processed ingredients that no longer contain allergenic proteins are exempt e.g. wheat based glucose syrup, fully refined soybean oil Where more than one ingredient or processing aid is derived from the same allergen e.g. skimmed milk powder and caseinates (both from milk), it would be necessary to make it clear for each ingredient concerned. Additionally any allergenic ingredients should be highlighted in a way that clearly distinguishes it from the rest of the list of ingredients.

12 © IGD 2012 Allergen labelling (continued) Gluten The composition and labelling of foods for people intolerant to gluten is governed by EU legislation The gluten content of any food labelled gluten free must not exceed 20 mg/kg Very low gluten claims can be made on foods, made from wheat, rye, barley and/or oats (or their crossbred varieties), that are specially processed to reduce the level of gluten to <=100 mg/kg These rules mean that the phrase 'suitable for coeliacs' can only be used alongside the terms 'gluten free' or 'very low gluten' and cannot be used on its own

15 © IGD 2012 Date marking (continued) Other date marks Best before and use by are the only forms of date marking required by law and are for use by consumers Best before and use by dates should not be confused with retailer markings such as sell by or display until which are instructions to shop staff Freezing food If a food can be frozen, its life can be extended beyond the use by date However, any instructions on the pack must be followed. For example, – freeze on day of purchase – cook from frozen – defrost thoroughly before use and use within 24 hours

16 © IGD 2012 Front of pack nutrition information Nutrition information can be provided on the front of food packaging to give consumers a quick guide to the nutrient content of the product. In October 2011 an EU Regulation on the provision of food information to consumers (Food Information Regulation) was published, stating that in addition to mandatory back of pack nutrition information, front of pack nutrition labelling may also be used. Two systems for front of pack labelling have been in existence since before development of the Food Information Regulation. These may change in the future. The two systems are: Guideline Daily Amounts (GDAs) and traffic light colour coding. Calories in one portion or serving of the food The percentage of your Guideline Daily Amount of calories that a portion of this food gives you Guideline Daily Amounts (GDAs) GDAs tell you the amount of calories, sugar, fat, saturated fat (saturates) and salt a portion of that food provides The information given on the front of pack is the quantity in grams of each nutrient provided by a portion of the food, and this quantity expressed as a percentage of the Guideline Daily Amount for that nutrient GDAs are a guide, not a target, and are based on an average person. Men and women have different requirements. GDAs are based on the requirements for an average woman

17 © IGD 2012 Front of pack nutrition information (continued) Traffic light colour coding Traffic light labelling is designed to show you at a glance whether a food is high, medium, or low in fat, saturated fat (saturates), salt and sugar Red: high Amber: medium Green: low More green traffic lights indicates the healthier choice An amber traffic light is not high or low, so you can eat foods with all or mostly amber lights most of the time A red traffic light means the food is high in fat, saturated fat, salt or sugars and these are the foods we should limit The colour coding is based on the content per 100g of the product. You may eat a lot more or a lot less than this depending on the product Per portion colour coding criteria should be used if the serving size is greater than 100g

19 © IGD 2012 Back of pack nutrition information (continued) In addition to this basic requirement some labels may carry information per portion For products that require further preparation but without the addition of other ingredients the information as consumed may be presented if appropriate cooking instructions are provided within the handling instructions The amount of nutrients can be declared as % Guideline Daily Amounts (GDA)* per portion. Energy is calculated using the formula: Kcals=(protein (g) x 4) + (carbohydrate (g) x 4) + (fat(g) x 9) + (fibre (g) x 2) KJ = (protein (g) x 17) + (carbohydrate (g) x 17) + (fat (g) x 37) + (fibre (g) x 8) Salt equivalent is calculated as follows: Sodium x 2.5 *GDA values are provided as Reference Intakes in the Food Information Regulation and the values differ slightly from UK GDAs.

20 © IGD 2012 Back of pack nutrition information (continued) Other nutrients may be added to the nutrient declaration on a voluntary basis including polyols, starch, monounsaturates, polyunsaturates, vitamins and minerals The new Food Information Regulation (FIR) guidance must be implemented by December 2014 and until then some products may display nutrition information in the following format. Some products may also list the Guideline Daily Amounts* with the % GDA per portion. Nutrition Information Typical Values 100g as sold Per sausage as sold Per sausage cooked Guideline Daily Amounts Adults % of GDA* per sausage Energy864kJ 207kcal 493kJ 118kcal 486kJ 116kcal20005.8 Protein10.2g5.8g5.9g4513 Carbohydrate13.6g7.7g7.6g2303 of which sugars3.1g1.8g0.3g900.3 Fat12.4g7.1g6.8g7010 of which saturates4.3g2.4g 2012 Fibre 0.4g0.2g0.4g241.5 Sodium 0.5g0.3g 2.413 Salt equivalent 1.4g0.8g 613 Example: Pork sausages that can be grilled *GDA values are provided as Reference Intakes in the Food Information Regulation and the values differ slightly from UK GDAs.

22 © IGD 2012 Nutrition claims Content claims e.g contains calcium, etc Can only be made if they are on a list in the Annex to regulation 1924/2006 Only the vitamins and minerals listed in the Regulation may be added to foods and must be present in sufficient quantity in the food to have beneficial effects No nutrition or health claims can be made for micronutrients with levels less than 15% RDA per serving as consumed Nutrition and health claims relating to beverages containing more than 1.2% alcohol are prohibited, except those which refer to a reduction in the alcohol or energy content Comparative claims e.g increased calcium, reduced fat etc May only be made between foods or drinks in the same category that are similar in terms of nutrition content or are alternatives for consumption (e.g. spread/butter) A comparative claim may only be made with food which itself cannot make the claim Any such claim, may only be made where the reduction in content is at least 30 % (micronutrients 10% difference; sodium/salt 25% difference) Nutrition claims state that a food has beneficial nutritional properties, e.g. low fat, no added sugar, high in fibre, etc

23 © IGD 2012 Health claims The European Food Safety Authority (EFSA) is responsible for verifying the scientific substantiation of health claims. The European Commission then decides whether to authorise the claim Most health claims are so called generic health claims, which means that they are scientifically well-established, e.g. calcium and strong bones. These may be used providing the product meets the conditions of use All other claims, including those for childrens development, and for disease risk reduction, must undergo a specific authorisation procedure Claims that a food prevents treats or cures a disease (Medicinal claims) are prohibited Health claims state that health benefits can result from consuming a given food, e.g. vitamin D aids calcium absorption for strong bones

24 © IGD 2012 Nutrition and health claims continued Conditions for the Use of Nutrition and Health Claims The European Commission will develop Nutrient Profiles with regard to levels of saturated fat, sugar and sodium Meeting the nutrient profile will be a condition in order to make nutrition or health claims 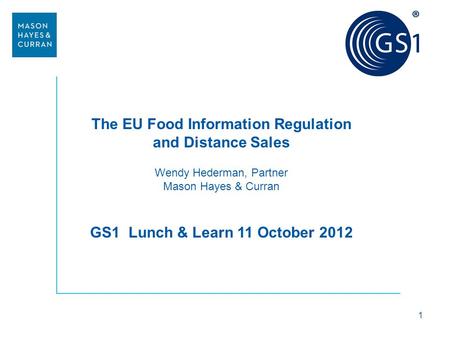 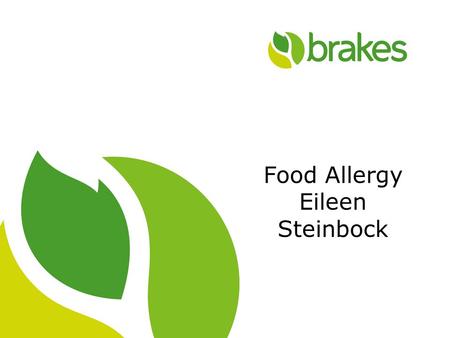 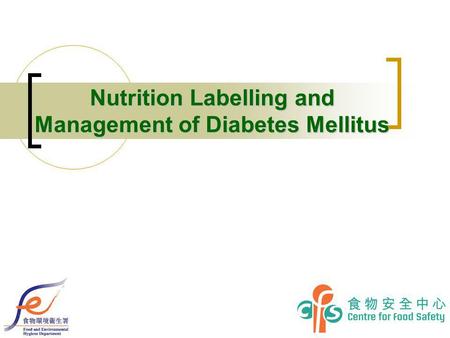 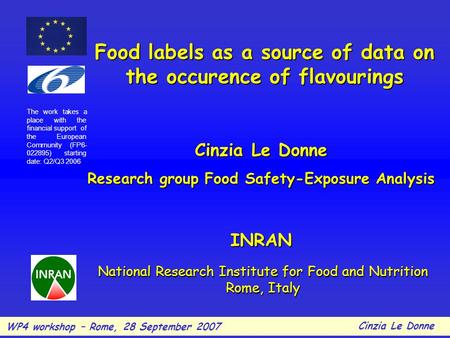 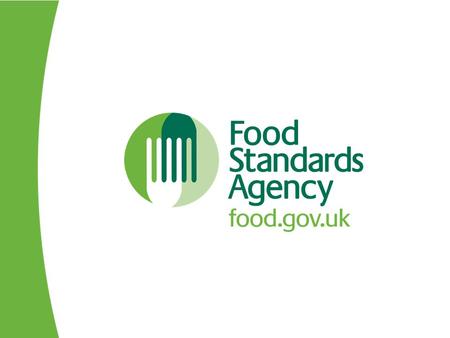 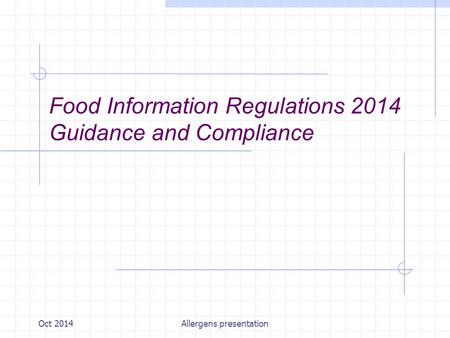 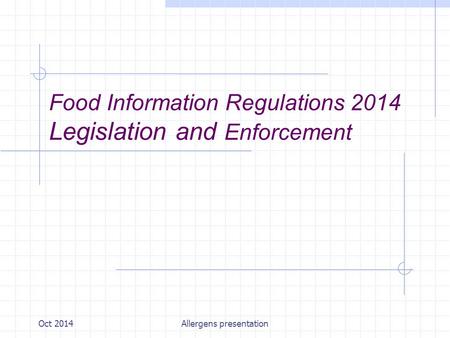 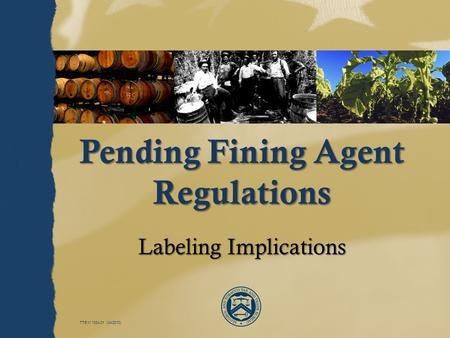 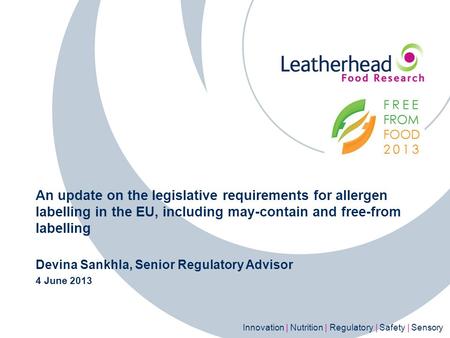 Innovation | Nutrition | Regulatory | Safety | Sensory An update on the legislative requirements for allergen labelling in the EU, including may-contain. 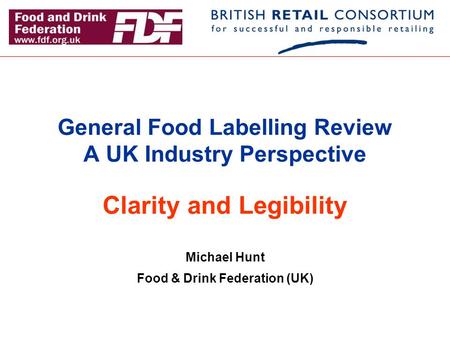 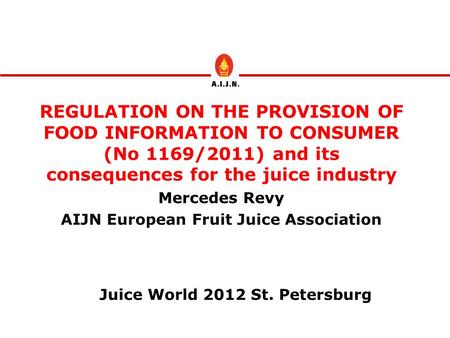 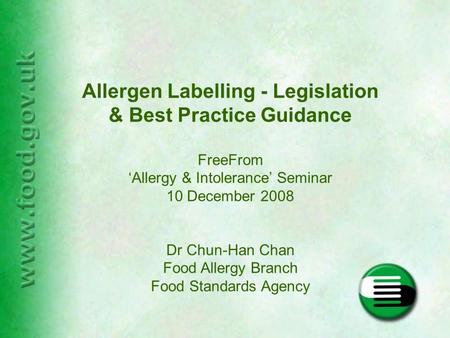 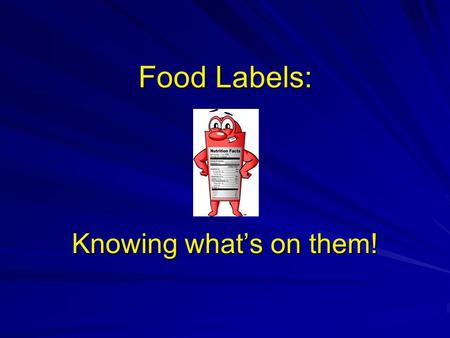 Food Labels: Knowing what’s on them!. What is a Food Label? It provides information from the food manufacturer to the consumer. It helps tell consumers. 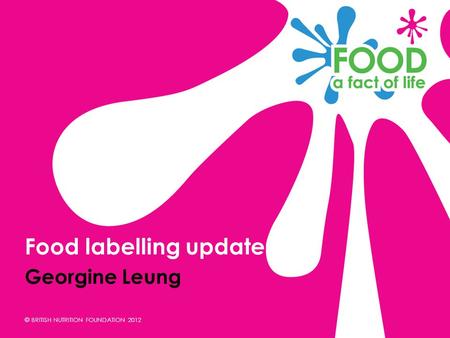 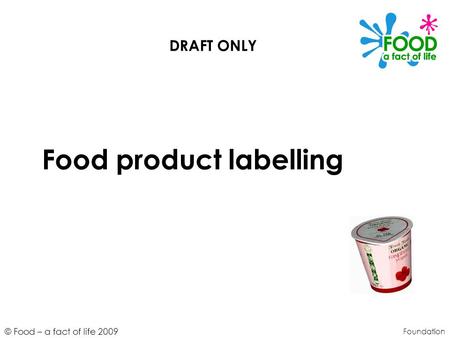 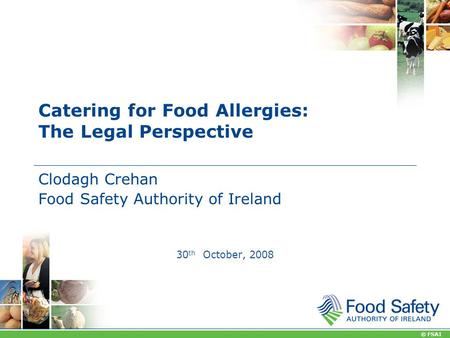 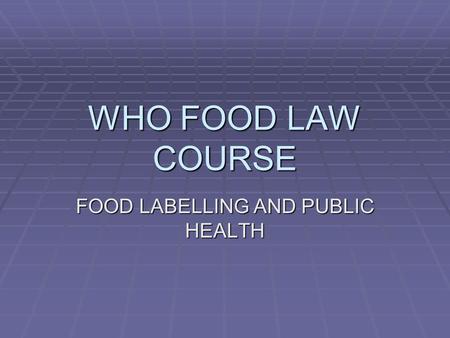 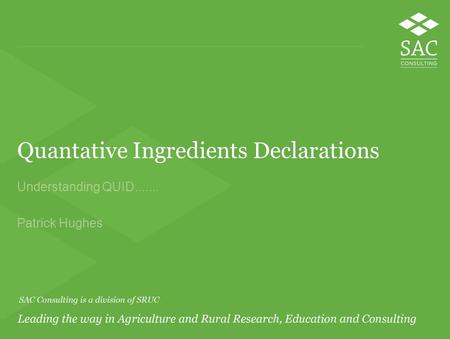 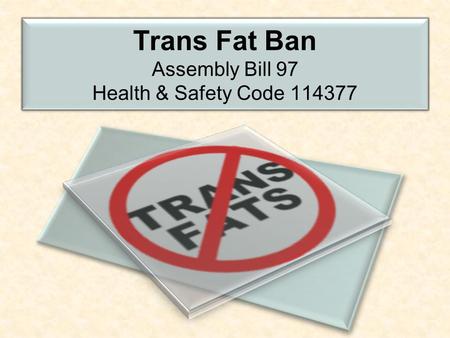 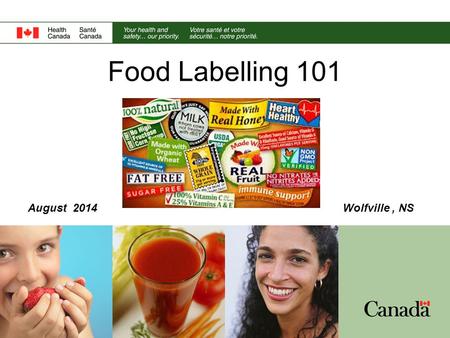